While Islamist terrorist groups such as Hamas and Hezbollah freely publish their hate messages on Twitter, critics of Islam have it increasingly difficult to speech.

Punished for saying that Islam encourages violence against homosexuals

Yesterday the website Genbeta reported the case of censorship suffered by a Spanish Twitter user who was suspended from his account for stating that Islam “actively encourages violence against gays.” The user @elsacodelcoco, from Valencia, had to delete that comment to be able to reactivate his account, because although he sent an appeal to Twitter, nobody read it, since he only received an automatic message in which Twitter did not respond to any of the points that he mentioned in his defense. Why does Twitter give the option to appeal if it does not even read the appeals?

A few days ago Twitter censored another Spanish user, @jensenalbertosw, for having posted a tweet in which he affirmed “Islam no es paz” (Islam is not peace). Yesterday, after opening a new account, the censored Twitter user posted a screenshot of the suspension notice sent to him by Twitter 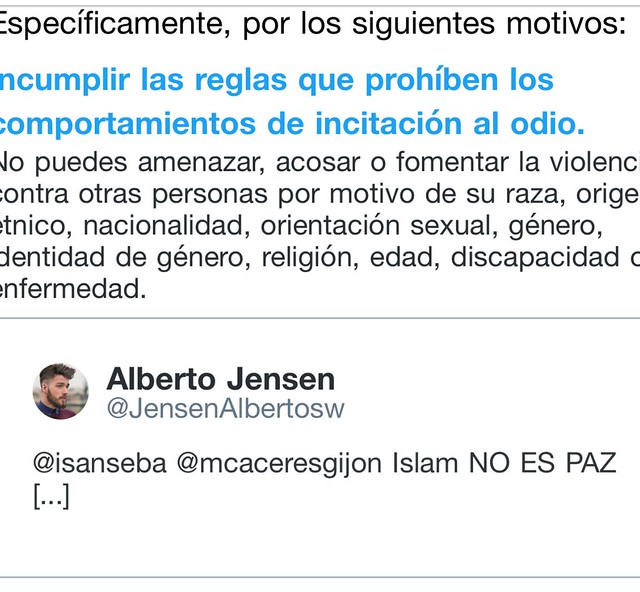 In the screenshot we see that Twitter classified the message of “Islam is not peace” as “incitement to hate”, despite being a legitimate opinion of that user about the aforementioned religion. The ironclad censorship of Twitter against criticism of Islam contrasts with its tolerance with hate messages against Christians and Jews: every day there are repeated in this social network all kinds of hateful messages, insults and even violent messages against Christians but Twitter do nothing.