Communists and Russian nationalists continue to deny the truth about Katyn

Katyn: the gross lies and communist denial of the massacre of 22,000 Poles

This Friday marks the 75th anniversary of the announcement, by Germany, of the discovery of mass graves in the Katyn forest, which contained the handcuffed corpses of thousands of Poles.

NOTICE: This article contains images that may hurt your sensitivity

The killing occurred because of an order signed by Stalin

As you recall, Germany and the USSR had invaded Poland in September 1939, dividing the country by virtue of the secret protocol attached to the Pact Ribbentrop-Molotov, a protocol by which Hitler and Stalin were divided Poland, the Baltic Republics and Finland. In the Soviet occupation zone the NKVD, Stalin’s secret police, installed prisons in Białystok, Grodno, Brześć, Głębokie, Wilejka, Baranowicze, Pińsk, Łuck, Równo, Drohobycz, Tarnopol, Stanisławów and Lwów. Thousands of Polish soldiers and civilians were imprisoned there, ranging from prisoners of war to members of the Polish resistance, including intellectuals, businessmen, priests and various elements that were labeled “counterrevolutionary.” On March 5, 1940 Stalin signed an order, drafted by Lavrenty Beria, head of the NKVD, ordering the execution of these prisoners, which took place in the months of April and May 1940. Stalin’s order specified the number of prisoners who were to be killed: 18,632. This figure included: 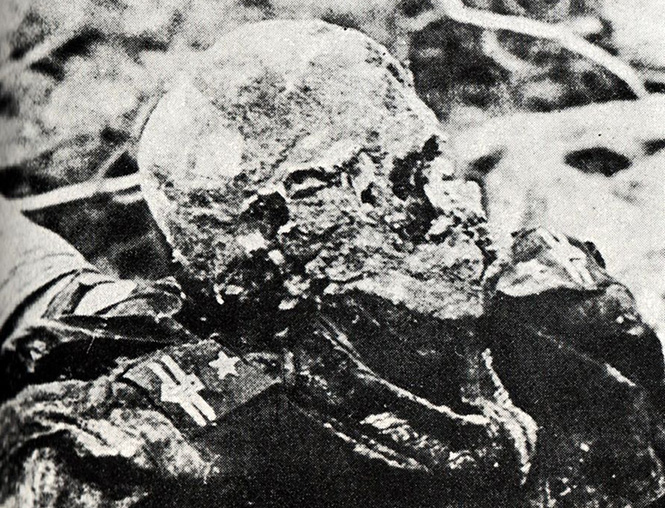 The Soviets organized the killing as a false flag operation

The killing of the prisoners was organized in three special camps: Kozelsk (more than 4,410 executed, according to Soviet documentation), Starobelsk (more than 3,739 executed) and Ostashkov (at least 6,314 executed). Finally, according to the data compiled by the Polish National Institute of Memory, at least 21,768 Polish prisoners were executed in Katyn, Kharkov, Smolensk, Kalinin, Moscow and other locations. The objective of the massacre was to liquidate the intellectual and social leadership of the Republic of Poland, so that the country would be easier to submit to the new communist authorities.

As I told you here in February, one of those responsible for the executions was the NKVD officer Vasily Blokhin, who is now considered the most prolific assassin in history: he personally murdered 7,000 Polish prisoners, most of them members of the State Police and the Polish Border Protection Corps, killed in the NKVD prison in Kalinin, their bodies being buried in common graves in Miednoje. For the executions German Walther pistols were used, which the Germans had delivered in large numbers to their Soviet allies in the invasion of Poland. Blokhin considered these pistols more reliable and comfortable than the Soviet Tokarev TT-30 for the mass execution of prisoners, but what determined the choice of those weapons was that they were the Gestapo’s statutory pistols, so that if the massacre were discovered, the USSR could blame Germany for the ballistics tests. We are, therefore, before a great slaughter that was planned by the Soviets as a false flag operation.

Stalin told Sikorski that the prisoners had fled to Manchuria

The discovery of the graves of the Katyn massacre was possible because the Germans invaded the USSR in 1941, and the places where the executions were perpetrated came under the control of the Third Reich. With the permission of the Germans, the Polish Red Cross examined the site, identifying more than 4,000 Polish officers who had been captured by the Soviets in 1939. The discovery of the graves caused a political earthquake on the Allied side. The Prime Minister of the Polish Government in exile, General Wladyslaw Sikorski, had traveled to Moscow on December 3, 1941 and had asked Stalin about the whereabouts of thousands of Polish officers who had been made by the prisoners in 1939 and that they had not returned to their homes. Stalin had lied to Sikorski, saying that those prisoners had escaped and gone to Manchuria, more than 6,000 kilometers from Poland. After knowing the discovery of the Katyn pits, the USSR changed its version and Stalin blamed the Germans for the massacre. 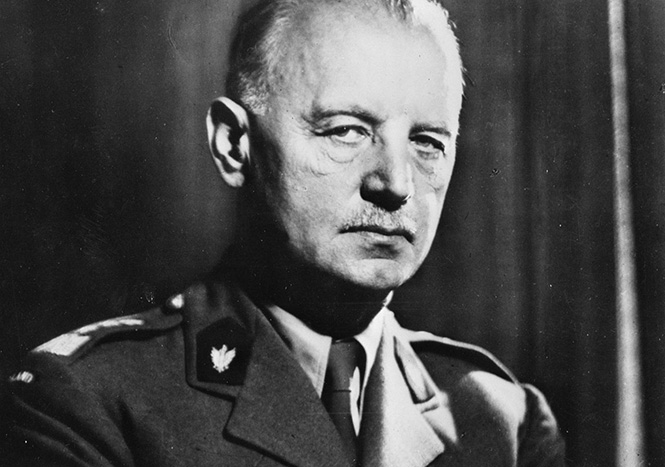 Sikorski met with the British Prime Minister, Winston Churchill, on April 15, 1943, indicating that there was evidence pointing to the Soviet authorship of the massacre. Churchill sided with Stalin and advised his Polish counterpart not to remove the matter, in an attempt not to stress the relations between the allies. However, Sir Owen O’Malley, British ambassador to the Polish Government in exile, sent his government a report on the Katyn massacre on May 24, 1943, confirming the guilt of the Soviets. The report was greeted with irritation by Churchill and his cabinet, which had decided to publicly support the Soviet version. The United States also took Stalin’s lie for good, even concealing several attempts to make the truth known, such as the Katyn report written by Lieutenant-Colonel John H. Van Vliet in 1945, which was classified and mysteriously disappeared from the archives of the Pentagon. The lieutenant colonel himself uncovered what happened in 1950.

The death of Sikorski in strange circumstances

Despite pressures from the British and the Americans, Sikorski asked the International Red Cross to carry out an investigation into what happened. Churchill and Roosevelt objected, believing that an investigation under German jurisdiction would not guarantee truthfulness. Following that request of Sikorski, the USSR broke diplomatic relations with the Polish Government in exile on April 25, 1943, accusing it of collaborating with the Germans. On July 4 Sikorski and his daughter died when their plane crashed as soon as they took off from Gibraltar, a fact that left the Polish Government in exile and the Polish military forces in the West decapitated. The strange circumstances of the accident, if it was, and how timely it was for Stalin make this even today one of the most controversial events of the World War II, without it being determined exactly what the plane crash was caused. The secret documents of the British Government about the accident will not be declassified until 2050. 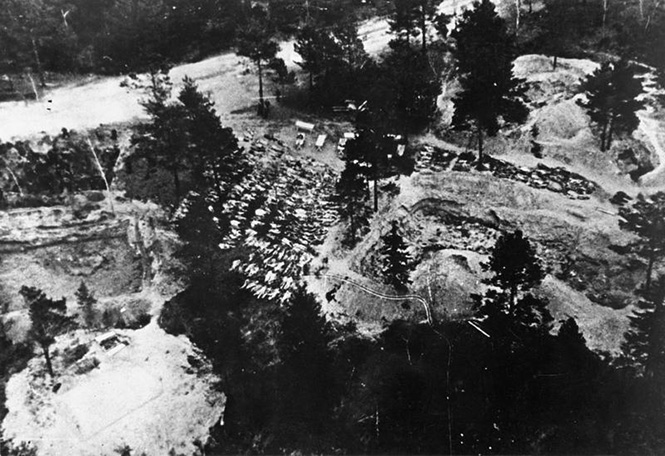 Aerial view of the pits of the Katyn forest, after its discovery in 1943

The communist dictatorship of Poland censored the truth for decades

After the end of the war, Stalin imposed in Poland a puppet government of the USSR. Although the Polish Communist Government knew the documents of the NKVD ordering the massacre of Polish prisoners, it insisted on continuing to support the Soviet version. The true version of what happened was subject to censorship and reprisals. The Encyclopedia of the Polish People’s Republic did not even include an entry on Katyn, and on the cross in tribute to the Katyn prisoners that was placed in the Powązki cemetery, in Warsaw, no date was inscribed, since the authentic one (1940 ) would have signaled the Soviets. Despite this, the defenders of the truth about what happened continued fighting to make it known. On March 21, 1980, there was a demonstration against the Katyn lies on Kraków’s Market Square, during which Walenty Badylak committed suicide; he was a former soldier of Armia Krajowa, the main Polish resistance organization, loyal to the Polish Government in exile.

The White House remained silent until the USSR recognized its authorship

In December 1952, the United States Congress organized a special commission on the Katyn massacre, which issued a document, the Madden report, in which it recognized Soviet authorship and recommended to the United States Government to present that case to the UN, something that it did not happen, since the White House was silent about it until the USSR recognized the facts, a totally incomprehensible attitude. As for the USSR, for decades it denied the truth about what happened and insisted on blaming the Germans. On April 13, 1990 the USSR finally admitted the truth and blamed what happened to Stalinism. During a visit by the Polish communist dictator Wojciech Jaruzelski to Moscow, Mikhail Gorbachev handed him documents from the Soviet archives which showed that the killing was committed by members of the Soviet NKVD. On August 25, 1993, after the fall of the Soviet Union, Russian President Boris Yeltsin apologized to Poland for the massacre during a visit to the Powązki cemetery in Warsaw. 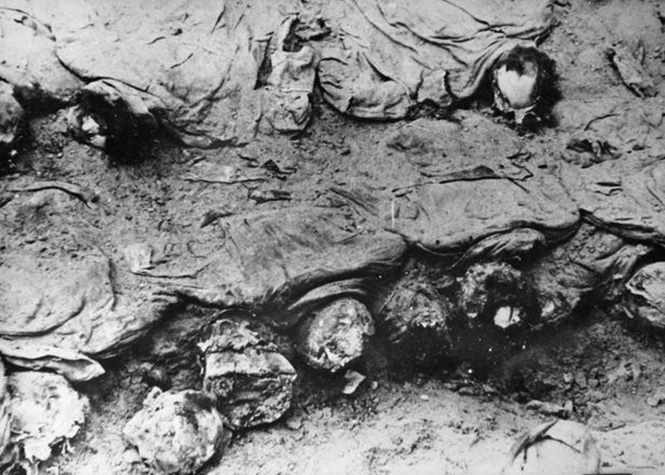 Corpses of the Polish officers in the Katyn pits in 1943

Communists and Russian nationalists continue to deny the truth about Katyn

Despite the official recognition of the true authorship of the massacre by the USSR, many Russian communists and nationalists continue to deny the truth and blame Germany. That is the official position, among others, of the Communist Party of the Russian Federation (PCFR), a political formation that continues to praise the genocidal Stalin, and even the Polish Communist Party. In Russia, a web site, katyn.ru, was launched, dedicated to trying to justify the Soviet version of the massacre. Among other things, that website has called “defamatory anti-Russian film” the feature film “Katyn” directed in 2007 by Polish filmmaker Andrzej Wajda, who tells with great truth the real events of the killing. In addition, in various blogs and forums on the Internet of the far left, Stalin’s lies about killing continue to be defended, even calling the truth about what happened as “lies of fascism”.

A miserable article by the leader of Podemos on Katyn

Other communists say that there is no conclusive evidence in this regard and try to downplay the killing. In an article written in 2010 for the Viento del Sur magazine, today leader of the Spanish ultra-left party Podemos, Pablo Iglesias Turrión, wrote: “Although most sources agree in attributing responsibility for the executions of Katyn to the Soviet army, there is still some controversy surrounding the authorship of the massacre. Some historians and political scientists, especially in Russia, argue that the original Soviet version that accused the Wehrmacht of the crime is more plausible.” According to Iglesias, “the concrete responsibility of that killing, whether or not the USSR is secondary to our purposes“ ( the article talked about the film “Katyn” by Andrzej Wajda), and tried to downplay the possible Soviet authorship by stating that “in that context the war crimes were not strange to either side”. The article ended with a statement in which Iglesias demonstrated his affinity to the Communist lie about that massacre: “We do not deserve that, as in Katyn de Wajda or as in the televisions and radios dominated by the propagandists of the right, history interpret the victors.“ What the victims of Katyn and their families do not deserve is that so many years later, some totalitarian fanatics continue to deny the truth about that massacre committed by the Soviets, a form of denial that deserves to be equated with the one carried out by the nostalgic of Nazism.

The extremism that has killed more people in history and that some still applaud
13·8·2022 · 8:30
Ver más artículos