Their new 'Law of Historical Memory' makes that exception to totalitarianisms

Spanish Socialists Want to Punish the Defense of Nazism and Fascism, But Not Communism

The text of this bill, published on December 22 in the Official State Gazette, includes the following in its first additional provision:

“Associations and Foundations that publicly promote or incite directly or indirectly to hatred, hostility, discrimination or violence against the victims of the Spanish Civil War and the Franco regime because of their status as such, or that make apology for the Franco regime, fascism, and Nazism will be declared illegal.“

The second point of this provision states that “the corresponding amendments will be made to the Organic Law 1/2002, of March 22, regulating the Right of Association and to the Law 50/2002, of December 26, of Foundations, by which will declare illegal the associations and foundations referred to in the previous section“.

The law makes an exception to totalitarian ideologies: communism

This law does not seem oriented to honor the memory of the victims of the totalitarian ideologies, but to the victims of a part of those ideologies. In particular, the text lacks a mention of communism, a totalitarian and undemocratic ideology whose followers have killed more than 100 million people, since the establishment of the first communist dictatorship in Russia in 1917. In fact, the first The communist regime, which had Lenin as its dictator, was a reign of terror in which the Bolsheviks resorted to torture and large-scale murder against large sections of society. In six years, the dictatorship of Lenin murdered ten times more people than the Franco dictatorship in almost 40 years.

As I mentioned here the day before yesterday, in 2006 the PSOE voted together with the communists against a condemnation of the Council of Europe to the crimes of the communist dictatorships. In addition, in 2009 their tried to reduce a condemnation of the European Parliament to these crimes, suppressing almost all references to communism from the text. In Spain and for decades, the Socialist Party has never had any objection to agreeing with the communists, ignoring their support for dictatorships such as the USSR, Cuba and even North Korea. In fact, the recent motion of no confidence that led Pedro Sánchez to power was possible thanks to the support, among others, of the Communist deputies integrated into the parliamentary group of Unidos Podemos.

Despite the magnitude of the atrocities committed by the communist dictatorships, last October the Communist Party of Spain (PCE) celebrated the centenary of the bloody regime of Lenin, at a meeting during which a large portrait of that dictator was exhibited. In this photo of that meeting we see Alberto Garzón, deputy of Unidos Podemos, one of the parliamentarians who supported with his vote the return of the PSOE to power: 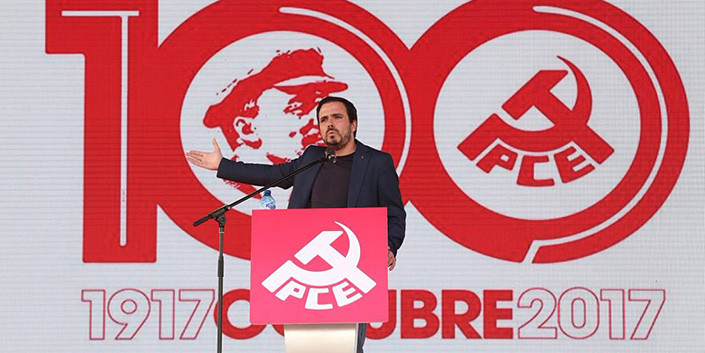 In April, a communist group walked through Madrid portraits of communist dictators such as Lenin, Stalin and Enver Hoxha, whose regime killed 100,000 people in a country, Albania, which in 1950 had only 1.2 million inhabitants. 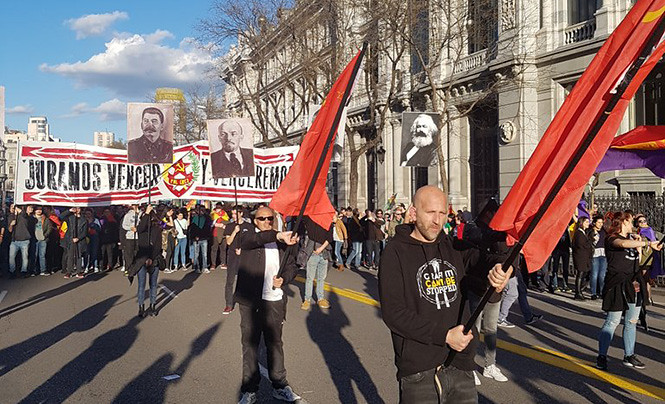 That same month, a communist organization hung a huge banner with a portrait of Stalin at the University of Granada, in order to praise that genocide: 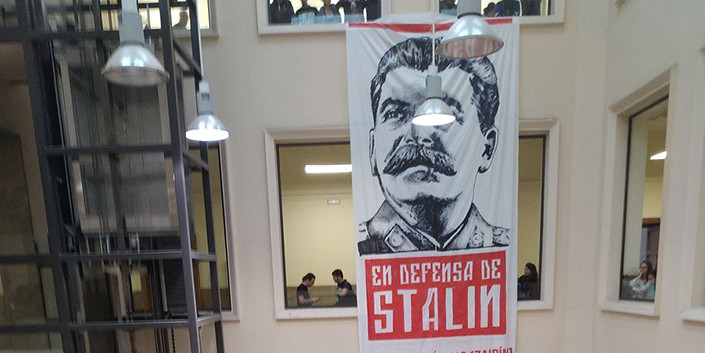 According to the new Law of Historical Memory of the PSOE, if these communists exhibited portraits of Franco, Hitler or Mussolini, these organizations would be outlawed. But as they exhibit portraits of communist dictators, even mass murderers who killed many more people than the Franco regime and Italian fascism together, then nothing happens. What the PSOE law seems to say is that communist crimes are not as reprehensible as nazi crimes, simply because the PSOE gets along well with the communists. If the PSOE achieves its objective, in Spain would be sheltered the memory of the Poles killed in the Wola massacre, but not the memory of the Poles killed in the Katyn massacre, simply because the first was perpetrated by the Nazis and the second was perpetrated by the Soviets (remember that Hitler’s Germany and Stalin’s USSR jointly invaded Poland in 1939). This sectarianism has nothing of “historical memory”: it is an insult to the victims of communist terror.