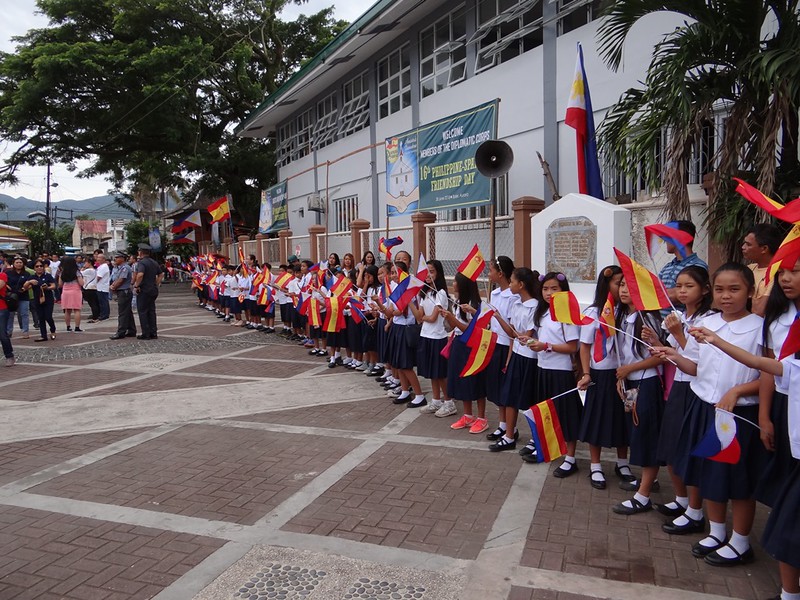 The heroism of “the last of the Philippines” already moved the first Filipino president, Emilio Aguinaldo, who issued a decree on June 30, 1899, a year after the beginning of the siege, claiming that they had become “creditors of the admiration of the world to the Spanish forces that guarded the Baler detachment, for the courage, constancy and heroism with which that handful of isolated men and without hope of any help, has defended its flag for a year, making an epic so glorious and so typical of the legendary value of the children of the Cid and Pelayo“.

The courage shown by that handful of Spaniards is still remembered with admiration for the Filipino people. In the Church of San Luis, which was the one defended by those Spaniards, there is a tombstone in English dedicated to his memory. It was placed in 1939. 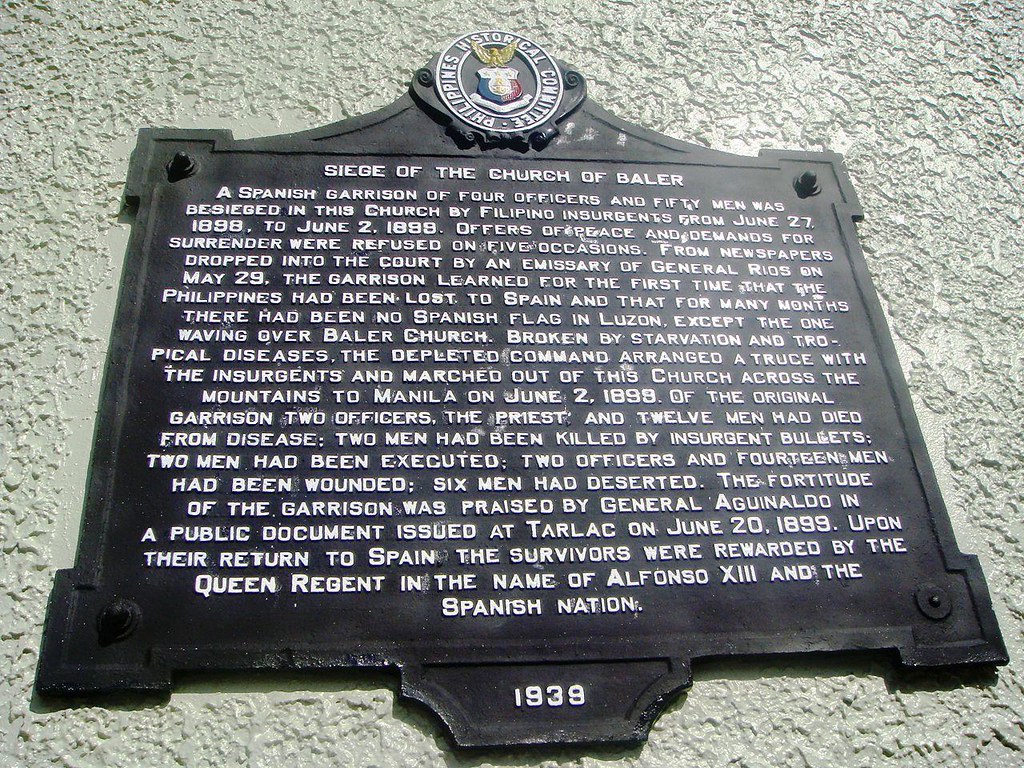 Since 2007, a civil and military tribute to the last ones from the Philippines has been held annually in Baler. As you remember, last year I dedicated a post to this tribute, which was widely shared, and as a result of this one of the participants in that act contacted me; his name is José Antonio Portillo, member of the Veterans Association of the Getafe Air Base (35th Wing), who has informed me of his travel this year to the Philippines to participate in the tribute of Baler, from whom he sent me yesterday a series of photos and a chronicle. I publish them below, along with some of the photos that appeared on Saturday on the Facebook page of the Baler municipal government. 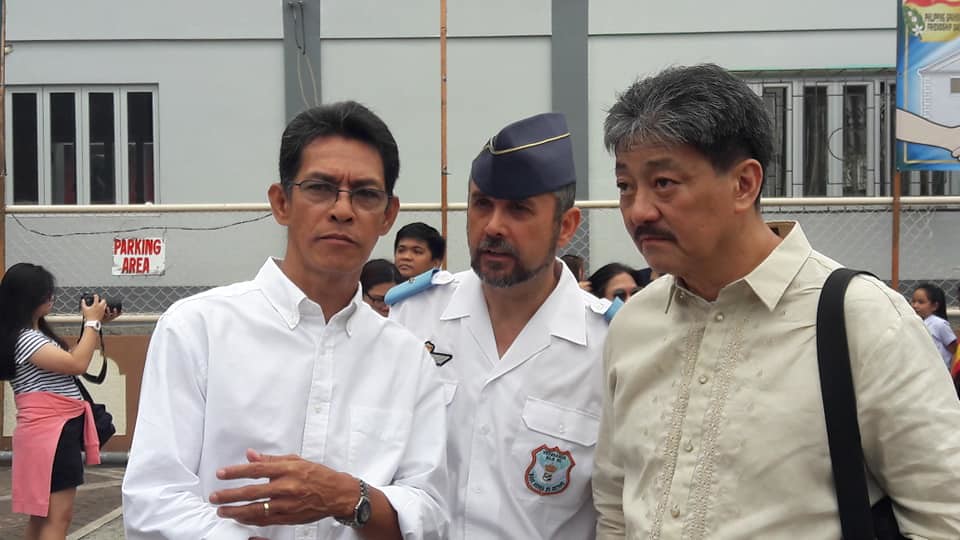 José Antonio Portillo, author of the following chronicle, in the center of the photo, in the civil uniform of the Veterans Association of the Getafe Air Base (35th Wing), during the tribute to the last Spaniard of the Philippines, in Baler.

Who will read me: “16th / Hispanic-Philippine Friendship Day”.

At dawn on Thursday, June 28, we left from Quezon City (Metromanila): a team of the National Historical Commission of the Philippines (NHCP) and me, by land and again to Baler (Aurora), crossing the Provinces of Bulacan , Pampanga, Tarlac, Nueva Ecija, Nueva Vizcaya and Aurora, crossing the Sierra Madre mountains and the foothills of the Montes del Caraballo; and after bending 3 mountain ranges, 2 valleys, 2 swamps, 50 rivers, an impenetrable forest, and finally the extensive coconut plantation we arrived at our destination (200 km in 6 h).

The airplane that would bring the Civil Authorities and buses with the other guests arrived a day later. The Spanish Delegation was composed of the former Minister of Defense José Bono Martínez, (who already visited Baler in 2005 along with a delegation formed by some descendants of the survivors of the Baler Site), outgoing Ambassador of Spain, Director of the Cervantes Institute, City Council Lecrín (Granada), outgoing Defense Attaché, and 5 scholars from the Spanish Institute of Foreign Trade (ICEX). 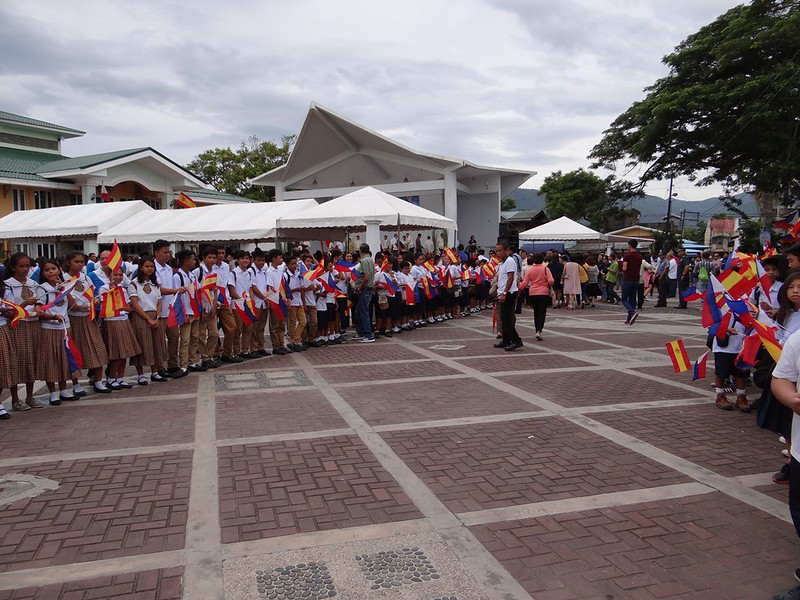 After lunch, a touristic route was taken around the town and a cultural visit to the historical monuments, such as the church, Casa de Dña. Aurora, and the Baler Museum, where former Minister J. Bono was amazed by the collection of gifts acquired by the Museum over the years and donations made disinterestedly by the Armed Forces, Civil Guard, civil institutions and Spanish national museums; given that when the former Minister visited Baler for the first time, the museum was still under construction.

Inside the museum, the Spanish delegation was delighted with an exhibition of the Baler Site, whose story was told by the Director of the Cervantes Institute, although relying on the material provided. The satisfaction of the former Minister Bono was increasing when it recognized the replicas of the commander De Las morenas, brigadier Martín Cerezo, Medical Captain Vigil de Quiñones and Pvt. Adrián Obregón, contributed by the Spanish Museum of the Army, as well as the great variety of gifts coming from other Units of the Army, the Legion and the UME [Military Emergency Unit]. Needless to say, it was Mr. Bono who launched this unit, as well as, has a good memory of the Legion, when as Minister of Defense he presided over the disembarkation of that in the port of Malaga on a Holy Thursday of 2005. 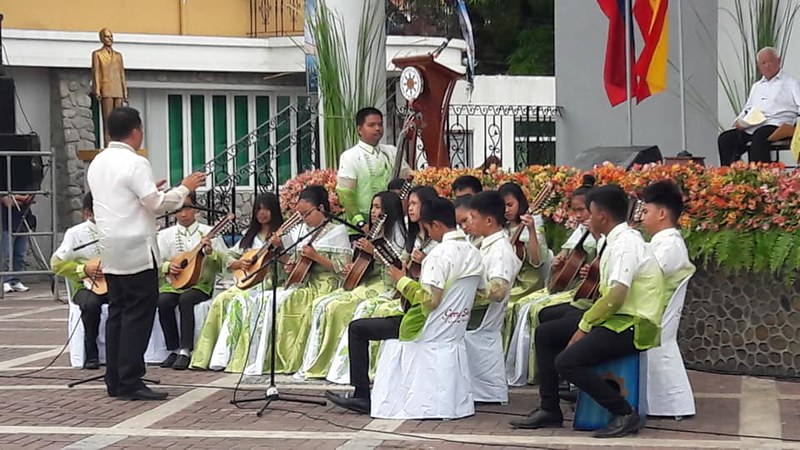 After the welcome dinner, without even having made the digestion, the municipal sports center developed a musical show, where the typical Philippine dance “Tinikling” was danced, (dance consisting of 2 people who slide and hit 2 bamboo poles between them and against the ground, coordinating with 1 or more dancers jumping between the reeds), and to the surprise of the Spanish delegation, also the Jota Moncadeña; ending with the unforgettable song “Yo te diré” [“I’ll tell you”], composed by writer and screenwriter Emilio Sánchez Llovet. As a cultural exchange, the Spanish saxophonist Agustín Carmona played the “Brillance” by Igor Schowkosky. 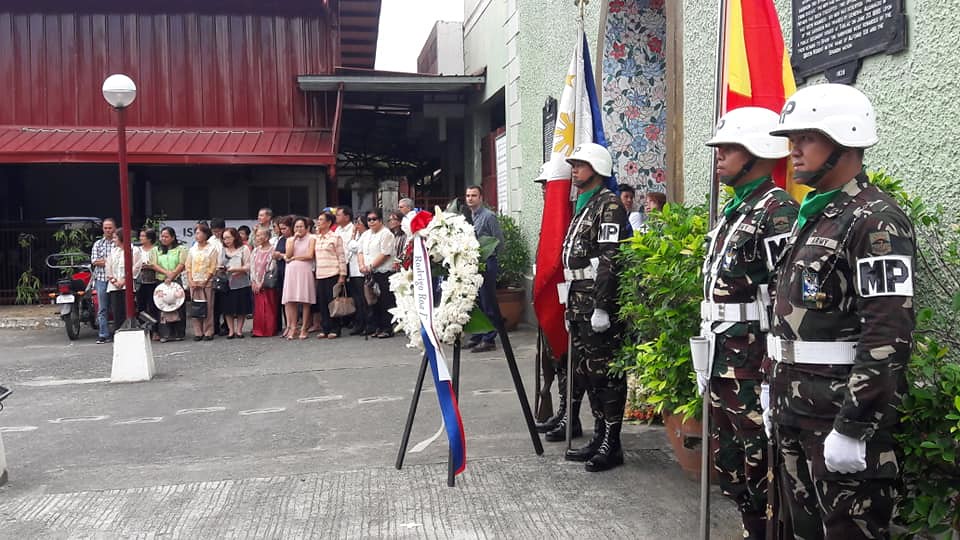 At dawn on Saturday, June 30, after the Mass in the church of Baler, attended by the Authorities, the newly created Battalion “Sinagtala” 91 of the Philippine Army presented arms in front of that, while both national anthems were playing, being present on this occasion, the General of the Brigade of the Headquarters of the VII Infantry Division “Kaugnay”, and to whom this year, the Spanish Army has been pleased to present with bottles of Spanish wine, (collected by me, so as not to be penalized through customs, he had no choice but to leave 2/3 of the total in Spain), in recognition and gratitude for the honors given to our comrades of yesteryear “heroes of Baler”. In fact during the siege, and as in all armed conflicts where chivalry reigns and the enemy is respected in the face of cruelty and hatred, during a ceasefire, the insurgents presented the defenders of the church with a box of cigarettes, giving them garnish a bottle of brandy in reciprocity. Since 2014 a bottle of “3 Copas” brandy, donated by González-Byass, (since it was once the only winery with an export license in the Philippines), and an explanatory table of the event, made by Cristalerias, has been exhibited at the Baler Museum, made by Cristalerías Granados (MA). 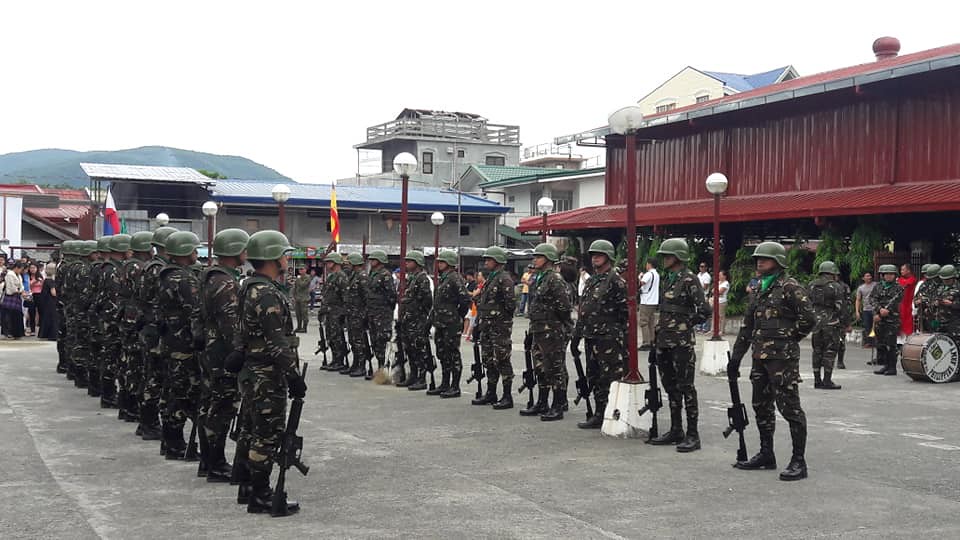 After the salutes of honor, the Official Committee moved to the town square, where once there they proceeded to the institutional speeches, where the Philippine Delegation was represented by: Secretary of the Department of Tourism, President of the NHCP René Escalante, Senator of the Philippines Juan Edgardo Angara, Governor of the Province of Aurora Rommel Angara, Representative of the District of Aurora, Mayor of Baler Nelianto Bihasa and President of the Historical Society of Cavite and Honorary Prime Minister César Virata, (grandson of President Emilio Aguinaldo, who promulgated the Decree of 30-June-1899 that recognized the bizarreness of the Spanish soldiers besieged in the church of Baler, considering them as friends and not as prisoners of war). 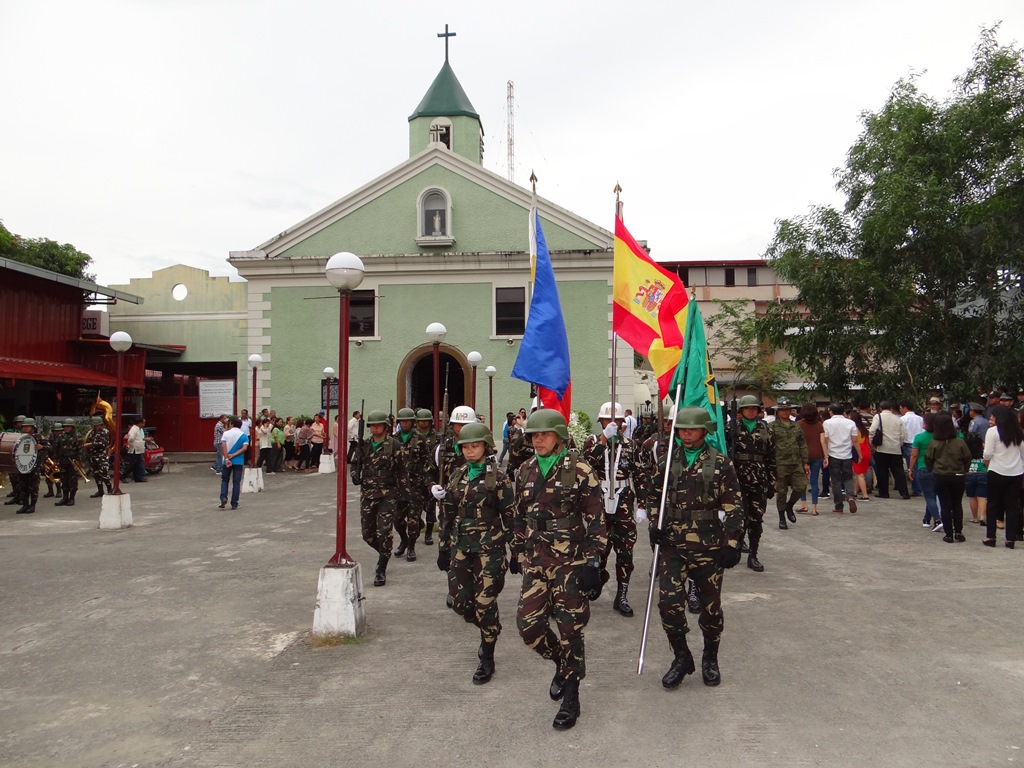 Although in the minds of all present was the Honorary Senator of the Philippines and for Europe, Edgardo Javier Angara, former President of the Senate, investor and major promoter in Baler of the Hispanic-Philippine Friendship Day, passed away on May 13, and for whom There was a moment of remembrance, when his entire family presented itself: widow, children and grandchildren. 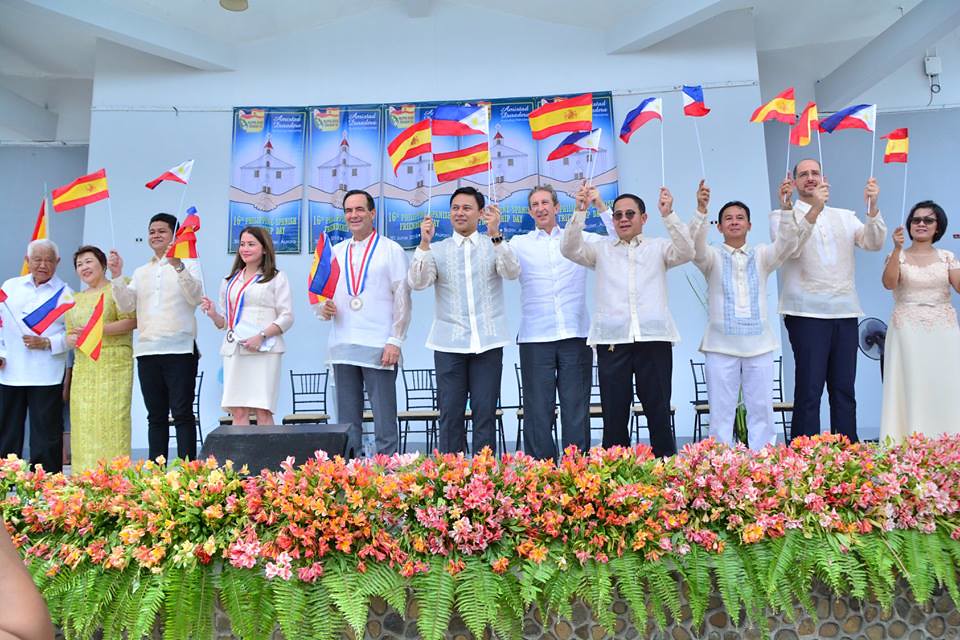 Having taken place all the speeches of rigor, (on the Spanish side, former Minister José Bono addressed the town of Baler in Spanish, being simultaneously translated into Tagalog by an interpreter), the Director of the Cervantes Institute from Manila Carlos Madrid Álvarez-Piñer became the adopted son of Baler, the key to the city was handed to the outgoing Ambassador of Spain, Luis Antonio Calvo Castaño, and the twinning between the municipalities of Baler (Aurora, Philippines) and Lecrin (Granada, Spain), respectively, was signed by the Mayors Nelianto Bihasa and Salvador Ramírez Góngora; through whose valley the latter walked a young doctor named Rogelio Vigil de Quiñones, who would end up besieged in the church of Baler, and whose knowledge acquired in those years, would serve to resist the 11 months of siege. 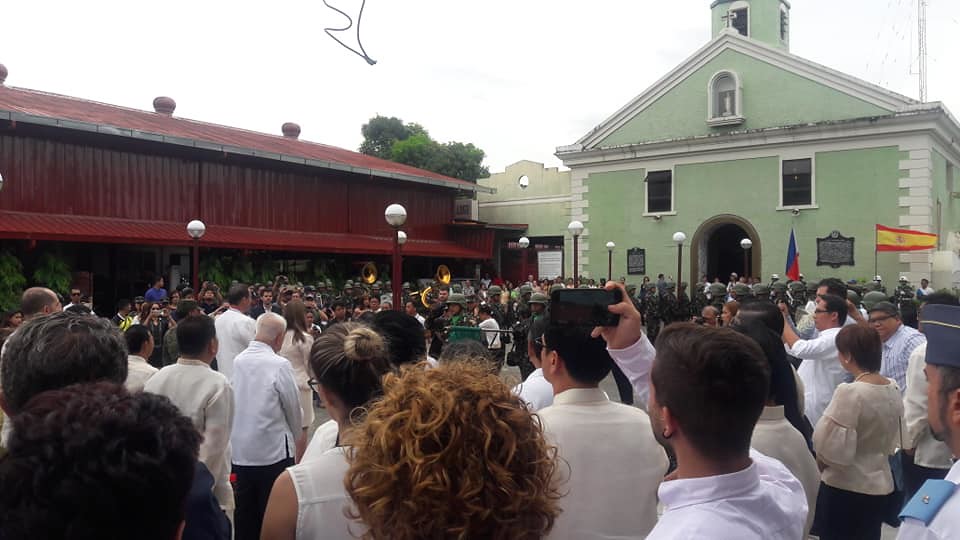 I was also present; a few days before I had arrived by road, with 7 boxes full of gifts, replicas and copies of national museums and other institutions, (including 40 kg in gifts from the Armed Forces and the Civil Guard for the Museum of Baler), and in this edition on behalf of the Veterans Association of the Getafe Air Base (35th Wing), since this year marks the 75th anniversary of the Spanish General Air Academy.

It is worth mentioning the financial support of the Foundation for the Promotion of Industrial Innovation (Polytechnic University of Madri), both in the reproduction of replicas and murals and in their subsequent shipment to the Philippines. 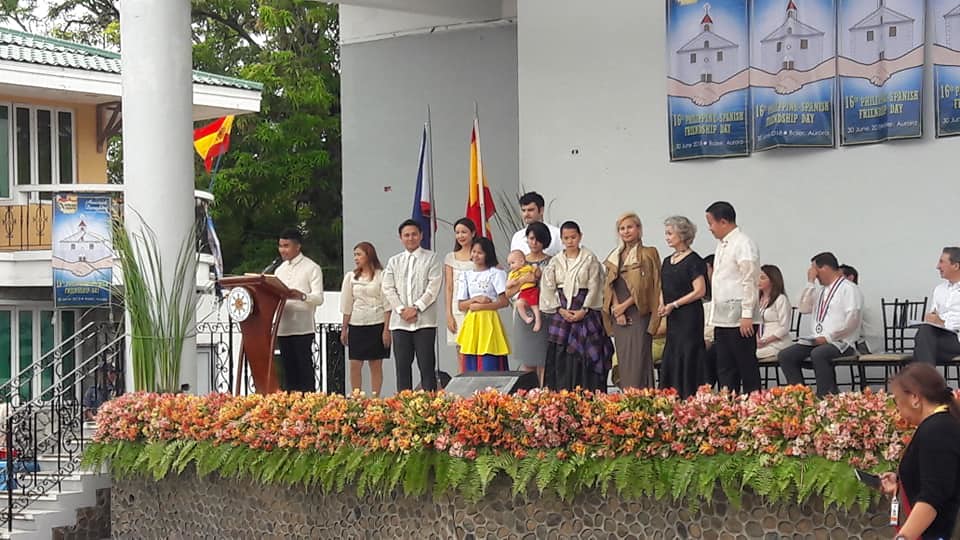 In relation to Malaga have been donated among other things: photographs of the flight (Madrid-Malaga-Manila of 1932) by Fernando Rein Lorin for the Aeronautical Museum, 1 bottle of beer for “San Miguel Beers and Malt Factory”, 1 anchovy ceramic by the Military Residente “Tte. Gral. Castañón de Mena”, 1 metope, 1 painting and 1 jar by Military Residence of Student Social Action “Virgen de La Paz” (Ronda), a cup and a memorial mural of the flight (Madrid-Manila of 1926) of the Elcano Patrol for the Bobadilla Air Station, and a helicopter pilot uniform by Air Unit of the Civil Guard.

Outside the protocol, Senator Juan Edgardo Angara was handed over another bottle of beer “San Miguel Manila”, (facilitated by the Factory of Malaga), who having no knowledge of it, was inexorably stupefied. As a complement to the 16th / Hispanic-Philippine Friendship Day, 80 Spanish language and literature books were delivered to the Secondary National School of Education of Aurora, donated by 4 private persons. 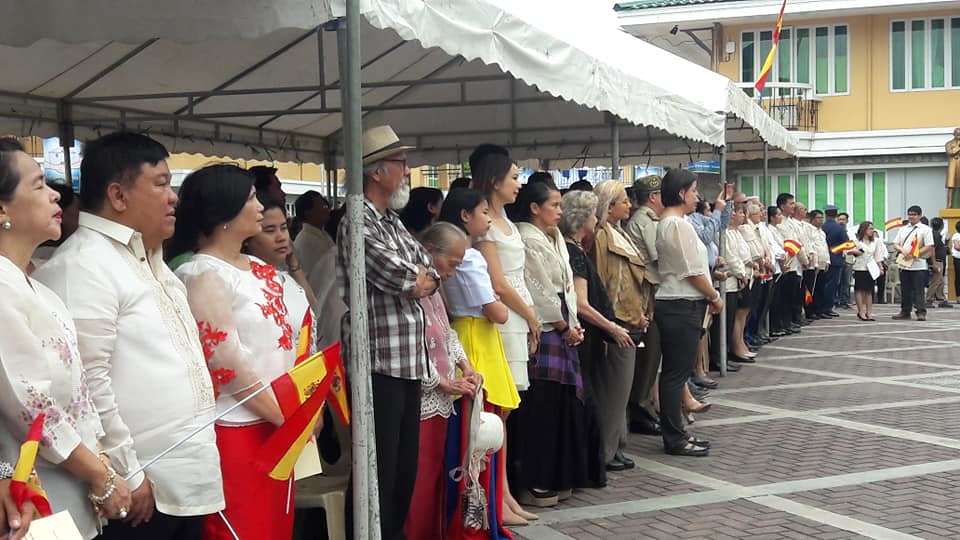 Finally and as anecdotes, the entire Spanish delegation wandered all afternoon on Friday 29 in T-shirt, because while their arrival in Baler was made by air, baggage was made by land, crossing the mountains in vans. During the tribute to the heroes in front of the church, a drone flew above all recording what was happening there, but it ran out of battery in mid-flight, it went into an auger, rushing to the ground like a meteorite and sounding like thunder, creating panic and setback among some, and causing laughter among others.

Epilogue: After 1 lustrum of lasting friendship, the affection shown in just 2 days by the Balerians is infinite, countless are the thanks and services provided so that the Delegations are at home, and a municipality with almost 40,000 inhabitants, overturns with an event that only 16 years ago was totally unknown to them. In the next edition of 2019, it should be the donors who present their own credentials in Baler. 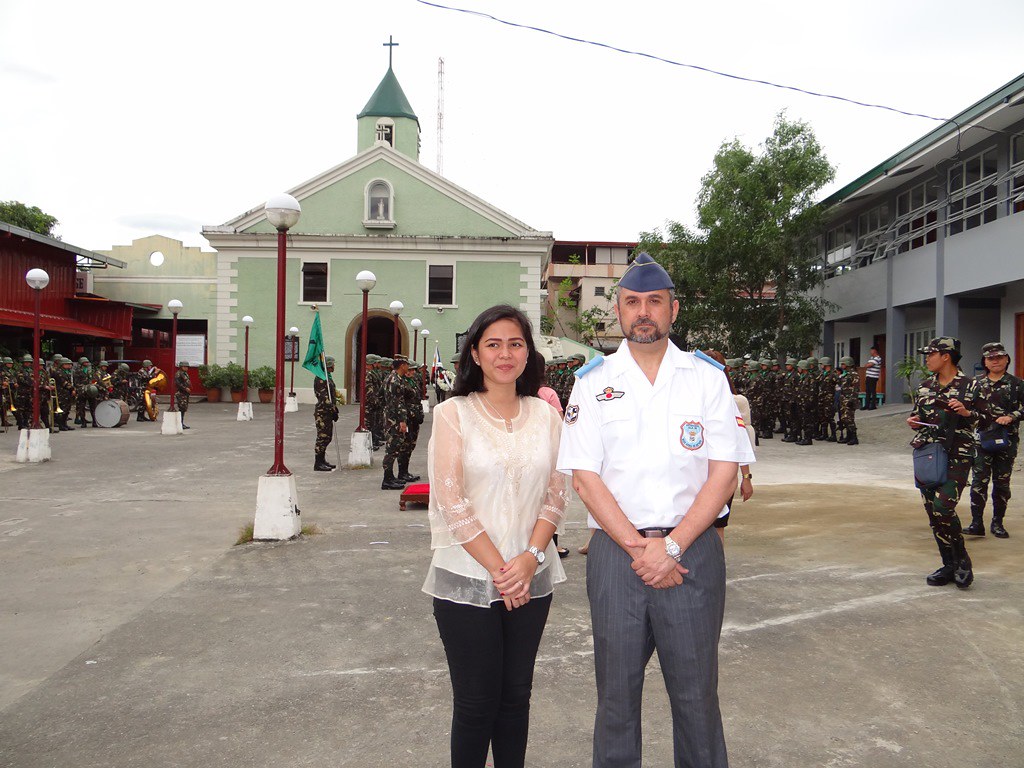 José Antonio has also sent me two lists of Spanish entities that have sent donations and gifts to the Baler Museum and to the “Sinagtala” Battalion of the Philippine Army, which has carried out this year’s tribute. These listings are a demonstration that the Spanish people have not forgotten their old bonds of brotherhood with the Filipino people. I publish them below:

CIVILIAN AND MILITARY INSTITUTIONS COLLABORATORS AND / OR DONORS TO THE BALER MUSEUM AT THE 16TH / DAY OF FRIENDSHIP-SPANISH-PHILIPPINES (BALER, AURORA, PHILIPPINES, 06-30-2018):

CIVILIAN AND MILITARY INSTITUTIONS COLLABORATING AND / OR DONORS TO THE BATTALION “SINAGTALA” 91 OF THE DIVISION OF INFANTRY “KAUGNAY” VII WITH BOTTLES OF WINE IN THE 16st / HISPANIC-PHILIPPINE FRIENDSHIP DAY (BALER, AURORA, PHILIPPINES, 06-30-2018): 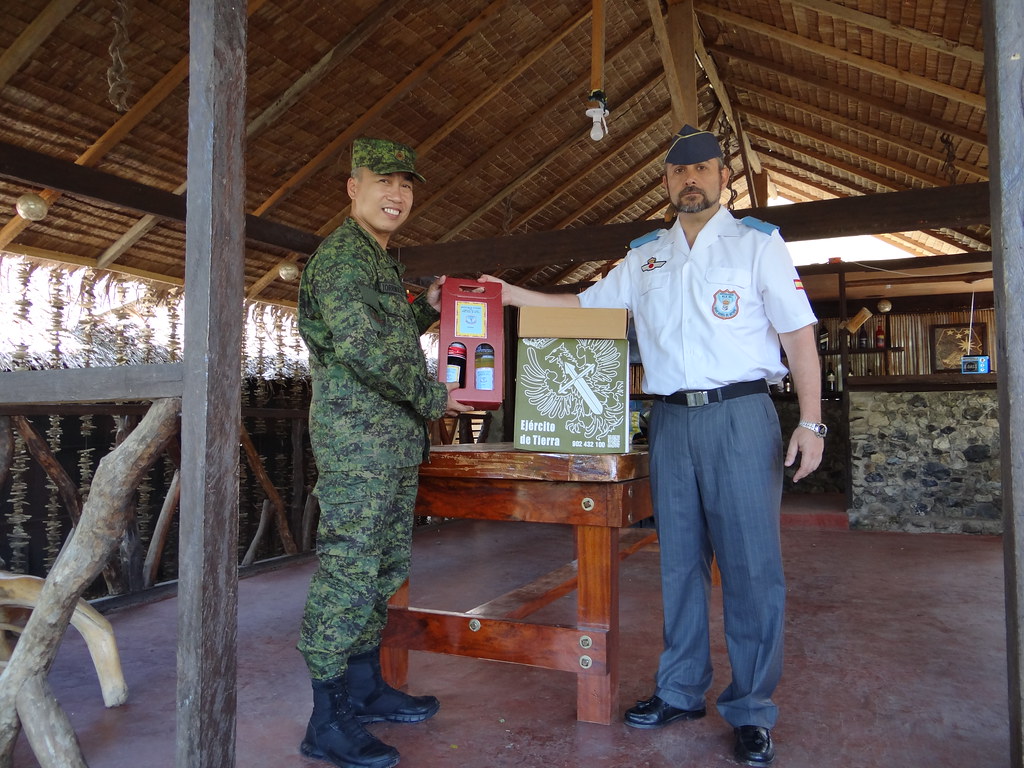 As Portillo has indicated me, the delivery of the wine bottles of the Mountain Hunters Brigade “Aragón” I, the Mechanized Infantry Brigade “Guzmán El Bueno” X, the Mechanized Infantry Brigade “Extremadura” XI, the Brigade of Armored Infantry “Guadarrama” XII, the Academy of Cavalry, the Academy of Engineers, the Military School of Mountain and Special Operations (EMMOE) and the Armored Regiment “Alcántara” 10, at the moment are pending for 2019. You can see here several photos of Portillo delivering the bottles of wine given by Spanish military units to Lieutenant Colonel Torrenueva, Chief of BINF91, and to Major Cuevas. 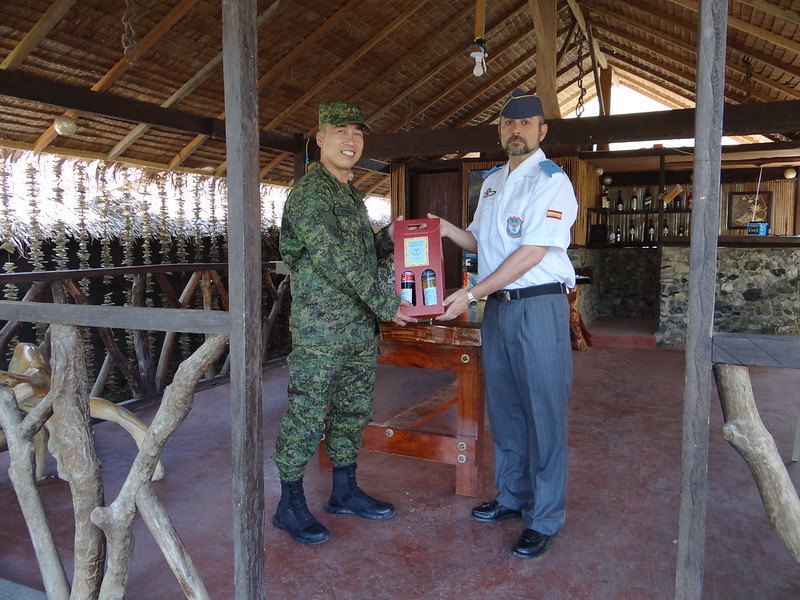 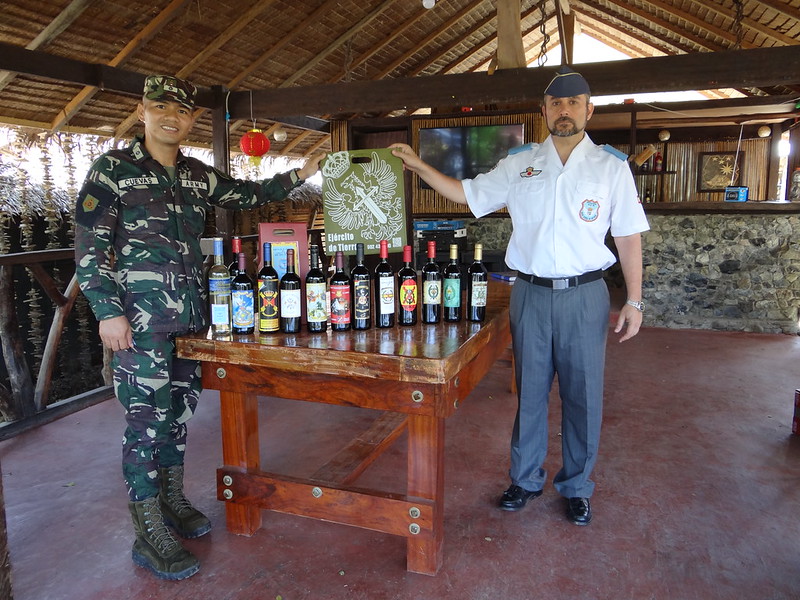