In memory of the 1,800 Spaniards who were shipwrecked in Streedagh in 1588

Last Saturday, in County Sligo (Ireland), the current flag of Spain and the Spanish Imperial flag were hoisted to remember the Spaniards who were shipwrecked there on September 26, 1588.

As I told you here last year, the waters near the Streedagh Beach were those that swallowed three Spanish ships, the Lavia, the Juliana and the Santa María de Mink, which were part of the famous Great Spanish Armada, an expedition that the English propaganda baptized, with burlesque spirit, as the "Invincible Armada". Then Ireland was in the hands of the English and they executed 150 of the castaways who managed to reach the coast. Of the 1,800 crew members of the three ships there were only a hundred survivors, who were saved thanks to the help of Irish Catholics. 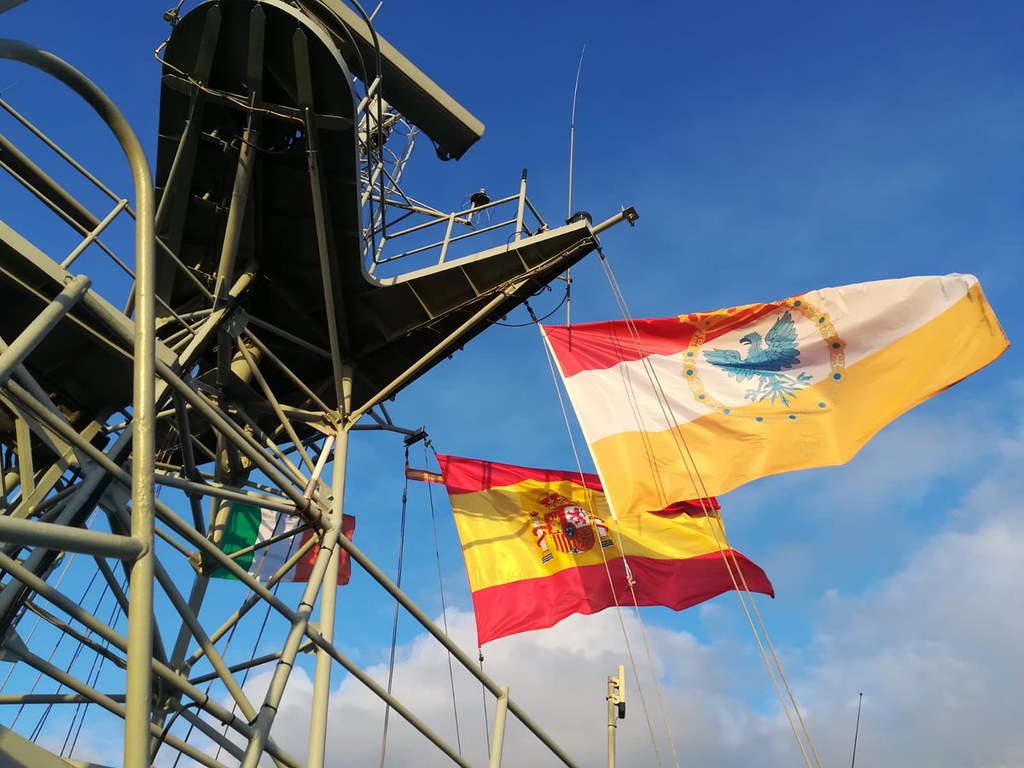 The descendants of those Irish people remember the Spanish shipwrecked year after year. This time, the Spanish Navy sent a ship to that place to participate in the tribute to their fallen, which arrived in Ireland on Thursday, September 20. Like the "Centinela" two years ago and the "Arnomendi" in 2017, this weekend the patrol boat "Atalaya" hoisted the flag that waved the Spanish ships of the Spanish Armada, red, white and yellow, with an eagle stamped by a crown and surrounded by the Golden Fleece. Shortly after his arrival in Ireland, the commander of the "Atalaya", Corvette Captain Álvaro Calderón Izquierdo, received on board Eddie O'Gorman, president of the Grange and Armada Development Association, the entity that organizes the tribute to the Spanish shipwrecked, which gave our sailors the welcome to Ireland. 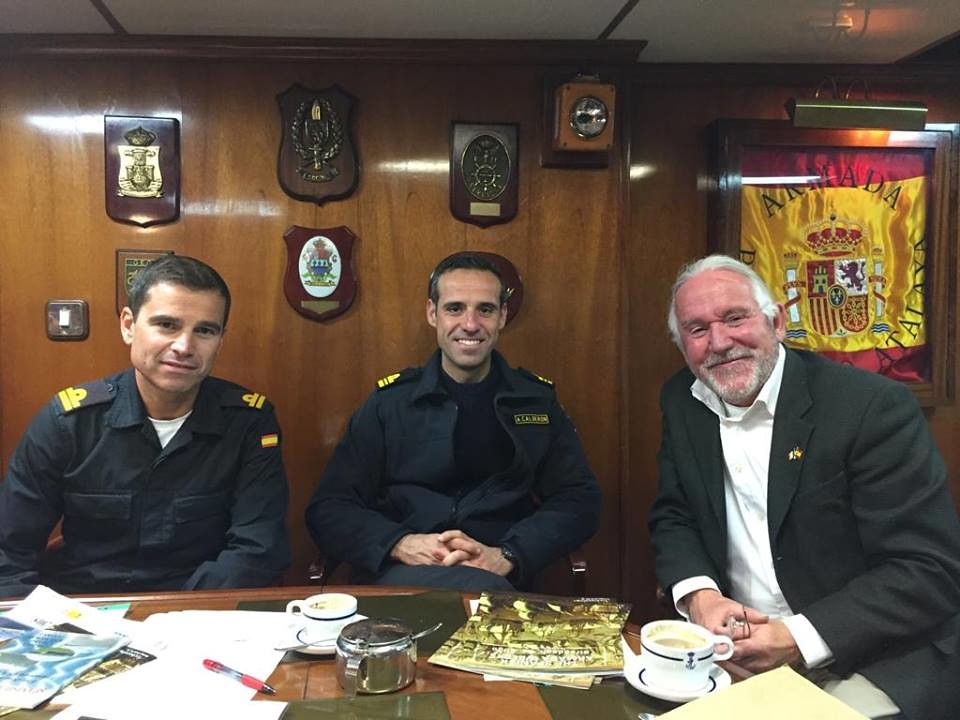 Captain Calderón and other crew of the Spanish ship disembarked on September 21 to participate in the commemorative events that took place on Saturday in the town of Grange, in the framework of "Remembering the Armada Festival", in which also participated the second head of the Embassy of Spain in Dublin, Javier González Sanjuan, the Minister of Justice of Ireland, Charlie Flanagan, and representatives of the Irish Naval Service. One of the most special moments was the inauguration of a museum dedicated to the Spanish Armada in Grange. 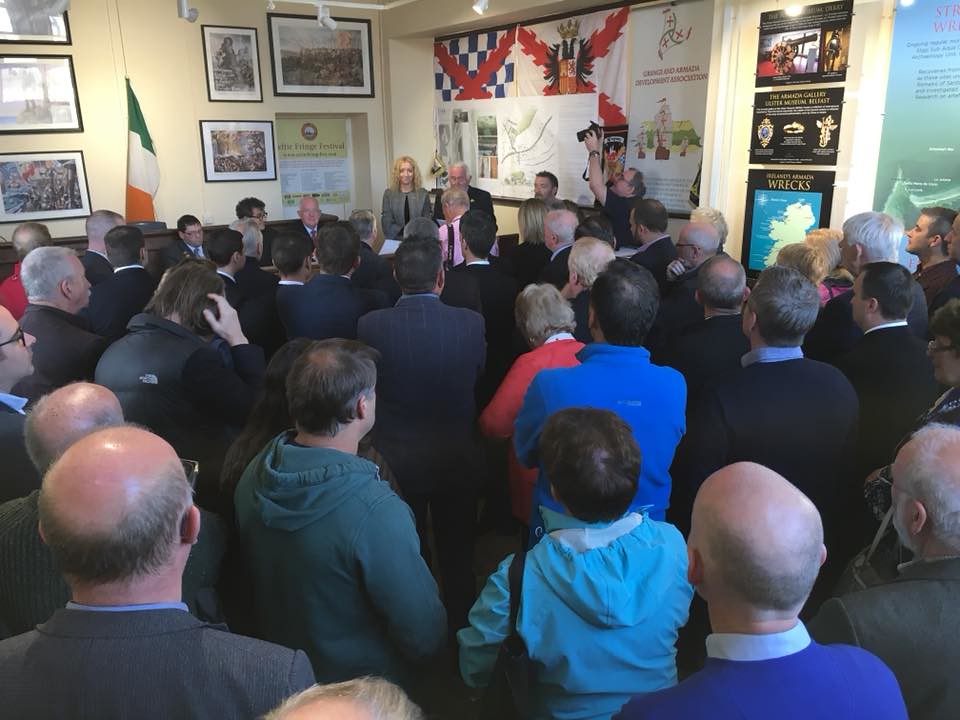 During the inauguration, Captain Calderón thanked the organizers of this tribute to the Spanish castaways, referring to the ties between Spain and Ireland.

In addition, Captain Calderón gave Eddie O'Gorman a metope with the image of Patrolman "Atalaya", as testimony of the ties with Ireland of this Spanish ship, which has already visited the island three times. 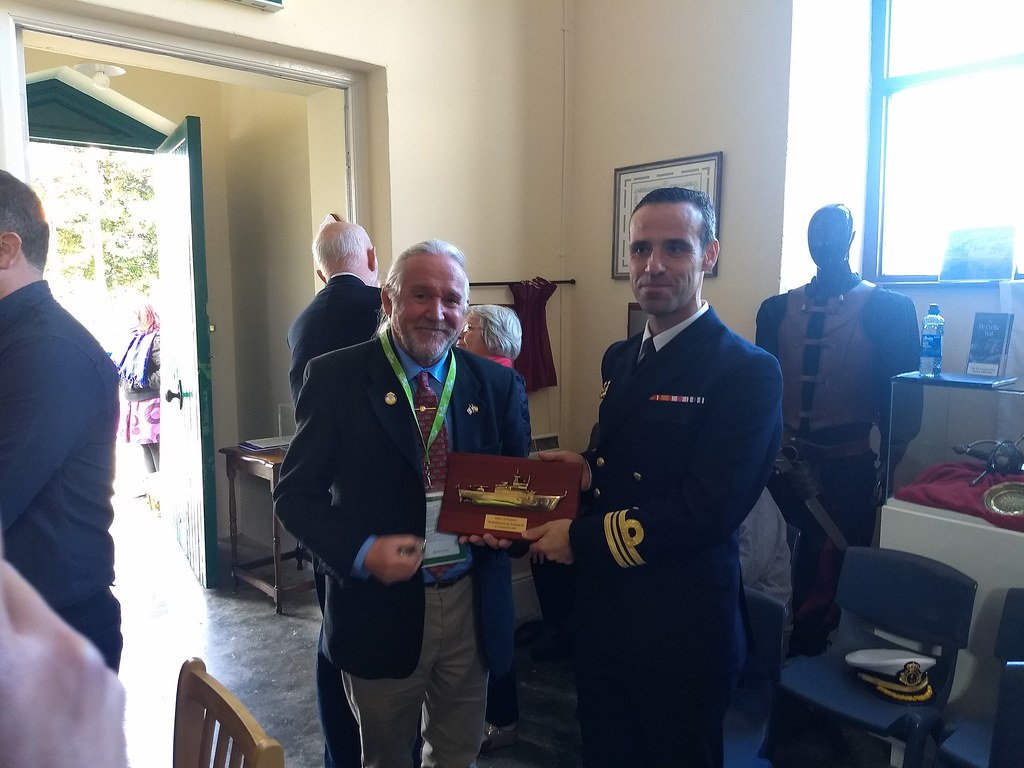 On Saturday at dawn, the town of Grange, in the county of Sligo, presented this aspect, with three flags waving: the flag of Ireland, the flag of Spain and the Spanish imperial flag, in homage to the Spaniards who perished before its coasts 430 years ago. 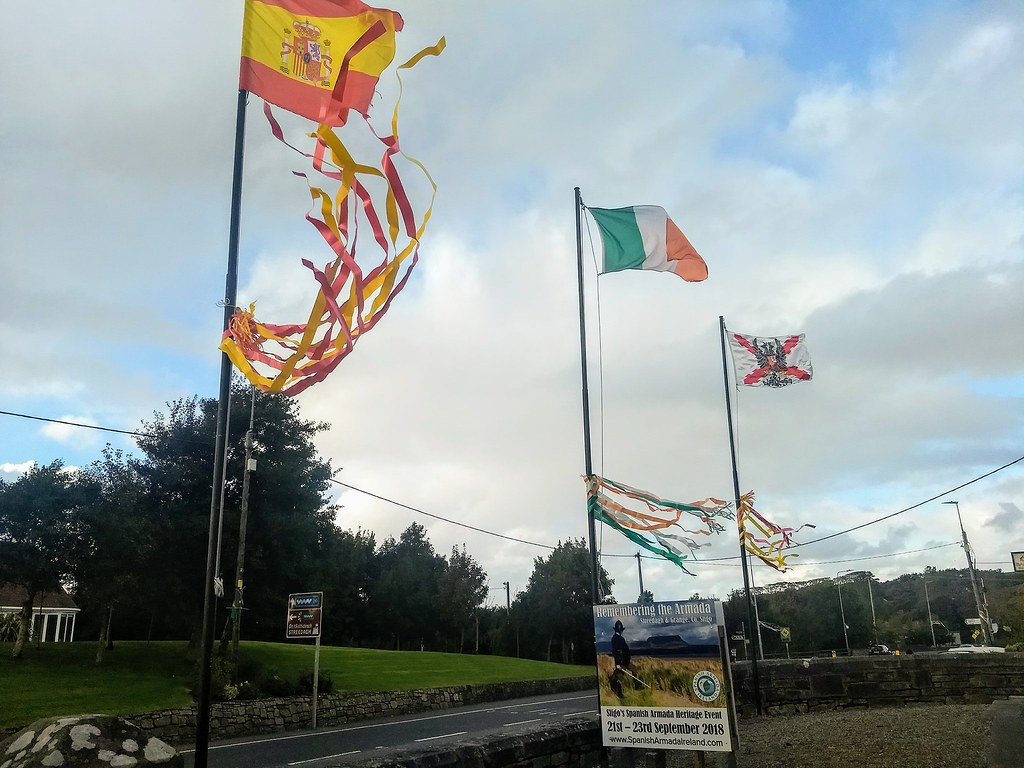 On Saturday evening, one of the most exciting moments of this tribute took place: the Twilight Parade towards Streedagh Beach. In this parade, hundreds of locals march to the coast to pay homage to the Spanish castaways of 1588. To give you an idea, Grange has less than 600 inhabitants. That day the town must be half empty to remember our fallen: really exciting. 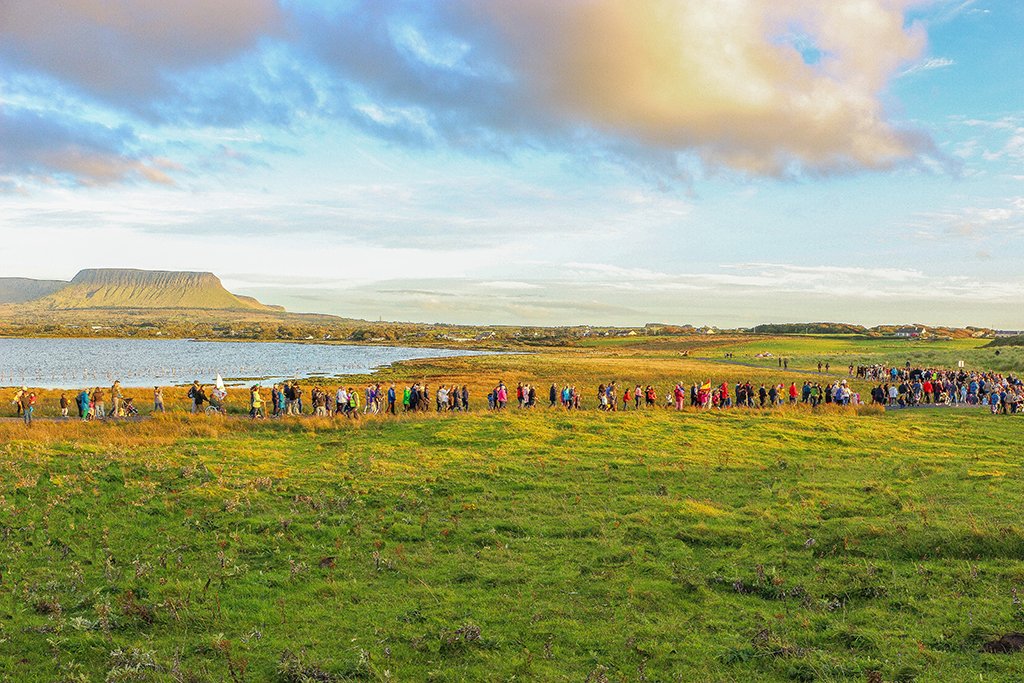 The retinue was headed by an Irish bagpiper, followed by a recreator with a morion and breastplate in the style of the sixteenth century, and behind them the Spanish and Irish sailors and local civilians. 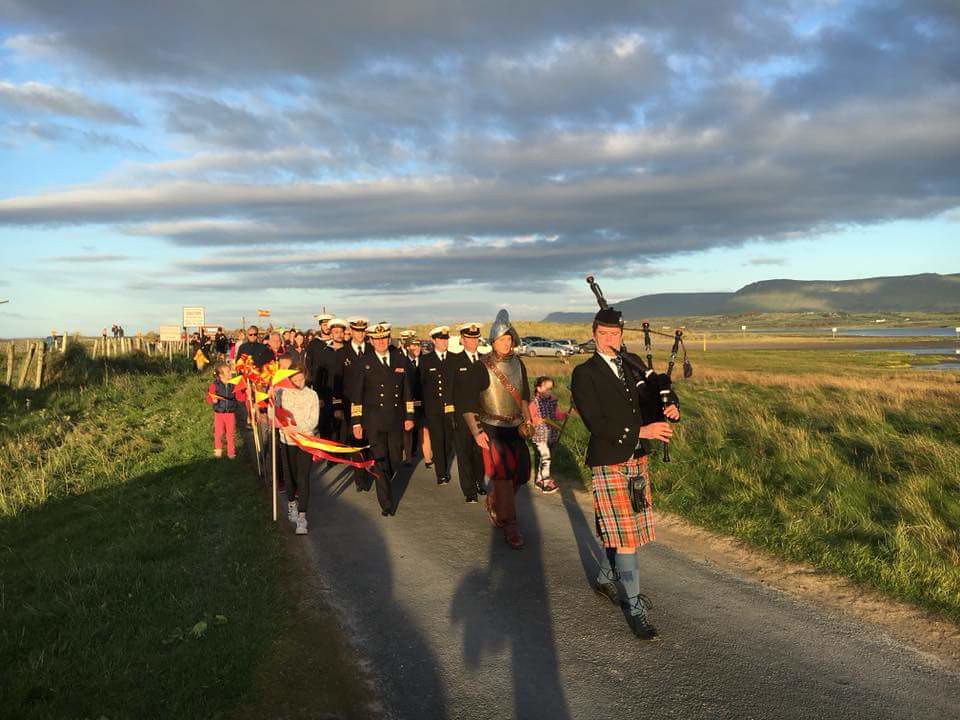 Each villager carried a cross, to plant it on the beach. Every year, the locals plant or draw in the sand about 1,100 crosses, one for each Spaniard who died in that wreck. 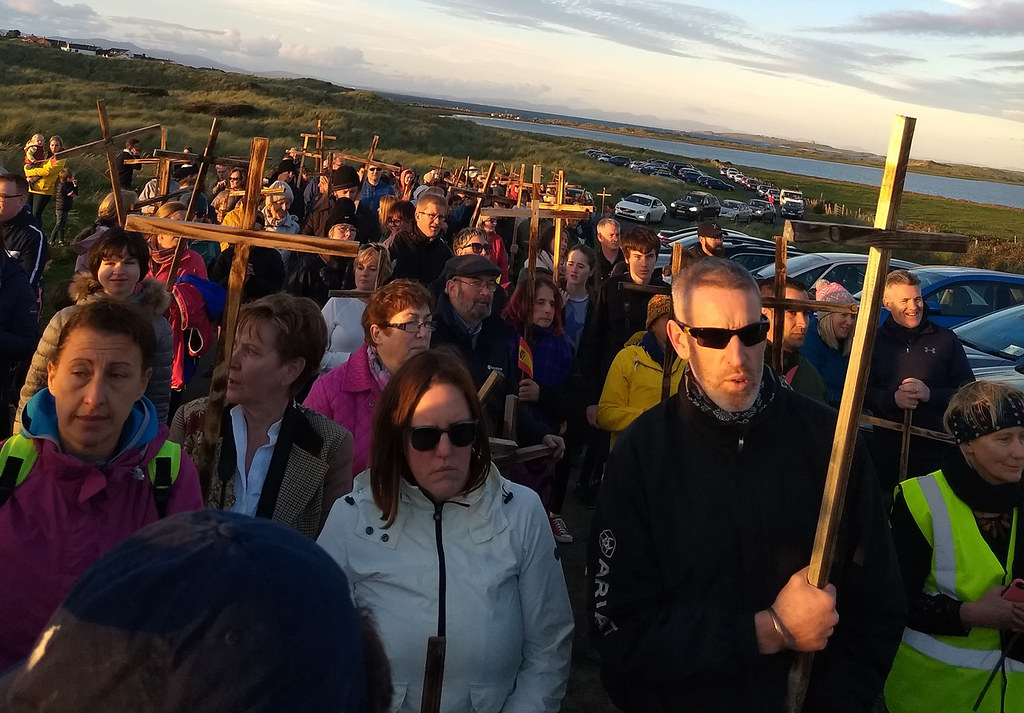 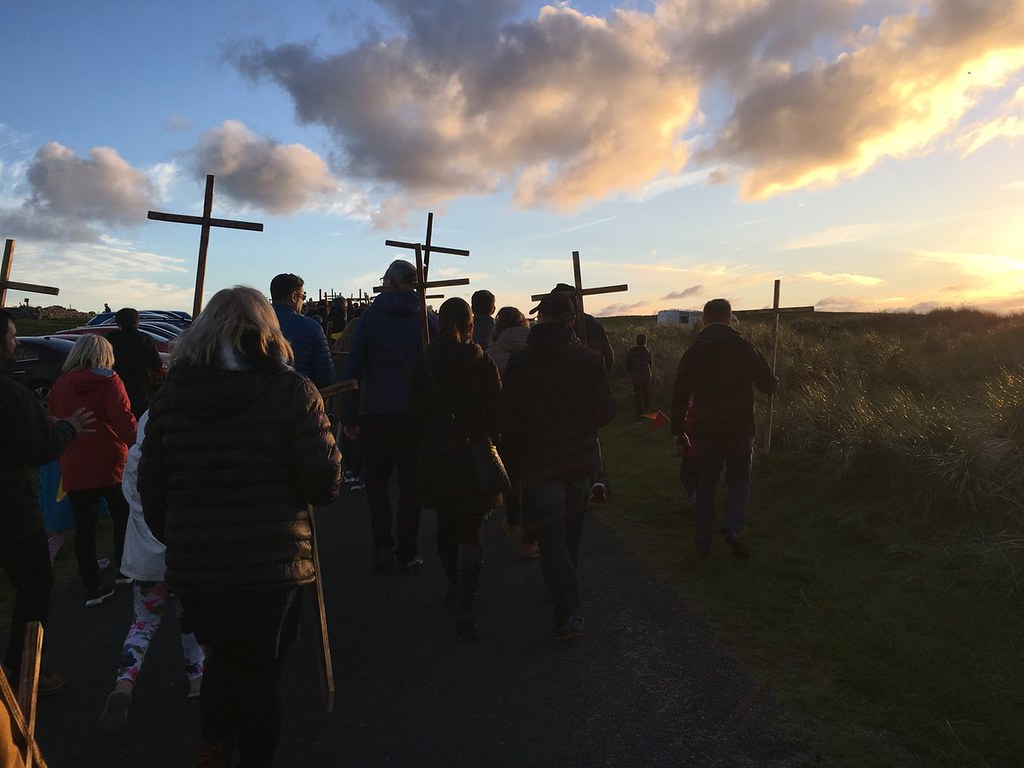 The Patrol boat "Atalaya" followed the tribute closely, in the vicinity of the beach. 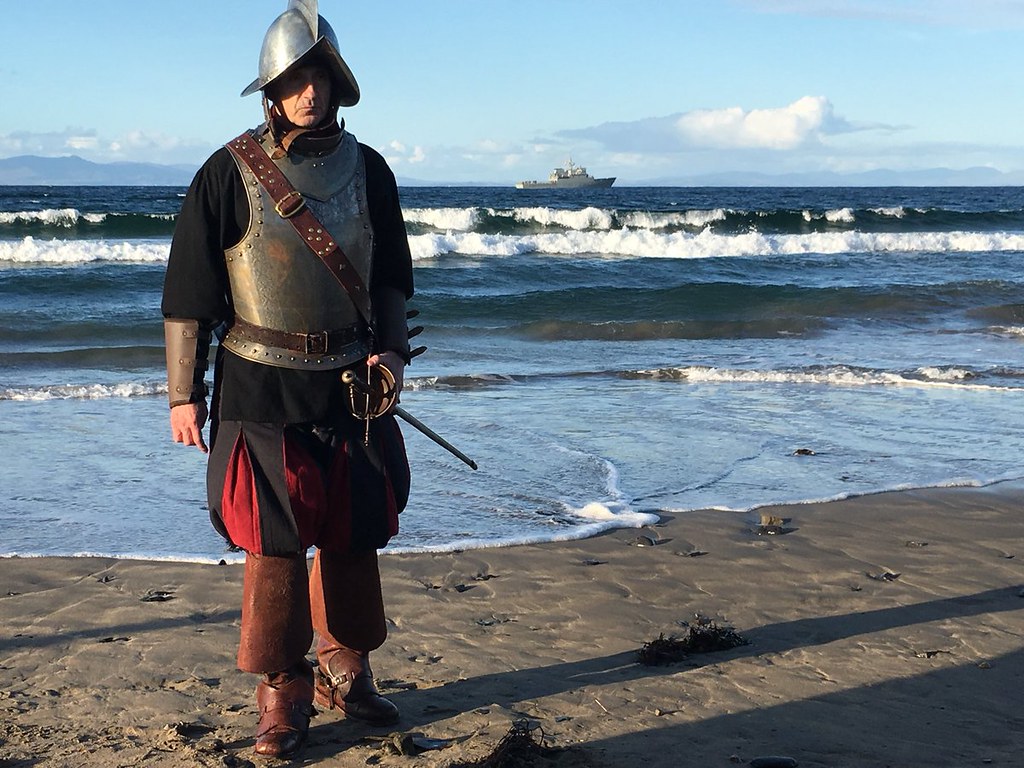 Finally, the delegation deposited a wreath of flowers at the monument to the Spanish Armada on Streedagh Beach, where the flags of Ireland and Spain usually wave (you can see it here on Google Street Views). 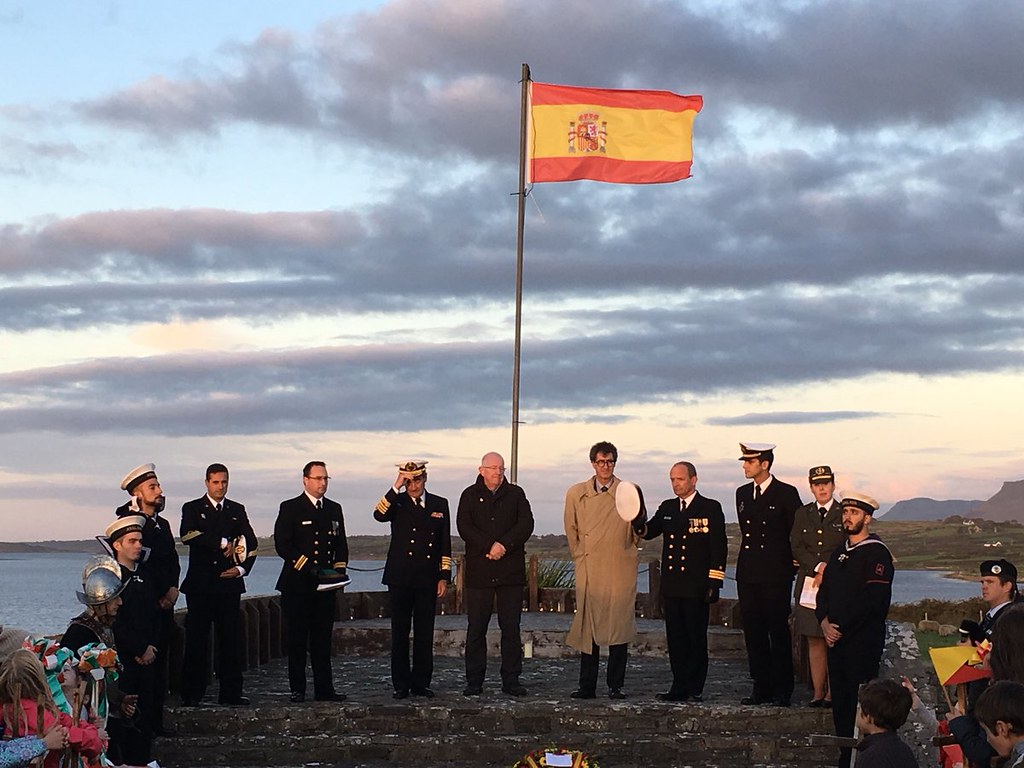 My gratitude from Spain to these Irish who year after year remember our fallen. Seeing the images of this tribute is really exciting.

+ UPDATED 9.25.2018: I include here the video of the tribute on Streedagh beach that Micheál Ó Domhnaill has published on his Youtube channel: