Today in Madrid something embarrassing has happened, which demonstrates the degree of vileness and cynicism to which much of the Spanish left has come, the same one that boasts of “feminist”.

As usual, this morning various politicians have taken a walk through the Prairie of St Isidro to mark the day of the patron saint of the city of Madrid. The candidate of the Ciudadanos party Begoña Villacís, nine months pregnant, was insulted and harassed by leftists of the so-called Platform of Affected by the Mortgage (PAH), an entity related to the far-left party Podemos. You can see what happened in this video:

Far from condemning what happened, far-leftist councilwoman Rommy Arce has come out to defend the stalkers in front of the Police, which has prevented the act of intimidation from going further. The mayor, the communist Manuela Carmena, has not condemned the act of harassment, and the feminist associations either. They will be very busy looking for “micromachists” of those who do such oppressive things as opening the door to a woman and giving her a compliment. Atention to this photo of Villacís posted on Twitter by @InquilinatoMad next to the threat “let’s go for you”: one of the stalkers – as seen in the video, he was a man – wore a banner with the motto “Let’s knock down patriarchy, not climate. To knock down patriarchy is that some uncles harass a pregnant woman who is about to give birth? Petty scoundrel. 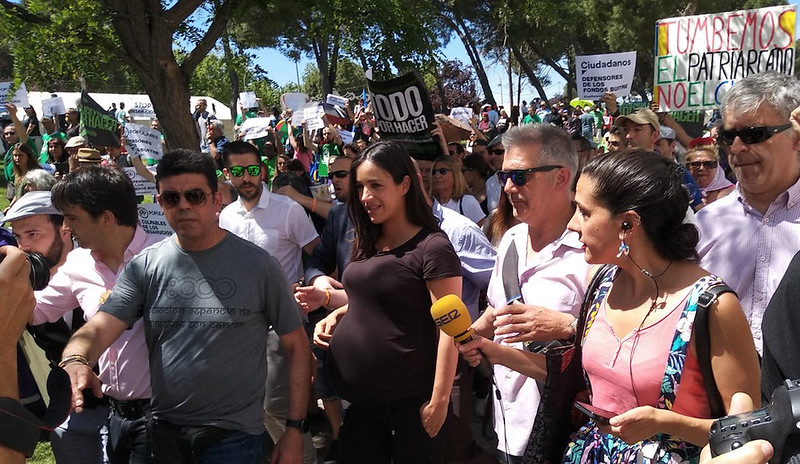 Progressive media do not detect “machismo” in this act of harassment

Something unfortunately similar has happened in the media. The socialist newspaper El País, which labeled as “macho” things such as scratching his beard, putting his thumbs in his pockets or clashing his palms, but today it has reported the act of harassment to Villacís without citing “machismo” anywhere. Apparently, the feminists of the progressive newspaper find it more criticizable to scratch your beard than to insult and harass a nine month pregnant mother. The same happened with Ignacio Escolar’s far-left newspaper and on the socialist website El Plural, two media that are always seeing “machismo” everywhere, but do not mention it to refer to this act of harassment. The far-leftist pamphlet Público has not even reported what happened.

My support to Begoña Villacís in the face of this intolerable act of harassment.