The Historical-Cultural Association Poland First to Fight in Poland

Yesterday the 75th anniversary of the start of the Warsaw Uprising was celebrated, the biggest uprising of World War II. A group of Spaniards has traveled to Poland to commemorate it.

This group of Spaniards belongs to the Historical-Cultural Association Poland First to Fight (PFTF), which is named after a famous cartel that claimed Poland’s role as the first to fight against Nazi Germany. The association began its journey in 2008 in La Coruña, formalizing its registration two years later. The association is mainly dedicated to recreating Poland’s struggle for its freedom in World War II. In June 2011, eleven members of this association received the Pro-Memory Medal, awarded by the Office of Ex-combatants and Retaliated Persons of the Polish Government to those persons who have performed outstanding acts for the preservation of the memory of Polish veterans. In November 2017, 21 members of Poland First to Fight received Diplomas of Honor for the Promotion of Poland in the World, a distinction granted by the Minister of Foreign Affairs of Poland “for outstanding contributions to the promotion of Poland worldwide”.

You can see below some photos of the activities in which the members of Poland First to Fight participated on the occasion of the 75th anniversary of the Uprising in the Polish capital: 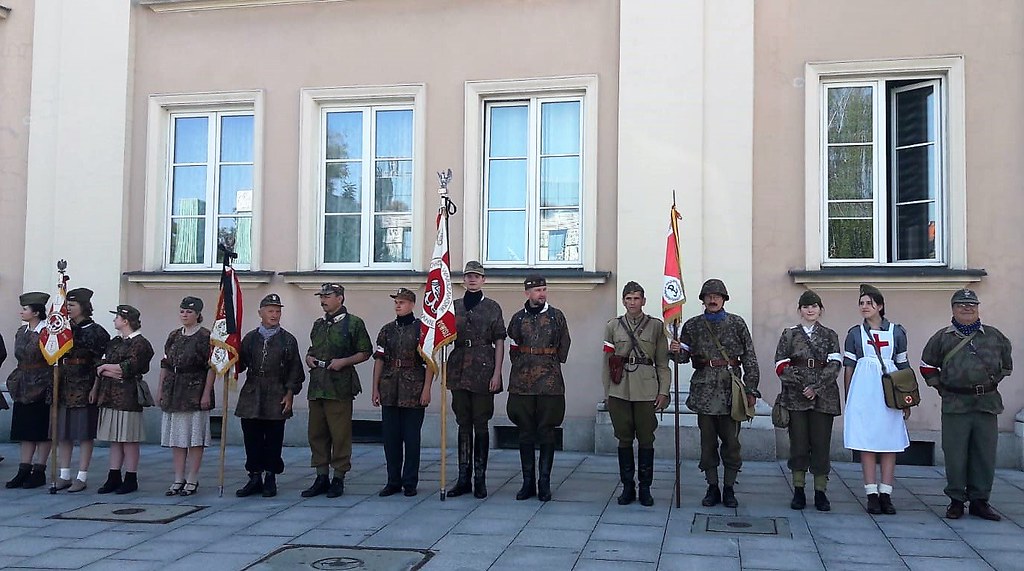 The group of Spanish PFTF reenactors (right) with Polish reenactors in the Warsaw Military Cathedral, this Wednesday, July 31 in the morning. There they attended the funeral Mass for Captain Ryszard Białous “Jerzy”, a veteran of the September 1939 campaign and a member of Armia Krajowa, the largest Polish resistance organization. 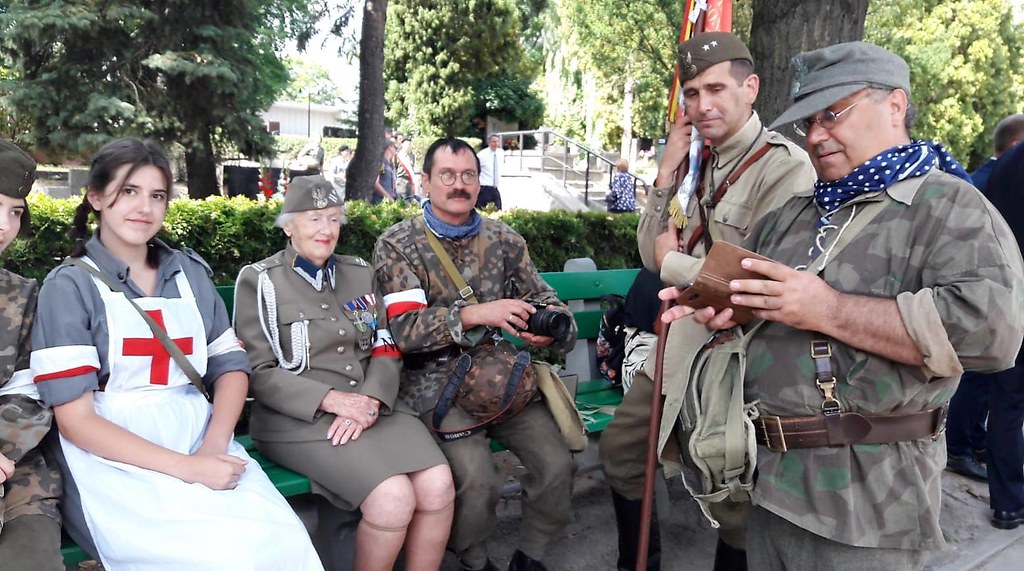 Spanish reenactors this Wednesday at Powązki Military Cemetery in Warsaw, next to a veteran of the Uprising: Maria Irena Biedermann, “Myszka”. Maria was a paramedic of the “Mączyński” Battalion of the Narodowe Siły Zbrojne (NSZ, National Armed Forces), one of the Polish resistance organizations loyal to the Government of Poland in exile: “she was a nurse at the Wola Campaign Hospital, and He told us, among other things, what happened when the Kaminski Brigade Ukrainians took the hospital,” PFTF comments. Also known as SS Sturmbrigade RONA, members of this German armed forces unit were implicated in numerous atrocities during the Warsaw Uprising. 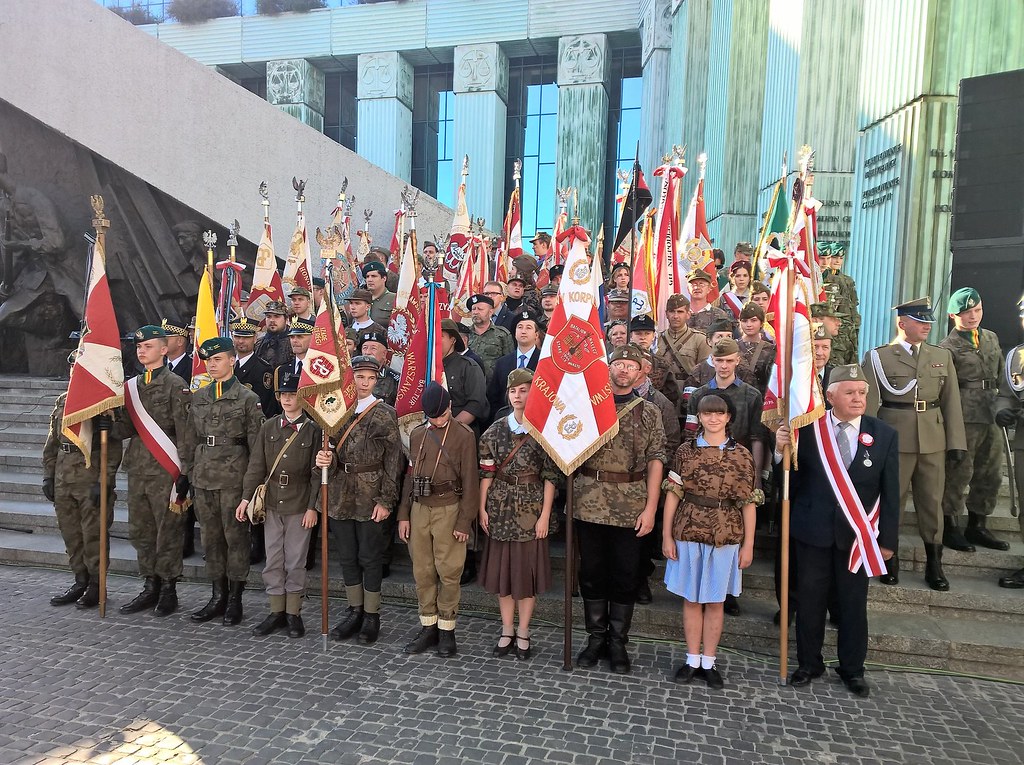 The Spaniards of PFTF (on the right) and Polish reenactors next to the Warsaw Uprising monument, in Krasinski Square, this Wednesday afternoon. There they attended a campaign Mass. 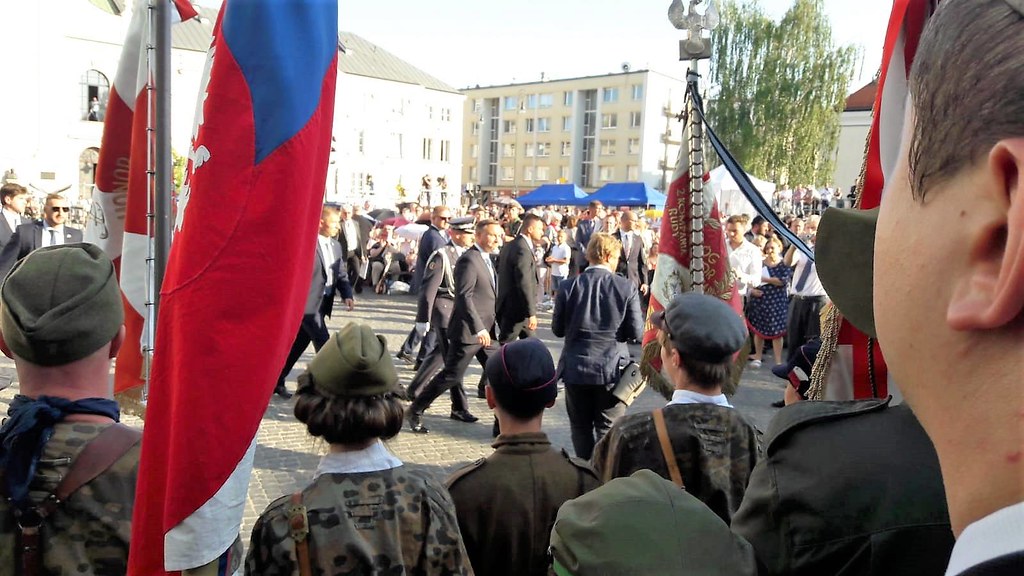 This event was attended by the President of the Republic of Poland, Andrzej Duda (in the center of the photo). After Mass, an Apel Poległych (Appeal to the Fallen) was celebrated in that square, a ceremonial of which I already spoke to you here. 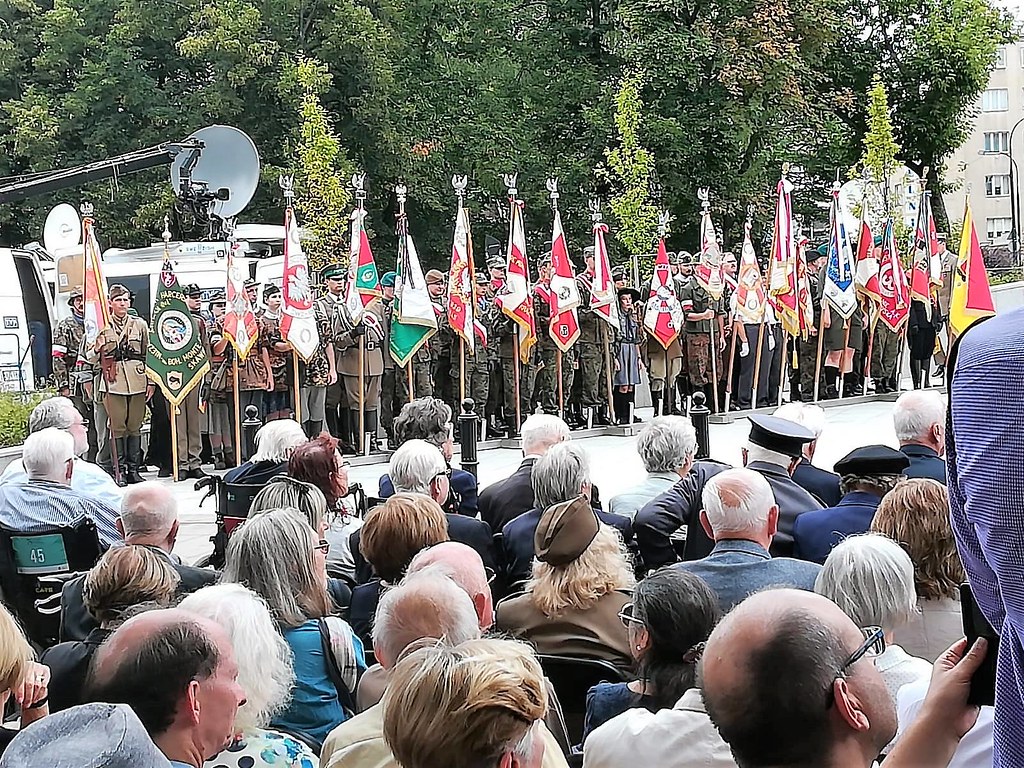 PFTF Spaniards (left) with Polish reenactors at General Gustaw Orlicz-Dreszer Park, this thursday, where they paid tribute to the Polish insurgents who fought in the Mokotów district during the Warsaw Uprising. 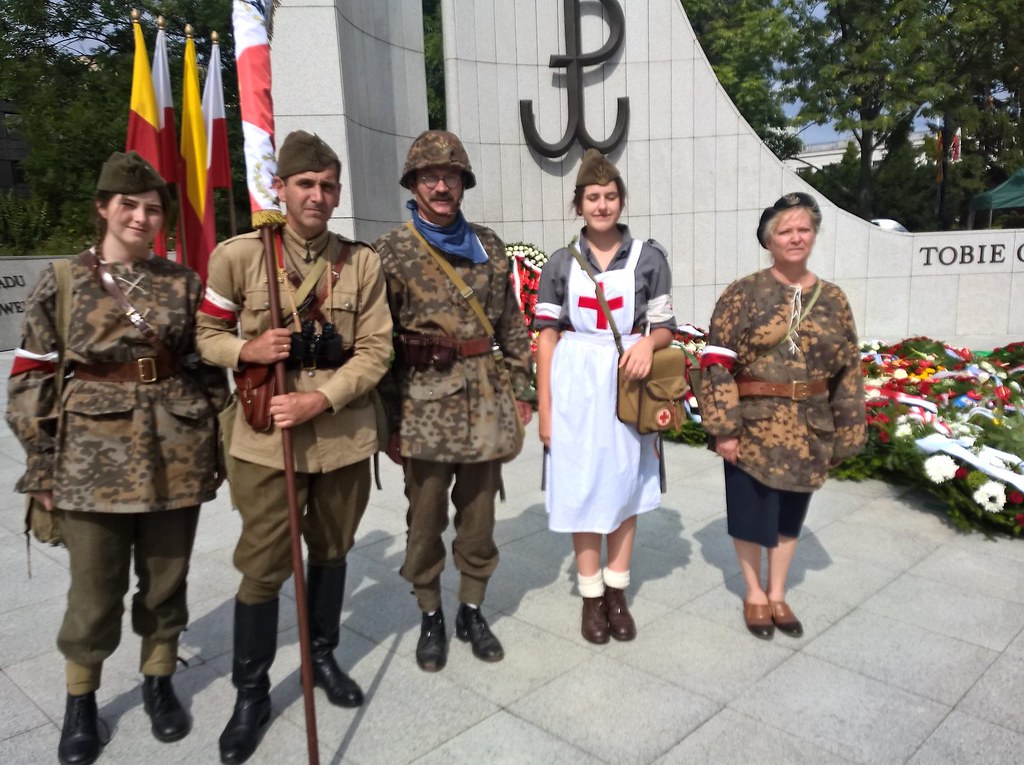 Members of Poland First to Fight next to the Armia Krajowa Monument, located at the crossroads of Wiejska and Matejki streets, very close to the Chancellery. 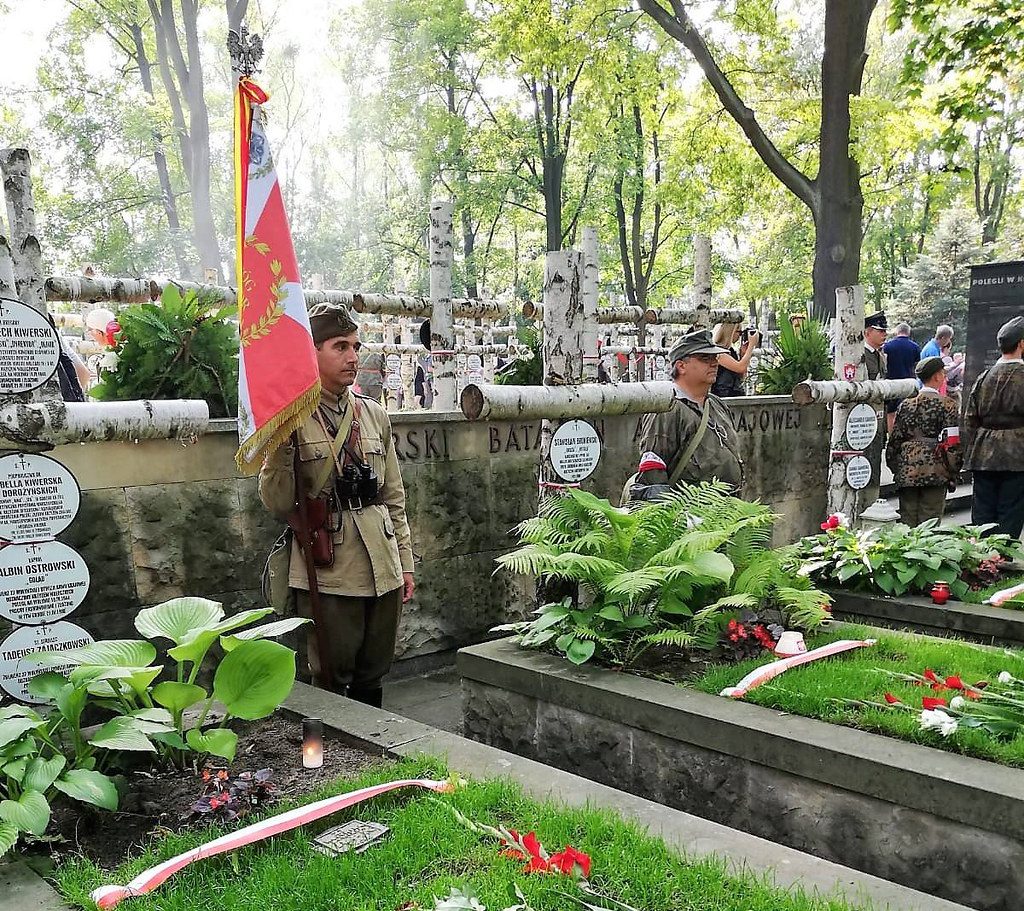 This group of Spaniards returned yesterday to the Powązki Military Cemetery, where they celebrated W time, at 5:00 p.m. It was at that time that the Uprising began on August 1, 1944. In this forum we see on the left the president of Poland First to Fight, Alberto Gómez Trujillo, bearing the banner of the Spanish association, which bears the motto in the center of the Polish Army: “Bóg, Honor, Ojczyzna” (God, Honor, Homeland). 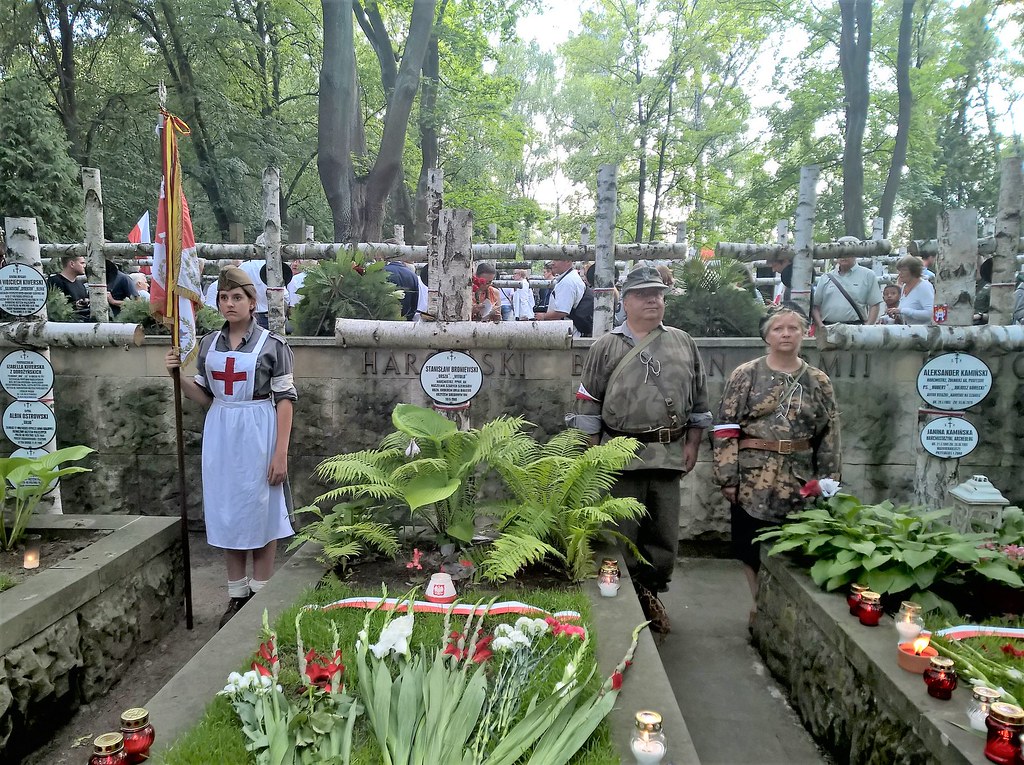 Members of PFTF next to the tomb of Commander Stanisław Broniewski “Orsza” at Powązki Military Cemetery. Broniewski was one of the organizers of the Szare Szeregi (Gray Ranks) of Armia Krajowa, of which I spoke here yesterday. This part of the cemetery is dedicated to the members of the “Zośka” Battalion of the AK. 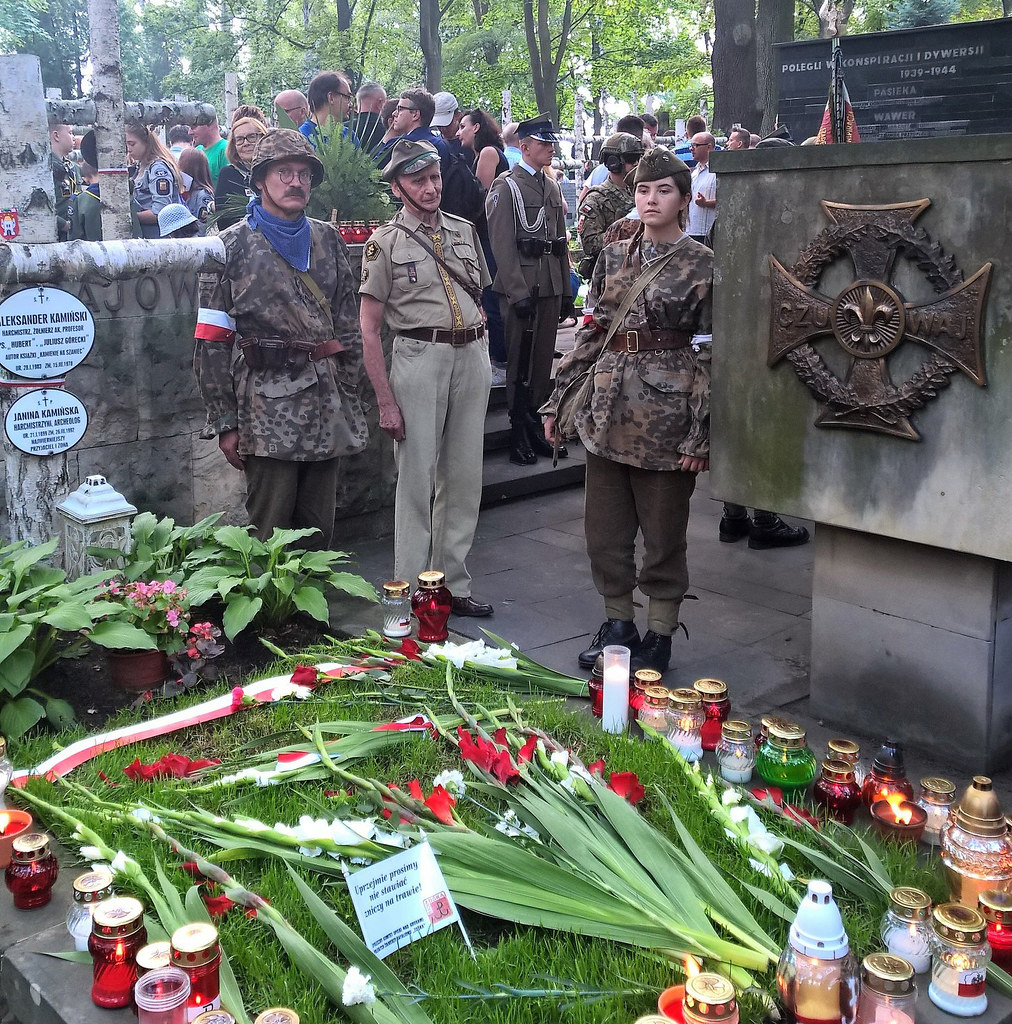 Spanish reenactors next to the grave of Alexander Kamiński “Hubert” in the Powązki Military Cemetery. Kamiński edited the “Biuletynu Informacyjnego” (Information Bulletin) during the Warsaw Uprising. In 1991, the Yad Vashem Institute of Israel granted him the title of “Righteous Among the Nations” for the help he gave to the Jewish resistance during the German occupation of Poland. His wife, Janina Kamińska, instructor of the Polish Scout movement and archaeologist, is buried next to him.