Polish Government distinguishes them for their work promoting Poland

Yesterday Poland celebrated its Independence Day, recovered 99 years ago at the end of the World War I. For this reason, a reception was held at the Polish Embassy in Madrid. 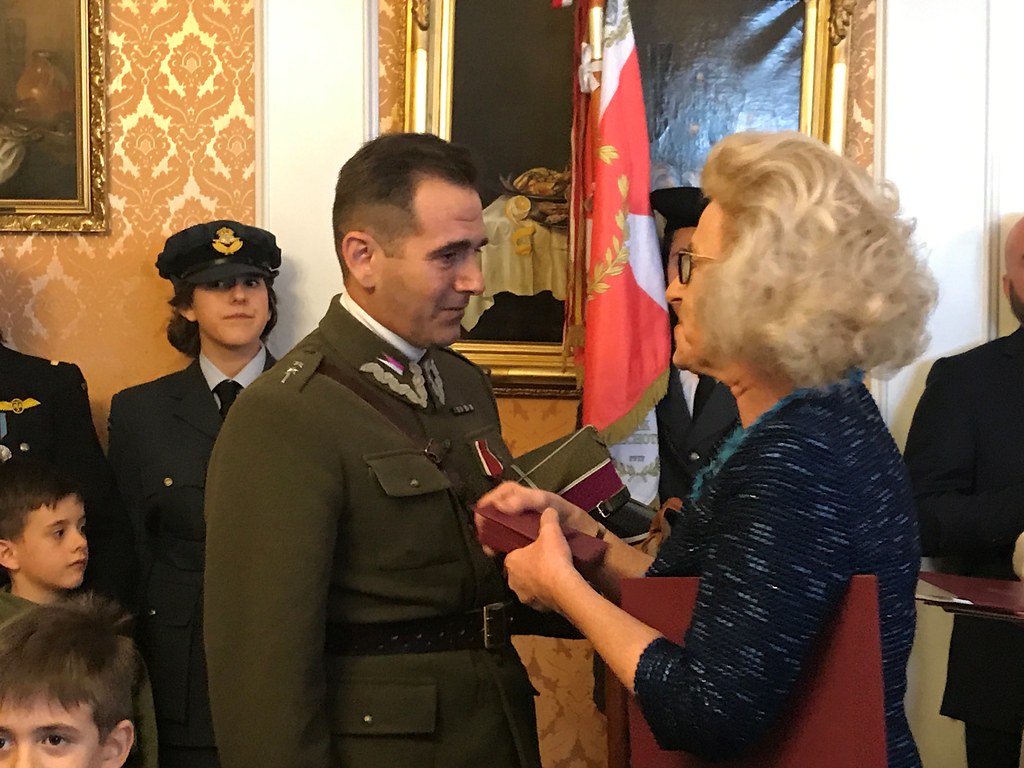 During this reception, the Polish Ambassador to Spain, Marzenna Adamczyk, presented the award "Bene merito" to Alberto Gómez Trujillo, president of the Historical-Cultural Association Poland First To Fight, an entity founded in 2008 and whose purpose is to give to know the history of the fight of Poland in defense of freedom, mainly with historical reenactments, but also with conferences and exhibitions. The "Bene merito" award is an honorary distinction that the Polish Ministry of Foreign Affairs gives to the citizens of the Republic of Poland and to foreign citizens "in recognition of their merits in promoting Poland abroad". Alberto has spent years conjugating his love for Spain with his love for Poland, helping to bring both countries closer through an intense informative work. I have the honor of having him among my friends, so this decoration makes me especially proud of him. Congratulations, Alberto! 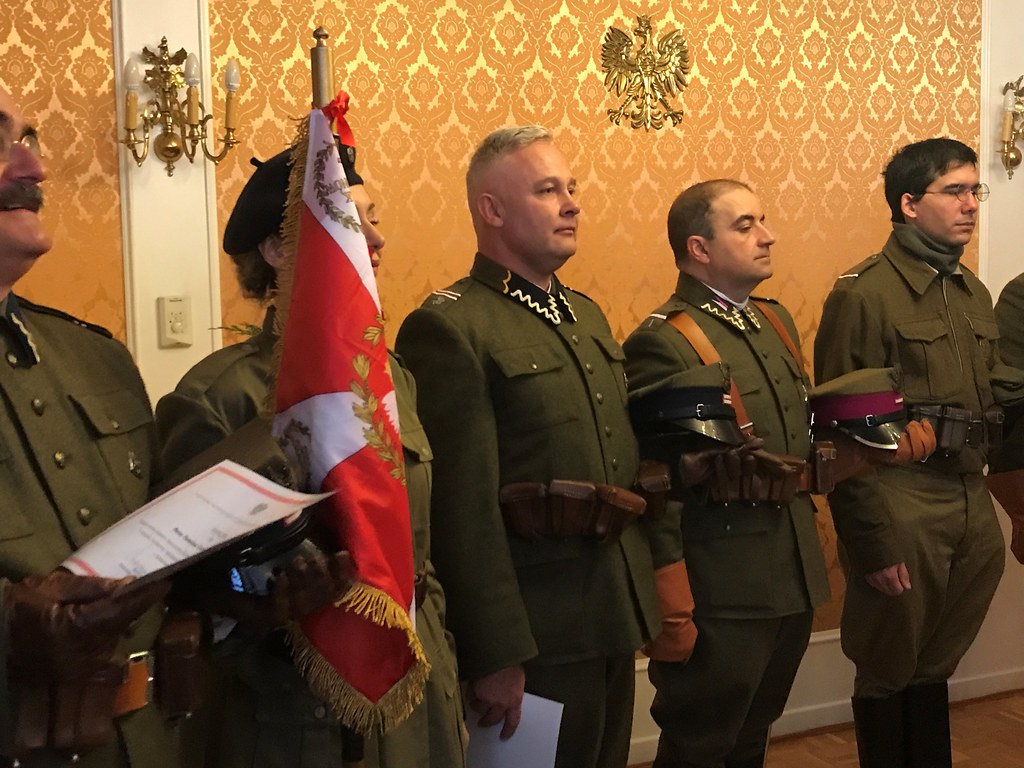 In yesterday's ceremony, the Polish Ambassador also awarded 21 members of Poland First to Fight with Diplomas of Honor for the Promotion of Poland in the World, a distinction granted by the Polish Foreign Minister annually from 1970 "for outstanding contributions to the promotion of Poland worldwide". Since 1999 these diplomas have also been granted to foreign citizens who "contribute to the creation of a recognizable and objective image of Poland in Europe and beyond". Being an association formed by Spanish and Polish citizens, among the 21 awarded with this diploma yesterday at the Embassy there are citizens of both countries. In this post I show some photos of the act published yesterday by the Polish Embassy on its Twitter account and others that the Poland First to Fight association has sent me. Below these lines, we see an image of the public attending the reception, including people dressed in traditional Polish costumes. 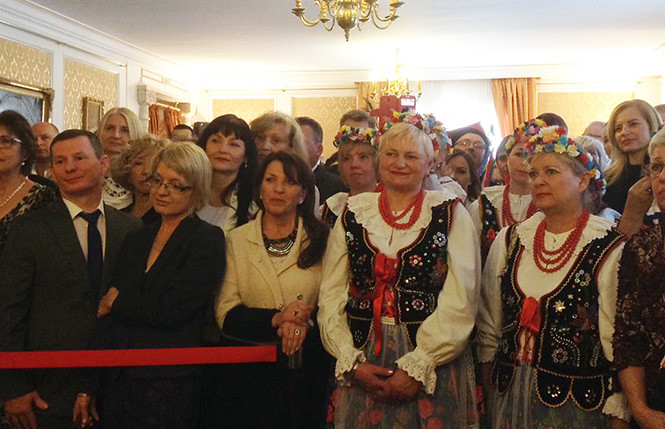 Members of Poland First to Fight attended this reception with uniforms worn by Polish fighters in World War II and also in the struggle against Soviet occupation in the postwar years. These uniforms are used in the historical reenactments through which this association stages different episodes of the war, such as the German-Soviet invasion of 1939 or the Warsaw Uprising of 1944. Precisely, yesterday at the reception the members of Poland First to Fight counted with the presence of Jerzy Radlodski, veteran of the Armia Krajowa (main organization of the Polish resistance in the World War II) and of the 1st Polish Armored Division, awarded with the order of Polonia Restituta and honorary member of this Spanish association (he appears in the following photo, on the left). 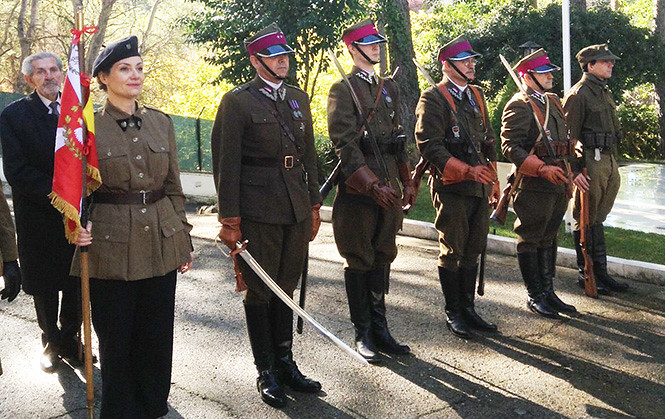 As a final note, I am one of the winners of the Diploma of Honor for the Promotion of Poland in the World, although I could not be in Madrid yesterday to pick up the diploma. As a member of the association, I am surely the one who has done least to deserve the diploma, although the day they gave me the news I felt very excited. To receive a distinction like this from a great Nation like Poland is a great honor. My congratulations to my colleagues from Poland First to Fight for this distinction and my deep gratitude for having me among them. This distinction is a stimulus to continue strengthening ties between our homeland, Spain, and Poland, the birthplace of heroes such as Jan III Sobieski, Tadeusz Kościuszko, Ignacy Skorupka, Witold Pilecki and Jerzy Popiełuszko, and saints of the stature of St. Maximilian Kolbe and St. John Paul II. A Nation worthy of admiration.

P.S.: You can see here a series of photos of the event that Poland First to Fight sent me: