Fires in the Amazon: revealing data that exposes the left-wing media and politicians

If we rely on some media and some politicians, the Brazilian part of the Amazon is being razed by fire because of the coming to power of right-wing politician Jair Bolsonaro.

Touching photos of a small dead monkey, a charred rabbit and other affected animals have spread rapidly on social media. Terrible images of fires are also spreading in Brazil. How not to be moved by such horror? Actually, the photos of the monkeys and the rabbit are from forest fires in California in 2018, and other photos of the burning Amazon that are shown as current are from years ago (an example is the one that heads this post, taken by the photographer American Loren McIntyre, died in 2003, but that many are sharing as if it were current). Many of those photos are from when the Communist Workers Party ruled in Brazil, and some are not even from the Amazon. Where do those photos take who put them into circulation? Do they not know their origin, and use them to misinform? On the other hand, why were there not these political and media reactions when governing the left in Brazil? Maybe there were fewer fires then?

NASA notes that the activity of fires is usual in Brazil

A few days ago, NASA published a revealing report publishing images of the Aqua satellite taken on August 11 and 13 about fires in the Brazilian Amazon. The report was updated this Thursday. Right now he points out the following: “As of August 16, 2019, an analysis of NASA satellite data indicated that total fire activity across the Amazon basin this year has been close to the average in comparison to the past 15 years.“ That is to say, that the activity of fires in Brazil is being similar to what existed when the far-left governed. Why is this stir now mounted that did not mount when the PT ruled?

In proportion Venezuela and Bolivia are being much more affected

The National Institute of Space Research (INPE) has also published information on this issue. The data reflects the foci of forest fires in the last seven years in the countries of South America. This year’s data in Brazil is remarkably high: 76,720 outbreaks. But the number of outbreaks in Bolivia (17,435) and especially in Venezuela (26,495) is also remarkably high. To give us an idea, with an area equivalent to 10.76% of what Brazil has, Venezuela already reaches this year a number of photos equivalent to 34.53% of those in that neighboring country. Likewise, the area of Bolivia is equivalent to 12.9% of that of Brazil, but its number of foci is equivalent to 22.72% of what its neighbor is suffering. In other words: in proportion to its surface, fires are affecting Venezuela and Bolivia much more than Brazil, but only Brazil is talked about. Maybe because in Bolivia and Venezuela the far-left governs?

The revealing data of the GFED on the number of outbreaks: the largest was in 2005

The data of the Global Fire Emissions Database (GFED), a research project that NASA links in the aforementioned report and is dedicated to collecting data from the US space agency, is also interesting. In their tables we can see the monthly numbers of fire foci throughout the Amazon in the last 16 years (the thick green line corresponds to those of 2019): 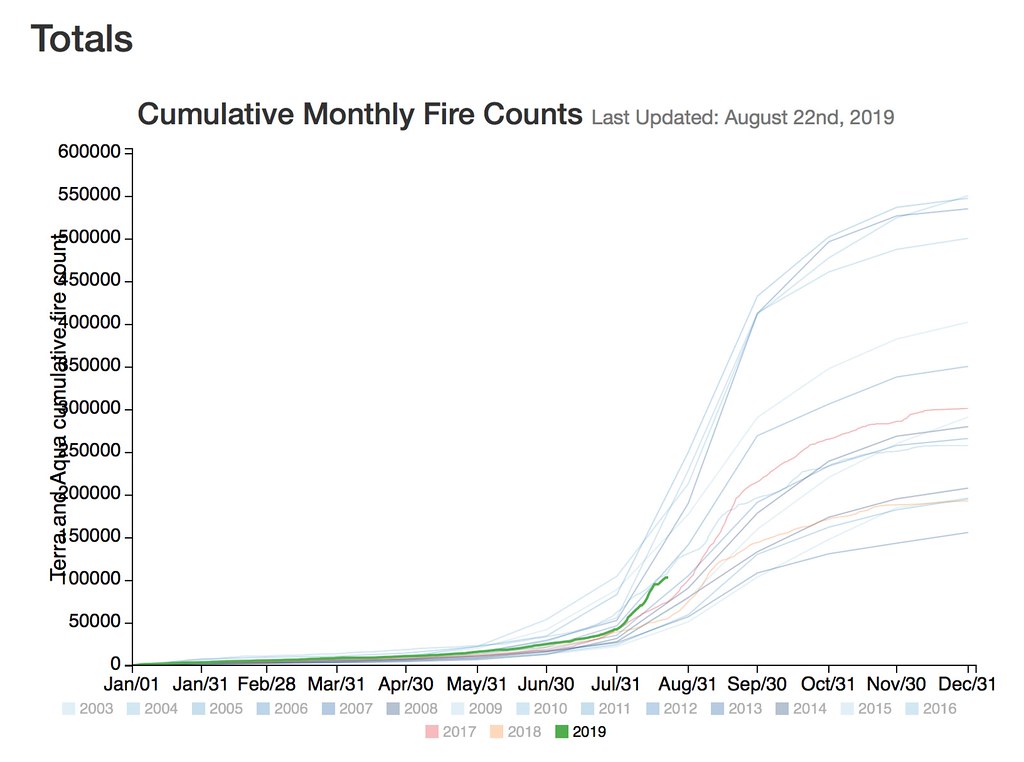 As we can see, the number of foci of 2019 is not being the highest nor by any means: it was the number of 2005, the year I show highlighted below: 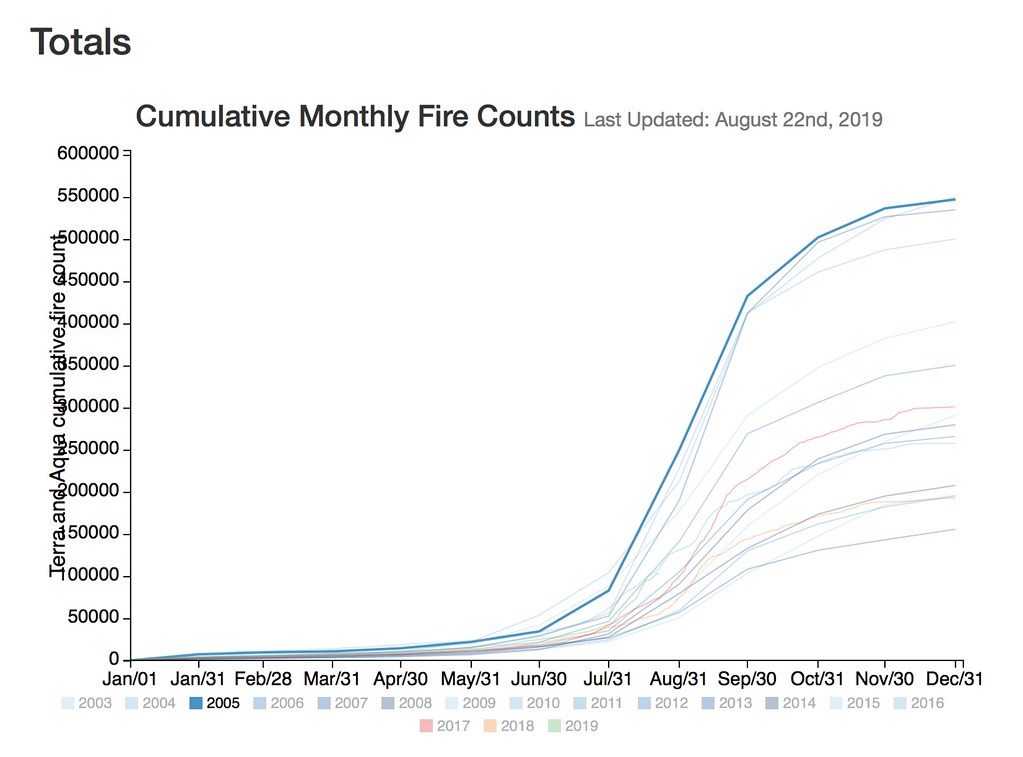 Why was there no international media and political controversy in 2005? Well, maybe because then the far-leftist Lula da Silva had been in power in Brazil for two years, and in the rest of the Amazon he ruled the left (Alejandro Toledo in Peru) and the far-left (Álvaro García Linera in Bolivia and Hugo Chávez in Venezuela). Then the left and the extreme left – and their media terminals – cared little or nothing for the Amazon to burn, because they would have to ask those friendly rulers for accounts. Now the thing has changed in Brazil.

In Bolivia, there is a much larger number of bulbs than usual

Incidentally, what the GFED data also reveals is that this year it is being one of the ones that have been most registered in the department of Santa Cruz in Bolivia, as this graphic shows: 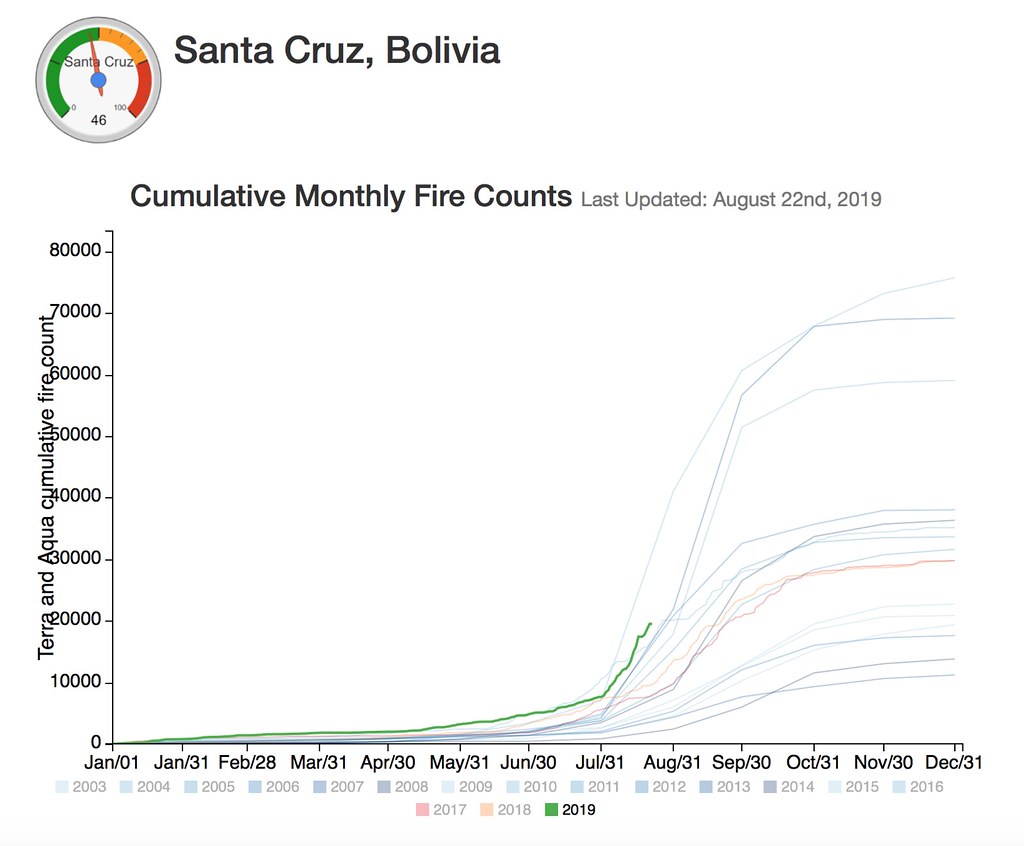 Right now, the number of outbreaks in that department is being so high that it is only surpassed by the 2010 data. In fact, the Europa Press agency published yesterday that this wave of fires began two weeks ago in Bolivia, extending to Brazil and Peru. When the wave started almost nobody said anything about the fires in Bolivia. And now, as in 2010, the far-leftist Evo Morales governs in Bolivia, and perhaps that is why the left does not cry against its fires. And that despite the fact, that Morales promulgated on July 9 Supreme Decree 3973 that allowed the controlled burning of forests in the Amazonian departments of Santa Cruz and Beni: it is precisely where this wave of fires began two weeks ago.

On the other hand, according to data of the INPE, this year have already burned 18,629 square kilometers of Amazonian forest in Brazil. It is a terrible fact. To get an idea, it is as if the entire surface of the Canary Islands and the Region of Murcia have burned together. However, there have been much worse years in the Brazilian Amazon, as this table published by the INPE shows:

As we can see, the worst data of the last 17 years was that of 2005, with more than 160,000 square kilometers razed. It is almost as if the entire surface of Andalusia and Castilla-La Mancha (two of the largest Spanish regions) have burned together. But then the left-wing politicians and the media did not blame the Brazilian government: maybe because it ruled the far-left?

Of course, for the far-left all this data is left over. It is campaigning against the Brazilian Government and against capitalism, and that is all that matters. Proof of this is this message published yesterday by the Spanish communists of Izquierda Unida blaming capitalism for the fires:

This is the level of the far-left … One might ask if in the communist countries there have never been forest fires, or if the fires in Venezuela and Bolivia are also the fault of the capitalists, since in both countries the far-left governs. But they don’t give a damn. Communism has used the lie as a political weapon for many years and does not intend to renounce it.

A photo of a fire in the Amazon taken by the American photographer Loren McIntyre, who died in 2003. Some are spreading it as if it were current.