What is behind the incident between Bolivia and Spain: the Sánchez's dangerous friendships

This Friday morning, a serious diplomatic incident occurred in La Paz, Bolivia, which was echoed by Spanish media on Saturday, very unevenly. What happened?

This Friday, the Ministry of Foreign Affairs of Bolivia published a statement denouncing that "people who have been identified as officials of the Spanish Embassy in Bolivia, accompanied by people with their faces covered, attempted to enter the diplomatic residence in a surreptitious and clandestine manner of Mexico in La Paz." According to the statement, the Bolivian Police "stopped the entry of vehicles to the facilities, since the presence of people with faces covered in the condominium represented a potential threat. The diplomatic staff of the Embassy of Spain freely entered the Mexican diplomatic residence and their dignity was respected at all times and their personal security was protected." In addition, the Bolivian Foreign Ministry said:

"The diplomatic and security personnel of the Embassy of Spain in Bolivia are not authorized to carry firearms, nor wear outfits that hide their identity. These acts contravene the most fundamental diplomatic practices and violate the principle of inviolability, considering also that they used vehicles with diplomatic plates assigned to the Embassy of Spain, misusing the immunities, privileges and guarantees that the Bolivian State recognizes and grants to any Diplomatic Mission accredited in the country."

The statement adds that these facts "ratify the attitude of interference in the internal affairs of Bolivia by the Government of Mexico and its accredited Embassy in La Paz, whose behaviors are stressing relations between the two countries." As Infobae pointed out on December 23, nine former officials of the Government of Evo Morales, including five of their ministers, are refugees at the Mexican Embassy in La Paz. There is a circumstance that several of them, starting with the former Minister of the Presidency Juan Ramón Quintana, are denounced before the Bolivian Prosecutor for sedition, terrorism and terrorist financing, among other crimes. Yesterday, the Interior Minister of Bolivia, Arturo Murillo, declared: "We fear that what was going to be done was to take out a common criminal such as Juan Ramón Quintana; This has been aborted."

The Spanish Foreign Ministry says it was a "courtesy" visit

This same Friday the images of what happened were broadcast in Bolivia, which you can see in the following video, which also includes a statement by Bolivian Foreign Minister Karen Longaric. In the images you can see the two vehicles that were retained and that were occupied by officials of the Embassy of Spain, and that were rebuked by some people - supposedly neighbors - who felt alarmed when they saw them:

According to the Spanish newspaper El Mundo, the masked men were four police officers from the Special Operations Group (GEO) of the National Police. On the other hand, shortly after midnight from Friday to Saturday, the Spanish Ministry of Foreign Affairs published a statement announcing an investigation into these events during "the visit of the ad interim Business Manager of Spain in Bolivia to the Ambassador of Mexico in that country", and pointing out that "the purpose of the visit made by the Chargé d'affaires of Spain was exclusively courtesy and strongly denies that it could be aimed at facilitating the exit of people who are isolated in those units."

The opposition in Spain asks for explanations: Vox asks if the refugees by Mexico were contacted

Vox has already announced that it will register a battery of questions to the Government on Monday. Among other things, the party presiding by Santiago Abascal will ask if the Business Manager of the Embassy of Spain made that visit on her own initiative or following orders, and if she maintained contact during the same with the refugees at the Mexican Embassy and who are denounced before the Bolivian Justice. In addition, Vox also asks if the former Spanish president Rodríguez Zapatero, a well-known supporter of the regimes of Evo Morales and Nicolás Maduro, "has had some participation in the events that led to the visit." The Popular Party has also requested the appearance of the acting Foreign Minister, Margarita Robles. 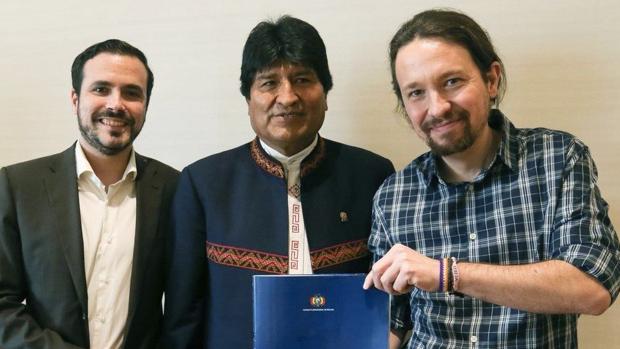 The leader of the Spanish left-wing party Podemos, Pablo Iglesias (right) and his partner the communist Alberto Garzón, coordinator of the Izquierda Unida (United Left), together with the then president of Bolivia Evo Morales in March 2018. Podemos has continued to support Morales even after his resignation after the electoral fraud scandal in the Bolivian general elections of October (Photo: Efe).

Significantly, the far-left party Podemos, an ally of the socialist government of Pedro Sánchez and related to the regimes of Morales and Maduro, has maintained absolute silence about these events. Precisely yesterday, the Bolivian former president Jorge 'Tuto' Quiroga said that Sánchez and Podemos "are dead of fear because from Bolivia and Venezuela the enormous amount of money stolen from our countries by these gentlemen in the name of constitutional colonialism will be reported." The references to Podemos are related to the investigation being carried out by the Bolivian Prosecutor's Office against the company Neurona Consulting, linked to Juan Carlos Monedero, ideologue of Podemos, who would have received 12 million Bolivians (more than 1.5 million dollars) between 2017 and 2018 for eight contracts made irregularly, according to the spanish media Ok Diario.

As it happens, a few days ago said company deleted its website in full investigation of Bolivian Justice. In fact, yesterday Quiroga pointed out that one of the refugees at the Mexican Embassy, former Minister of Justice Héctor Arce, "was the one who paid tens of thousands of euros of Venezuelan silver and Bolivian silver to Pedro Sánchez's partners, the lords of Podemos." You can see here the full video of the press conference offered yesterday by Quiroga:

It must also be remembered that in November Pablo Iglesias, leader of Podemos, supported Evo Morales after his resignation after an enormous scandal of electoral fraud broke out in the Bolivian general elections of October 20. Podemos even asks the Government of Sanchez to offer asylum to Evo Morales, describing as "coup d'etat" the exit of the Bolivian ex-president of power after his own resignation for the aforementioned scandal. Both Pablo Iglesias and former president Zapatero participated in February 2018 in an act of support for Evo Morales in Madrid. It is impossible not to see the shadow of the dangerous friendships of Pedro Sánchez and the PSOE in this serious diplomatic crisis. And it is that Sanchez has sought the support of the far-left to govern, regardless of whether Podemos is linked to such sinister regimes as those of Venezuela, Iran, Nicaragua and also a despot like Evo Morales. 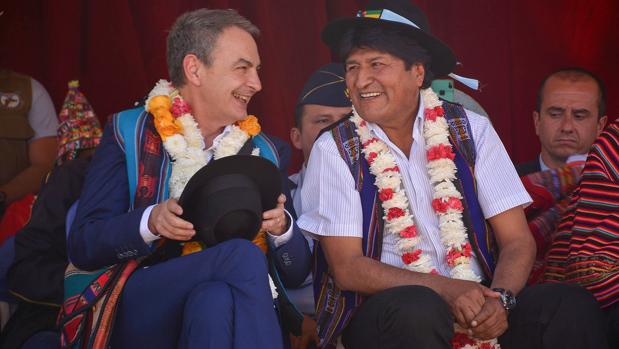 The Spanish socialist expresident and member of the PSOE, José Luis Rodríguez Zapatero, together with Evo Morales in Bolivia in July 2019. Zapatero has become one of the greatest Spanish defenders of ultra-left regimes in Latin America (Photo: Efe).

What was a Spanish diplomat doing at that embassy in full tension between Bolivia and Mexico?

Despite what the Bolivian Foreign Ministry said, that Spanish policemen were masked is not the serious thing about this incident. After all, they are members of the GEO and their identities are reserved matter. Whether they were armed or not is something that should be clarified, but in any case, these police are limited to fulfilling orders. The important thing about this issue is what a Spanish diplomat painted while visiting the Mexican Embassy in full tension between that country and Bolivia, knowing - because local media had been publishing it for days - that the Mexican legation is guarded by the Bolivian Police given shelter to people accused of very serious crimes.

To this incident must be added the embarrassing escape of Spain a month and a half ago of the former Venezuelan intelligence chief Hugo Carvajal, accused of drug trafficking by the United States. Washington labeled this escape - with reason - of "a great shame, of course, for the Spanish Government." This embarrassing incident also caused a scandal among the Spanish opposition: Vox President Santiago Abascal said he suspected Sánchez had facilitated that escape "to please Pablo Iglesias." 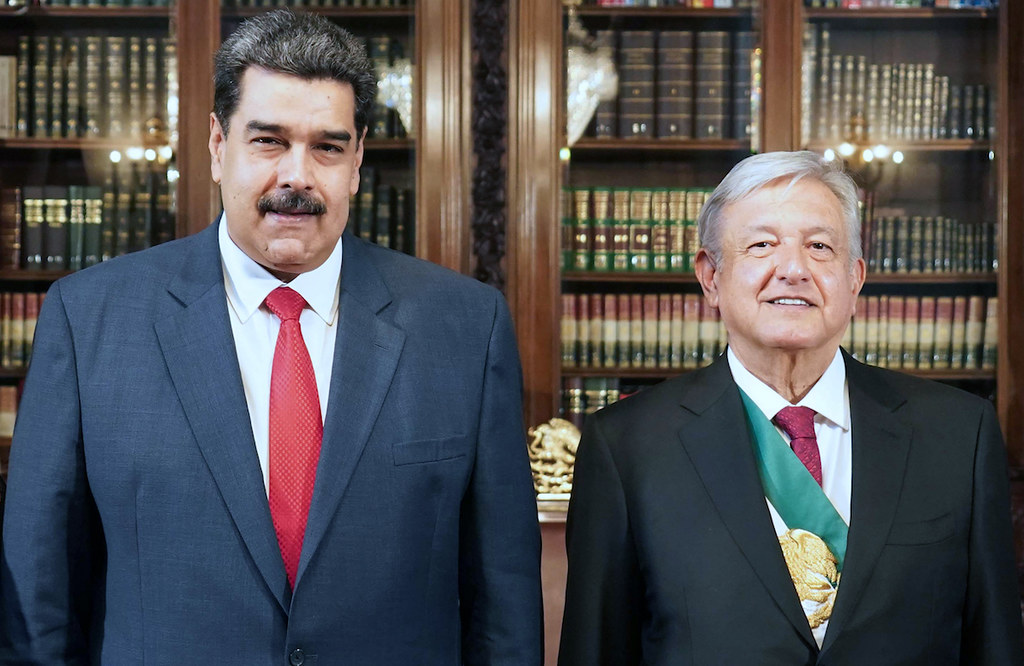 The president of Mexico, Andrés Manuel López Obrador (also known as AMLO), with the Venezuelan dictator Nicolás Maduro a year ago. López Obrador has become one of the few allies of the Chavista dictatorship in Latin America (Photo: AFP).

Recall that Carvajal had facilitated the transport of 5.6 tons of cocaine from Venezuela to Mexico, and that drug trafficking to and from Venezuela has increased more than 50% with Nicolás Maduro, which has turned the Chavist regime into a narco-dictatorship. Coincidentally, the president of Mexico, the far-leftist López Obrador, who supports the Maduro regime, announced in February that he would put an end to Mexico's war on drug trafficking, a statement that sparked the controversy inside and outside that country.

Certainly, the international friendships of the Spanish left stink more and more, and the scandals are accumulating, causing the discredit of Spain to the world.

Main photo: La Moncloa. The then president of Bolivia, Evo Morales, imposing the Spanish president, Pedro Sánchez, the Condor Order of the Andes, on Wednesday, August 29, 2018.