100 years since the birth of Saint John Paul II: the Pope of Freedom

On this day in 1920, in a Poland threatened by a Soviet invasion, the child Karol Józef Wojtyła, the son of Karol Wojtyła and Emilia Kaczorowska, was born in Wadowice.

A priest who worked in a quarry

Karol suffered the German occupation of Poland from September 1939, during which he worked in a quarry and in a chemical factory, eventually being sought by the Gestapo, the fearsome political police of the Adolf Hitler dictatorship. Karol entered a clandestine seminary in 1943, being ordained a priest in 1946 under a new occupation, in this case that of the Soviet dictatorship. In 1958 he was consecrated as auxiliary bishop of Krakow by Pope Pius XII, being consecrated as archbishop of that same diocese in 1962 by Pope Paul VI. Karol was only 42 at the time and a brilliant man known for his optimism. Soon the Polish Communist dictatorship fixed their eyes on him, even spying on him in his confessional. 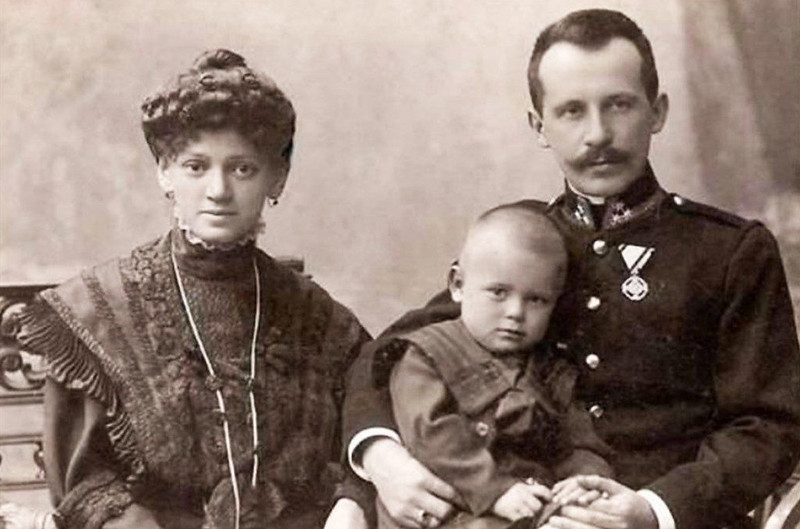 ELittle Karol with his parents, Karol Wojtyła and Emilia Kaczorowska. Karol’s father had been an officer in the Austro-Hungarian Army and later became a captain in the Polish Army. Her mother was of Lithuanian origin. Recently the process of beatification of both began.

His election as Pope and his first trip to Poland

Appointed cardinal in 1967, Karol was elected Pope on October 16, 1978 after the death of John Paul I, thus becoming the first Polish and Slavic pontiff in the history of the Catholic Church. His election sparked colossal joy among his Polish compatriots, and also deep concern among the leaders of the Soviet bloc, as Archbishop Wojtyła had been noted for his steadfast character in the face of the communist dictatorship. One of the first of many trips he would make during his pontificate was precisely to his native land. On June 2, 1979, John Paul II arrived in Warsaw, becoming the first pope to visit a communist dictatorship, being received by more than a million people. In the Jasna Gora sanctuary, the Pope consecrated his native country and all nations to the Virgin of Czestochowa, the Patroness of Poland. 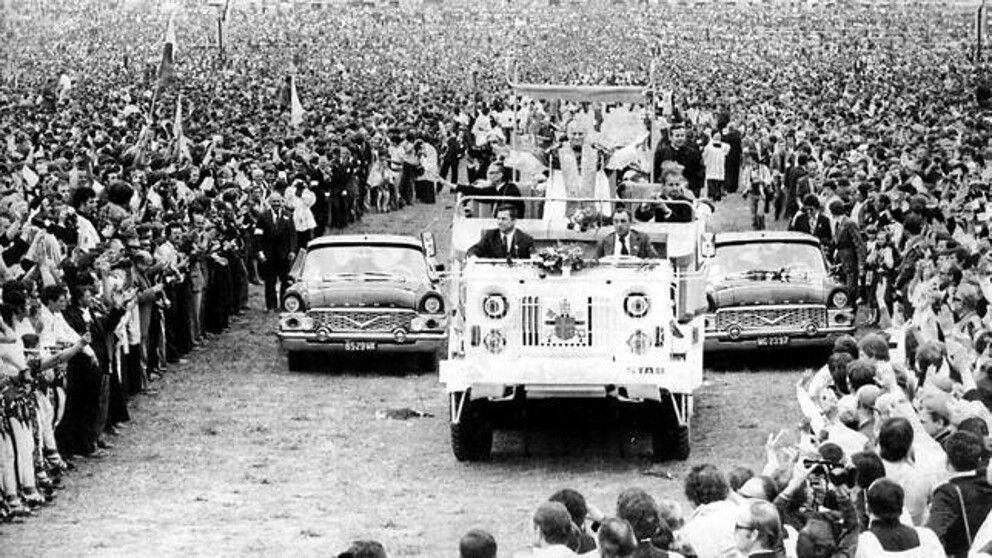 John Paul II on his first trip as Pope to his native Poland in early June 1979. He was received by more than a million people. In the sanctuary of Jasna Gora he consecrated his Homeland and all the Nations to the Virgin of Czestochowa, Patroness of Poland.

A seed of Freedom that communism tried to pluck through violence

A seed of Freedom had begun to germinate and would eventually flourish throughout the Soviet bloc. Totalitarians tried to stop that movement through violence. On May 13, 1981 the Pope suffered an assassination attempt at the hands of Ali Agca, an attack that was encouraged by the Soviet Union and from which the pontifex miraculously managed to survive, attributing that fact to the Virgin of Fatima, whose festivity was celebrated on that day. In addition, in December 1981 the Polish Communist dictatorship declared martial law, which lasted more than a year and a half and would result in 91 people being killed and thousands arrested, in a desperate attempt by the regime to curb the Catholic union Solidarność. 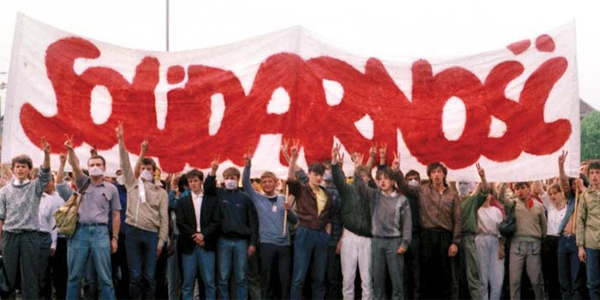 Members of the Polish Catholic union Solidarność (Solidarity), which played a major role in the fall of communism in Poland. John Paul II gave his support to this movement.

A peaceful revolution that ended up sinking communism in Europe

The Pope’s support for this movement would be essential to undermine that dictatorship, which would end up falling in the summer of 1989, making Poland the first European country to free itself from the communist yoke after 45 years (the People’s Republic Polish, puppet of the USSR, had been established in 1944 with the arrival of the Red Army in the country). In October 1989 the communist dictatorship of Hungary collapsed, a country historically twinned with Poland. A few weeks later the Berlin Wall fell. The Polish Pope, with his Christian message of love and hope and with his strength and firmness against communist tyranny, had triggered a peaceful revolution that ended up sinking the Soviet empire in Eastern Europe. In 1987, John Paul II had embodied the basis for that change in a letter to the President of the United States, Ronald Reagan:

Both Reagan and Wojtyła played a fundamental role in the fall of communism in Europe. Significantly, in addition to the rejection of communism and the Christian faith, both shared a devotion to the Virgin of Fatima, and that being the President of the United States a Presbyterian. Precisely, on a visit to the Portuguese sanctuary in 1985, Reagan referred to the Polish Pope with these words: “No one has done more to remind the world of the truth of human dignity — as well as the truth that peace and justice begin with each of us”, noting that “in the example of men like himself and in the prayers of simple people everywhere — simple people like the children of Fatima — there resides more power than in all the great armies and statesmen of the world.” 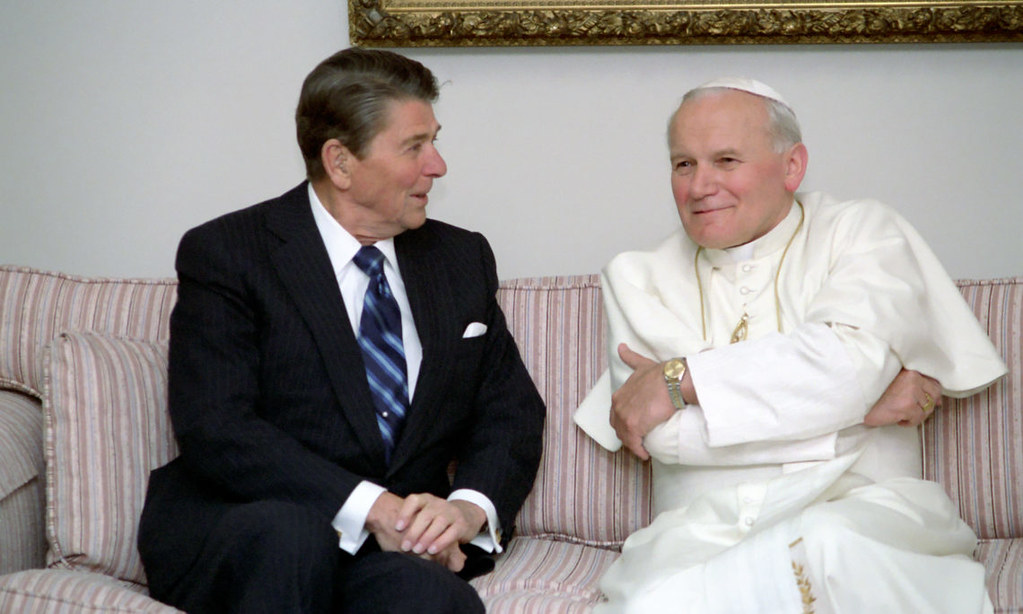 The then President of the United States, Ronald Reagan, with John Paul II at the Fairbanks Airport, Alaska, on February 5, 1984 (Photo: US Embassy to the Holy See).

The words of European statesmen about Saint John Paul II

Today, Saint John Paul II is gratefully remembered by millions of people who suffered from communist oppression. In March 2019, Hungarian Prime Minister Viktor Orbán stated: “Without Poles, Hungary would not be free today, and Europe could not have been reunified. The Polish people gave us Pope Saint John Paul II, and they also gave us the Solidarity movement. With this you changed the course of history, and we were able to regain our freedom and the independence of our nations.” 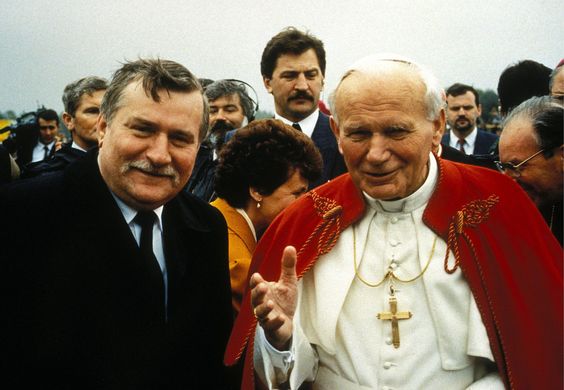 Lech Wałęsa, leader of the Polish Catholic union Solidarność and former president of Poland, recalls the first trip of the Polish Pope to his Homeland: “when he came to visit Poland, hundreds of thousands of people took to the streets. Even the communist leaders, who knelt before the Pope; many had forgotten how to make the sign of the cross, but they did it to them. The Pope was a gift from God, he made us regain confidence in basic values, such as the power of truth. I had twenty years of activism and had forty collaborators, then I had forty thousand. The year after the Pope’s visit, we reached ten million members out of 12 million workers. The Pope woke up Poland and we took advantage of it.”

Václav Havel, former President of the Czech Republic and one of the architects of the so-called Velvet Revolution in Czechoslovakia in 1989, addressed these words to John Paul II on April 21, 1990, when he became the first Pope to visit Prague: “Into a country devastated by the ideology of hate arrives a messenger of peace. Into a country devastated by the rule of ignorant people, arrives the living symbol of erudition. Into a country until recently damaged by the idea of confrontation and world division, arrives a messenger of peace, dialogue, mutual tolerance, respect and mutual understanding.“

Lithuania’s President Dalia Grybauskaitė wrote in 2014: “John Paul II, a noble and warm hearted person, always spoke the language of freedom, tolerance and respect to fellow men. Being a harsh critic of communism, he strongly supported Lithuania’s independence and spoke out for national self-determination. His works and moral authority contributed immensely to building a unified post-war Europe.” It must be remembered that the mother of John Paul II was of Lithuanian origin. 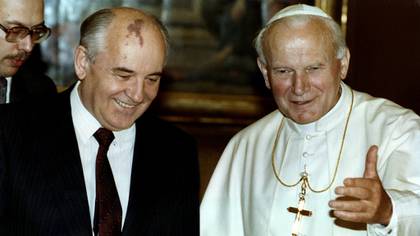 John Paul II with Mikhail Gorbachev in Vatican City on November 18, 1990. The Soviet president supported the process of canonization of the Polish Pope in 2009 (Photo: Reuters).

Curiously, the expressions of respect and admiration for the Polish Pope also include the former Soviet president Mikhail Gorbachev, creator of the opening policy that would end up leading to the disappearance of the USSR. In May 2009, the former communist leader endorsed the canonization of John Paul II with these words: “My opinion is that he must be canonized. He was a formidable personality. A great humanist, the greatest, for me.” After the disappearance of the USSR, the first Russian president, Boris Yeltsin, expressed his wish that John Paul II visit his country, but his successor, Vladomir Putin, never formalized that invitation. 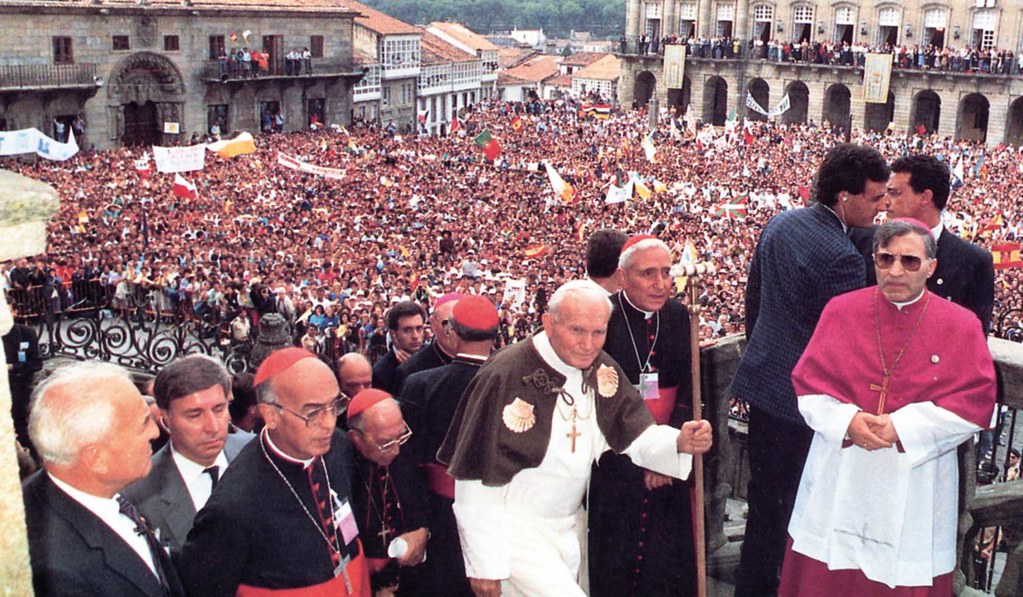 John Paul II on a visit to Santiago de Compostela in 1982. He was the first Pope to enter the Cathedral of that city as a pilgrim. On his fifth and last trip to Spain in 2003, the Polish Pope said goodbye to Spain, defining it as “Land of Mary”.

The most massive farewell a Pope has ever had

On April 8, 2005, the funeral of John Paul II attracted one and a half million pilgrims to Rome, in addition to the attendance of the spiritual leaders of the Anglican Church, the Orthodox Churches of Greece, Ethiopia and Armenia, the president George W. Bush, the King of Spain Juan Carlos I and dozens of Heads of State, presidents and politicians from almost every country in the world, including many from Muslim countries and even a representative of the communist dictatorship of Cuba. It was the most massive funeral a pope has ever had, and one of the largest gatherings of world leaders ever held in all of history. It was a well-deserved worldwide recognition of one of the most important figures in the history of Europe and one of the most influential and decisive personalities of the 20th century. From Spain, which he called “Land of Mary”, I ask the Pope of Freedom to intercede for all of us in these difficult times.