The Polish Pope wept at that grave, covering his face with his hands

An admirable patriotism: the words of John Paul II at the grave of a soldier

“Pozwól mi pójść do Domu Ojca” (let me go to the House of the Father). They were the last words spoken by Saint John Paul II.

The Polish Pope said those words in his native language at three thirty in the afternoon on Saturday, April 2, 2005, on the same day as today 16 years ago. At 9:37 p.m. that day, one of the greatest Popes the Church has ever known left for the Father’s House. Despite being the spiritual leader of Catholics around the world, Karol Wojtyła never forgot his roots and preserved a deep love for his Homeland. That admirable patriotism was reflected in the words he spoke during his first apostolic trip as Pope to Poland on June 2, 1979, when his Nation was still under a communist dictatorship. 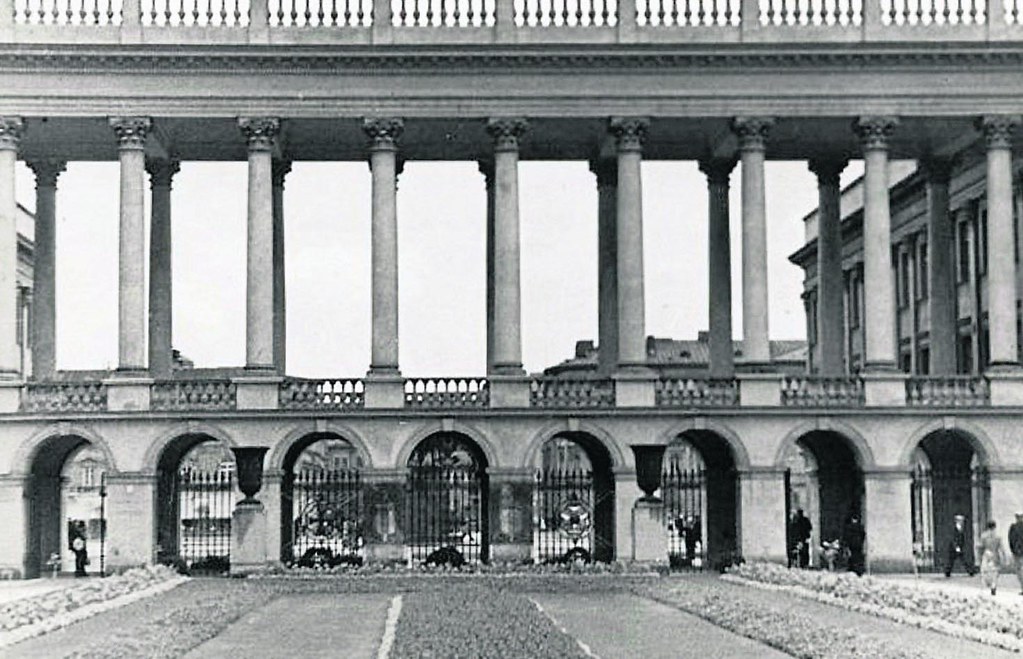 The Saxon Palace in Warsaw before WWII, with the Tomb of the Unknown Soldier below, between its arches (Photo: Inowrocław Nasze Miasto).

On that occasion, Saint John Paul II visited the Tomb of the Unknown Soldier in Warsaw, located in Victory Square (today called Piłsudski Square). This Tomb was created following the example of the one created in Paris in 1920 to pay tribute to the fallen in the First World War. The Warsaw Tomb was inaugurated on November 2, 1925, being located in the arches of the Saxon Palace. The remains of an anonymous soldier buried in the Cemetery of the Defenders of Lwow were deposited there. 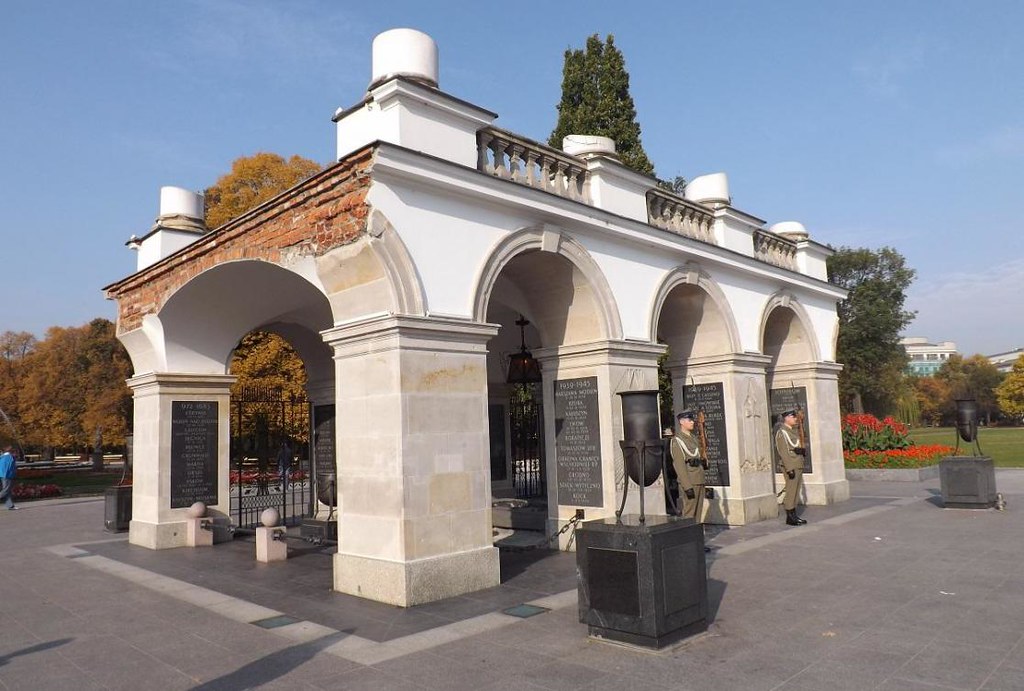 The Tomb of the Unknown Soldier today, with the only remaining arches from the Saxon Palace, destroyed by the Germans in December 1944 (Photo: Polskie Szlaki).

The palace was destroyed by the Germans in December 1944 and today only the arches located near the Tomb remain, which contain 22 tombstones commemorating all the Poles who fell in combat in the successive wars that the country has suffered since 972. The Tomb is guarded at all hours by the Polish Army and in it a permanent flame burns in memory of all the Poles who gave their lives for their homeland. 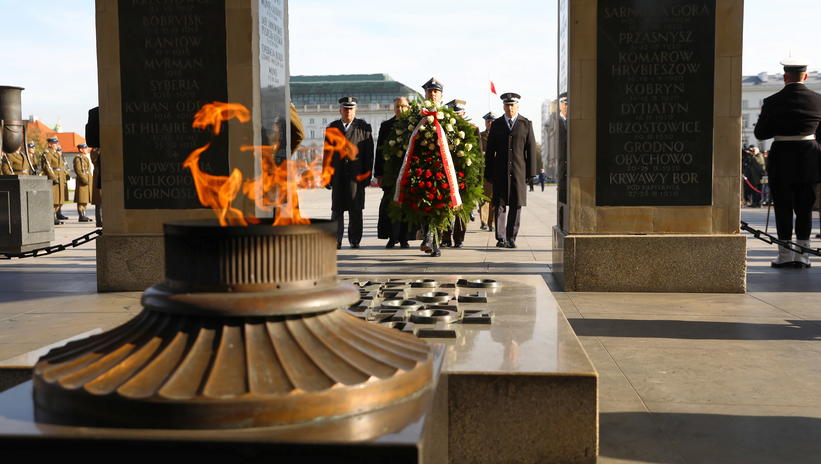 A tribute at the Tomb of the Unknown Soldier in Warsaw (Photo: Polska Agencja Prasowa).

Saint John Paul II knelt before that tomb on the first day of his visit to Poland as Pope. It was one of the first things he wanted to visit when he returned to his homeland. Arturo Mari, photographer for the Vatican daily L ’Osservatore Romano, recalls that he saw the Pope crying at that Tomb. He knelt before her, prayed, touched her, and then covered his face with his hands, saying, “Why so much blood in this holy land? Why did my country have to shed so much blood?” The website of the Holy See preserves these words full of patriotism that Saint John Paul II solemnly pronounced before the public gathered in the square:

“We are before the tomb of the Unknown Soldier. In the ancient and contemporary history of Poland this tomb has a special basis, a special reason for its existence. In how many places in our native land has that soldier fallen! In how many places in Europe and the world has he cried with his death that there can be no just Europe without the independence of Poland marked on its map! On how many battlefields has that solider given witness to the rights of man, indelibly inscribed in the inviolable rights of the people, by falling for “our free­dom and yours”! “Where are their tombs, O Po-land? Where are they not! You know better than anyone—and God knows it in heaven” (A. Oppman, Pacierz za zmarlych).

The history of the motherland written through the tomb of an Unknown Soldier!

All that in the hands of the Mother of God—at the foot of the cross on Calvary and in the Upper Room of Pentecost!

All that —the history of the motherland shaped for a thousand years by the succession of the generations (among them the present generation and the coming generation) and by each son and daughter of the motherland, even if they are anonymous and unknown like the Soldier before whose tomb we are now.

All that —including the history of the peoples that have lived with us and among us, such as those who died in their hundreds of thousands within the walls of the Warsaw ghetto.

All that I embrace in thought and in my heart during this Eucharist and I include it in this unique most holy Sacrifice of Christ, on Victory Square.

And I cry —I who am a Son of the land of Poland and who am also Pope John Paul II —I cry from all the depths of this Millennium, I cry on the vigil of Pentecost: 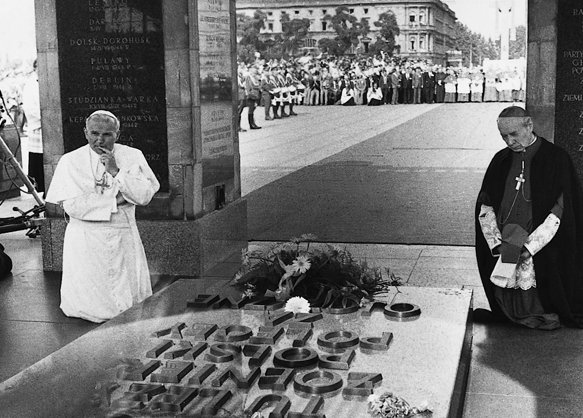 Saint John Paul II during his visit to the Tomb of the Unknown Soldier in Warsaw on June 2, 1979. It was one of the first places he wanted to visit on his first trip to his homeland after being elected Pope (Photo: Wydawnictwo Naukowe PWN).

A historical note: when Saint John Paul II quoted the words “our and your freedom” he was referring to one of the national mottos of Poland, “Za naszą i waszą wolność” (For our and your freedom). It was used for the first time in the Polish Uprising of November 1830 against the Russian Empire, on a white flag with a red Latin cross that read: “W imię Boga za naszą i waszą wolność” (In the name of God, for our and your freedom). That banner is kept today in the Polish Army Museum in Warsaw, and I think it represents well the sense of patriotism that Poles have: a people with a Catholic faith as deeply rooted as their love of freedom. 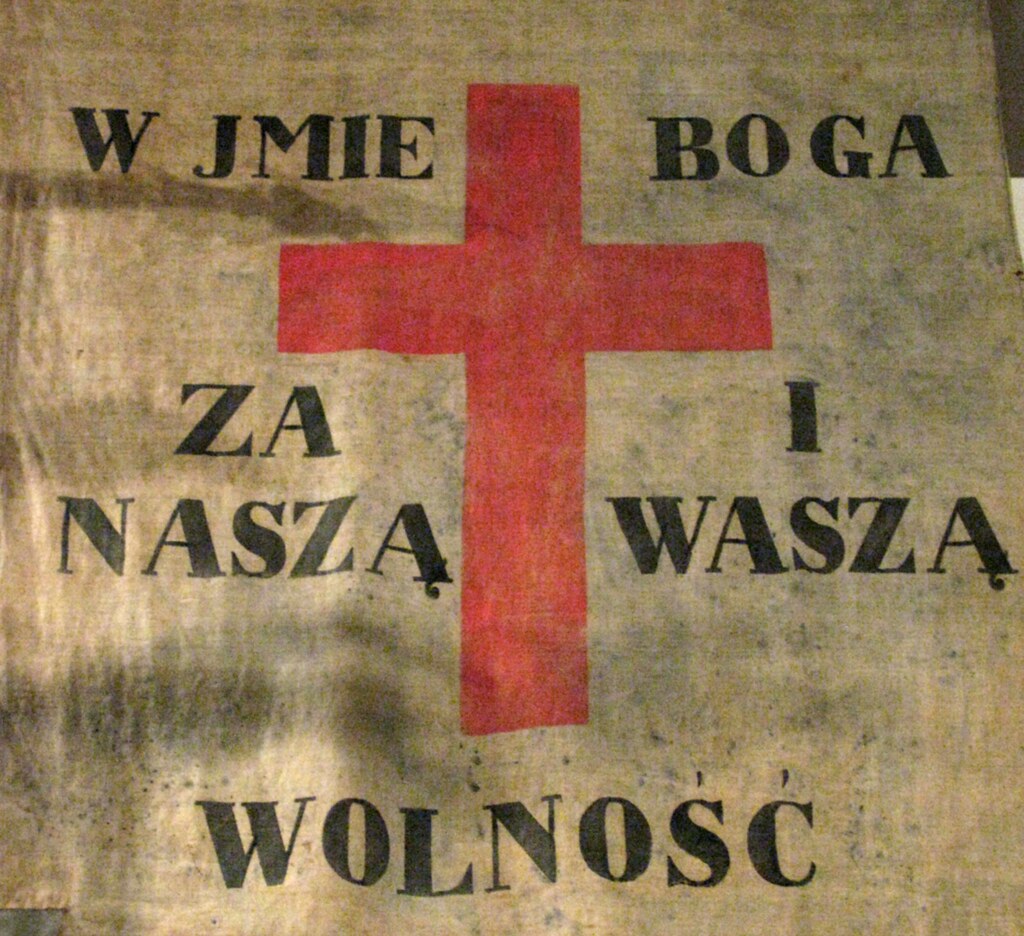 Flag used by the Poles in the 1830 Uprising against the Russian Empire, with the motto “W imię Boga za naszą i waszą wolność” : In the name of God, for our and your freedom (Photo: Maciej Szczepańczyk / Wikimedia).

Main photo: Niedziela.pl. Saint John Paul II kneeling before the Tomb of the Unknown Soldier in Warsaw on June 2, 1979, on his first trip to Poland as Pope.