The history of the Spanish woman murdered in the Twin Towers on September 11, 2001

On September 27, 1974, Silvia de San Pío was born in Queens, New York. She was the daughter of a Spanish family, so she had this nationality.

An artist and passionate about mathematics

Silvia was a beautiful brunette woman, with a deep look and great talent. In just three years she graduated in Mathematics from Hamilton College, a university school in Clinton, New York. She later traveled to Mexico to study ceramics. And it is that she, in addition to being a mathematician (and very fond of video games), was also an artist. After her studies in ceramics, she returned to New York, where he found work at Carr Futures Inc., a financial company that had its offices in the famous Twin Towers, specifically on the 92nd floor of the North Tower, overlooking the upper part of Manhattan. From those offices she would have spectacular views of the city and the Hudson River. 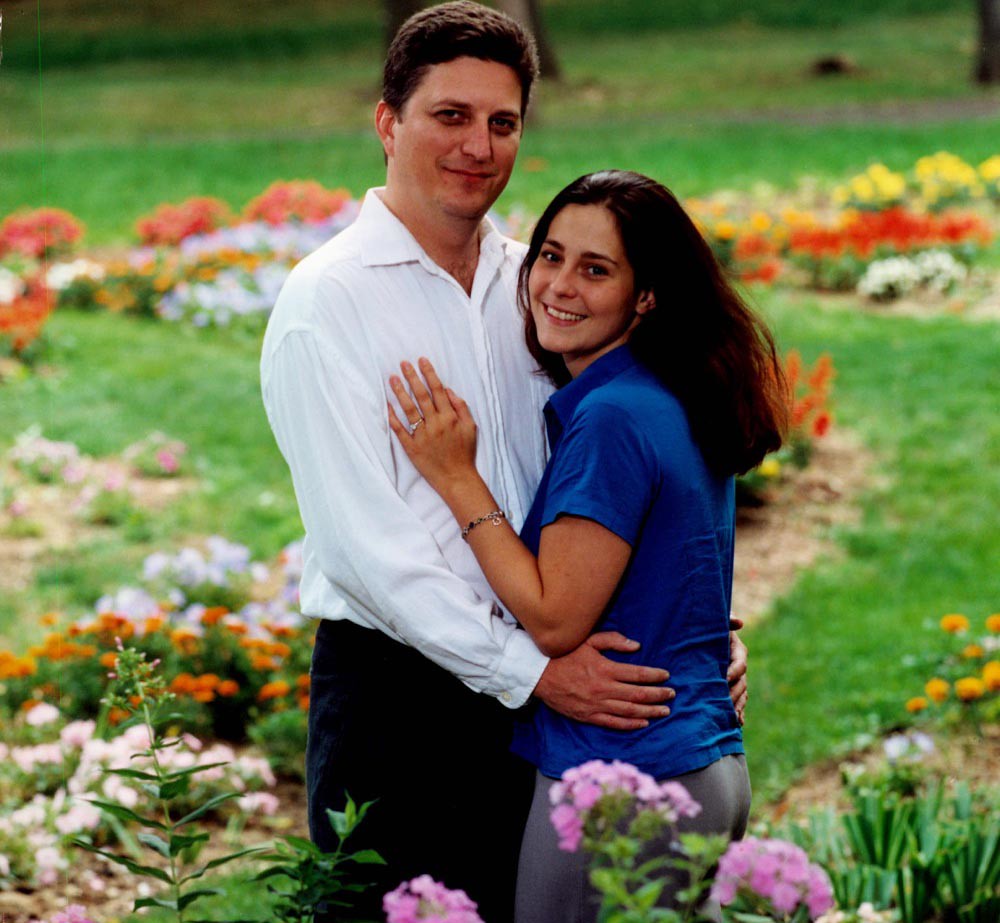 Silvia with John, whom she met at a Halloween costume party in 1999 in the same offices in the Twin Towers where they both died. Those who knew them affirm that they were very much in love. This photo was the one that was put at their funeral at Sacred Heart Church in Bayside in October 2001 (Photo: VoicesCenter.org).

A Halloween costume party in which a love story began

A Halloween costume party was held at the Carr Futures offices on October 31, 1996. Silvia still wouldn't know, but that party was going to change her life. There, among orange pumpkins, she met a handsome man with a reputation for romance, John Thomas Resta, who was then 35 years old and a Catholic like her. It was the beginning of a great love story. From then on, that party of monsters, witches and scares would be for them their particular Valentine's Day, being the anniversary of the day they met. During her courtship, Silvia transmitted John with her love of art, and he began to paint oil paintings. 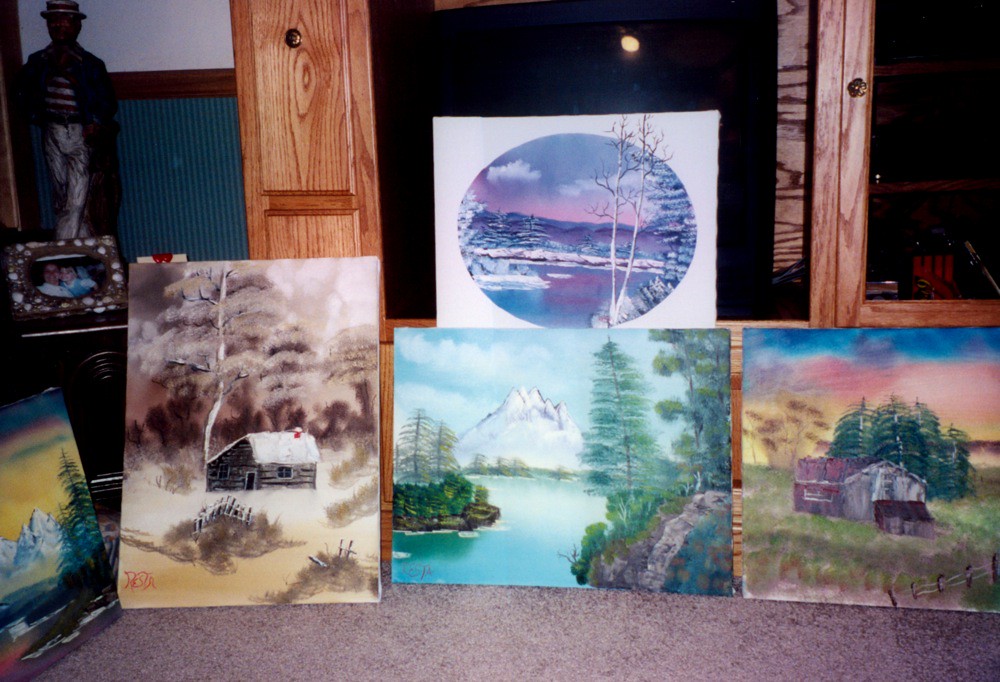 Silvia was a ceramic artist and encouraged John to paint. Here we see some oil paintings that he painted (Photo: VoicesCenter.org).

A romantic marriage request, a wedding and a new life on the way

John and Silvia traveled to Florida together several times, and in Miami she found a seafood restaurant that she liked very much. On October 31, 1999, on the third anniversary of the day they met, John took the day off. He had ordered seafood that came to New York from that Miami restaurant that Silvia liked so much. In addition, he rented a tux, a top hat and a cane, and spent the day adorning their apartment in Bayside, Queens, with candles, an elegant tablecloth and flowers. When Silvia returned to her apartment, he knelt before her and proposed to her. And she said yes. 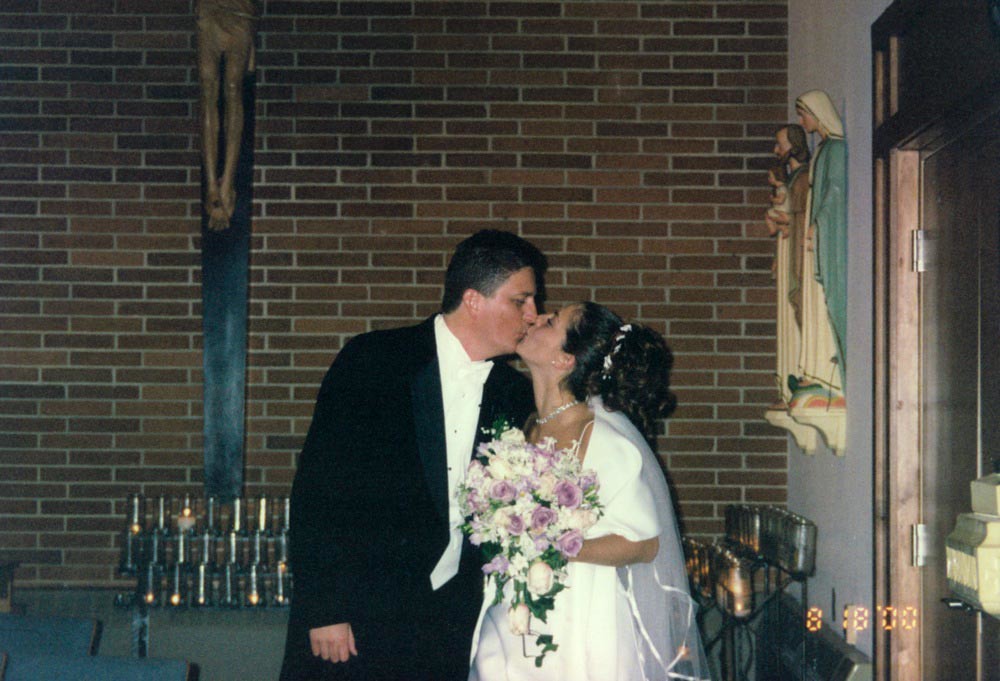 Silvia and John at their wedding, held at the Catholic school in Hazlet, New Jersey, where he studied. They were both Catholics (Photo: VoicesCenter.org).

They were married in August 2000. The ceremony was held at the Catholic school in Hazlet, New Jersey, where Jonh had studied, and the banquet was held at the Molly Pitcher Inn in Red Bank. John and Silvia were very fond of children. He had ten nephews, and they used to go to Hazlet for the weekend with them. Since Silvia loved video games, her kids had a blast with her. In February 2001, good news arrived: Silvia was pregnant. They thought that maybe her apartment in Queens would be too small for them, and they were looking for a house in New Jersey, close to John's family, but after much searching, without success, they finally gave up. Family was what mattered, home was the least of it. 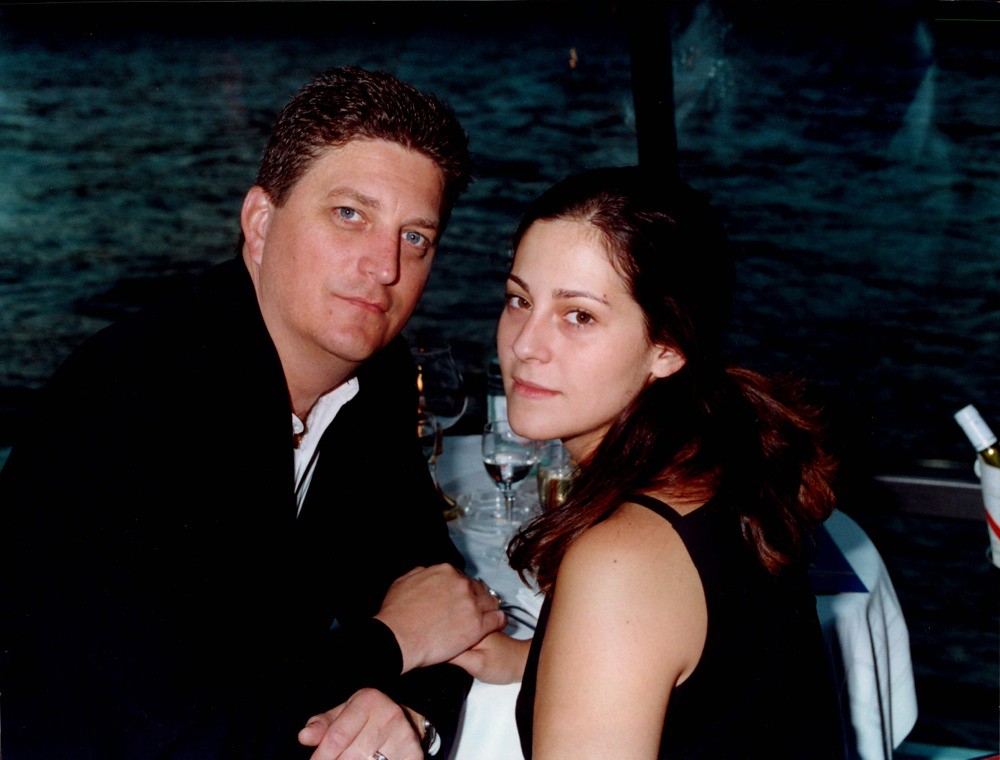 Silvia and John on their honeymoon (Photo: VoicesCenter.org).

Silvia's last trip to Spain in the summer of 2001

Since the arrival of the child - they already knew it was going to be a boy and had decided that it would be called Dylan - was not going to allow them to travel for some time, John and Silvia spent a few weeks in Spain visiting her family in the summer of 2001. It was a wonderful trip for them. But we had to go back, since on September 11, in the afternoon, she had an appointment with the doctor and Silvia was already close to taking her maternity leave. 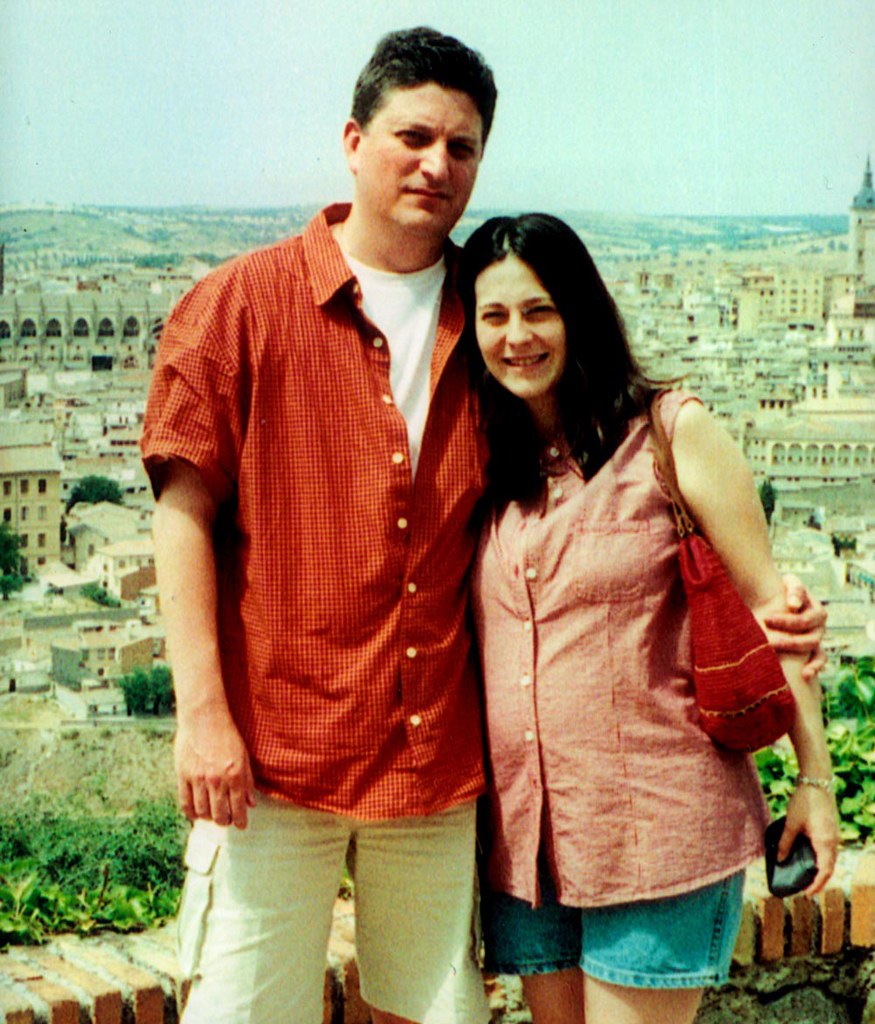 Silvia and John on their trip to Spain in the summer of 2001. It was the last time they saw her parents (Photo: VoicesCenter.org).

John and Silvia were in the North Tower on 9/11

And the day came that changed history. On the morning of September 11, John and Silvia went together to the Carr Futures offices in the North Tower, where they worked together. They were very much in love and excited for the upcoming birth of their little Dylan. Silvia was already seven and a half months pregnant. At that age, little Dylan would already measure about 13 inches and weigh about 750 grams. His lungs would already be able to breathe oxygen and he could also perceive odors. And he, too, would recognize his mother's voice. 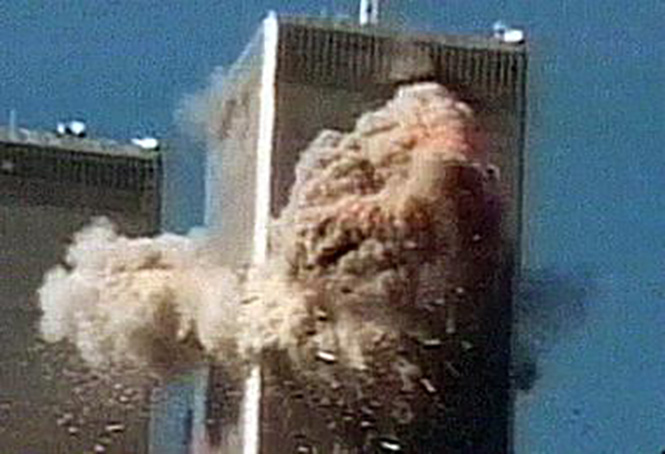 The impact of American Airlines Flight 11 from Boston on the north face of the North Tower, captured on video by Jules Naudet. The plane hit floors 93 to 99. John, Silvia, and their unborn child were on the 92nd floor (Image: Jules Naudet / Wikimedia).

That same morning, at 7:59 AM EDT, American Airlines Flight 11, a Boeing 767-223ER with registration N334AA, took off from runway 4R at Logan International Airport in Boston, carrying 92 people on board, including five terrorists who hijacked the plane 15 minutes after takeoff, directing it to New York. They crashed it into the North Tower of the Twin Towers at 8:46. It hit at 748 km/h on the north side of the Tower, between floors 93 and 99. John and Silvia were on 92. The brutal impact destroyed all floors and elevators of the building between floors 92 and 99, killing instantly the 92 occupants of the plane, and also killed 1,344 people who were in the North Tower, many instantly, and others trapped in the debris and flames.

José Luis de San Pío, Silvia's father, was in a small restaurant in Madrid when he was notified of what had happened. He knew his daughter was on the 92nd floor of the tower the plane had crashed into, and that the Carr Futures offices were facing north, just off the impact side. He hoped that she had not gone to work because of her pregnancy, but he was soon informed that she had. He assumed that her daughter "was gone", but without losing hope, she flew to New York, where she ultimately had to accept "the inevitable". After the attacks, José Luis became a Caritas volunteer: "I found the strength to get out of my anguish by deciding to collaborate for a more caring world in Cáritas Madrid," he said in a letter to the victims of the attacks of 11-M in 2004, in which added: "If unfortunately one of your loved ones has died in the attacks, and if like me you are a believer, remember that death does not have the last word." 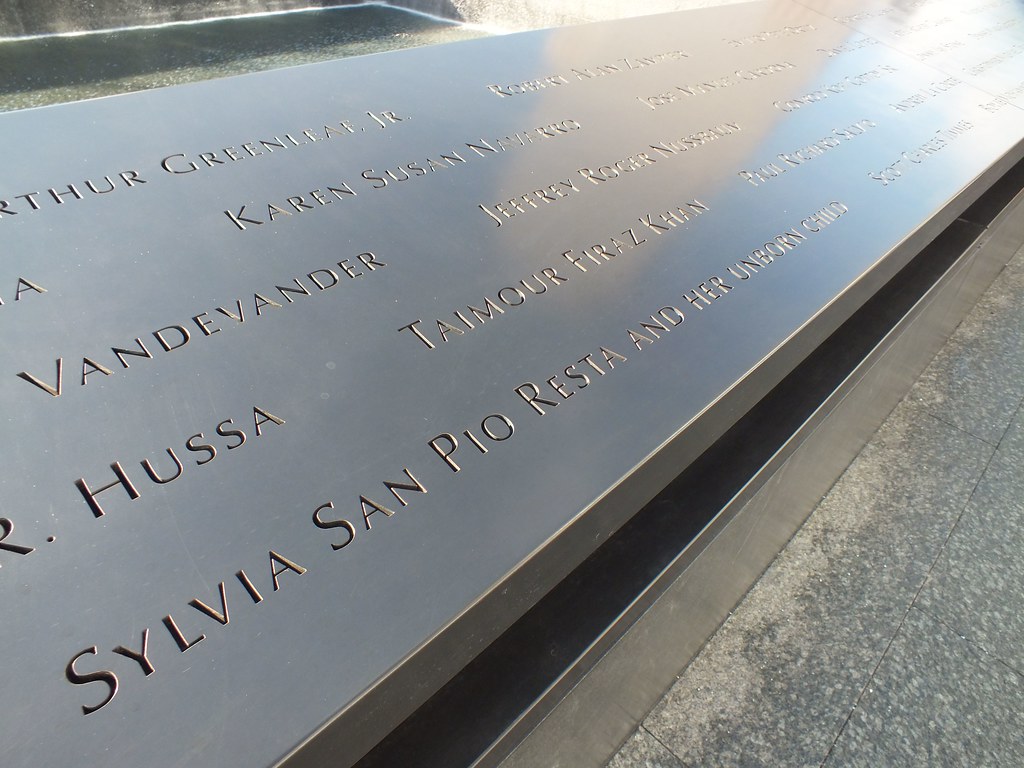 At the 9/11 Memorial, located on the site of the Twin Towers in New York, Silvia, John, and their son Dylan are listed on Panel N-62. She and her unborn child are mentioned like this: "Sylva San Pio Resta and her unborn child" (Photo: FindaGrave.com).

"The angels that God has chosen to be by His side"

John, Silvia and Dylan were three of the 2,996 people killed in the 9/11 attacks. She was the only victim of Spanish nationality and one of eleven pregnant women who are among the people killed in those attacks. Silvia was 26 years old at the time of her death, John 40, and Dylan seven and a half months. In October 2001 a funeral was held at Sacred Heart Church in Bayside. In it, Maritza, Silvia's older sister, said: "Silvia, John, her baby and all the people who died on September 11 are the angels that God has chosen to be by His side." 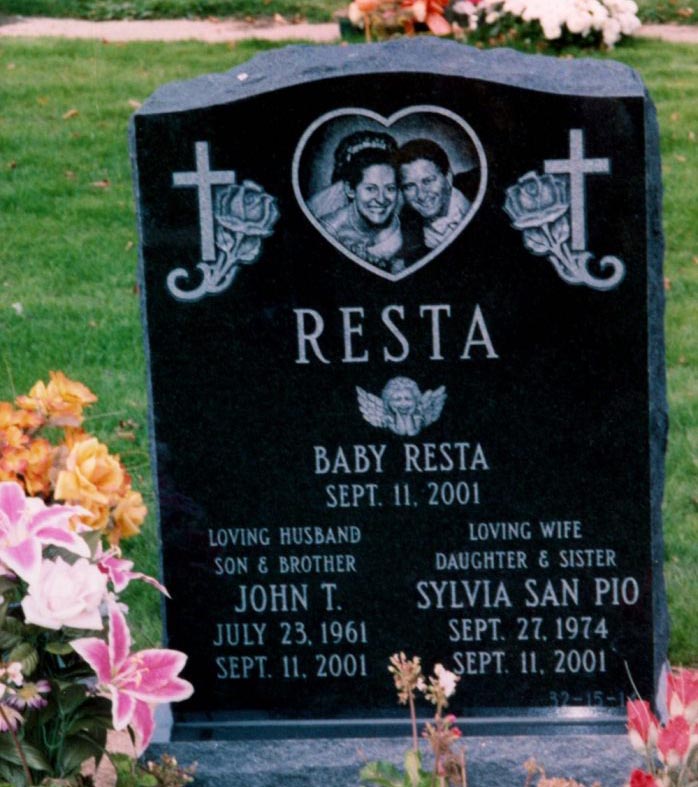 The grave in which the remains of John Thomas Resta rest. Also symbolically are his wife and his unborn child. The remains of her and her child are among those who could not be identified among the victims of 9/11 (Photo: VoicesCenter.org).

John's remains were identified in February 2002. Silvia and her child's remains have never been identified. Symbolically placed in the tomb with John's remains are the men of his wife and his son. Today, the 9/11 Memorial, located on the site of the Twin Towers, includes her name along with a mention of hers, her unborn child. Mention to all three is found on Panel N-62 of the monument (she appears as Sylvia San Pio Resta, with her name in English and her married surname). Her names also appear on Hazlet's 9/11 memorial, next to the New York Police Department crest.

I dedicate this entry as a tribute to Silvia, John, Dylan and all the victims of 9/11. Rest in peace.