The desire of a large part of our political class not to disturb those who come from outside is reaching purely absurd extremes.

A document drawn up by a Maltese socialist commissioner

Last Sunday, the Italian newspaper Il Giornale reported on an internal European Commission document entitled “European Commission Guidelines for Inclusive Communication”. In her introduction, the European Commissioner for Equality, Maltese socialist Helena Dalli, writes the following: “We must always offer inclusive communication, thus ensuring that everyone is appreciated and recognized in all our material, regardless of gender, race or ethnic origin, religion or creed, disability, age or sexual orientation.“

The document includes the usual censorship tips with the excuse of “inclusive language” relating to the grammatical gender of words. For example, it states: “Make sure that women and girls are not represented in the home or in passive roles while men are active and adventurous.”

It is forbidden to quote Christmas: instead he suggests saying “holidays”

But what has caused the most controversy is the part of the document related to “cultures, lifestyles or beliefs”. In it, it is required “to avoid considering that someone is a Christian”, so that “not everyone celebrates the Christmas holidays (…) we must be sensitive to the fact that people have different religious traditions“. With the excuse of respecting all religions, the document goes directly to trying to erase the Christian traditions that are part of European culture. For example, it demands avoiding the mention of Christmas, using the expression “the Christmas time can be stressful” as an example, proposing instead “the holidays can be stressful”.

The claim to eliminate Christianity goes further, since the document also calls for avoiding “Christian names”, pointing out as an example “Mary and Joseph are an international couple”, which according to the aforementioned guidelines should be replaced by a “Malika and Julio are an international couple” (Malika is an Arabic name, and Julio is of Roman origin). In other words, the European Commission does not use Christian names, but Arabs are.

The document even asks not to speak of “colonization of Mars”

Il Giornale points out that the document goes so far as to ridicule about the negative connotation of words like colonialism. Thus, it prohibits saying “colonization of Mars” or “human settlement on Mars”, and recommends instead “sending humans to Mars.” Surely this recommendation will aim to prevent Martians from feeling offended if they read texts from the European Commission. It would be hilarious if it weren’t for the fact that this bullshit is being financed with taxpayer money and is aimed at indoctrinating people into absolutely ridiculous ideological theses.

Christmas response on Twitter and criticism from the Vatican

The document has already had a response on social networks. Today the expressions “Feliz Navidad” (Merry Christmas) and #YoFelicitoLaNavidad (I congratulate Christmas) have been trending topics on Twitter Spain, with which many users have disagreed with the nonsense of the European Commission. On the other hand, the Secretary of State of the Holy See, Cardinal Pietro Parolin, has accused the European Commission of seeking “the annulment of our root, especially with regard to Christian holidays, also the Christian dimension of our Europe.” Parolin adds that “we know that Europe owes its existence and its identity to many contributions, but we certainly cannot forget that one of the main contributions, if not the main one, was Christianity itself.“

Given the controversy generated by that document, which has been echoed by the media in several countries, Helena Dalli published a tweet this afternoon attaching an official statement in which she affirmed that her purpose with that document was “to illustrate the diversity of European culture and showcase the inclusive nature of the European Commission towards all walks of life and beliefs of European citizens. However, the version of the guidelines published does not adequately serve this purpose. It is not a mature document and does not meet all Commission quality standards. The guidelines clearly need more work. I therefore withdraw the guidelines and will work further on this document.” 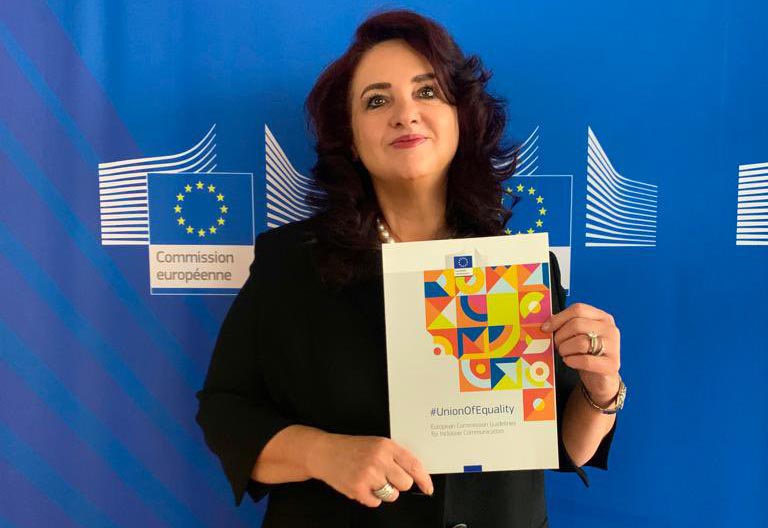 Dalli’s explanations are not very convincing, as she posed in this photo, posted on her Twitter account on October 26, with that document already printed in full color, stating: “I am proud to launch the @EU_Commission guidelines for inclusive communication.” It doesn’t seem like the way to present a simple internal draft, of course.