A silenced history: the traffic of European Christian slaves at the hands of Muslims

Slavery is a scourge that has its origin in the dawn of history. A scourge that was only fully abolished, by the way, in Western countries.

I have started this article by pointing out that slavery "is" a scourge. I said "is", and not "was", because even today hundreds of thousands of people in the world continue to be victims of the slave trade. Specifically, that institution continues to exist in African countries such as Mauritania Central African Republic, Burundi, Eritrea and South Sudan, and in Middle Eastern countries such as Iran, Pakistan and Afghanistan. Significantly, and this is a fact ignored by a large part of humanity, the country with the highest percentage of slaves is a communist dictatorship: North Korea.

Were there no white European slaves?

About slavery there are many erroneous topics. One of them was the one published in El País: "What would we think of the slave trade if whites had suffered it?", the socialist newspaper asked in a headline to announce a novel by Bernardine Evaristo based on the hypothesis that "the slaves would have been the Europeans". It seems that Mrs. Evaristo and El País have very little knowledge of history, because the reality is that white Europeans have been victims of the slave trade for centuries. 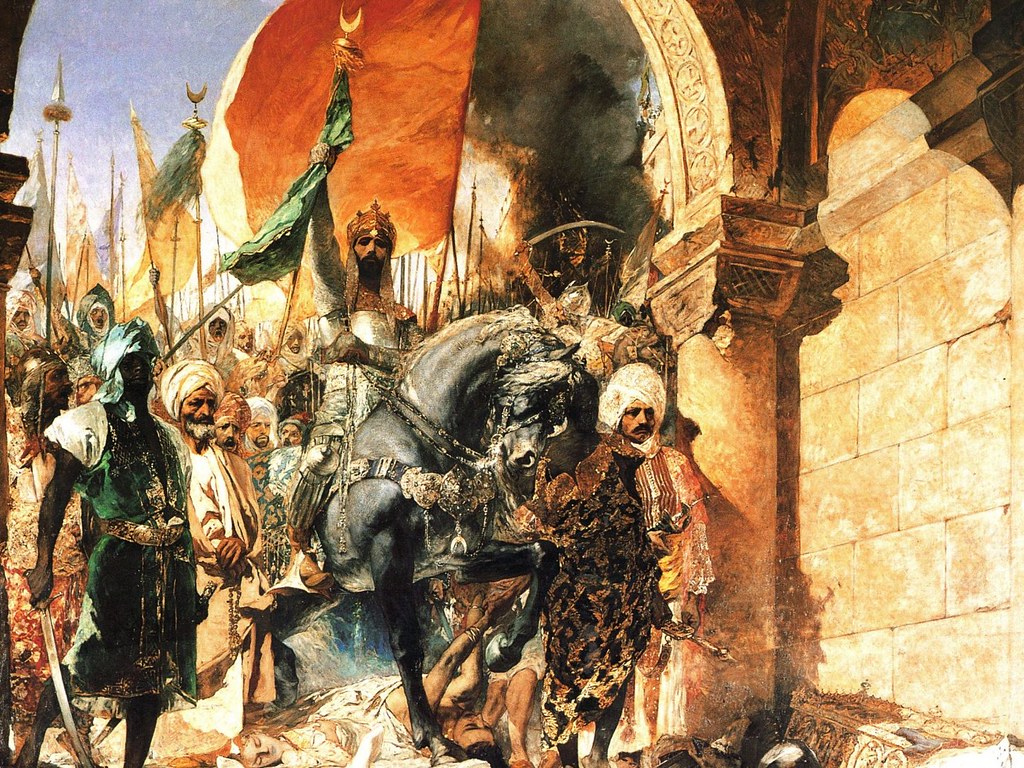 Mehmed II's entry into Constantinople. In the Islamic world, slavery was quite widespread during the Middle Ages because the sharia considered it acceptable against infidels (Source: Musée des Augustins / National Geographic).

This trade began at the very beginning of history. In ancient Greece and Rome, slavery was a widespread institution, and most slaves were as white as their masters. In the Middle Ages slavery tended to disappear in Christian Europe, or rather became serfdom, a less brutal institution. Where slavery did survive was in the Muslim world and in Byzantium, the Eastern Roman Empire.

With the Islamic invasions, this institution spread throughout the Balkans and the Iberian Peninsula during the Middle Ages. Muslims often took their slaves from the Christian territories they conquered. This was the case of tens of thousands of Armenian Christians in the city of Duin in the year 640 and the campaigns that the Muslim leader Almanzor undertook against the Spanish Christian kingdoms at the end of the 10th and beginning of the 11th centuries, as I have already indicated here. 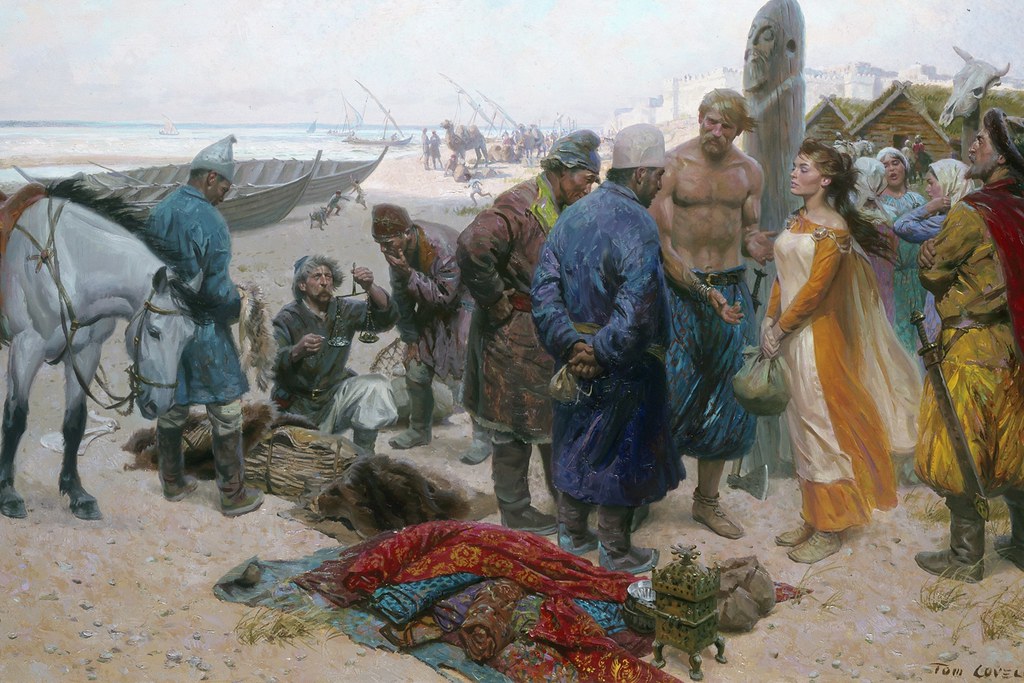 A young Slavic woman being sold into slavery by the Vikings to a Persian merchant (Image: Tom Lovell / National Geographic).

The Christian slave trade in Al-Andalus

The survival of slavery in the Islamic world is due, to a great extent, to the fact that the sharia or Islamic law "allowed the slavery of the infidels, and therefore, the slavery of Spanish Christians and also of black African animists, who constituted its main workforce", as Aurelia Martín Casares points out in "Esclavitud negroafricana". This traffic also occurred in Al-Andalus, the Islamic kingdoms of the Iberian Peninsula, as pointed out by Concepción Villanueva Morte in "El esclavismo islámico medieval. Una perspectiva andalusí (siglos VII-XIII)":

"The slave phenomenon has been intrinsically linked to the Muslim world since the Koranic religion began to spread, reaching great development as the doctrine expanded through conquest. This fact caused that, within the Islamic society, slavery was consolidated through its own characteristics, generating an important traffic of captives between different territories through various techniques of capturing people. One of them was Al-Andalus, which became a very notable source of supply of slaves and a point of reference where various routes converged."

Regarding the origin of the victims of the Muslim slave trade, the same author points out:

"The descriptions made by Ibn Hawkal in the 10th century allow us to establish that the Maghreb was a significant source of black slaves. The whites, according to him, would come mainly from the Iberian Peninsula. A large number of these were sent to the eastern Islamic world to satisfy the important demand for Christian, black and Slavic slaves. Most of them on their way to the East would pass through Kairouan, the richest city in the Maghreb in terms of slaves, ivory or gold dust." 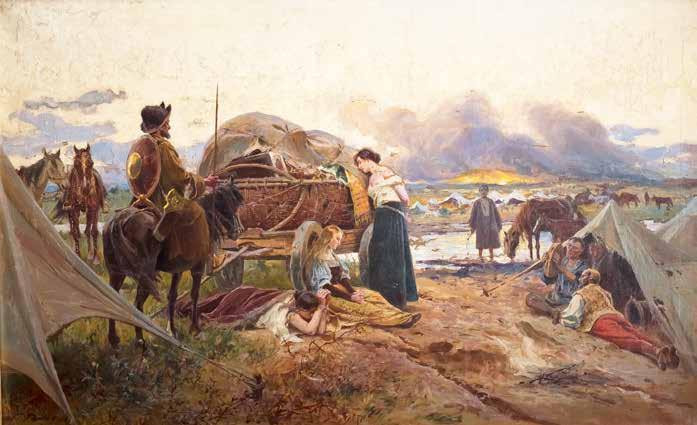 Young Slavs being taken away as slaves by Tatar Muslims (Image: Painting of the Polish painter Tadeusz Popiel).

Between 1.25 and 2 million white slaves between the 16th and 18th centuries

Villanueva also points out another of the large groups of white slaves who suffered from the human trade at the hands of the Muslim conquerors: "Among the white slaves, the most important in Muslim society were the Slavs (saqaliba) and the Turks, although with the first are more preferred." It should be noted that slavery in the Islamic world did not disappear with the Middle Ages, but continued in the following centuries until the decline of the Ottoman Empire.

In 2011, the BBC published a study by Robert Davis ("British Slaves on the Barbary Coast") in which he estimated that 1.25 million white Europeans were victims of the Muslim slave trade between 1530 and 1780. The author added: "White slaves in Barbary were generally from impoverished families, and had almost as little hope of buying back their freedom as the Africans taken to the Americas: most would end their days as slaves in North Africa, dying of starvation, disease, or maltreatment."

"Trade in slaves and captives was one of the most important (if not the mostimportant) sources of income of the Crimean Khanate in the sixteenth to eighteenth centuries. According to some estimates, in the ﬁrst half of the sev-enteenth century the number of the captives taken to the Crimea was around 150,000–200,000 persons. According to the most recent study by Darjusz Kołodziejczyk, based on the author’s comprehensive examination of varied source material, a number of captives transported by the Crimean Tatars from Poland-Lithuania and Russia (not including the Caucasus) approached 10,000 per annum, that is two million for the period between 1500 and 1700. Thus, the Black Sea slave trade was fully comparable in size with the Atlantic slave trade of the same period (ca. two million between 1451 and 1600), and declined only in the eighteenth century." 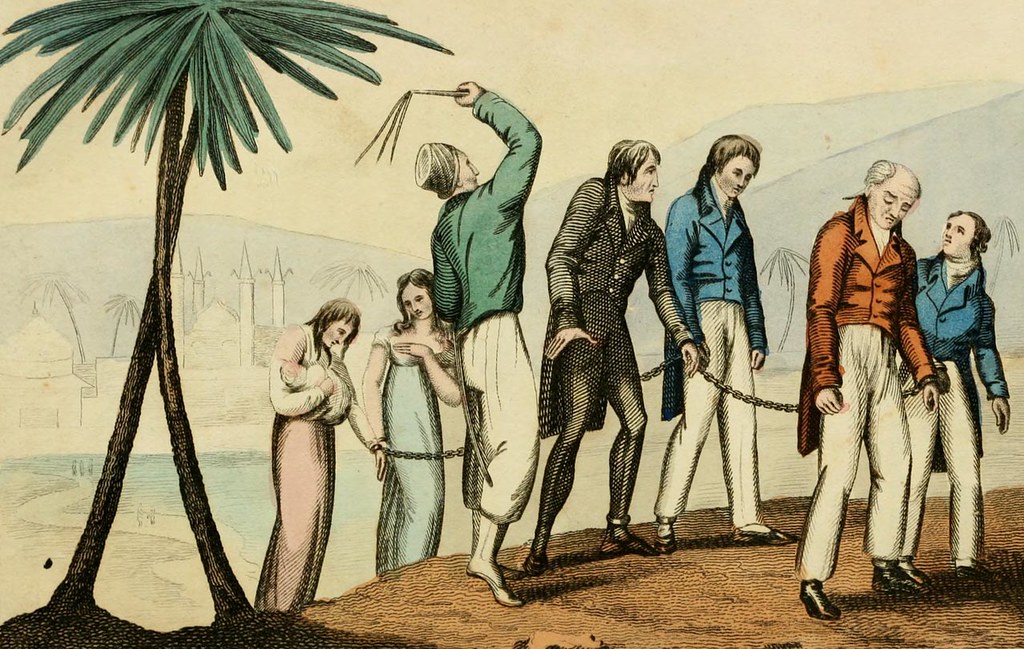 Kizilov adds: "travel accounts of Christian authors of that period are full of de-scriptions of sufferings of Christian slaves captured by the Crimean Tatars in the course of their raids to the adjacent to the Crimean Khanate states (mostly to Poland and Russia). Lithuanian ambassador to the Crimea, Michalon Lituanus (Mikhail Litvin), for example, described the sorrowful position of his fellow countrymen, whom he had seen in the slave-market in Caffa (East-ern Crimea)." Kizilov also cites the testimony of an Ottoman traveller, Evliya Çelebi, who described the Tatar slave market in Karasubazar thus: "A man who had not seen this market, had not seen anything in this world. A mother is severed from her son and daughter there, a son—from his father and brother, and they are sold amongst lamentations, cries of help, weeping and sorrow."

It is not a mere coincidence that this part of history is being silenced. The "woke" culture promoted by the political, media and academic left supports the racist idea of whites as oppressors of other races, referring to people of "oppressed" races as "racialized". These theories have powerfully fueled far-left movements like Black Lives Matter, which has expressed its Christianophobia along with its sympathy for Islam. That the Islamic world trafficked in European Christian slaves does not fit into that racist scheme of the world and of history, so it is simply omitted and we are tried to believe that the scourge of slavery was a perversity exclusive to Western whites and that they never suffered from it. A lie that contradicts historical facts.

Main image: HubPages. European women and children being taken as slaves by Muslims to Morocco.