One of its leaders, Shaun King, incites to tear down white Christian images

Until now the racist movement Black Lives Matter (BLM) has been characterized by its violence against public monuments of all kinds, but now it goes one step further.

Racism and christianophobia in BLM: he asks to tear down white Christian images

One of the leaders and promoters of that movement, the journalist and far-left activist Shaun King, displayed his attitude like a Taliban pointing out the next targets to the violent activists of that group. This Monday, in a fanatical message posted on Twitter, King wrote: "Yes, I think the statues of the white European they claim is Jesus should also come down. They are a form of white supremacy. Always have been. In the Bible, when the family of Jesus wanted to hide, and blend in, guess where they went? EGYPT! Not Denmark. Tear them down."

A few minutes later, King wrote yet status/1275113067555303424" rel="noopener" target="_blank">another message with the same Taliban attitude: "Yes. All murals and stained glass windows of white Jesus, and his European mother, and their white friends should also come down. They are a gross form white supremacy. Created as tools of oppression. Racist propaganda. They should all come down." A clear incitement to racist and anti-Christian violence, which is not, curiously, directed against the iconography that represents Christ and the Virgin with other races (it is customary to adapt these images to the cultural environment of each Christian community).

Flood of criticism against BLM racism and violence

Comments by Black Lives Matter leader have sparked strong rejection on Twitter. Last night, the first of the comments already had more than 16,000 responses, and the second more than 11,000. Many users have openly reproached him for his racism, violence and hatred of Christians. By now it has become clear that Shaun King hates white people. He is as racist as the racists he claims to oppose, and BLM increasingly resembles a black version of the Ku Klux Klan, as violent, racist, and hateful as that white supremacist group.

BLM activists attack the Black Madonna of Czestochowa in Breda

Significantly, a few hours before Shaun King published those comments, BLM activists attacked the image of the Virgin of Czestochowa in the Polish cemetery in Breda, Netherlands, where WWII soldiers who fought against Nazism are buried. To make matters worse, Czestochowa's is a black Virgin (both she and the Child Jesus are represented with dark skin). This representation of the Virgin Mary as a black woman is not strange in Europe, and in Spain it is very common: here we have black Virgins as famous as those of Atocha (patron saint of the Spanish monarchy), La Cabeza, Guadalupe, Montserrat, La Candelaria, Torreciudad ... 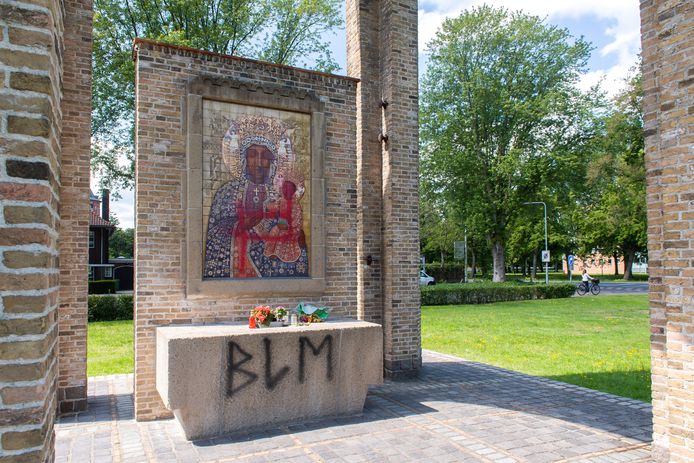 The image of the Black Madonna of Czestochowa in the Polish cemetery of Breda in the Netherlands, vandalized by activists from Black Lives Matter (Photo: Pix4Profs/René Schotanus).

King's nods to the far-left, Islam and the Church of Satan

King's extremist and anti-Christian allegation is nothing strange coming from him. Black Lives Matter leader is a supporter of the left-wing wing of the Democratic Party: "I love Bernie Sanders," King said April 14 in an article published in The North Star, the left-wing newspaper he runs. Likewise, in 2017 openly showed his support for Antifa's violent far-leftists, and also wrote: "I support the communists & socialists standing against Trump". Perhaps this statement can explain things like BLM's recent attack on the monument to the victims of communism in Washington DC.

On the other hand, and in contrast to his christianophobic message on Monday, in 2017 Shaun King also made an argument in defense of Islam: "We must never hate Islam, or Muslims," he said. That same year, King lashed out at "American Christianity" citing a message from the Church of Satan. This gives an idea of the kind of people who pull the strings of the racist BLM movement.