Robert S. Johnson's prowess combined with the toughness of his P-47 fighter

The history of aviation is full of events so amazing that they seem to be the result of a miracle. One of them was experienced by the pilot Robert Samuel Johnson.

A bond with aviation that began in childhood

Robert was born in 1920 in Lawton, a small town in Oklahoma, in the United States. His interest in aviation began when he was only 8 years old. His father, a mechanic, took him to see an air show by the Three Musketeers, an aerobatic patrol formed the year before by the US Army Air Corps. When he was 12 years old he was finally able to fly aboard a Ford trimotor, during a brief flight from his city. It was the beginning of a life related to aviation that would lead him to star in a purely miraculous flight. 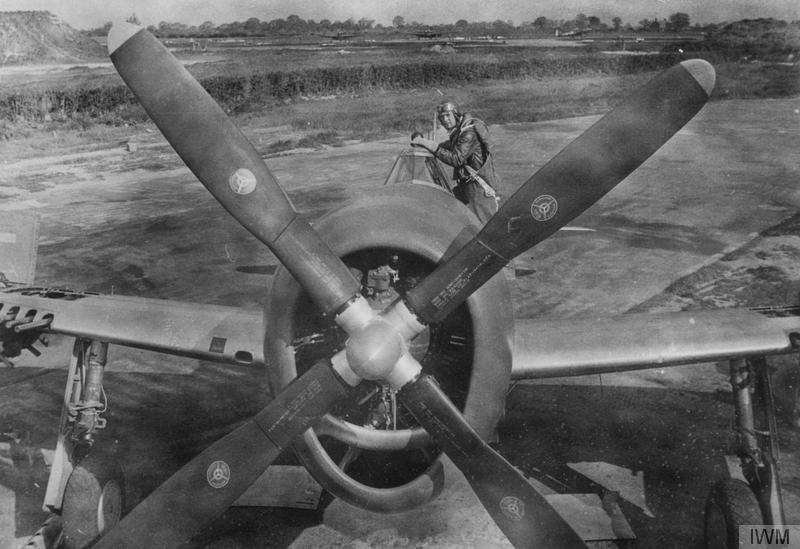 His enlistment before the Japanese attack on Pearl Harbor

In the summer of 1941, at the age of 21, Robert enlisted in the US Army Air Corps, before the country had entered World War II. He began his preflight training in November, and was in that stage of his training as a cadet when the Japanese attack on Pearl Harbor occurred on December 7, 1941. Robert began his flight training in February 1942, graduating with the rank second lieutenant on July 9 of that year. Ten days later he was assigned to the 56th Fighter Group, equipped with Republic P-47B Thunderbolt fighters, an aircraft known for its resistance to damage in dogfights. Robert was going to get a chance to taste it.

On June 26, 1943, Robert was flying at the tail of a formation of 48 P-47C fighters that had taken off from RAF Manston in eastern England to provide escort for a formation of B-47C bombers. 17 returning from a mission against the Villacoublay aerodrome, outside Paris. 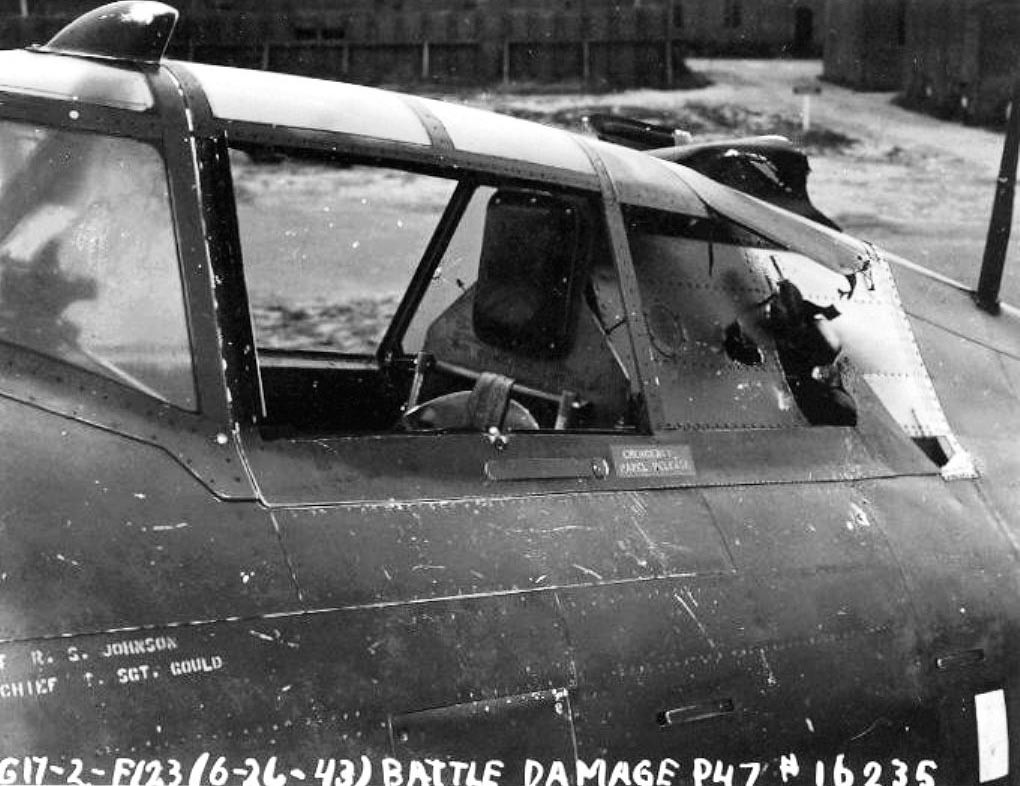 While flying near Forges-les-Eaux, the P-47Cs were suddenly attacked by 16 German Focke-Wulf Fw 190 fighters. Robert’s plane was one of the first to be hit by enemy 20mm cannon fire. His cockpit was damaged and the plane’s hydraulic system was damaged, which began to fall. A machine gun bullet hit Robert on the tip of the nose and he too sustained shrapnel injuries. The cockpit caught fire for a moment. Badly injured and nearly blinded by the hydraulic fluid, Robert tried to jump out, but the canopy wouldn’t open. Despite everything, Robert managed to stabilize the plane and direct it towards the English Channel.

However, Robert’s problems did not end there. A Fw 190 came up behind him and began firing at him, causing further damage to the already wrecked P-47C. The American pilot managed to maneuver to avoid further damage, and even managed to get the German pilot to overshoot him, returning fire despite the fact that his cockpit windows were nearly blinded by hydraulic fluid. In a strange turn of events, the German pilot maneuvered to stand next to him and, looking at him, gave him a military salute. Robert thought his rival was sparing his life, but it wasn’t. 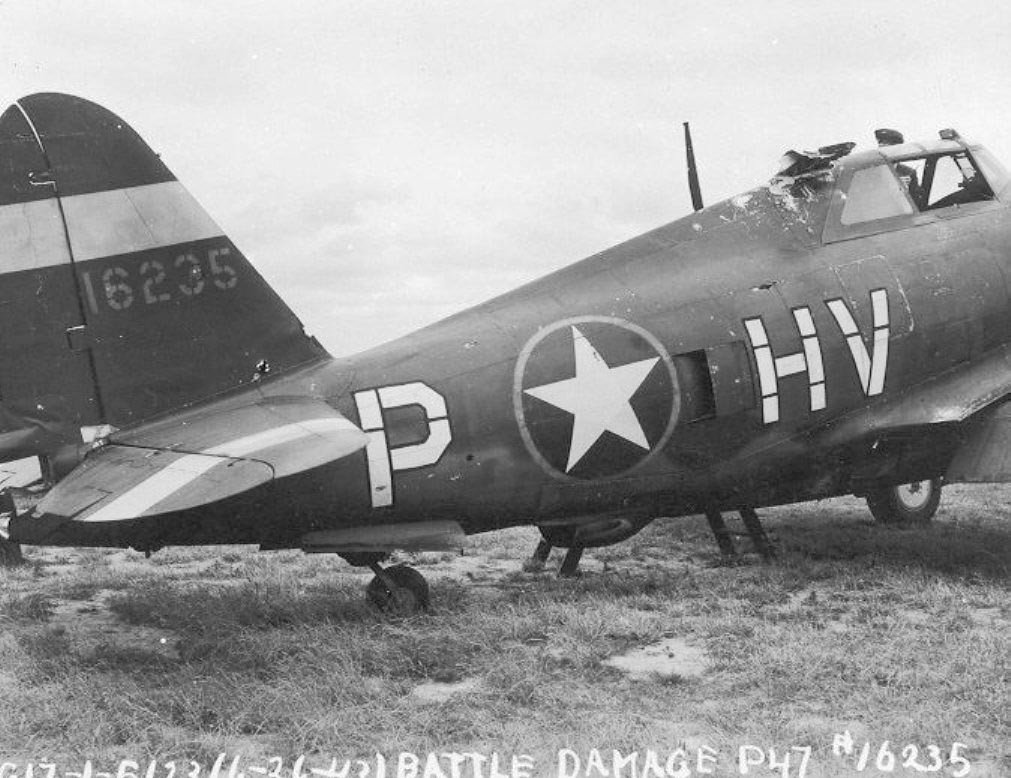 After the gentlemanly gesture, the German pilot returned to position himself in the tail of the P-47C and resumed his fire on it. Once again, the robust American plane resisted, aided by the skill of its pilot. Once again, the German pilot returned to stand next to Robert’s plane to dedicate a new salute to him. This time the gesture should no longer have made the protagonist of our story so funny. As had happened before, the German aviator again positioned himself behind the American fighter and continued to fire on the P-47C, this time with his 7.92mm machine guns, after running out of 20mm ammunition.

Finally, the German pilot ran out of ammunition. He approached Robert’s plane again, gave him a rocking salute, and left. The American pilot made it back and landed his plane at RAF Manston. He was taken to the hospital with burns and shrapnel wounds. After that mission, Robert was curious and approached his plane to take stock of the damage. He counted 200 bullet holes without even bothering to circle the plane, and didn’t keep counting. That mission demonstrated the extent to which the P-47 was capable of withstanding enemy fire. 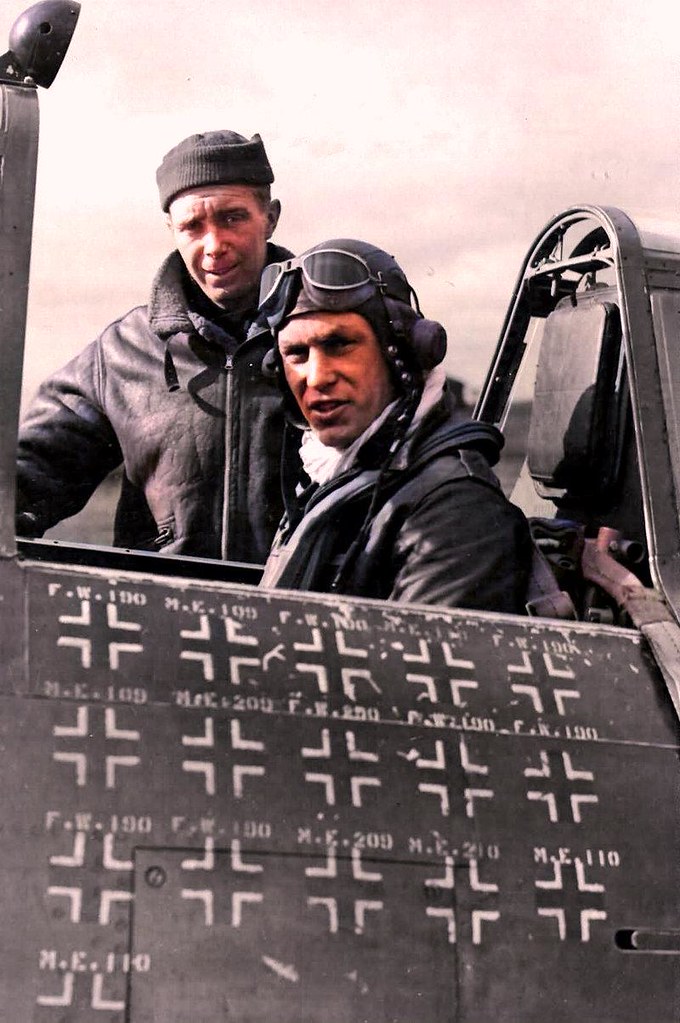 Robert Samuel Johnson aboard his P-47, with 16 confirmed victories already covering one side of the plane (Photo: American Air Museum in Britain).

He finished the war becoming an ace with 27 victories

Incredibly, despite the damage sustained, 5 days later Robert was flying again. During the war he achieved 27 victories, he was the first American pilot in Europe to surpass the 26 victories achieved by American ace Eddie Rickenbacker in World War I. He was released from service in 1944 after completing 91 missions with the 56th Fighter Group, and was discharged in 1946 with the rank of Lieutenant Colonel. He passed away in Tulsa, Oklahoma, on December 27, 1998, at the age of 78. Even today it is unknown with certainty who that German pilot was. Some affirm that it could be the ace Egon Mayer, shot down on March 2, 1944, at the age of 26, when he had already accumulated 102 victories, including the shooting down of 12 P-47s.

Today, the always interesting YouTube channel Yarnhub has published a wonderful video about that miraculous flight by Robert Samuel Johnson: