MH17: the shooting down of an airliner by pro-Russians in Ukraine and Russia's lies

The shootdown killed all 298 occupants of the Malaysia Airlines plane

The 298 occupants of the plane, a Boeing 777-200ER, died in the downing: its 15 crew members and 283 passengers, mostly Dutch (193), Malaysians (43) and Australians (27). Among the deceased were also Indonesians (12), British (10), Belgians (4), Germans (4), Filipinos (3), a Canadian and a New Zealander. Eight of the passengers were under the age of 18. The shooting down occurred in an area occupied by pro-Russian Donbass separatists, who had launched an armed uprising with the support of Russia in April 2014. The separatist forces had already shot down Ukrainian aircraft before the downing of MH17, but at a lower height. to which commercial flights continued to pass through that area.

Because most of the deceased were Dutch, the Ukrainian authorities delegated the investigation of what happened to the Onderzoeksraad voor Veiligheid (OVV, Dutch Security Board). The OVV led an international commission of inquiry in which investigators from seven countries participated: the Netherlands, Ukraine, Malaysia, the United States, the United Kingdom, Australia and Russia. The definitive report on the accident was published on October 13, 2015 (see PDF), concluding that the plane was hit by a Russian 9M38-type missile, equipped with a 9N314M warhead, launched by a Buk surface-to-air missile system. You can see here the official video of the OVV (in English) explaining the conclusions of its investigation:

In September 2016, Wilbert Paulissen, chief investigator of the Dutch National Police, noted that this Buk system "came from the territory of the Russian Federation, and after the launch it was returned again to the territory of the Russian Federation." The missile would have been launched from the town of Pervomaysk, in eastern Ukraine, occupied at the time by pro-Russian separatists. The international criminal investigation concluded that the missile launcher had been supplied by the Russian Army's 53rd Anti-Aircraft Missile Brigade, based in Kursk. On May 25, 2018, Australia and the Netherlands blamed Russia for the shooting down of the MH17, noting that Russia deployed the Buk missile launcher used in that downing to Ukraine.

On the same day of the downing, the Security Service of Ukraine (SBU) intercepted a communication in Russian between a command of the pro-Russian militia "Bes" and the colonel of the Russian intelligence service GRU: "We have just shot down a plane," the command of the pro-Russian militia said. You can listen here that conversation and its transcription in English, as well as communications between the pro-Russian separatists acknowledging that they had not found weapons among the wreckage of the plane and that it was a civil aircraft:

That same day, the Russian medium Life News published that the pro-Russian militias had reported the shooting down of a Ukrainian Antonov An-26: "It was hit by a rocket, there was an explosion and the plane fell to the ground, leaving behind black smoke. Debris rained from the sky."

As if there weren't already enough evidence, photos coming to the light showing the pro-Russian separatists posing smiling and even making signs of victory next to the wreckage of the plane after its shooting down. In the images, the logos of Malaysia Airlines are clearly distinguished in the remains of the plane: 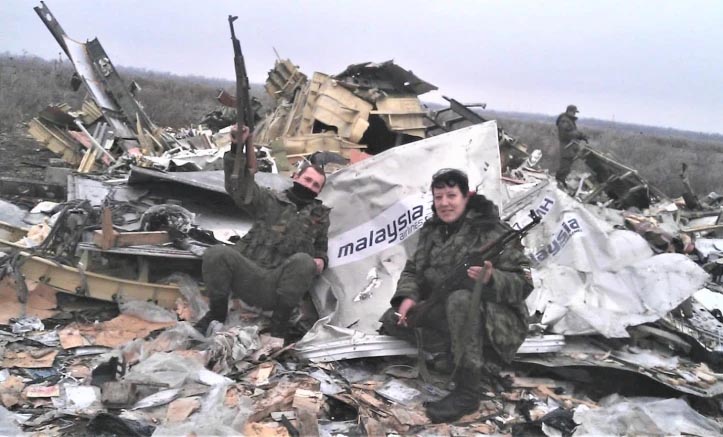 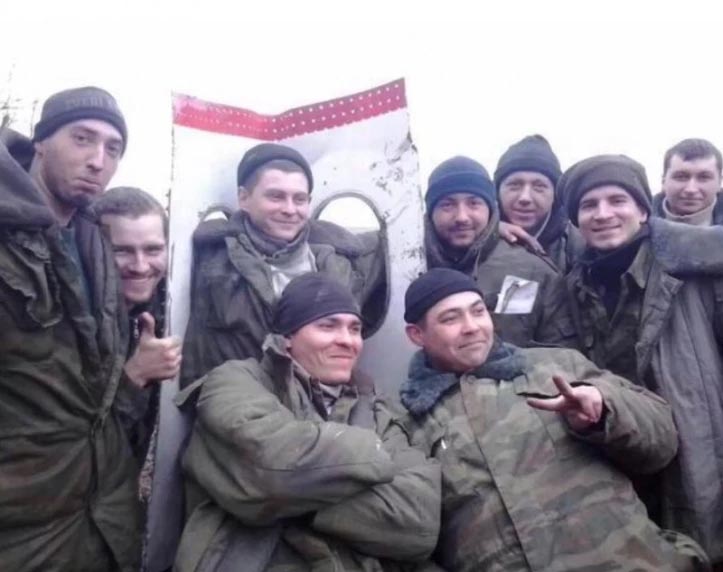 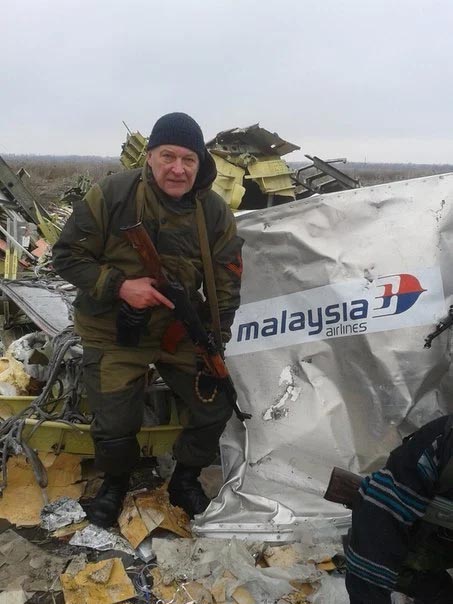 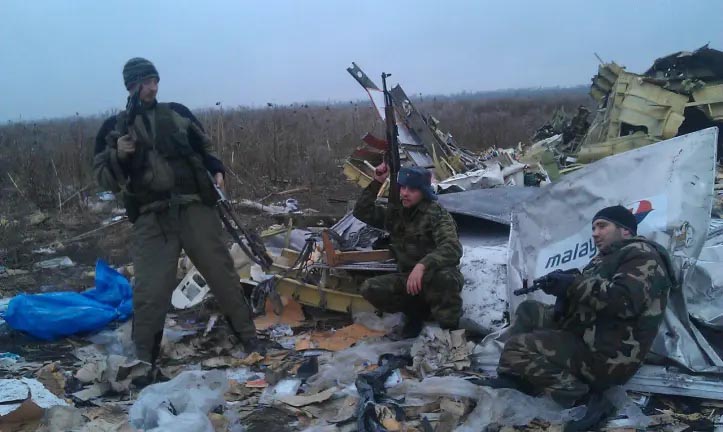 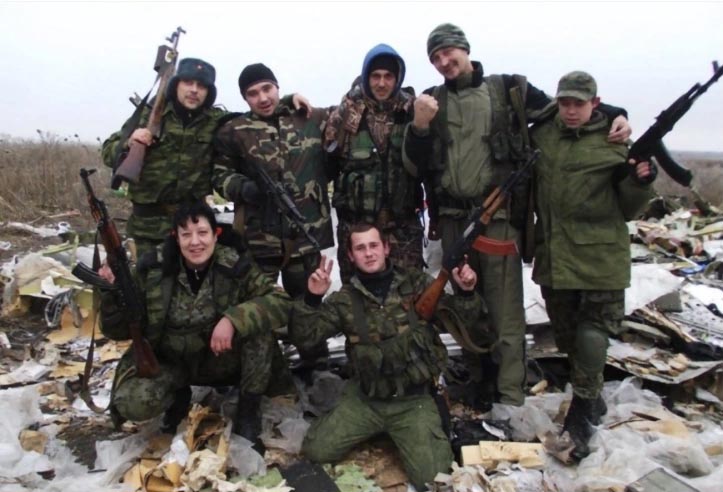 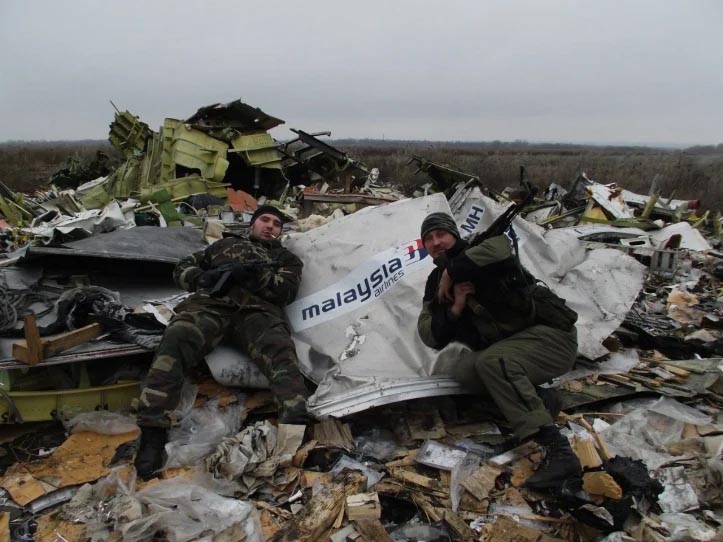 When it was discovered that pro-Russian separatists had shot down a commercial flight and killed 298 civilians, Russia launched its propaganda machine to cover up what happened, trying to blame the Ukrainian government for the shooting down. In the official Russian channel RT there were resignations because of the lies that they were forced to tell. After celebrating what they believed was the downing of a Ukrainian An-26 plane, the Russian media changed their story and blamed a Ukrainian Sukhoi Su-25 for the shooting down. The fact is that the Su-25 is an attack aircraft, not a fighter, and the investigation report ruled out that the shooting down had been done with air-to-air missiles.

When it became clear that the plane had been shot down by a Russian Buk missile, Russia changed its version and said that the missile was Ukrainian. The Dutch Prosecutor's Office asked Russia for the alleged evidence in which the Kremlin supported that statement. Russia has never provided such evidence, nor has it previously provided the alleged evidence it used to claim that MH17 had been shot down by a Ukrainian plane. To this day, Russia continues to deny the evidence, just as it systematically denies all evidence of Russian attacks on civilian targets in Ukraine, and continues to falsely blame Ukrainian forces for the downing of MH17, circulating all kinds of hoaxes and conspiracy theories through their propaganda networks in order to deny the evidence.