According to Russia, the murderer was with her 12-year-old daughter and her cat

The death of the Russian journalist and activist Daria Dugina received a new explanation yesterday from one of the suspects of having murdered her.

As we saw on Sunday, August 21, some analysts pointed to the FSB (the heir to the KGB) as the possible perpetrator of the murder of the nationalist activist, daughter of the influential ideologue Aleksandr Dugin. The next day, an unknown "partisan" group claimed responsibility for the crime, a version that has not convinced the same analysts either, but that same day caused considerable outrage in Russia, including threats against former Russian deputy Ilya Ponomarev, who made that claim known.

The problem that this murder has caused the FSB

But even if the Russian intelligence service was not involved in the crime and if it were true that this "partisan" group committed the crime, what happened would leave the FSB in a very bad place, as Nicolás de Pedro, an expert in geopolitics of the Institute for Statecraft, pointed out yesterday, speaking of the version spread by Ponomarev: "if this particular hypothesis were true, its political, and even psychological, impact would be much greater" in the Russian Federation. "And, precisely for this reason, it is why it may be easier for the Kremlin to construct some ad hoc narrative to divert attention from what happened, if it was an intelligence failure and security in the Moscow region."

Nicolás de Pedro's statement, published in a Spanish media outlet in the early hours of August 22, has turned out to be prophetic. Hours later the FSB published a curious story attributing Dugina's murder to "Ukrainian special services". The FSB version has been widely spread by pro-Russian propagandists in the West (as they usually do with any story that published by the Kremlin media, as absurd as it may be), but there is not a single serious analyst who has given it credibility. We are going to see below the details that do not add up in that story, starting from this news from the Russian state agency Tass and this one from the same source. 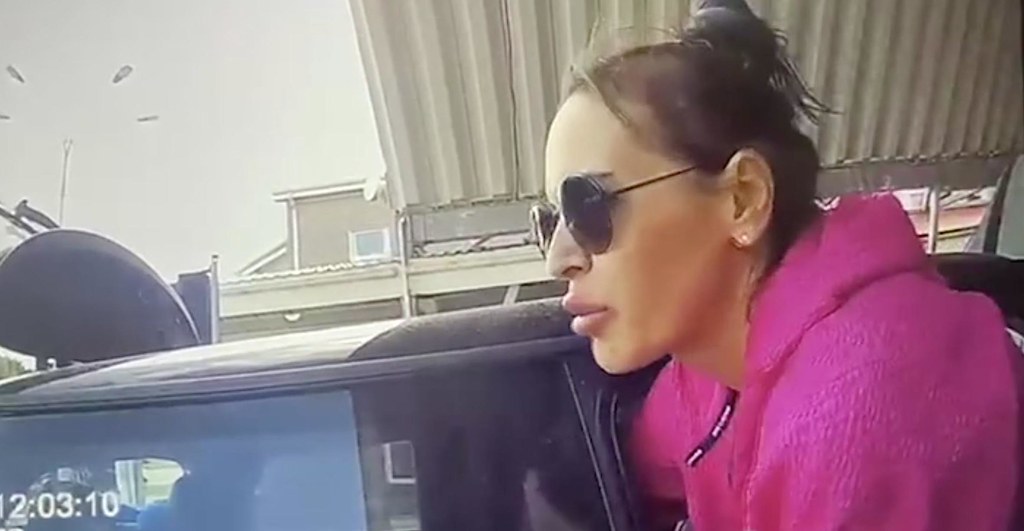 A killer with too much botox on her lips

The FSB affirms that the author of the crime would have been a Ukrainian citizen, Natalya Pavlovna Vovk, born in 1979. Another Russian state agency, RIA Novosti, has published several images of her. One of the most striking details is that her lips are excessively enlarged, probably due to a bad injection of botox or hyaluronic acid. It is not a physical characteristic that you would expect from an agent of an intelligence service, because that would make her too recognizable.

Tass also points out that Vovk would have arrived in Russia on July 23, 2022 Along with his daughter Shaban Sofia Mikhailovna, born in 2010. Furthermore, the agency quotes the following statement from the FSB: "On the day of the murder, Vovk and Shaban were at the Tradition music and literature festival, where Dugina was present." In other words, we are dealing with a supposed intelligence agent who takes her 12-year-old daughter on a mission. 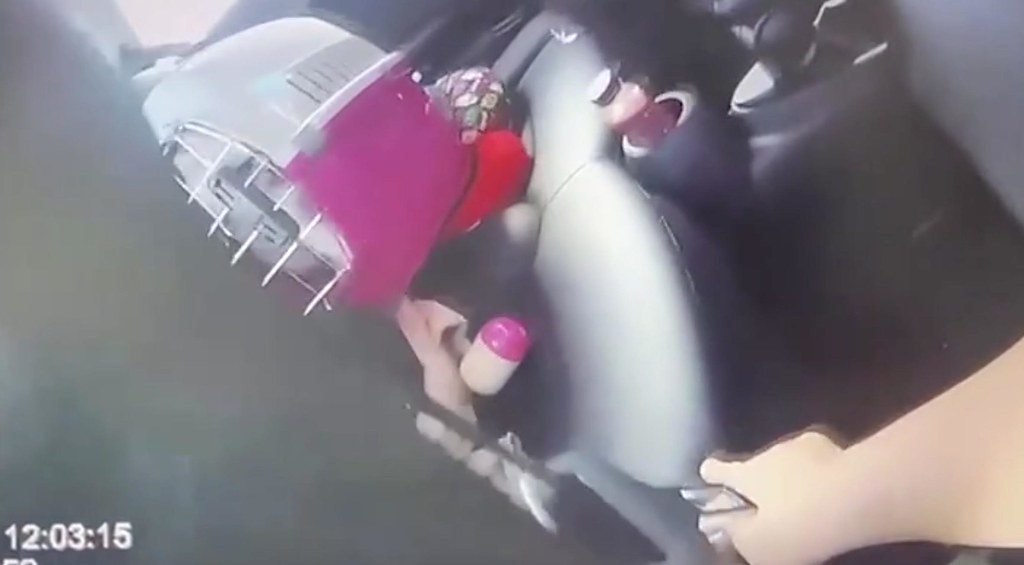 In addition, both were accompanied by their cat

To make matters worse, yesterday afternoon RIA Novosti published an FSB video about the suspects. As Anton Shvets pointed out, at 1:53 you can see that in the back seat of the car carried a cat in a cage. In other words, the alleged intelligence agent would not only have taken her 12-year-old daughter on the mission, but also her cat. The word "surreal" falls short.

A month-long surveillance operation for an irrelevant target

According to Tass, the FSB also notes that "in order to organize Dugina's murder and obtain information about her lifestyle, Vovk and her daughter rented an apartment in Moscow in the house where the deceased lived. The criminals used a Mini Cooper car to monitor the journalist". Note that Tass calls the mother and her 12-year-old daughter "criminals".

In other words, a terrorist command made up of a 12-year-old girl would have spent almost a month studying a target as insignificant for Ukraine as Daria Dugina, and also to go more unnoticed, a terrorist mother and his little terrorist daughter would have moved around in a car as recognizable as a Mini Cooper. The fact is that, as published by a Russian media on Sunday, the car in which Dugina died belonged to her father and the target of the crime would be him: why watch for a month to his daughter?

Tass adds: "At the same time, when entering Russia, Donetsk People's Republic numbers were used: Е982ХН DPR, in Moscow: Kazakh numbers 172AJD02, and when leaving: Ukrainian AH7771IP." The history of license plates is also very curious. In a country heavily controlled by the FSB, someone would have managed to sneak a car into Russia carrying several false license plates through a war zone (since the car would have entered Russia through the Donbas). If this were true, heads should roll in the FSB.

A crime for hire that in 24 hours becomes the crime of a mother, her daughter and her cat

Tass points out that 400 grams of TNT would have been used in the crime. It also affirms that the explosive would have been placed in the lower part of the vehicle that Dugina was driving, on the driver's side, and that "the bomb was planted in the festival parking lot and detonated remotely". This data was already published on Sunday, and the Investigative Committee of the Russian Federation interpreted it as an indication of a crime for hire. Now one wonders if the FSB really believes that the paid professional who would have been in charge of committing the crime was a mother accompanied by her 12-year-old daughter and her cat.

Russia now says Dugin was not the target, but the explosive was in his car

Late yesterday afternoon, Tass published a news story quoting an anonymous source from the "forces order of the Russian Federation" (in this case he is not talking about the FSB) which ensures the following: "Those who prepared the murder of Daria Dugina were only interested in the daily routine and the habits of the journalist herself. When the explosive device was detonated, those who detonated the car from a distance knew for sure that Dugina was driving alone. The father was not the target of the assassins". However, this version of events does not square with the fact that an explosive was placed under a car that belonged to Aleksandr Dugin, and not to his daughter, and in which Dugin made the decision of not travel at the last minute, as indicated on Sunday.

On the other hand, Russian media have published an alleged credit card Vovk's ID that would credit her as a member of the Azov Regiment, a unit of the Ukrainian National Guard that obsesses over Russian propaganda. This piece of information is very curious: Did her alleged murderer forget her identification card? Where did they get that card? The response was not long in coming: Lauri Linnamäe has put that card through forensic testing and result be false.

Putin took two days to offer his condolences to the family

As if curious facts weren't missing, Vladimir Putin yesterday sent his condolences to the family of the murdered woman, hours after the FSB published its version of events. It is striking that the Russian president waited almost two days to send that message. Was he waiting, perhaps, for the FSB to publish his incredible story so that the Russian president would be cleared of all suspicion about the authorship of the crime?

The sudden speed of the FSB, whose incompetence has been staggering

Just as striking as the fact that in two days the FSB has "resolved" this case so quickly, considering that so far the FSB has shown notable incompetence in resolving the acts of sabotage that are being carried out held in Russia. That two alleged terrorists (one of them only 12 years old) have sneaked in and that 48 hours later they even have the woman's identity card is something that cannot be sustained.

The Ukrainian government crosses out the FSB's version of propaganda: "lives in a fictitious world"

Mykhailo Podolyak, adviser to the Head of the Office of the President of Ukraine, commented yesterday on the FSB version by pointing out that Russian propaganda "lives in a fictitious world", noting especially the fact that the intelligence service Russian has pointed out a 12-year-old girl as an alleged accomplice to the crime. Podolyak pointed out the possibility that the crime was due to a conflict between the Russian special services: "they started an intraspecies fight".

"Every comment and action only confirms FSB was behind it"

Among analysts, the FSB version is subject to all kinds of criticism. Olga Lautman, an expert on Russian organized crime and its relations with the country's government, noted: "FSB who is most likely responsible for the bombing of Dugin’s daughter has ‘solved’ the case. They blame Ukrainian special services for this explosion. Who could have seen this coming besides everyone? The next propaganda will be that US and UK directed this." Last night, after spreading details of the FSB version, Lautman pointed: "Every comment and action only confirms FSB was behind it and as in most cases screwed up and are spinning fairy tales."

A story that would expose the incompetence of the FSB

In turn, the analyst Mark Galeotti has pointed out: "we have the claim that a Ukrainian with a 12-year-old in tow carried out the attack, trailing Dugina in a mini with multiple number plates, then insouciantly headed for the Estonian border and passed through without any hitch. Who knows, maybe it's true, but it also would suggest a pretty major failure on the past of the MVD/FSB. I think this is a major Kremlin blind spot, to fail to appreciate how its evolving narrative is actually painting it as incompetent (as it often is, it has to be said).".

What does seem evident is that Russia, despite having offered a preposterous story about the authorship of the crime, is willing to use that version to victimize in the international sphere. Without going any further, yesterday Russia threatened Estonia with "tough action" for not handing over to the mother and her daughter (with no formal extradition request yet not even contacts for report it). Also, in a brazen attempt to use this crime for propaganda purposes, Russia has announced that it will bring the facts to the UN Security Council, and that while its troops continue to murder unarmed civilians in Ukraine. It is the height of cynicism.

Main photo: Shutterstock. Agents of the FSB, one of Russia's intelligence services.