The recently deceased British Queen Elizabeth II met many other historical figures of the 20th century in person. Among them, the great writer J.R.R. Tolkien.

As TheOneRing.net has recalled, Elizabeth II was an 11-year-old girl when "The Hobbit" (1937) was published. (Tolkien's first work), and after becoming Queen in 1952 came the publication of "The Lord of the Rings" between 1954 and 1955. Tolkien's work was widely distributed, being translated into at least 38 different languages (and later made into a film), and the Queen had a great gesture of appreciation for it for the Catholic writer.

On January 1, 1972, when Tolkien was already 80 years old, Elizabeth II appointed him Commander of the Order of the British Empire, a British decoration established in 1917 and whose purpose is to recognize special contributions to the field of arts, sciences and charity. In the case of Tolkien, the Queen justified his award by his services to English literature. It must be remembered that Tolkien was not only a great man of letters, but also one of the best philologists in the world. twentieth century. The award ceremony took place at Buckingham Palace on March 28 of that year. 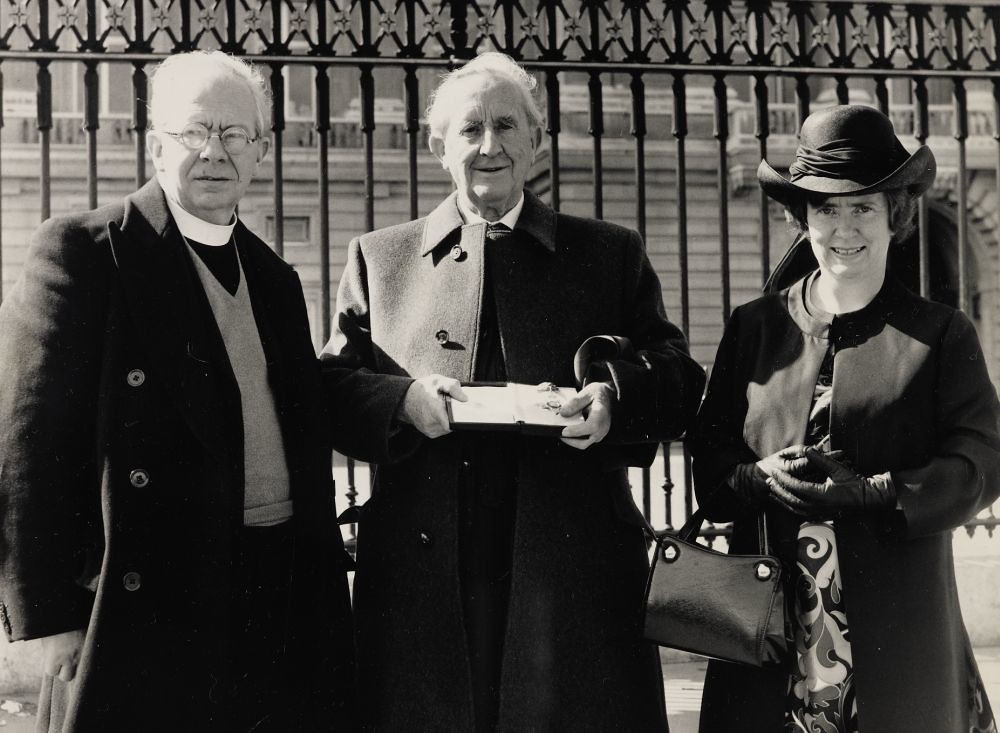 J.R.R. Tolkien, accompanied by his son John and his daughter Priscilla, displaying his Commander of the Order of the British Empire (Photo: Tolkien State).

After the award ceremony, Tolkien posed in front of Buckingham Palace showing the distinction, visibly happy and accompanied by his son John (a Catholic priest) and his daughter Priscilla. In a letter to his publisher Rayner Unwin (number 334 in the book that compiles his correspondence), written two days later, Tolkien confessed: "I was very deeply moved by my brief meeting with the Queen, & our few words together. Quite unlike anything that I had expected."That was a very special moment for the writer, whose work -full of great kings and queens- makes clear his great respect for the Monarchy.

Tolkien died on September 2, 1973, almost a year and a half after receiving that award. He was buried in the Catholic section of Wolvercote Cemetery, Oxford, next to his wife Edith, who died on November 29, 1971.