KoLiber: In This Way Life, Family, Tradition And Free Market Are Defended in Poland

Poland is an amazing country from which we can extract lots of teachings. A country ideologically immunized against totalitarisms, after suffering Nazism and Communism oppression.

Poland: a long tradition of resistance against tyranny

After the end of Polish-Lithuanian Commonwealth –one of the main XVI-XVII centuries European powers-, Poland disappeared from political map. However, as its national anthem says, “Poland has not yet disappeared meanwhile we live”. The Poles leaded two important uprisings against Russia in 1830 and 1863 that finished with a Polish defeat. At the beginning of First World War, its historical territory was divided among three empires: Germany, Russia and Austria-Hungary. Once the war came to an end (Russia decided to stay away from the battle after a shameful peace signed by bolchevists), Poland recovered its independence in 1918. Two years later, the Poles stopped Soviet Invasion over Europe with their surprising victory in the Battle of Warsaw. Despite of that, in 1939, Hitler and Stalin divided up the country, which led Poles to start a new fight for their freedom.

Poland had the biggest anti-Nazi resistance movement of Second World War, whose members were mainly conservatives and Catholics. That resistance movement, which was split into tens by Nazis after 1944 Warsaw Uprising, was trounced by Soviets after the battle. Many of its members were jailed, deported to USSR or executed by firearm, such as happened to Witold Pilecki, Zygmunt Szendzielarz “Łupaszka” and another Polish combatants against Nazism. In spite of that, after the expelling of Nazis, Polish resistance continued fighting against the new Soviet occupants until 1963. Many Europeans ignore that information completely. 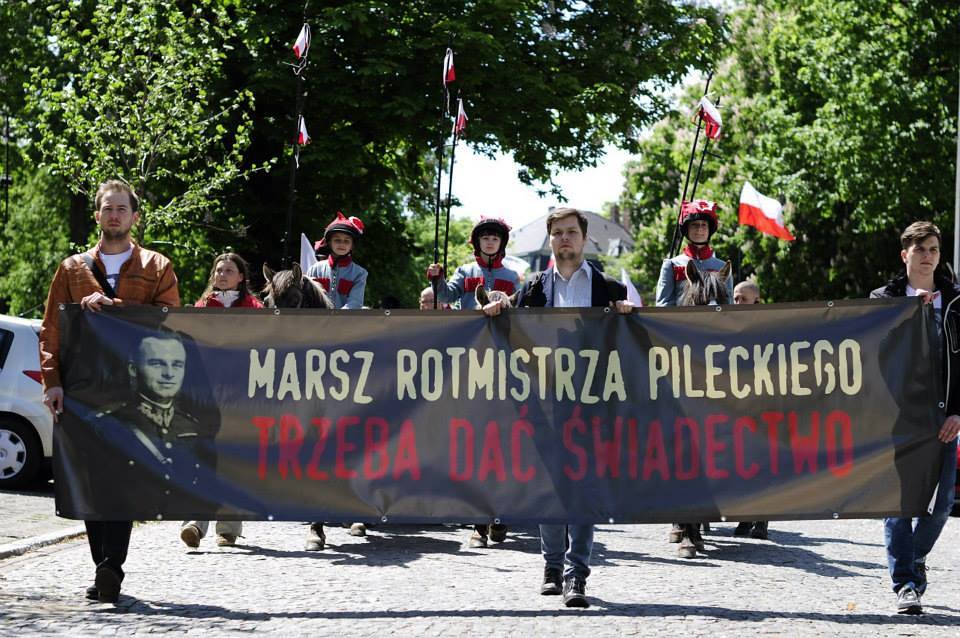 Members of KoLiber Association carrying a banner to honor Witold Pilecki, an official of Polish resistance what let himself be captured to be confined in Auschwitz to inform allies about crimes that were committed there.

Among the fruits of that Polish tradition of fighting for freedom is the Stowarzyszenie KoLiber (Hummingbird Association, in Polish language), an organization about which a long time ago my friend Ángel Manuel García Carmona talked to me, that could serve as a reference for Spanish libertarian-conservatives. It was founded on 26th of January, 1999, and officially registered on 17th of April, 2000, and their first members were young students, entrepeneurs and Warsowian politicians of the Unii Polityki Realnej (they became independent from that party on November 1999). Since then, their activity reflects and absolute lack of complex when it comes to defend their statements: after 11-S terrorist attack, they mobilized in support of the USA against terrorism. Since 2001, every first Sunday of June, they organize, in Poland, the International day of Freedom and Prosperity, a day to celebrate the capitalism and in particular businessmen and entrepeneurs, which are considered “great benefactors of humanity”. They also participate in events and mobilizations to remember Polish heroes in their fight for freedom, such as, for example, those in memory of Witold Pilecki, the Warsaw Uprising and the National Day of “Cursed Soldiers” (Polish soldiers who fought in secrecy against communism during the post-War). They’ve convened protests against tax raises, in defense of free media, and they have carried out campaigns for the elimination of public monuments and streets and squares names that are dedicated to communism.

In defense of the right to life without constraints nor complex

In 2012, they started up the initiative KoLiber dla Życia (KoLiber for life), which purpose is the defense of the right of life since conception. In the bench of this campaign, they are supporting the initiative Stop Aborcji (Stop Abortion, in Polish), that pretends to eradicate it from the country. In their website, they reject also the excuses that are used to admit abortion in case of rape: “The life does not stop being a life simply owing to a conception as a result of rapist activities. Unborn children do not deserve to be condemned to the highest possible penalties”.

In 2015, they developed a program that was accepted by the current Prime Minister of Poland, Andrzej Duda, who won presidential elections that year. The program includes demands in support of the increasing of quantities free of taxes, the school voucher, the reduction of labor costs, changes in the historical policy and opening the debate to reform the system of pensions.

Nowadays, the association has one of the greatest and most active networks of Polish political activism, with 25 delegations around the country. Many of its members participate in politics and they have even been elected by voters for elected positions with different parties. In their website, they defend the ideological legacy of Burke, Tocqueville, Acton, Hayek, Friedman, … such as inspirers of that which they call konserwatywny liberalism (conservative libertarianism). Regarding Spain, since past year, they maintain relationships of cooperation with one of the most active organizations of classical liberal field of Spain, El Club de los Viernes. It seems they feel a special affection for our country: on 12th of October, 2016, they wished us a happy Hispanity Day in its Facebook page, considering the Discovery of America as “one of the most important events of the history of humanity”, and talking plainly about Spanish “glorious history”. 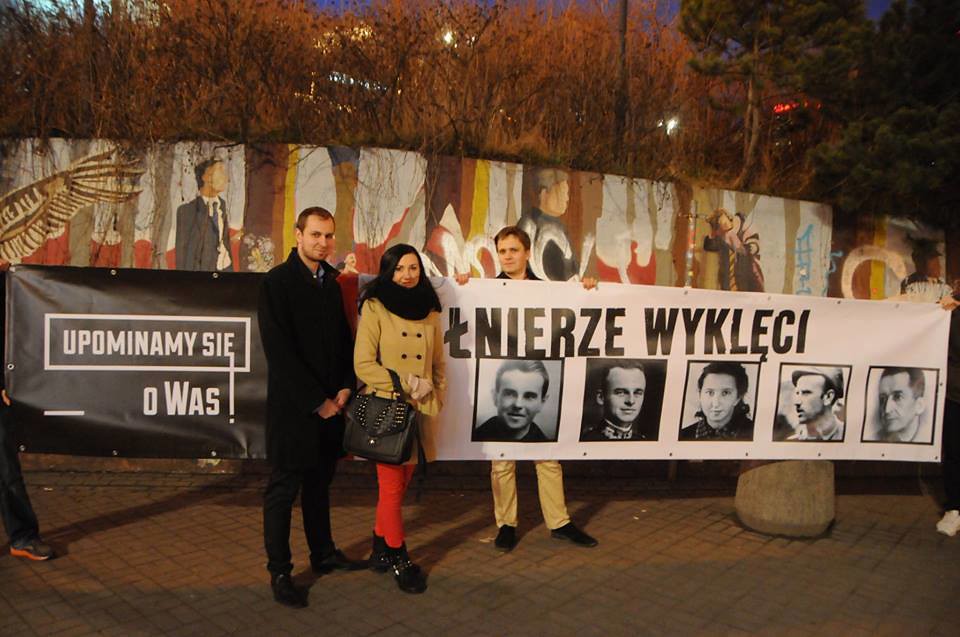 Members of KoLiber Association with a banner to remember “Cursed Soldiers” the members of Polish resistance against Nazism that at the end of II World War continued their fight against Soviets.

The ideology of the Stowarzyszenie KoLiber

For its interest I translate their ideology below (I have indicated in bold the parts that I found most interesting):

KoLiber Association is an association of young Poles who believe in conservative and free market values. We hold that living according to these values would tend to create both the growth of economic welfare and reinforcement of social bonds and reconstruction of the moral base of our civilization.

In our actions we will aim at:

I. Realisation of the idea of free society.

We do think that the basic subject is an individual and not a society. That is why the greatest value for us is the well-being of every single person who is the foundation of all social and political institutions. In our minds freedom is more important than equality; all efforts to eliminate natural inequalities, arising from human nature, are impossible to succeed. That is why we will excoriate any political system enforcing social reforms and forcing a redistribution of national product. We believe however that public relations have to be driven by ethics, and freedom should exist alongside responsibility for own fate.

We have no doubt that a return to capitalism in its pure form is the only way to gain fixed prosperity and a quick economic growth. However the necessary condition is complete neutrality of the state and also abolition of lawful obstacles that close access to the market, hampering employers and enterprises.

We believe that thousand years of history of Polish Nation together with its strong, independence traditions are enough for Polish State to exist. That is why we recognize the right of Polish Nation to self-determination. In particular we will oppose an enforcement of foreign, economic, domestic and military policy to Polish State by external entities.

We hold that the only roles of the state should be: providing external and internal security for its citizens, legislation and execution of law. We will aim for establishment of lawful governing granting that everyone is equally treated by the law. We think that in our civilization law should be established on Christian ethics and tradition of Roman law; it should guarantee absolute protection of private property, personal inviolability, liberty to take action and also freedom of speech.

We strongly feel that much of the power, which belongs to central state machinery at the moment, should be held by the people. That is why it is important to support all the bottom-up initiatives of social life. Only well functioning local governments will be able to face up to new tasks.

We believe that common tradition is the factor joining society and creating the feeling of national unity. That is why we will cultivate family, national and civilized traditions. We see the necessity to sustain continuation with the past. We will resist any aspect of revolutionism inhering in political systems. Particularly we reject the legacy of communism; we also definitely oppose absolute power of majority.

Family is fundamental social institution – man matures emotionally and develops his ethical rules there. We believe then that symptoms of family breakdown are incredibly dangerous for the shape of the whole society. That is why we will safeguard traditional family model. The right to raise children according to parents’ views and beliefs is uncontested.