Thanks to a Polish tweeter, @Emi_gratka01, yesterday I found out about an interesting article about Spanish history in the Polish newspaper Rzeczpospolita. An article in which I am mentioned.

The author, Małgorzata Wołczyk, cites Spain as an “admired” country, and criticizes the false stereotypes that what she calls “Czarna legenda” (Black Legend) have extended. In the article, well documented and very brave, she speaks about the “virus of the hispanophobia” and makes a parallel between anti-Spanish propaganda and anti-Polish propaganda. Of this last one I have spoken some time in Counting Stars; for example, of some ugly custom of citing as “Polish extermination camps” what were in fact extermination camps installed by the Germans in Poland. In March I criticized an example of that anti-Polish propaganda published by the newspaper El País. As I told you here in May, that information triggered a lawsuit against the newspaper in Poland.

I told you then about a Polish media – the conservative-liberal digital Do Rzeczy – citing the reply I sent to El País. It was my first appearance in a Polish media. And I say first because, as I have already pointed out at the beginning, in the article published this Sunday by Rzeczpospolita, they alluded me again, in relation to the reply I gave to El País in March. Rzeczpospolita is one of the most popular newspapers in Poland, it has print and digital editions, and its editorial line is conservative-liberal (like the one in this blog). The Polish tweeter @emi_gratka01 has published the capture of the text of the printed edition of the newspaper in which I appear quoted: 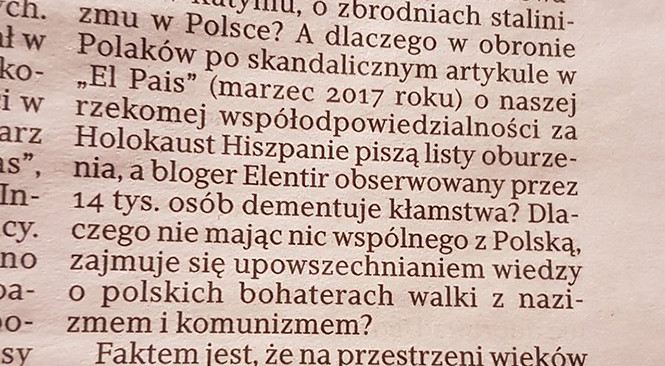 I especially liked the reflection that Małgorzata Wołczyk makes at the end of his article, a reflection that explains the common denominator that we Poles and Spaniards have in history: “The fact is that over the centuries, the Spanish black legend has despised Spain not only for its imperial policies that harmed the interests of other states, but mainly for its ardent Catholic attitude. We Poles, who do not like false generalizations, jokes about Poles and stereotypes about Poland’s obsession with white bears, can finally realize what the practice of killing and harming was like.”