Is aborting a girl a crime or a right according to what the left decides?

A Pro-Life Group, Censored for Denouncing What Leftist Media Described as ‘Genocide’

The City Council of Rome has censored a pro-life campaign promoted by the citizen platform CitizenGO with this slogan: “Abortion is the first cause of femicide in the world.”

A campaign censored for remembering that abortion kills girls

According to Actuall, a senator from the leftist Partito Democratico, Monica Ciriná, asked the City Council of Rome to “stop the difussion of false information” which she described as “a new and horrible campaign of disinformation against women by extremist organizations.” We are facing a paradox: according to some, in a democracy it is possible to call “right” to murder innocents, but not to denounce that crime. And I say this because regardless of the beliefs and ideas that each has, and despite attempts to disguise that terrible reality, in scientific terms, abort is to end a human life in its prenatal stage. 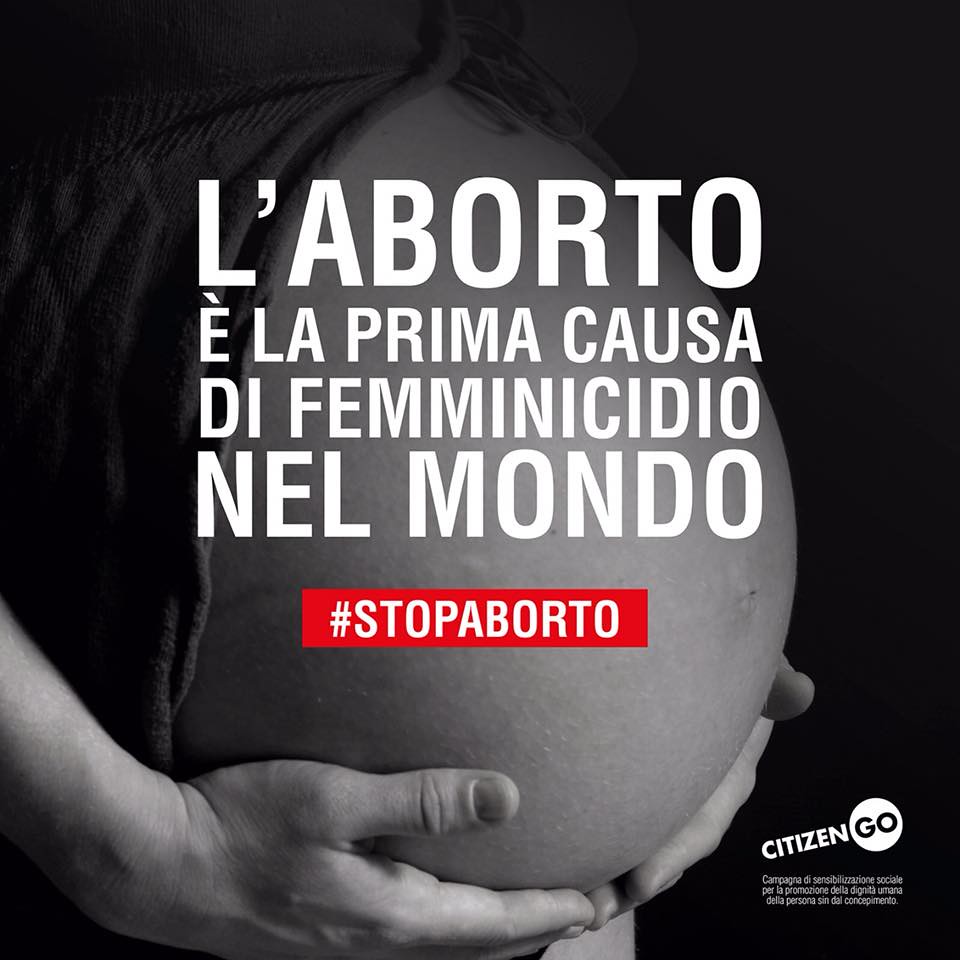 The campaign director of CitizenGO in Italy, threatened with death

In addition to seeing that campaign censored in a totally unjustifiable way in a democratic country, Filippo Savarese, campaign director of CitizenGO in Italy, has been threatened with death by a graffiti near his home. We have already seen this mafia behavior in other countries. Remember the warning made by St. Teresa of Calcutta in 1994: “Any country that accepts abortion is not teaching its people to love, but to use any violence to get what they want.” The abortion is a form of violence that is directed against the weakest and most defenseless. Who is able to justify something like that, is able to justify anything.

In addition to the paradox of a “democratic” senator calling for censorship for the one who thinks differently, these facts have left us with another curious situation. A few days ago, the progressive newspaper La Repubblica published an article attacking the pro-life people in relation to the CitizenGO campaign. The article warned that “the anti-abortion campaign will be increasingly heated, grotesque and shocking.” After accusing the pro-life people of using “tones and words that steal unscrupulously the lexicon of feminism”, the article spoke of “an advertising violence never achieved.” That is, for that leftist newspaper, the grotesque and violent is not killing a unborn child, but to denounce it.

The funny thing is that in the newspaper’s archive I found the following: in April 2011, La Repubblica published a story calling the abortion “silent genocide” and “massacre”. The article specifically referred to the selective abortion of girls in India. The news accused the ultrasound of the uterus of being “co-responsible for this silent massacre”, since “paradoxically it is designed to save lives, not to suppress them at the roots if they are of the ‘wrong’ sex”. That is to say, La Repubblica then recognized that abortion ends human lives, and specifically with the lives of young girls: the same as CitizenGO, the pro-life organization that the newspaper accuses of “publicity violence” for affirming that La Repubblica called “silent genocide.”

The Italian newspaper was not an isolated case in left-wing journalism: in Spain, the progressive newspaper El País crossed out the abortion of girls of “barbarism” and “murder” in a story published in September 2011, and in November 2016 the newspaper once again referred to it as “silent genocide,” noting that selective abortion “kills another 500,000 unborn females” in India each year. The far-left newspaper Público spoke of “atrocious crime” and “prenatal murder” to refer to it in December 2014. If we trust the political and media left, abortion should be the only fact qualifying as “crime” or “right” depending on whether you want to kill the baby because it is a girl or just because it is a nuisance.