Rescues or Helping the Trafficking of Human Beings? Judge It With an Illuminating Video

The controversy surrounding the Gibraltar-flagged ship Aquarius, about which I spoke to you here yesterday, is reviving the debate about the role that certain NGOs in the Mediterranean are playing.

39,000 Africans collected off the Libyan coast and taken to Italy in 2 months

The NGOs claim that they are limited to rescuing immigrants in international waters, and that in no case do they collaborate with the mafias that are dedicated to the trafficking of human beings. However, the data collected by the Gefira Foundation in this video that a reader sends me is very striking:

The data was collected in October and November 2016. The video shows a total of 15 boats that have been collecting thousands of immigrants in the sea very close to the Libyan coast, including the Aquarius, to then take them to Italy. The data was collected thanks to the positioning signals that the boats themselves emit, and which are collected and published by the website MarineTraffic.com. The Gefira Foundation, author of the video, points out the following: "NGOs, smugglers, the mafia in collusion with the governments, under the pretext of rescuing people, have shipped thousands of illegals into Europe." Likewise, that organization indicates: "During the two months of our observation, we monitored at least 39,000 Africans smuggled to Italy with the full consent of the European authorities."

The data of the video coincide with that stated by the European Political Strategy Center, an advisory body of the European Commission, in a report published in February 2017 entitled "Irregular Migration via the Central Mediterranean". The report stated the following: "Typically, NGOs operate in a range of 10 to 50 km off the Libyan coast." The territorial waters cover 22.2 km from the coast. The report also warned: "The geographic distribution clearly reveals that a majority of irregular migrants rescued in the Central Mediterranean are most likely not refugees in the sense of the Geneva Convention, given that some 70 % come from countries or regions not suffering from violent conflicts or oppressive regimes."

In the part that indicated where the ransoms are made, the report stated: "NGOs active in the area rescue both in the Libyan SAR area and inside Libyan territorial waters." And it included the following map in which it is observed that the rescues of these NGOs have been getting closer and closer to the Libyan coast, even going into their territorial waters: 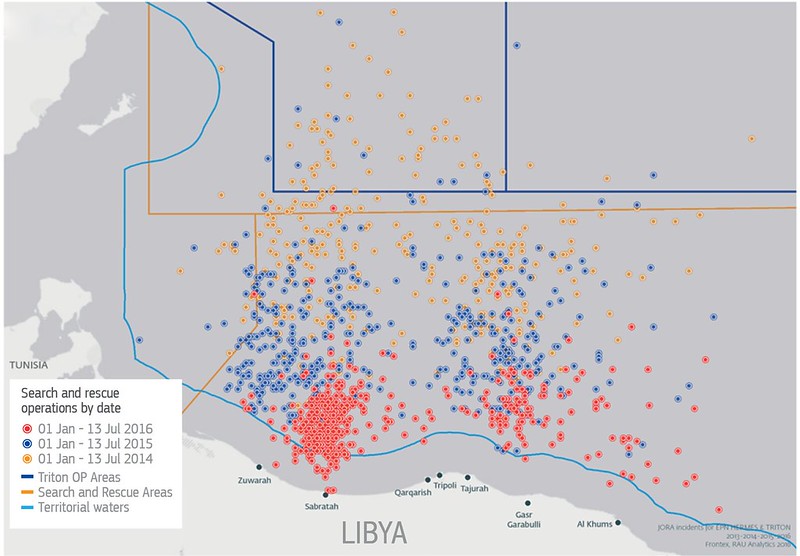 And now, that each one draw their own conclusions.