The Hill of the Angels, witness of the red terror in Spain: thus attacked a monument to Christ

Today marks the 100th anniversary of the inauguration of the Monument to the Sacred Heart of Jesus in the Cerro de los Ángeles de Getafe (Madrid), a ceremony presided over by the then King of Spain Alfonso XIII. 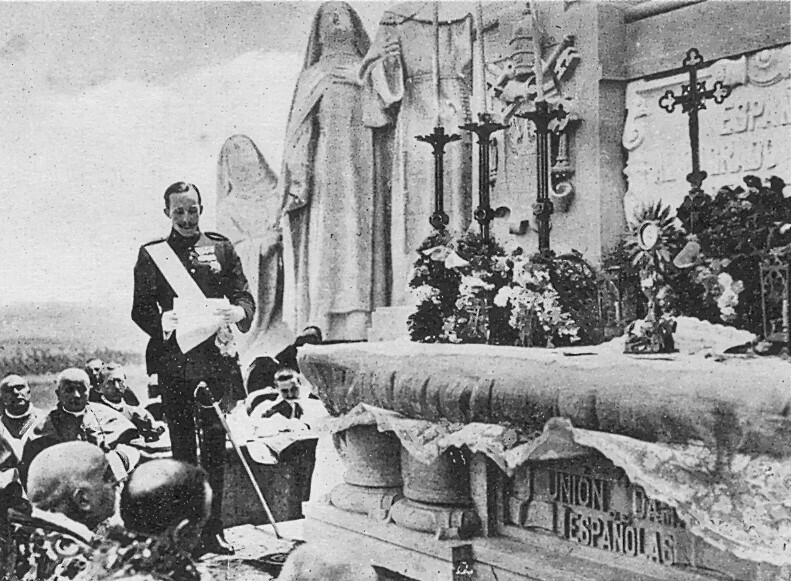 King Alfonso XIII reading the words with which he consecrated Spain to the Sacred Heart of Jesus, during the inauguration ceremony of the Cerro de los Ángeles monument on May 30, 1919.

The consecration of Spain to the Sacred Heart of Jesus

The choice of that place for the monument -the work of the architect Carlos Maura Nadal and the sculptor Aniceto Marinas y García- was not accidental, since the Cerro de los Ángeles (Hill of the Angels) has historically been considered the geographical center of Spain. According to the newspaper Abc reported the next day, the inauguration was attended by the government of Maura in full (except the Minister of Grace and Justice), the Nuncio of His Holiness, and the bishops of Madrid-Alcala, Barcelona, ​​Badajoz, Zion, Cuenca , Malaga, Segovia, Sigüenza, Zamora, Palencia, Guadix, Calahorra, San Luis de Potosi, Ciudad Real, Plasencia, Tenerife, Almeria and Fessea (Morocco), as well as the auxiliaries of Malaga, Valladolid and Toledo. 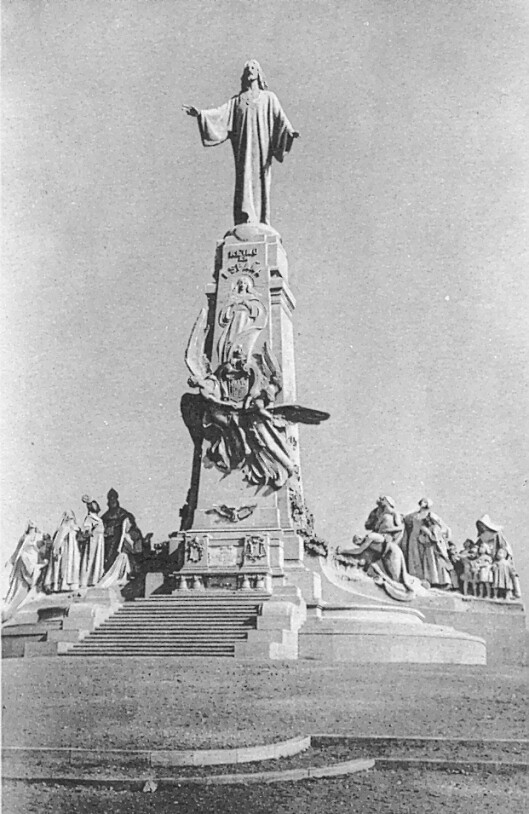 The old monument of the Cerro de los Ángeles, as it was inaugurated in 1919.

The numerous public dedicated an ovation to the Kings on their arrival at the Hill, giving cries in favor to Their Majesties, to Spain and to the Sacred Heart. In a moment of the celebration, the King “descended from the rostrum, followed by the entire Royal Family, and then climbed only to the pedestal where the altar was placed,” the Abc recounted. There he pronounced the following words:

“Sacred Heart of Jesus, Heart of God Man, Redendor of the world, King of Kings and Lord of those who dominate:
Spain, people of your inheritance and your predilections, prostrates today reverent before this throne of your kindness that stands for you in the center of the Peninsula. All the races that inhabit it, all the regions that integrate it, have constituted in the succession of the centuries and through common azares and mutual loyalties this great Spanish Homeland, strong and constant in the love of Religion and in its adherence to the Monarchy.
Feeling the Catholic tradition of the Spanish royalty and continuing joyfully the history of their faith and devotion to your Divine Person, we confess that you came to earth to establish the kingdom of God in the peace of the souls redeemed by your blood and in the happiness of the peoples who are governed by your holy Law: we recognize that you have as a coat of arms of your divinity to grant participation of your Power to the princes of the earth and that from You receive efficacy and sanction all the just laws in whose fulfillment the empire lies of order and peace. You are the sure path that leads to the possession of eternal life: inexhaustible light that enlightens the understandings so that they know the truth and propelling principle of all life and of all legitimate social progress, establishing themselves in You and in the might and softness of your grace all the virtues and heroisms that elevate and beautify the soul.
Come, then, to us your Most Holy Kingdom, which is a kingdom of justice and love. Reign in the hearts of men, in the bosom of homes, in the intelligence of the wise, in the classrooms of science and letters and in our laws and institutions of our country.
Thank you, Lord, for having mercifully delivered us from the common misfortune of war, which so many people have bled to death: continue with us the work of your loving providence.
From these heights that for you we have chosen as a symbol of the desire that encourages us to preside over all our enterprises, bless the poor, the workers, the proletarians all so that in the peaceful harmony of all social classes they will find justice and charity that makes his life smoother, his work more bearable. Bless the Army and the Navy, armed arms of the Nation, so that in the loyalty of their discipline and in the value of their arms they are always the nation’s safeguard and the defense of the right. Bless all those gathered here in the cordiality of the same holy loves of Religion and of the Fatherland, we wish to consecrate our lives to you as a reward for her to die in the security of your love and in the precious bosom of your adorable Heart. So be it.”

With those words, King Alfonso XIII consecrated Spain to the Sacred Heart of Jesus. A few years later, the Nation would spend one of its cruelest moments, which left a sad trail of blood and destruction in this monument. 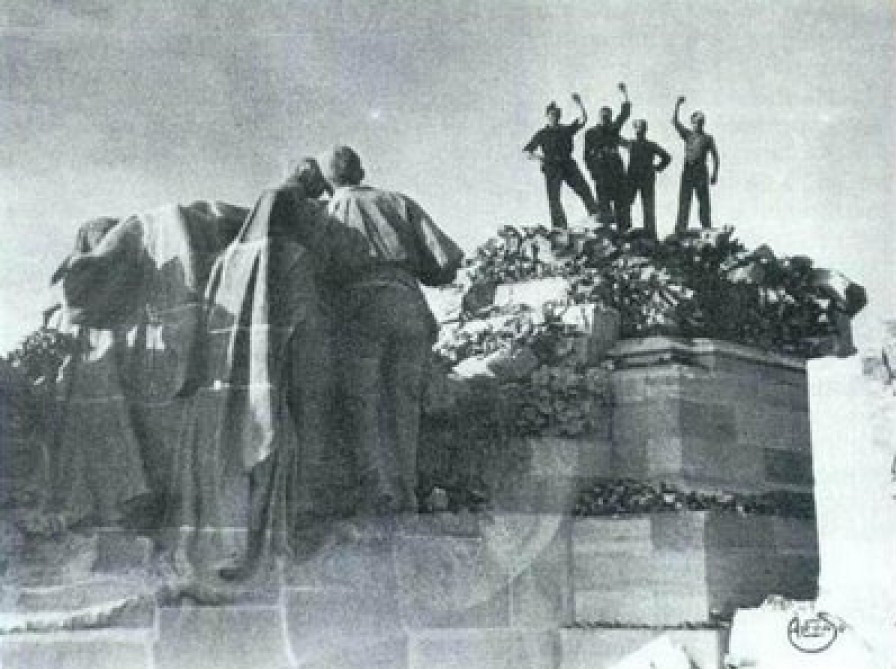 Red militia raising their fists, celebrating the destruction of the Cerro de los Angeles monument in August 1936, after dynamiting the statue of the Sacred Heart of Jesus.

On Saturday, July 18, 1936, the Spanish Civil War broke out. That same day, 30 members of the Workers’ Companies of San José and of the Sacred Heart of Jesus went to Cerro de los Ángeles for a vigil of nocturnal adoration. At the end of the mass, at dawn, most of the congregants returned to Madrid, except for five:

The five stayed in the Cerro to protect the monument. The inhabitants of a nearby farm reported them when they saw them praying the Rosary and blessing the table before eating. On July 23, they were killed by Red militiamen. At the time of his murder, the five looked at the monument, and his last breath was to shout a “Viva Cristo Rey” (Long live Christ the King!), before their bodies collapsed on the floor of Cerro, where they were abandoned for a whole day. Today the remains of those five martyrs rest inside the church located under the new monument. 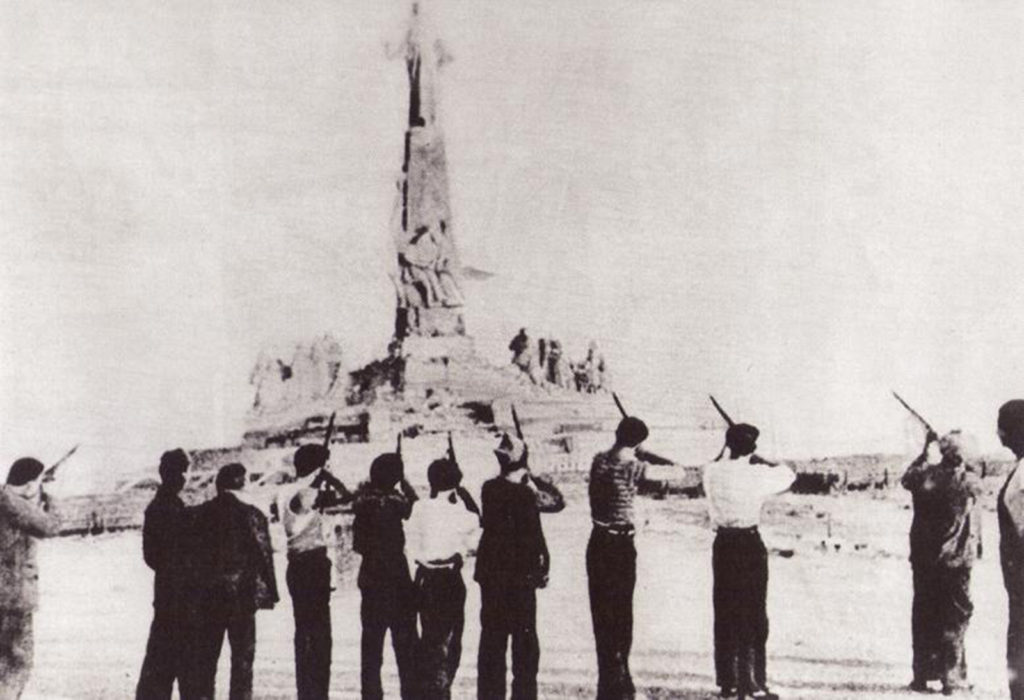 One of the most famous images of the anti-Catholic persecution unleashed by the republican side in the Spanish Civil War: Red militiamen shoot their rifles against the statue of the Sacred Heart of Jesus in the Cerro de los Ángeles on July 28, 1936. The militiamen themselves They took the photo of their “feat”.

On July 28, five days after that crime, red militiamen went to the Cerro de los Ángeles and a photo was literally “shot” of the monument. A real photo, but that some leftists have crossed out during years of false, although its authenticity is well documented: thus they want to erase the trace of that infamy. They destroyed all the sculptures with chisels, with cables pulled by a tractor and finally with dynamite. The militiamen needed five explosions to completely demolish the monument, since it miraculously resisted the first attempts to demolish it: a hatred identical to those shown years later by the Taliban and the ISIS terrorists with other architectural works. Finally, they changed the name to the place by “Cerro Rojo” (Red Hill).

After the war, the Cerro de los Angeles regained its original name and another monument was built, inaugurated in 1965 and located in the same place as the old one. The remains of the original monument were left in front of the new monument as testimony to the wave of anti-Catholic fanaticism unleashed by communism and its accomplices in Spain. Below these lines you can see some photos of the remains of the original monument that I made on April 19, 2011. Serve these images as a tribute to those martyrs. 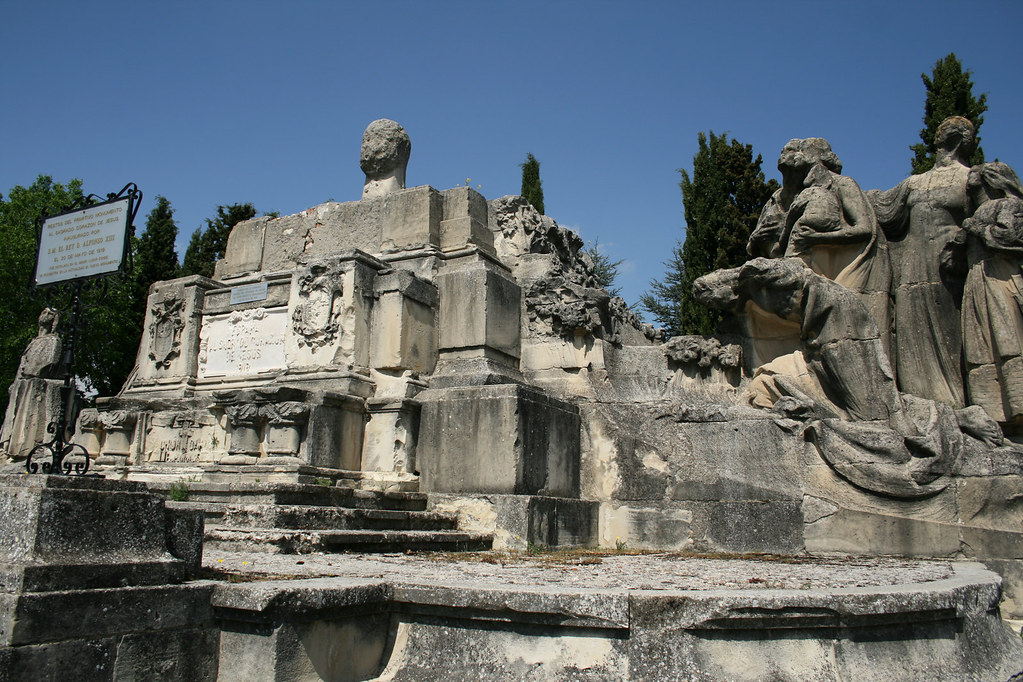 This is how the original monument was after being shot, chiseled and dynamited by the reds. 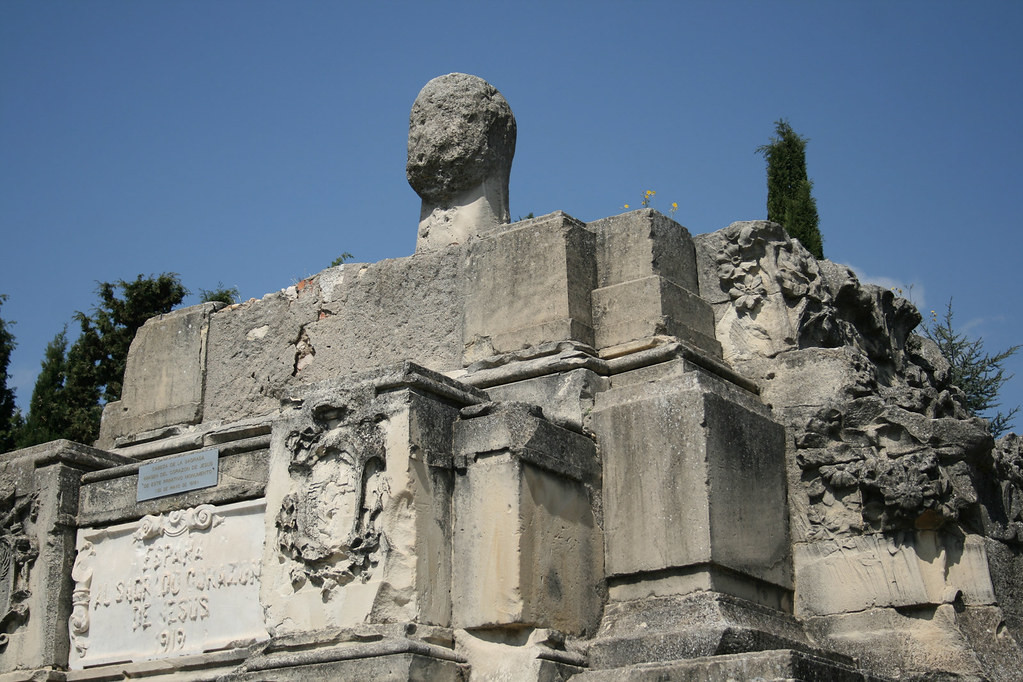 At the top of the old monument the head of the statue of the Sacred Heart of Jesus, totally disfigured, is preserved. 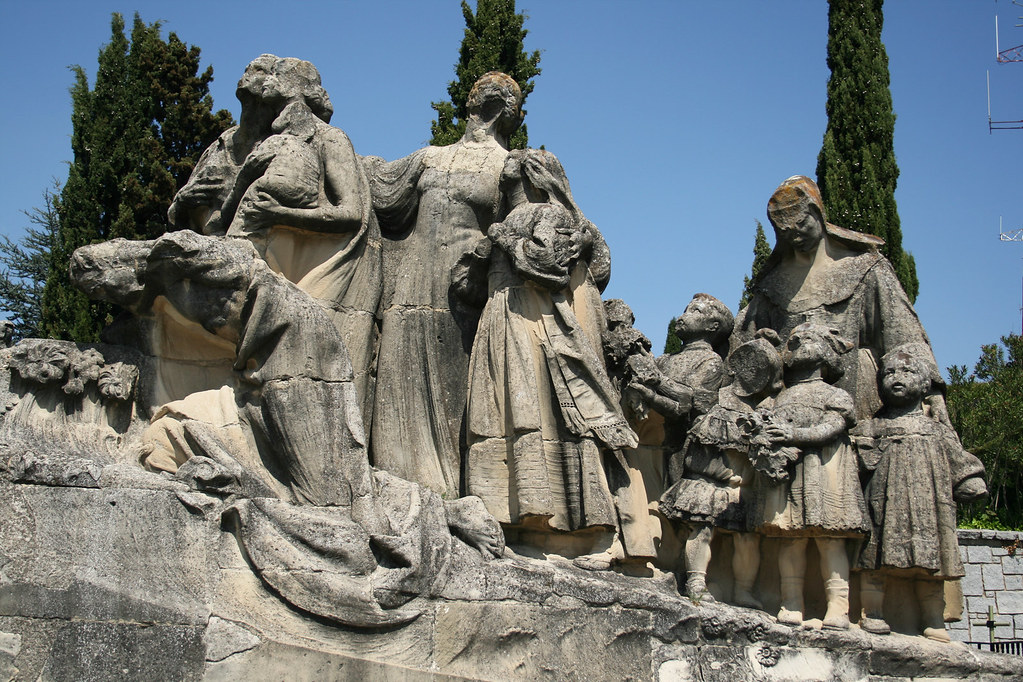 The group located to the left of Christ in the original monument represented the Militant Church. It is the best preserved of the sculptural assemblies of the ancient monument. 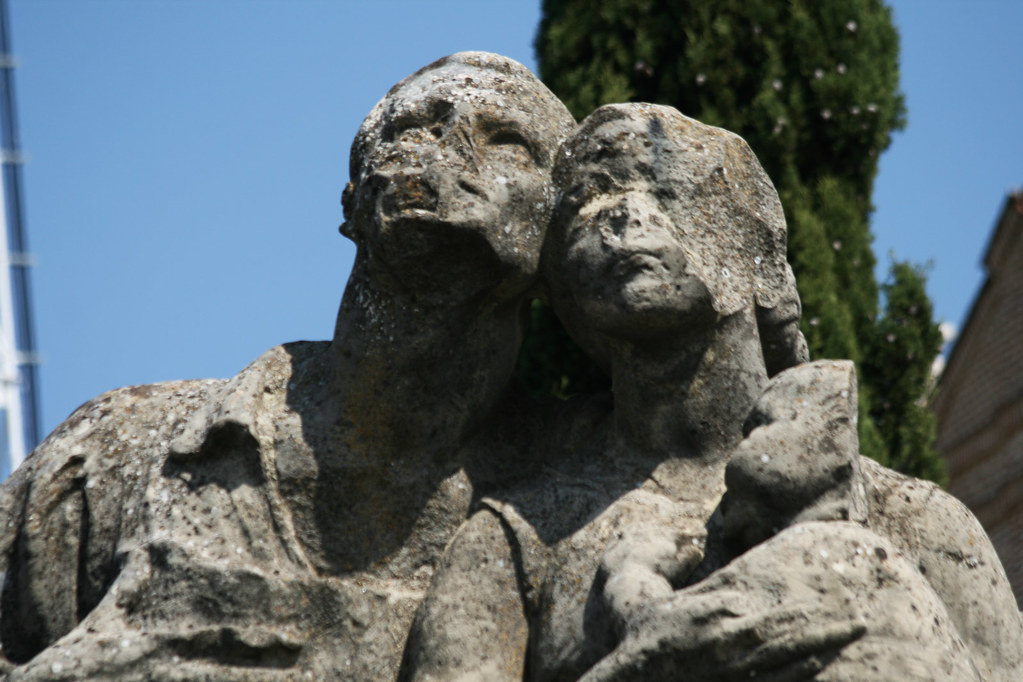 None of the sculptures of the original monument escaped destruction. This set represented a marriage with a small child. The spouses were smashed in the face. The baby’s head was broken. These three sculptures were part of a set of five, dedicated to representing virtue and love. 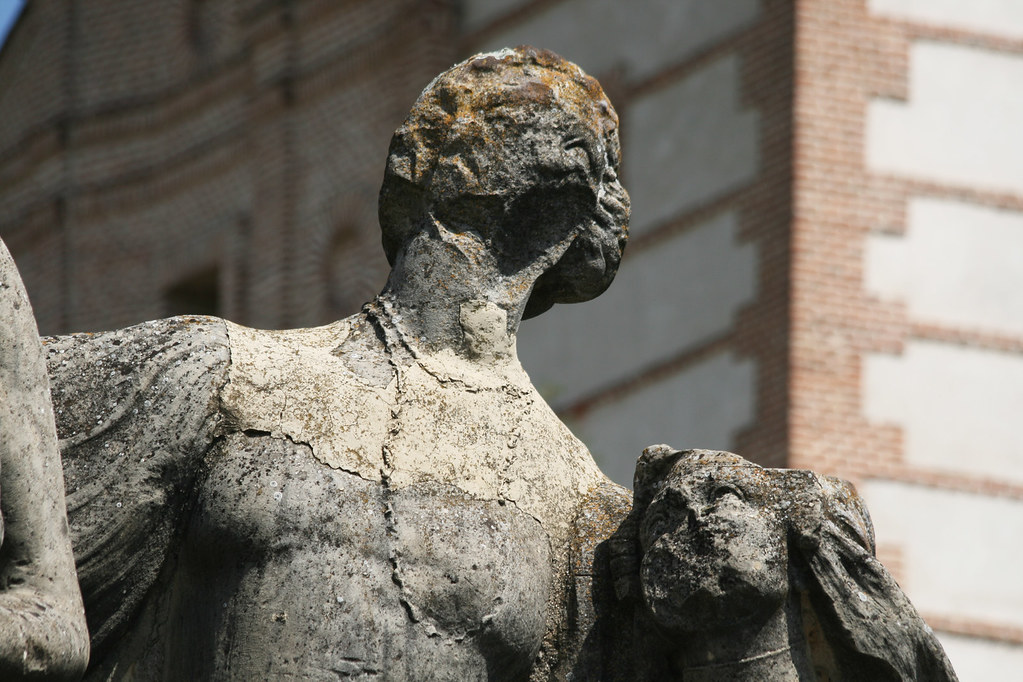 The other two sculptures, of an adult woman and a girl, of the set of five that represented virtue and love. The cruelty with the sculptures is evident. 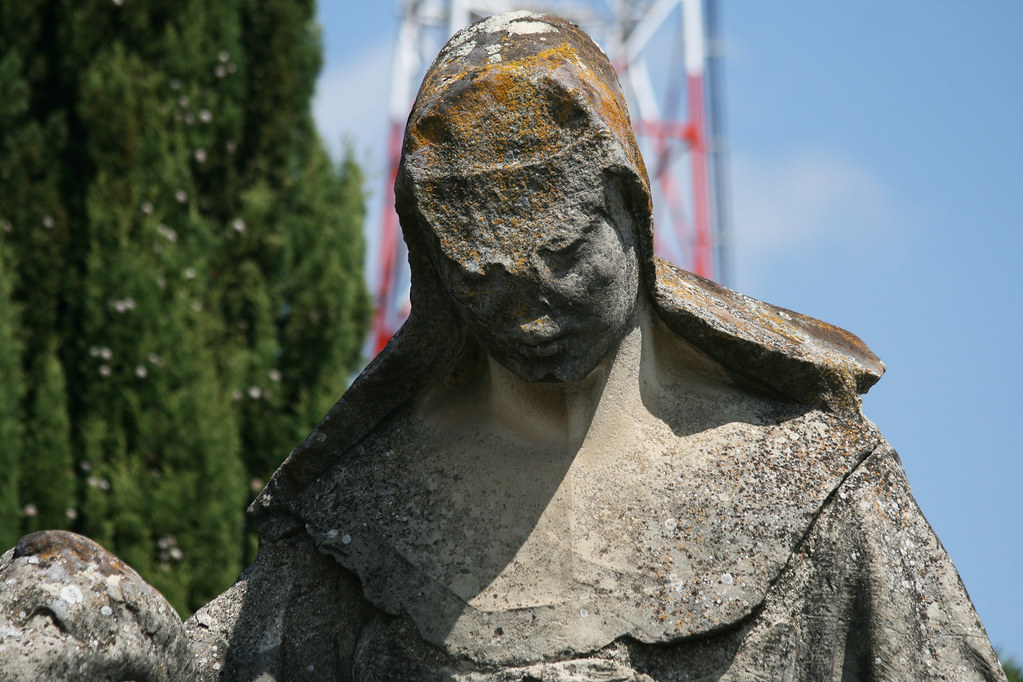 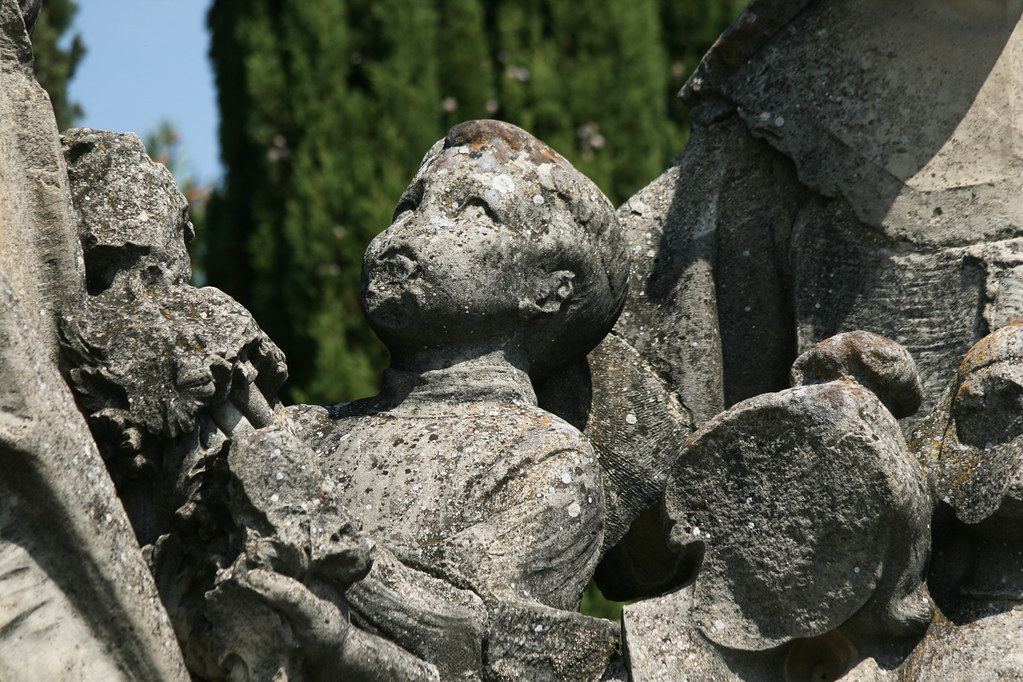 Even in the sculptures that depicted small children, the traces of the gunshots and the chisel blows of the militiamen are observed. In the image we see a boy (on the left) and a girl (with a shattered face, on the right). They were located, with three other sculptures of children, next to the image of the Daughter of Charity of St. Vincent de Paul, representing charity. 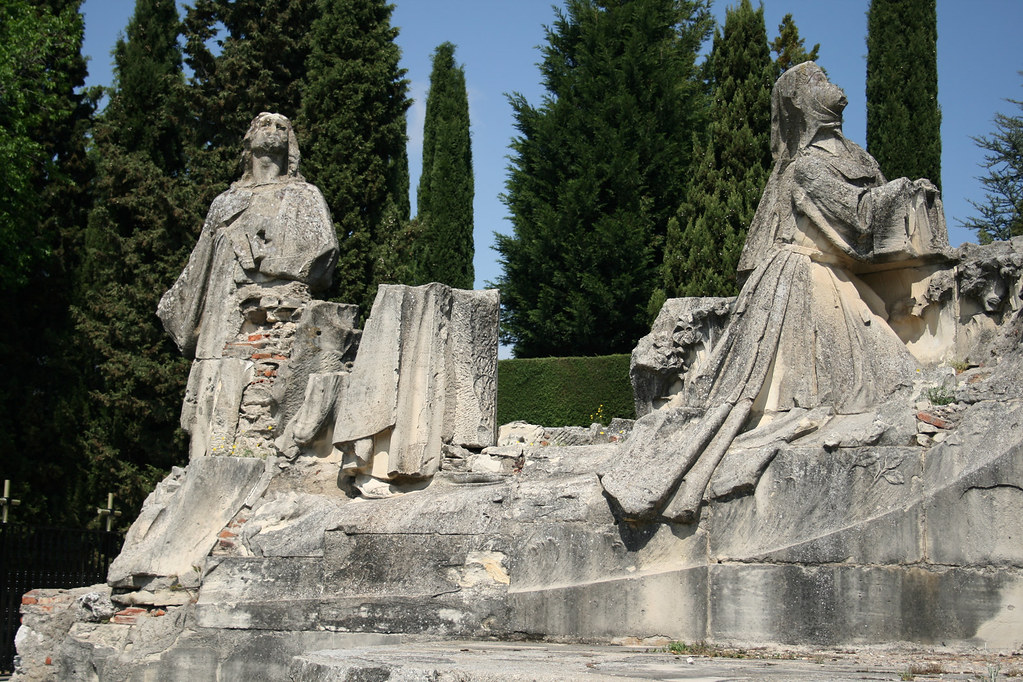 The part to the right of Christ in the monument was dedicated to the Triumphant Church. It was very damaged and only two sculptures remain relatively intact: that of St. John the Evangelist (on the left) and that of St. Margaret Mary Alacoque (kneeling on the right). 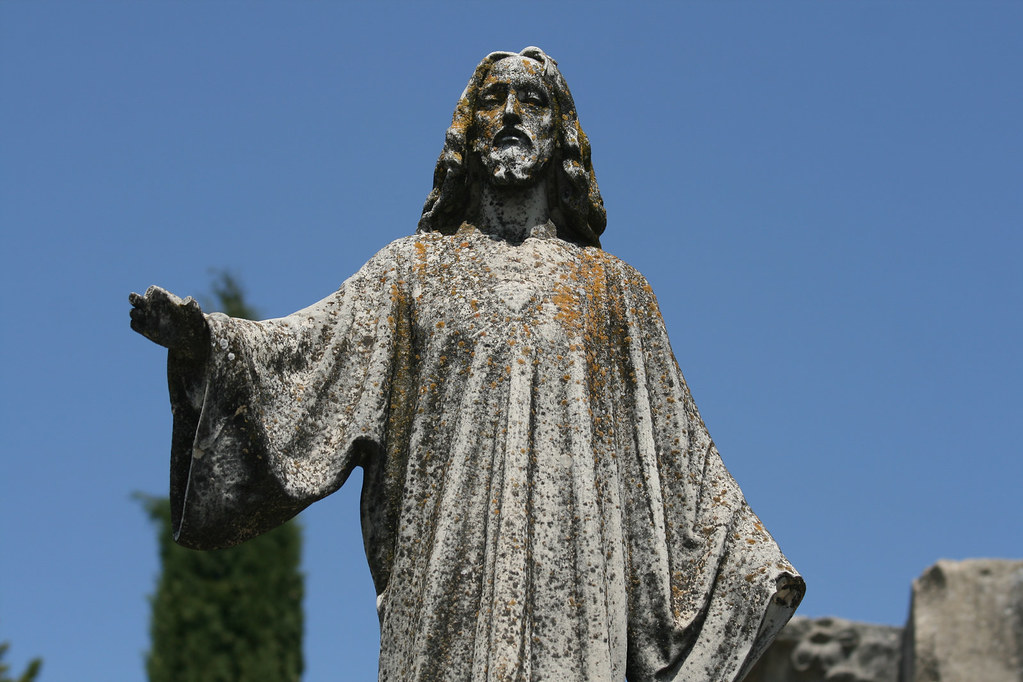 This small image of the Sacred Heart, without the left hand and with several broken fingers in the right hand, is preserved today at the foot of the old monument, on a pillar at the foot of the ancient stairways.
Share this post!
Compartir364
Twittear
WhatsApp
Flip
Compartir
Email
Other posts that speak of:
History
Alfonso XIII  Blas Ciarreta Ibarrondo  Cerro de los Ángeles  Elías Requejo Sorondo  Fidel Barrios Muñoz  Getafe  Pedro-Justo Dorado Dellmans  Spain  Spanish Civil Guard