This is how Saint James the Greater, the 'Son of Thunder', became the patron saint of Spain

July 25 is the day of Saint James the Greater, patron of Spain and particularly of Galicia, the Spanish region in whose capital, Santiago de Compostela, his remains are buried.

A fisherman from Galilee and a favorite disciple of Jesus

What is known about James is that he was the son of Zebedee and Salome, and was a fisherman like his brother Jonh. The whole family lived in Bethsaida, in Galilee, on the shores of Lake Tiberias. Before being a disciple of Jesus, James already knew Peter because he was a partner of his father. Both James and his brother John and Peter became the three favorite disciples of Jesus: they were with him when he performed most of his miracles, and accompanied him in the Garden of Gethsemane on the night he was arrested. Because of his strong temperament, both James and his brother John were nicknamed by Christ as "Sons of Thunder".

The saint who introduced Christianism in Spain

After the death, resurrection and ascension of Christ, James traveled to what was then called Hispania. Thus, he was who introduced Christianism into the current territory of Spain, gathering here some disciples who would continue his work. According to tradition, the Virgin appeared to St James on a stone column, in present-day Zaragoza in the year 40, before the assumption of Mary. This is the origin of the current invocation of the Virgin of the Pillar that is venerated in the Basilica of the Aragonese capital. After that apparition, St James returned to Palestine in search of Mary. Knowing his presence there and that he was one of the most important apostles of Christ, King Herod Agrippa I - grandson of King Herod who ordered the slaughter of innocents in Bethlehem - ordered to kill him, dying decapitated around the year 44. Thus, James was the first Apostle of Christ who suffered martyrdom because of his faith. 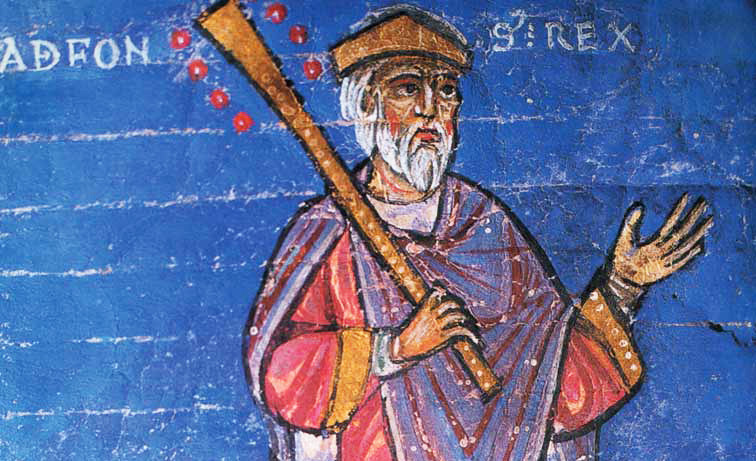 King Alfonso II of Asturias was the first pilgrim to the tomb of St James in the ninth century, after its discovery. He was also the one who appointed him patron of all Hispania (imagen: Xacopedia.com)

The finding of his grave and the first pilgrim: a King

After the martyrdom of St James, several of his disciples moved his body by sea to the Roman Gallaecia, the current Spanish region of Galicia. There they buried him near Iria Flavia (the current town of Padrón), in the forest of Libredón. There the burial was forgotten during the centuries that passed from the fall of the Roman Empire until the arrival of the Suebi in Galicia and the subsequent arrival of the Visigoths. In the year 813, a hermit named Pelayo who lived in the forest of Libredón went to the bishop of Iria Flavia to report him of the appearance of a star pointing to a place in the forest. Once they went there they found three Roman stone graves. One of the graves contained a decapitated corpse. The three buried bodies were identified as those of St James and his disciples Theodore and Athanasius. The news spread throughout the Kingdom of Asturias, to the point that King Alfonso II the Chaste visited the graves, ordering to erect a church at the site of the discovery. Alfonso II was the first of a long list of pilgrims who since then would go to the Apostle's tomb, converted into one of the largest pilgrimage centers of Christianity, in the city that today bears his name: Santiago de Compostela, a place name that some attributed to the Latin form "Campus Stellae", Field of the Star. 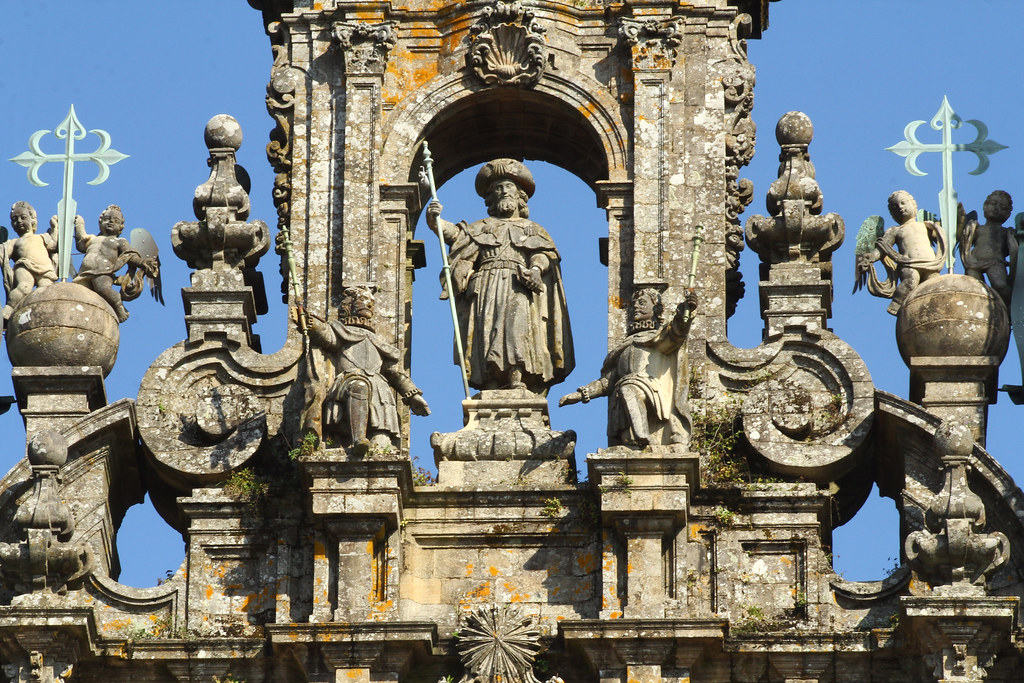 Image of St James Apostle on top of the facade of the central nave of the Cathedral of Santiago de Compostela, seen from the Obradoiro square.

The historical role of St James as patron of Spain

But before the discovery of his remains, a liturgical hymn from the end of the eighth century, "O Dei verbum", attributed to Beatus of Liébana, (the original Latin version can be seen here), was the first to quote the son of Zebedee as patron of Spain:

"Oh most holy and praiseworthy apostle,
Glowing and golden head of Spain!
Our defender and national patron
be our heavenly salvation against the plague
and away from us all sickness, sore and evil."

After the discovery of his tomb, King Alfonso II of Asturias (760-842) named St James "patronus et dominus" of all Hispania, being the first to give that recognition at the official level. During the reign of Ordoño I of Asturias (821-866), St James is mentioned as "noster et tocius Hispanie patronus" (our patron and of all Spain), according to Adeline Rucquoi in "Adversus Elipandum. The kingdom of Oviedo and the cult of St James". At the end of the 15th century, the Catholic Monarchs reaffirmed that patronage of the "well-ventured apostle Mr. St James Luz e patron de las Españas cabdillo and guide of the Kings dellas and the other saints and sanctuaries of the celestial court."

The millenary tradition of the national offering to the Apostle

Another Spanish tradition highlights the patronage of the Apostle: the "Vote of St James", established by Ramiro I of Asturias (790-850) in the ninth century, which consisted of an annual offering to St James in the temple where he is buried. The vote lasted for hundreds of years, until it was abolished by the Cortes of Cádiz in 1812, which caused a great disgust at the popular level. King Ferdinand VII recovered it, but was again annulled by the Revolution of 1869. That vote was recovered in 1937 by Francisco Franco, who established July 25 as a national holiday and the day in which that national offering would take place, which during the Franco regime was personally presented by the Head of State or by the chiefs of the VIII Military Region and the Maritime Department of Ferrol. At the moment the King of Spain carries out it annually, already in person or - more usually - through a royal delegate (the president of the Regional Government of Galicia or the mayor of Santiago, generally). With the arrival of democracy, July 25 ceased to be a national holiday, although it is still celebrated in Galician lands as Galicia's day.

The origin of its patronage on the Spanish Cavalry

In addition to the association between St James and the pilgrimage initiated by King Alfonso II (and that today is usually embodied in the iconography of the saint as a pilgrim), the cousin and successor of that monarch initiated an even more curious association. And it is that during the reign of Ramiro I of Asturias took place the Battle of Clavijo (844). According to legend, St James appeared in dreams to the King, encouraging him to refuse to offer the tribute to the Emirate of Cordoba that until then the Kingdom of Asturias paid as a sign of vassalage, and encouraging the King to invoke his name in battle. The Asturians did so, and by invoking St James they managed to defeat the Moors in Clavijo. The legend ended up leading to the appearance in full battle of St James mounted on a white horse and carrying a white banner, thus contributing to the victory of Christians against Muslims. Thus began another of the most common iconographic representations of the Apostle: that of Santiago Matamoros (Saint James the Moor-slayer). The motto of "Santiago y cierra España" ("St James and close Spain"; the order to "close", in cavalry, means to battle, rush to the enemy) became the war cry of the Christians during the Reconquest. The son of Zebedee became an azicate for the struggle for liberation for the Christians of the Iberian Peninsula, which had been conquered almost entirely by Muslims in the eighth century.

St James thus became saint patron of the Arm of Cavalry of the Spanish Army, a patronage that was ratified by the Royal Order of July 20, 1892. In fact, today the anthem of that arm ends with the war cry of "Santiago y cierra España" that Spanish riders exclaimed for centuries. 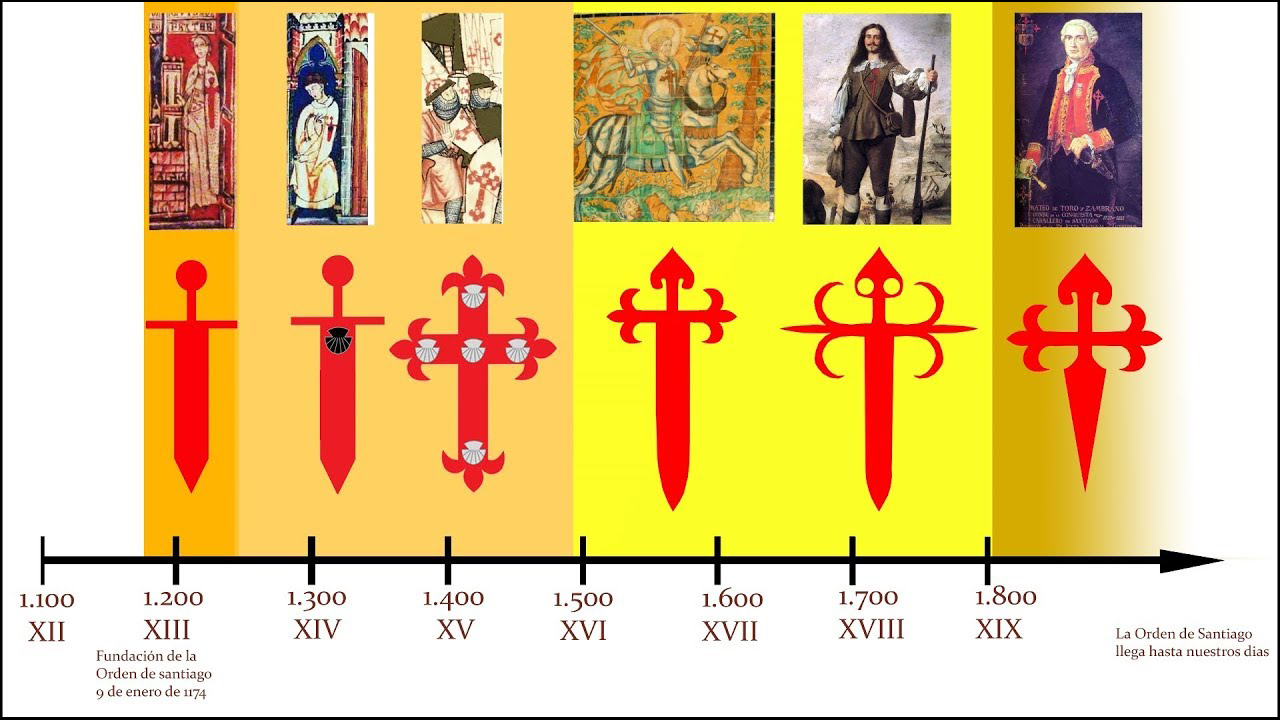 The evolution of the famous cross of the Order of Santiago since its foundation in the 12th century (Source: Forjadores del Tiempo).

In 1158, under the reign of Alfonso VIII of Castile (1155-1214), the Cavalry Order of Santiago was founded in Cáceres, which received the pontifical approval in 1175 of Pope Alexander III (1100-1181). It was one of the Spanish military orders founded during the Reconquest to contribute to the war effort against Muslims and to defend Christian territories. It was an order both religious and military, but with a difference from other orders such as the Temple: their knights could get married. Its history is so linked to the Reconquest that once it was completed in 1492 and after the death of its last Grand Master, Alonso de Cárdenas, in 1493, the mastership passed to the Kings of Spain, which have been inherited since then. Currently the Grand Master is H.M. King Felipe VI.

The origin of the famous cross that serves as a distinctive to the order goes back to a motto used by these gentlemen: "Rubet ensis sanguine arabum" (The sword that reddens with the blood of the Arabs). However, in the beginning the order used a different cross from the one we know today (you can see its evolution on these lines, and you will find more data in this interesting conference published by the YouTube channel of Forjadores del Tiempo).

On this day in Santiago I want to once again address to our patron saint the words dedicated by the hymn to the Apostle that is sung in the Cathedral of Santiago when the botafumeiro flies:

"Saint Champion, Patron of Spain,
Friend of the Lord:
defend your beloved disciples,
Protect your nation."