The massacre was ordered by a veteran of the International Brigades

The Pogrom of Ludmiłówka: a silenced killing of Jews at the hands of communists

I decide to write this post after running into a curious fact: searching the Internet for references in Spanish or English to this massacre, almost no results appear.

A crime silenced in the era of information

We currently believe that we have easy access to all kinds of information, especially those who handle languages with so many hundreds of millions of speakers such as Spanish or English, but it is not true. On the Pogrom of Ludmiłówka there is only one entry in the Wikipedia in Polish. I have only found references to it in English and Polish Wikipedia entries on Gwardia Ludowa: in the remaining eight languages in which that entry is available (including a large Russian propaganda entry) there is not a reference to those crimes that were silenced by the communist dictatorship established by Stalin in Poland in 1945, and that today remains largely silenced in this broad network of information that is the Internet. 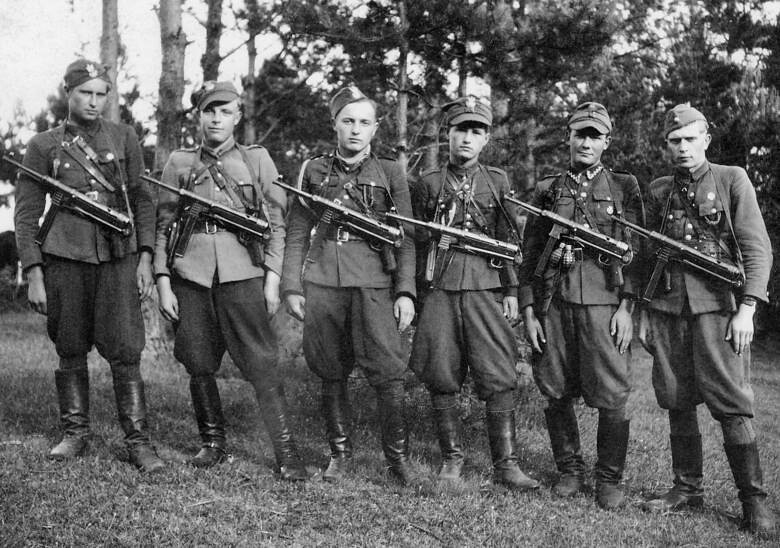 As was the case in France and other countries, under the Ribbentrop-Molotov Pact of 1939, the communists did not form resistance groups in the German-occupied Poland until they invaded the USSR on June 22, 1941. Polish Communism had was very weakened after the illegalization of the Polish Communist Party in 1929. In addition, many Polish communists who went into exile to the USSR ended up being killed in the "Polish Operation" ordered by Stalin and executed by his political police, the NKVD, in 1937 and 1938: between 50,000 and 60,000 Poles residing in the USSR, including many communists, were killed in that purge by simply being Polish. Without a communist party issuing orders, in mid-1941 some Polish communists formed in Warsaw the reduced Czerwonic Milicję (Red Militia) attached to the marxist group Młot i Sierp (Hammer and Sickle), with little activity and no presence outside the capital of Poland. A Stowarzyszenie Przyjaciół ZSRR (Association of Friends of the USSR) was also founded in Warsaw in the summer of 1941, also with a reduced presence. The independent socialist organization Spartakus also worked, which eventually disappeared in 1941 after an internal debate over whether to oppose the Germans or not.

Gwardia Ludowa: a communist guerrilla under the orders of Moscow

When Stalin decided to launch a Polish resistance related to Moscow, he found that he did not even have a satellite organization to give instructions to, so at the beginning of 1942 the Polska Partia Robotnicza (PPR, Polish Workers' Party) was founded Polish), subject to the dictates of Moscow. Stalin himself advised not to use the word "communist" in its denomination, because he believed that it provoked rejection among the Poles (this contradicted the Polish communists themselves, whose new party did not even reflect their ideology in their denomination). In March 1942 the armed arm of the PPR was formed, the Gwardia Ludowa (People's Guard), a communist militia that acted at all times under the orders of the USSR and even attacking the Polish resistance organizations loyal to the Government of Poland in the exile, based in London. 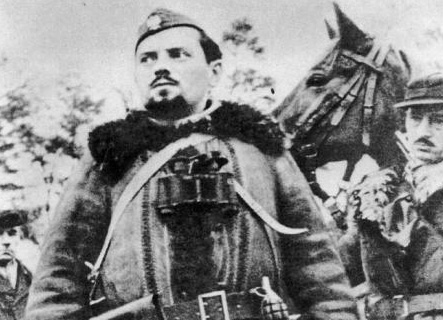 Grzegorz Korczyński during World War II, when he was commander of the communist partisans of the Gwardia Ludowa in the southern part of the Lublin region (Photo: Watażkowie z Gwardii Ludowej).

Korczyński: a veteran of the Spanish Civil War with a sinister history

One of the commanders of Gwardia Ludowa in the southern part of the Lublin region, in eastern Poland, was Grzegorz Korczyński, who had fought in the Spanish Civil War with the International Brigades, for which he was nicknamed "Hiszpan" (Spanish). During that war he used the false name of Stefan Kilanowicz, and served as political commissioner: his mission was to maintain the "ideological cleanliness" of the cadres of the Republican army carrying out secret executions of soldiers suspected of Trotskyism (according to reports sent to Moscow, they were purged about 500 brigadists). When the Spanish war ended, he went to France. In August 1942 he received orders to move from France to Poland, along with other Polish communists veteran of the Spanish Civil War, to be part of the new communist militia ordered by Stalin.

A group of communist partisans known for their pillages, murders and rapes

Rather than standing out for their actions - rather modest - against the Germans, Korczyński's group carried out various crimes against the civilian population, mainly pillages, murders and rapes of women. In fact, the first action of the communist commander after arriving in the Lublin area was to attack a Polish farm near Gościeradow, looting and raping the owner in a group. They also secured the release of between 30 and 40 Jewish prisoners from a concentration camp near Janiszów, who were enlisted in the communist militia. It should be noted that many Polish Jews felt sympathy for the Gwardia Ludowa, and in some units of that communist guerrilla there was a considerable number of Jewish guerrillas, often because of ignorance of what had happened to many of theirs who had fled to the USSR.

The heinous anti-Semitism of the communist partisans of Korczyński

Recall that after the German invasion of Poland, the Soviet NKVD delivered to the German Gestapo some 4,000 German Jews and communists who had fled to the Soviet Union. During the fall and winter of 1942, Korczyński's group carried out crimes that can only be interpreted as motivated by anti-Semitism. The first victim of this series of crimes was Jankiel Skrzyl, one of the liberated Jews from Janiszów: they stabbed him in the head in November 1942, after considering that the Germans captured him, he could expose all members of the partisan group. An absurd argument with which they could have executed the entire group.

The anti-Semitic crimes of the communist partisans of Korczyński continued in the following weeks in the villages of Ludmiłówka, Grabówka and the surrounding forests, where hundreds of Jews had been hiding fleeing from the Nazis. Five more Jews, including two women, were killed by Korczyński's group. Shortly after, the communist partisans met 30 Polish veterans of the September 1939 campaign who had fled a camp for Jewish prisoners of war in Lublin. These veteran Jews wanted to join Gwardia Ludowa, but they were killed by Korczyński partisans.

In Ludmiłówka they killed about 100 Jews, including women and children

The worst came when Korczyński and his guerrillas arrived in Ludmiłówka. The communist commander demanded a rescue of 600,000 zlotys from the Jewish refugees in the village, with the excuse that he needed that money to buy weapons. The guerrillas began to loot the Jews hiding in the village, killing several of them. These pillages ended up causing a conflict between the communists themselves, and a group of them ended up killing Stefan Staręgowski, one of Korczyński's closest collaborators, in an absence of the commander. When he returned to Ludmiłówka on December 6, 1942, he ordered the assassination of dissident communists.

The purge ordered by Korczyński extended against all the Jews hiding in the area, considering them complicit in the dissident communists. An accusation that demonstrated, once again, the prejudices of the communist commander and his henchmen. About 100 Jews were killed, including women and children, with guns, grenades, sticks and various tools. The leader of the dissident communists, Jan Gruchalski, was arrested by the Korczyński guerrilla in February 1943. After being tried by a court formed by the partisans themselves, one of Korczyński's henchmen, Jan Pachuta, beheaded him by several blows of saber. Those facts confirmed the terrible opinion that many Polish civilians and other groups of the Polish resistance had about Gwardia Ludowa. 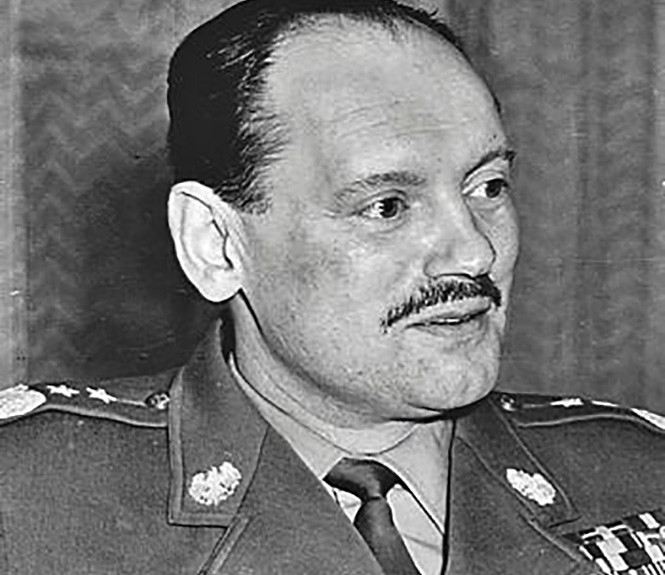 Grzegorz Korczyński in 1963, when he was head of the Second Board of the Intelligence General Staff of the Polish Army during the communist dictatorship (Photo: Trybuna Ludu / Wikimedia).

In September 1943 Korczyński went to Warsaw, being promoted to Lieutenant Colonel and receiving the appointment of head of the operational department of Gwardia Ludowa. In June 1944 he was appointed commander of the province of Lublin of the new Milicja Obywatelska (Citizen Militia), the police service of the new Polish communist regime sponsored by Stalin. In April 1945 he began working for the Ministry of Public Security of the communist dictatorship. Two months later he returned to Lublin to deal with the repression of the Polish resistance, which after fighting against the Germans, was now preparing to fight the Soviets, the new occupants of the country. Korczyński noted for his brutality in that repressive action, committing dozens of murders. To this we must add that Korczyński and his former guerrilla companions tried to assassinate, after the war, all those who dared to speak of the Pogromo of Ludmiłówka. Already with the rank of general, Korczyński was appointed deputy minister of the Ministry of Public Security in 1946. 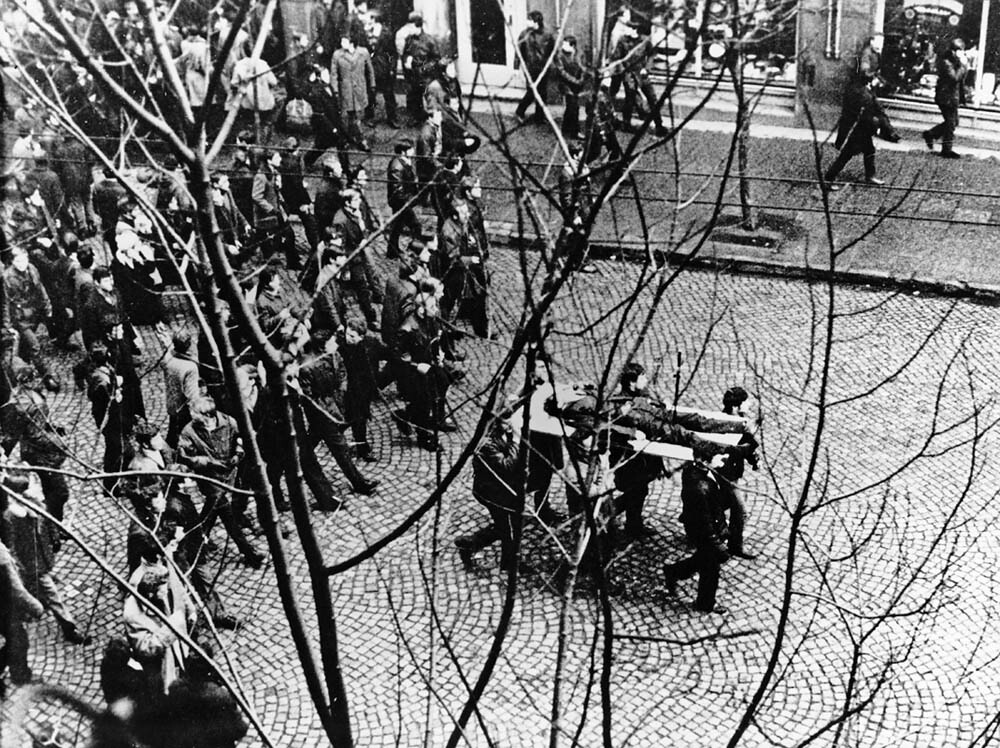 Protesters carrying the coffin with the remains of the young Janek Wiśniewski, killed by the communist regime police during the protests of December 1970 in Poland. Grzegorz Korczyński ordered a brutal repression that left 42 dead and more than 1,000 injured (Photo: Edmund Peplinski / Tygodnik Solidarność).

On May 21 and 1950 Korczyński was arrested for the crimes he had committed in the war. A long investigation was opened that lasted four years. On May 22, 1954, he was sentenced to life imprisonment. However, on December 24 of that same year, the Supreme Court reduced his sentence to 15 years. In April 1956 I was already back on the street. In November of that year his sentence was revoked, and in 1957 any investigation against him was suspended. The war criminal not only enjoyed impunity, but also in December 1956 he was appointed head of the Board of the Second Staff of the Intelligence of the Polish Army.

Between 1965 and 1971 Korczyński was Deputy Minister of National Defense of the Polish communist dictatorship. In December 1970, he brutally repressed the protests of workers in several cities in Poland, leaving a trail of 42 dead and more than 1,000 injured. The communist regime itself considered that Korczyński had exceeded and was dismissed and sent as an ambassador to Algeria. He committed suicide in that country, according to the official version, on October 22, 1971. He not only went unpunished for his crimes, but also, and in a last affront to his victims, was buried in the Powązki Military Cemetery, in Warsaw, where his remains rest today in the same place as many Polish heroes he helped to kill. The communist dictatorship even dedicated a commemorative seal, as if he were a hero. At the same time, the Polish communist dictatorship and the USSR dedicated themselves to slander the Polish resistance, accusing it of that anti-Semitism that those communist partisans so outrageously displayed.

To this day the Pogrom of Ludmiłówka has been practically forgotten outside Poland, even by the same media that unfairly accuse the Poles of "anti-Semites", but ignore the atrocities committed by the communist partisans in that country. Serve this entry as a tribute and I remember the victims of the Ludmiłówka massacre.