These days the 75th anniversary of the defeat of Nazism is celebrated, a defeat that for many Europeans did not mean the "liberation" of which some speak.

Certainly, the inhabitants of the countries that were liberated by the Western Allies ended up achieving freedom, since after World War II they became democratic countries again. However, the countries that came under Soviet occupation went from being subjected to the nazi yoke to being subjected to the communist yoke. There was no liberation: the dictatorship simply changed of color. In fact, resistance movements that had fought against nazi Germany later went on to fight against communism. Those resistance movements have been practically forgotten. In many cases they waited for years for the support of the Western Allies, without receiving it. I will review the history of some of these groups below.

The Polish resistance against communism was by far the largest: it is estimated that it numbered between 150,000 and 200,000 combatants and collaborators before 1947, with a few hundred continuing in the following years. At the end of World War II, the Polish resistance against the Germans had been greatly weakened by their defeat in the Warsaw Uprising of 1944 and also by the persecution to which it was subjected by the Soviets. Resistance groups loyal to the Polish government in exile were accused of "fascists" by the USSR for the simple fact of not being communists, and the Soviets even falsely accused them of collaborating with the nazis, a lie that covered up the alliance itself between Hitler and Stalin to invade Poland in 1939. 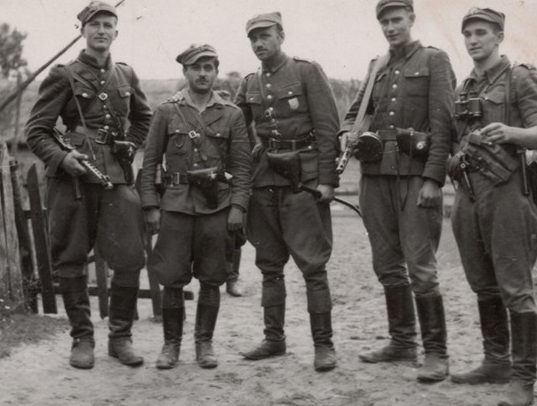 Colonel Łupaszka, center, along with other officers from the Armia Krajowa (AK, Home Army) in 1945. His Vilna Brigade, which had fought against the Germans, continued the fight against the Communists until 1947.

In July 1945 and February 1947, the communist dictatorship established by Stalin in Poland enacted two "amnesties" for the non-communist Polish resistance, as if having fought the nazis without being a communist made them criminals. Despite its slanderous foundation, tens of thousands of members of the resistance took refuge in that amnesty after many years fighting in the open. However, that amnesty was nothing more than a trap to capture the resistance and subject its members to prison, torture and death, with episodes such as the massacre of Poles in Uroczysko Baran by the Soviets.

This situation also saw some soldiers who had fought in France, Belgium, the Netherlands and Italy framed in the bodies of the Polish Army that fought alongside the Western Allies. Because of this, many Polish soldiers were forced to remain in exile in the United Kingdom and other countries. The new communist regime "rewarded" their heroic fight against nazism by stripping everyone of Polish nationality. 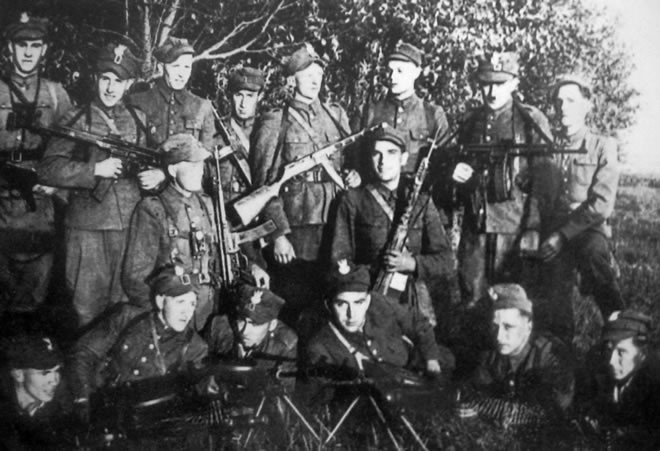 The "Szumowo" Company of the Armia Krajowa in the Zambrów District. This unit of the Polish resistance continued the fight until 1947.

It should be noted that, as had happened in the Second World War, these resistance groups were uniformed military units that carried out their lives mainly in forests, with the support of the local population and carrying out small acts of sabotage. In some cases they kept the uniforms of the Polish Army from 1939, often distinguished by a metal plate with the image of the Virgin of Częstochowa in the jacket left pocket. 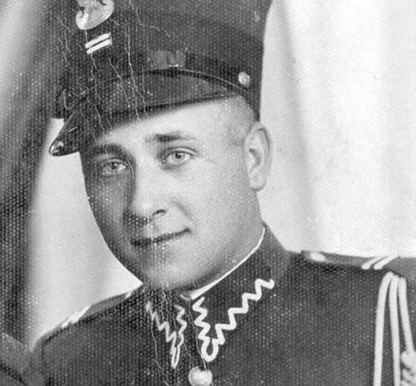 Józef Franczak "Lalek" was the last "cursed soldier" of the Polish resistance against communism. He was assassinated on October 21, 1963. He was 45 years old and had been fighting in the resistance for 24 years.

The AK gave way to new groups such as Wolność i Niezawisłość (WiN, Freedom and Independence) and the Konspiracyjne Wojsko Polskie (KWP, Polish Clandestine Army). One of the former AK members who fought on the WiN was Witold Pilecki, the Polish officer who infiltrated Auschwitz to unveil the Holocaust, a war hero killed by the Communists in 1948. Another of the Polish resistance groups who continued With their fight after the end of the Second World War were the Narodowe Siły Zbrojne (NSZ, National Armed Forces), who, unlike other resistance movements, had been fighting against the Germans and the Soviets alike before 1945.

The NSZ were destroyed by the Communists in 1947 and the WiN in 1953, although some of their members continued the fight until the 1960s. Known as "cursed soldiers" in Poland for the slander and persecution the Communists launched against them, their last fighter, Józef Franczak "Lalek", was assassinated on October 21, 1963 in Majdan Kozic Górnych, in eastern Poland. He was 45 years old and had been fighting in the resistance for 24 years.

In Latvia, Lithuania and Estonia, members of the anti-communist resistance were known by the same name: "Forest Brothers", because they continued fighting in the forests of those three countries. Called Meža Brāļi in Latvian, they numbered around 10,000 fighters originating from groups such as the Latviešu Nacionālistu Savienība (Latvian Nationalist Union) and the Patriotu Organizācija (Patriot Organization), formed in 1941, and the Latvijas Centrālā Padome (LCP, Latvian Central Council), created in August 1943. 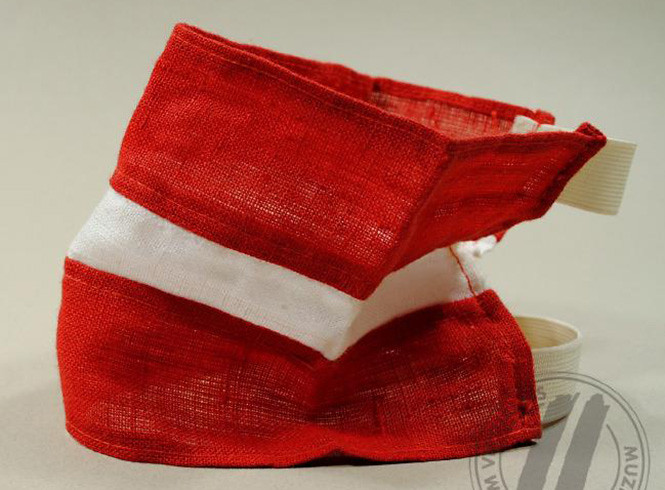 The armband in the colors of its national flag worn by the Latvian resistance against the Soviets (Photo: Jaukajiem.id.lv).

The objective of these groups was the restoration of the independence of Latvia - invaded in 1940 by the USSR and in 1941 by Germany - as a democratic country. On December 10, 1944, the Latvijas Nacionālo Partizānu Apvienība was founded (LNPA, Latvian National Partisan Organization), faithful to the LCP and consisting of uniformed military units of up to 100 people, in the style of the Polish resistance. The origin of its members is very varied, and included deserters from the German Army and the Soviet Army, as well as victims and fleeing from the brutal repression and mass deportations launched by the Soviets in Latvia. 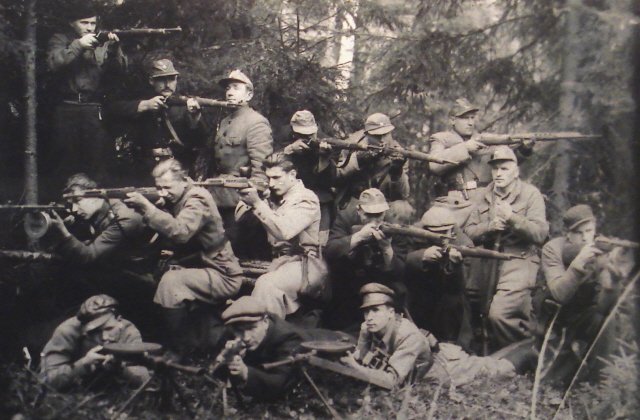 Likewise, the Catholic priest Antons Juhņevičs “Vientulis” founded in January 1945 the Tēvzemes Sargu (Partizānu) Apvienības, TS(P)A, Organization of the Patriotic Guard (Partisan), which was destroyed in 1947 with the elimination of its founder. In turn, the LNPA would maintain its guerrilla activity until 1953. From that date, due to the persecution of the Soviet NKVD, its activity was reduced. The last Forest Brother from Latvia, Arnolds Spārns, left the fight on December 31, 1959. It should also be remembered that a Latvian soldier, Jānis Pīnups, remained in hiding until 1995, after having deserted from the Soviet Army in 1944. 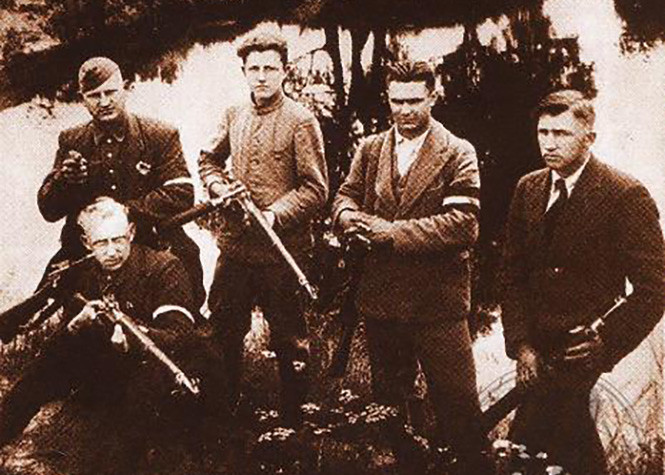 Lithuania: the "Mežabrāļi" continued the fight until 1969

Like Latvia and Estonia, Lithuania was invaded by the Soviets in 1940 and by the Germans in 1941. As in the case of other countries, many of its partisans were known as "Forest Brothers" (Mežabrāļi, in Lithuanian). They numbered about 50,000 fighters, many of whom were still wearing Lithuanian Army uniforms from before the Soviet invasion. It should be noted that, unlike what happened in Poland, during the Second World War the Lithuanian resistance mainly developed its armed action against the Soviets. The main group of the Lithuanian resistance, Lietuvos Laisvės Armija (LLA, Lithuanian Liberation Army), was created on December 13, 1941 and continued to fight until 1953. 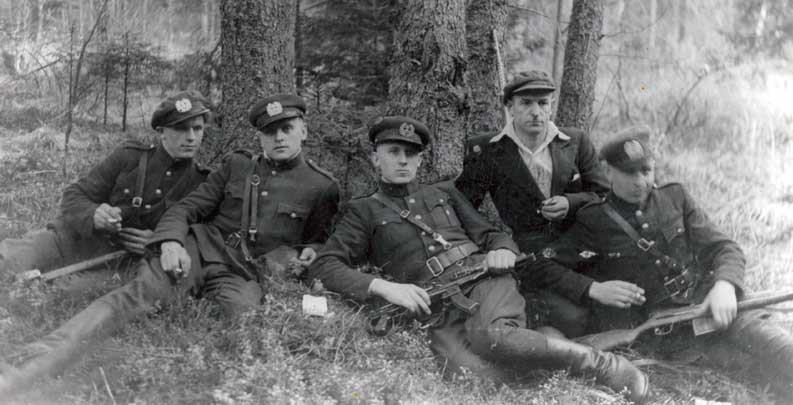 Members of the Lithuanian anti-communist resistance, several of them in uniforms worn by the Lithuanian Army in 1940 before the Soviet invasion (Photo: Bernardinai.lt).

Already in 1949 the Lietuvos Laisvės Kovos Sąjūdis (LLKS, Union of Lithuanian Freedom Fighters) was created, led by Jonas Žemaitis. The LLKS was organized militarily in three regions (southern, western and eastern Lithuania), developing its guerrilla activity in three military districts. The LLKS main structure was destroyed by the Soviets in 1953. 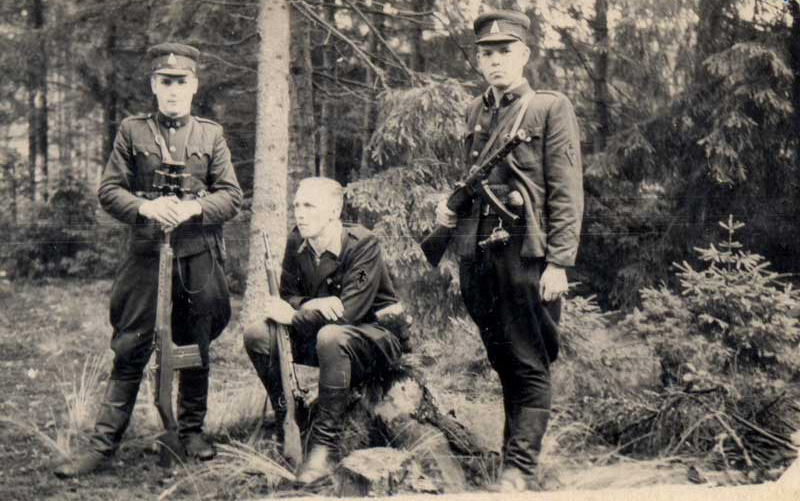 Three members of the Lithuanian anti-communist resistance. The Forest Brothers used a wide variety of weapons, in most cases captured from the Germans and the Soviets (Photo: Bernardinai.lt).

The last LLKS commander, Adolfas Ramanauskas, was arrested by the Soviets in October 1956 and assassinated in November 1957. The last Forest Brother of Lithuania was Kostas Liuberskis "Žvainys", assassinated by the Soviets in October 1969 in Lunkevičienė, after being reported by the owner of a farm in which he had taken refuge. Liuberskis had been an aviator in the Lithuanian Air Force before the war. His first arrest, from which he managed to escape, was in 1950. Thus, he spent at least two decades in the resistance, hiding in the woods and living underground. 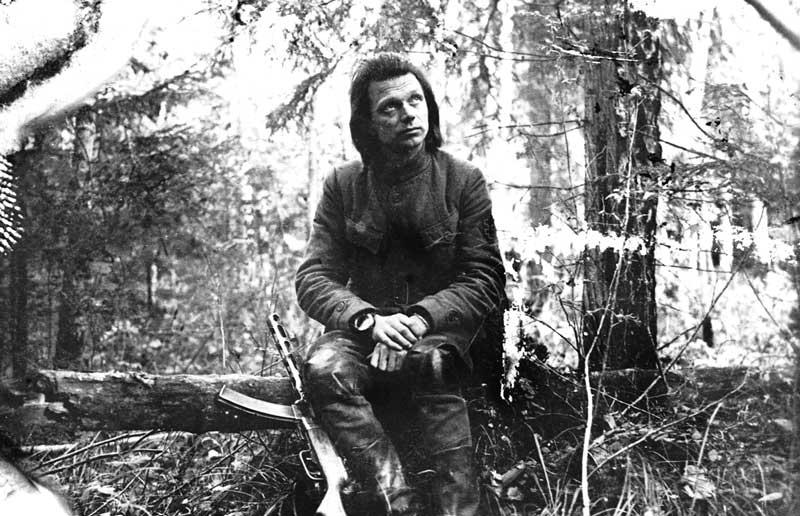 Kostas Liuberskis "Žvainys", the last Brother of the Forest of Lithuania, killed by the Soviets in October 1969 (Photo: Bernardinai.lt).

Estonia: the "Metsavennad" continued the fight until 1955

In Estonia members of the anti-communist resistance were also known as "Forest Brothers" (Metsavennad, in Estonian). Following the 1940 Soviet invasion and the mass deportations of Estonian citizens to Siberia, thousands of Estonian soldiers and civilians (up to 10,000, according to some sources) joined the resistance. The first clashes of the Estonian resistance against the Soviets took place in June 1941. As in Lithuania, the ranks of the Forest Brothers in Estonia also ended up feeding on Estonian deserters from the German Army and the Soviet Army. Entire families were forced to survive in the woods in hiding after their young men refused to enlist in the Red Army. 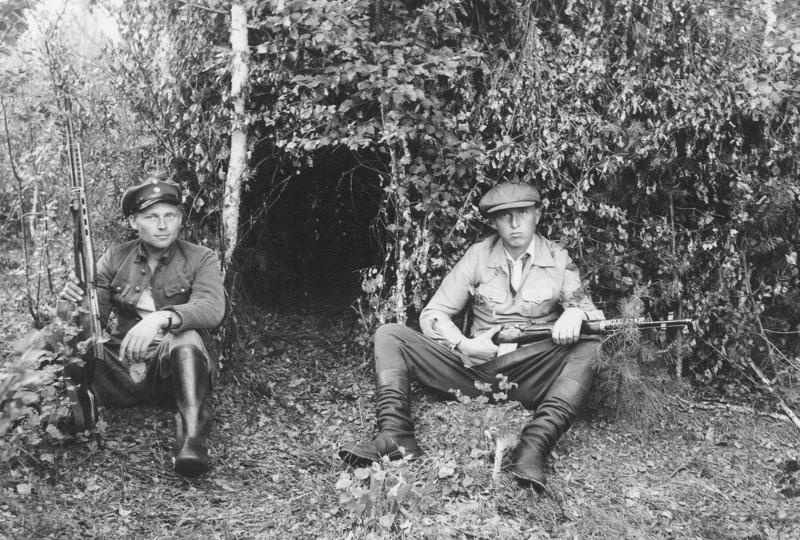 As in other countries, Estonian fighters were expecting a new war that would pit the Western Allies against the USSR and bring them democracy, but that never happened. Less organized than its counterparts in Poland, Lithuania and Latvia, the Estonian resistance had as its main organization the Relvastatud Võitluse Liit (RVL, Alliance of the Armed Struggle), loyal to the Estonian Government in exile, created in the spring of 1946 and directed by Endel Redlich "Robber". The RVL was destroyed by the Soviets in 1948. The last Estonian Forest Brothers gave up arms in 1955, after a last offer of amnesty by the Soviet Government. 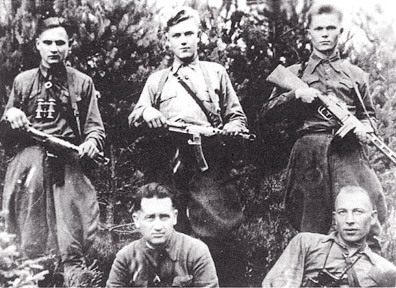 In addition to the aforementioned, other anti-communist guerrillas were formed in Eastern Europe in the last months of World War II and in the postwar period: the Goryani of Bulgaria (1944-1954), the Romanian resistance (active in some cases until 1960), the Armata Neagră in Moldova (1949-1950, made up of several dozen peasants) and the Balli Kombëtar in Albania (1943-1945, which went from fighting the Italians to fighting the communists).

There were also other anti-communist guerrillas but which have little or nothing to do with examples such as that of the Polish resistance and the Baltic Forest Brothers, such as the Croatian Križari (1945-1950, linked to the Ustaša fascist movement) or the Ukrainian Insurgent Army (UPA, 1942-1956), a nationalist and anti-Semitic movement that in some cases fought against the Germans and in others collaborating with them, or also fighting against the Soviets and against the Polish resistance and perpetrating killings of Jews and Poles, such as the Volinia massacre, in which more than 80,000 Poles were killed. Today the members of the UPA are considered in Poland, with good reason, as war criminals.

Main photo: Soldiers of the 'Zapory' Association of Wolność i Niezawisłość (WiN, Freedom and Independence), one of the organizations of the Polish resistance to communism, in the summer of 1946.