Naliboki: the savage murder of 128 Polish men, women and children by the Soviets

In history books and the media, the word "liberation" is often used to refer to the Soviet advance into German-occupied Poland.

A rural community made up of Polish Catholics and Jews

The historical facts differ a lot from that idea of "liberation" that some affirm. An example of this is what happened in the town of Naliboki, a rural community of mostly Catholic Polish farmers, with a small community of Jewish inhabitants, located in eastern Poland at the time of the Second Polish Republic (1918-1939). On July 10, 1919, in this town the Polish Army waged a battle against the Bolsheviks in the framework of the Polish-Soviet War, defeating the Poles. 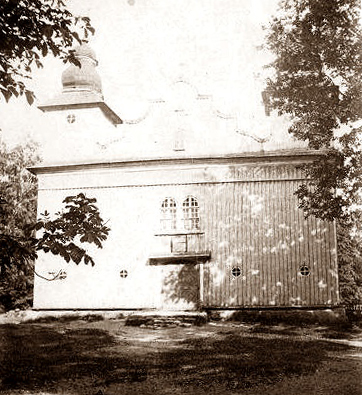 The Church of Saint Bartholomew in Naliboki, burned down during the May 1943 attack in which the Soviets massacred 128 inhabitants of this Polish town (Photo: Mariusz Łojko / Kresy24.pl / Wikimedia).

The Soviet invasion of 1939 and the German occupation in 1941

In 1939 there were two churches in the town: the oldest, dedicated to Saint Bartholomew, was built in 1447, and the most recent, dedicated to Saint Joseph, was erected in 1936. In September 1939 this town was invaded by the Soviets and incorporated into the Soviet Republic of Belarus (today it belongs to that country, being known as Nalibaki). In June 1941 the Germans occupied the town during Operation Barbarossa, deporting part of its Jewish population to concentration camps (another part of Naliboki's Jews fled, joining groups of Jewish partisans). 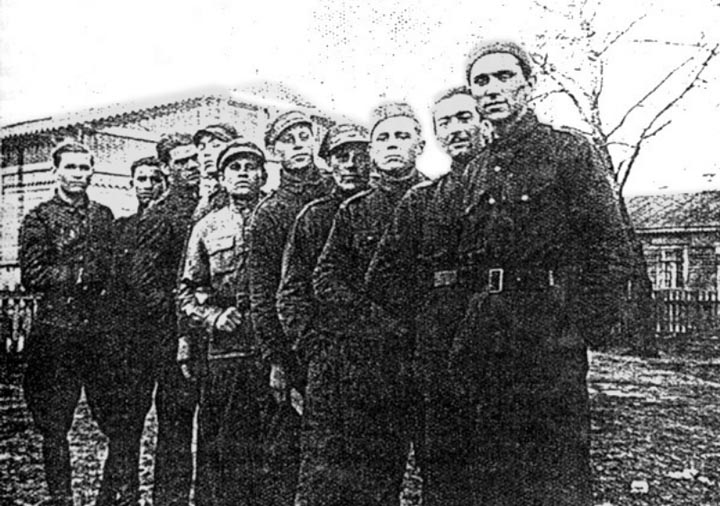 Members of the Polish Naliboki Self-Defense between 1942 and 1943. This unit was formed to defend the residents of this Polish town from frequent looting by Soviet partisans (Photo: Kresy24.pl / Wikimedia).

In this area the war was practically fought on three sides. A unit of the Armia Krajowa (AK, Home Army), the main Polish resistance organization, which was loyal to the Polish government in exile, was active in the Naliboki forests. This unit, the Stołpeckie Grouping, was practically isolated from the rest of the AK units in the Nowogródek District, since it not only had clashes with the Germans, but also with the Soviet partisans, who had a strong presence in the area.

Soviet partisans often looted Naliboki farmers. This was a problem for the AK soldiers, since they fought only against the Germans, because although they did not feel the slightest sympathy for the USSR, it was an ally of their allies. The local AK group tried to negotiate with the Soviet partisans to end the looting of Naliboki residents, but to no avail. Given this, the neighbors formed a self-defense group to protect themselves from the attacks of the red partisans. The Soviet partisans demanded that this self-defense group put itself under their orders, but the Poles refused. However, both reached an agreement that they would not attack each other. An agreement that the Soviets would soon violate. 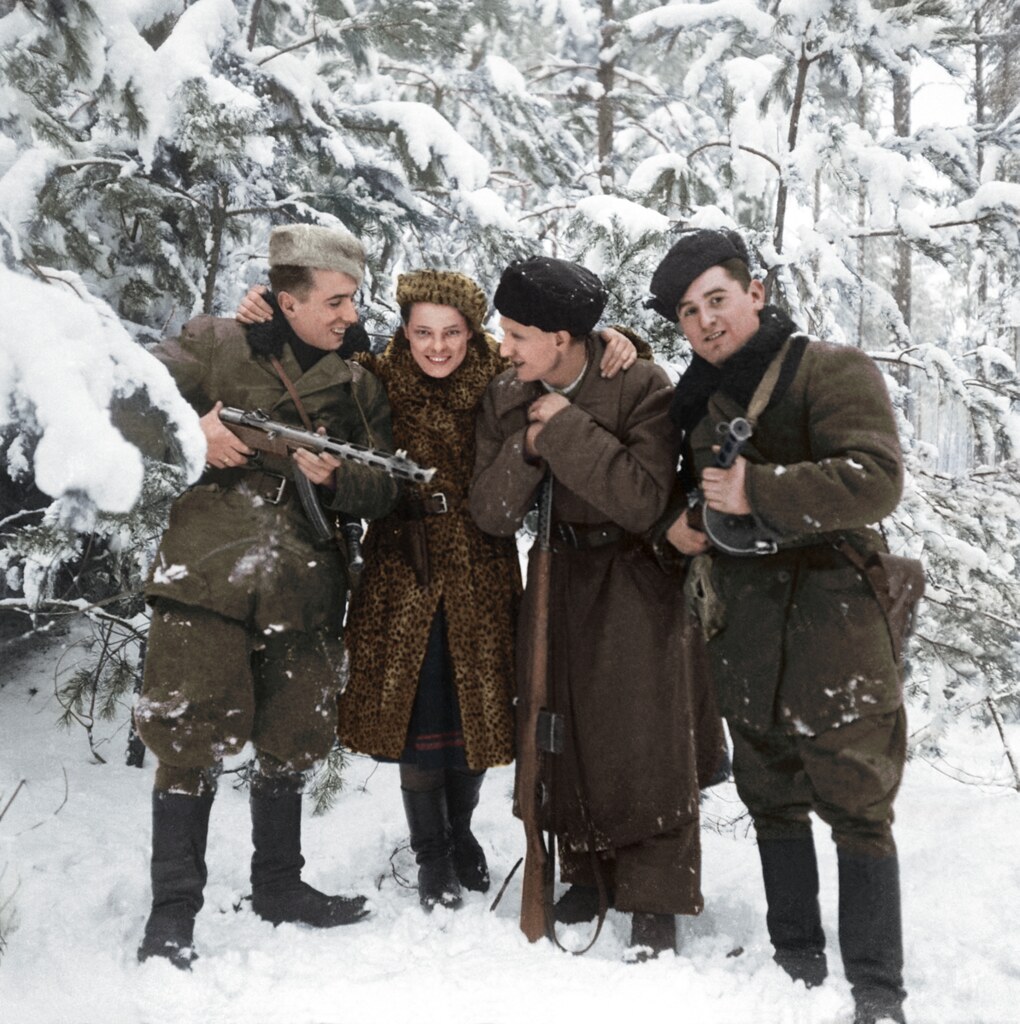 The Naliboki Massacre: a Soviet attack on the Polish civilian population

On the night of May 8-9, 1943, the "Stalin" Brigade of Soviet partisans, accompanied by members of other Bolshevik units - the "Dzerzhinsky", the "Bolshevik" and the "Suvorov" - attacked Naliboki (some sources indicate the participation of Jewish partisans in the attack, but this version has not been confirmed, according to the Institute of National Remembrance of Poland, IPN). The target of the attackers was not the Germans. The excuse was to liquidate the self-defense group created by the neighbors. In reality, the Soviets were looking for the AK members, who were caught by surprise by the attack, as they had a non-aggression pact with the Soviet partisans.

Soviet partisans dragged all of Naliboki's men out of their homes and executed them one by one or in groups. Three women, a ten-year-old boy and several adolescents were also killed in the massacre. In addition, the Soviets burned down the churches, the school, the fire station, the post office and many of the farms, after looting them. The Soviets cynically described this type of action as "pacification", despite the fact that most of those killed were civilians. 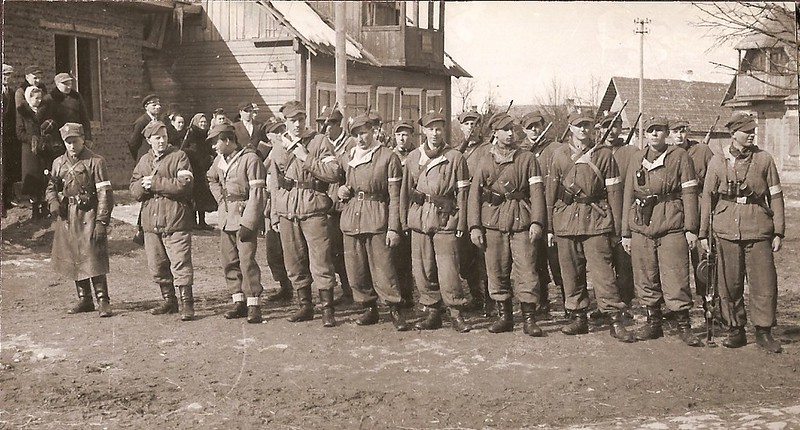 The 'Bosego' Platoon of the 3rd Vilna Brigade of the Armia Krajowa (AK) in 1944. The AK was the main organization of the Polish resistance against Germany. It had a unit in Naliboki, the Stołpeckie Agrupation (Photo: Kerim44 / Wikimedia).

After the massacre, the Soviets looted and burned the Polish town

After the massacre and looting of Naliboki, the commander of the "Stalin" Brigade informed the NKVD, the Soviet equivalent of the Gestapo, of the murder of 250 residents of the town (recent investigations have reduced the number of victims to 128), in addition to the theft of 100 cows and 78 horses. Furthermore, to justify the attack, the Soviet commander claimed in his report that he had destroyed a German garrison, despite the fact that there were no Germans in Naliboki, not even a Belarusian police station established by the Third Reich.

The 1943 massacre was not the last tragedy to befall the people of Naliboki. A few months later, on August 6, 1943, the Germans deported the inhabitants who had survived the Soviet attack, sending them to Germany to be used as slave labor. 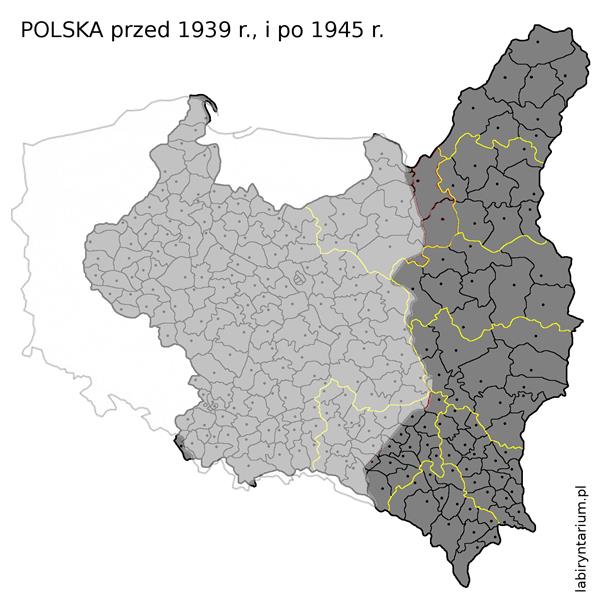 The Kresy strip (on the right, in dark grey) is the part of Poland that was invaded and annexed by the USSR in 1939. In 1945, the Soviets took this part of Poland. In compensation, former eastern German territories (in white) were given to Poland. The part in light gray is what Poland kept from its former Second Republic territories. (Image: Labiryntarium.pl).

Pursuant to the agreement signed with the Western allies at the Yalta Conference, to which the Polish government in exile was not invited, after the war the USSR kept the entire so-called Kresy strip, the eastern part of Poland. which was invaded by the Red Army in September 1939. Most of the Polish inhabitants of that strip were expelled from their homeland, being resettled in the former eastern strip of Germany, which became part of Poland as compensation. After the war there were still just over half a million Poles in Belarus. Today the Polish minority in that country does not reach 300,000 people. They have their largest community in the city of Grodno, and suffer the misfortune of continuing to live under a dictatorship: that of the communist Aleksandr Lukashenko.