Both countries keep their embassies in Ukraine while others withdraw them

Lesson of Poland and Lithuania to the EU: their presidents travel to Kiev to support Ukraine

Following the order for the invasion of Ukraine issued by Vladimir Putin on Monday, Poland and Lithuania today taught the European Union a great lesson. 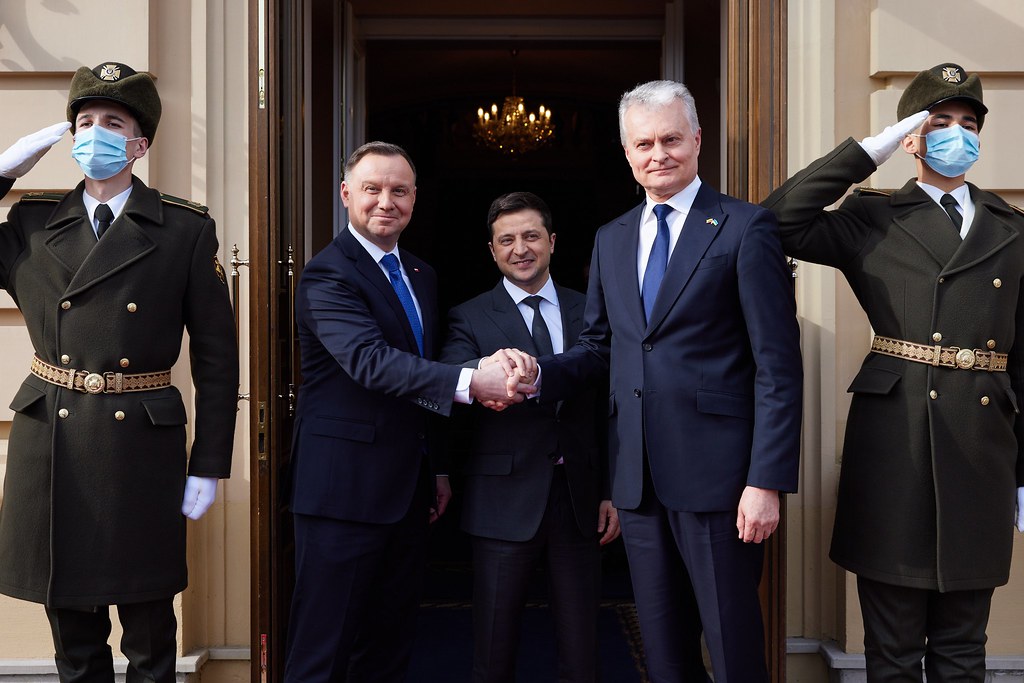 According to the website of the Presidency of Ukraine, the three leaders have spoken about the Russian aggression and its effects: "We have discussed the consequences of Russia's actions for European and regional security. We are united in the fact that the future of European security is now being decided at home in Ukraine. We are coordinating our efforts to counter Russian aggression and de-escalate the conflict," Zelensky said.

Zelensky appreciates his "personal presence" at this difficult time: "it is very important and valuable"

The President of Ukraine stressed that "the personal presence in Kiev at this difficult time of the true friends of Ukraine, Andrzej Duda and Gitanas Nausėda, is very important and valuable." The Ukrainian president noted that Poland and Lithuania support Ukraine not only in word but also in deed and they make an important contribution to increasing the country's defense capabilities: "The protective helmets, ammunition and portable anti-aircraft missile systems delivered to our forces security and defense are all the help that the Ukrainian army needs at the moment," Zelensky commented. Both Poland and Lithuania, Latvia and Estonia have sent weapons to Ukraine before the Russian military mobilization that this Monday has given way to the invasion.

In addition, the President of Ukraine has expressed his gratitude to the Presidents of Poland and Lithuania for the fact that the diplomats of both countries remain in Kiev: "it is an important sign", Zelensky stated. This decision by Poland and Lithuania contrasts with the withdrawal of diplomatic personnel from other allied countries, clearing the way for the Russian invasion and leaving the invaded country alone when it most needs its support.

So far, that decision has already been taken, in whole or in part, by the United States, the United Kingdom, Australia, Canada, Germany, the European Union, the OSCE and the NATO. Likewise, Israel has moved its embassy from Kiev to Lviv, but without removing it from Ukraine. The day before yesterday, coinciding with the start of the invasion, Russia also withdrew its diplomatic personnel from Kiev and Odessa.

At the moment, Spain is keeping its embassy open in Kiev and has sent nine members of the Special Operations Group (GEO) to reinforce its security, as it usually does in diplomatic delegations in conflict zones.

Duda and Nausėda's trip to Ukraine this Wednesday is a great lesson from Poland and Lithuania to the diplomacy of the European Union and other allied countries, about how to act when a tyrant like Putin orders the invasion of a sovereign and independent country, like has already done with Ukraine and Georgia. In fact, this trip has a clear precedent in the meeting of support for Georgia carried out in Tbilisi on August 12, 2008 to respond to the Russian invasion of that country, which began on the 1st of that month. The presidents of Poland, Ukraine, Lithuania, Latvia and Estonia attended that event, in which they were accompanied by the Georgian president Mikheil Saakashvili.