The little-known story of the Battle of the Falklands of June 10, 1770

As in Spain with Gibraltar, the Falklands Islands are a British colony that is still a source of dispute between the United Kingdom and Argentina.

A dispute dating back to the discovery of the Falklands

The dispute over these islands dates back to their discovery at the beginning of the 16th century. Spain, France, England and Portugal took credit for its discovery, without it being fully resolved until now who received the merit. The fact is that for centuries it was considered that, by virtue of the Treaty of Tordesillas of 1494, those territories corresponded to Spain. However, the first to install a colony there – that of Port St. Louis – was the French explorer and soldier Louis Antoine de Bougainville in 1763. However, being in the area of Spanish influence, France finally sold the islands to Spain in 1766. 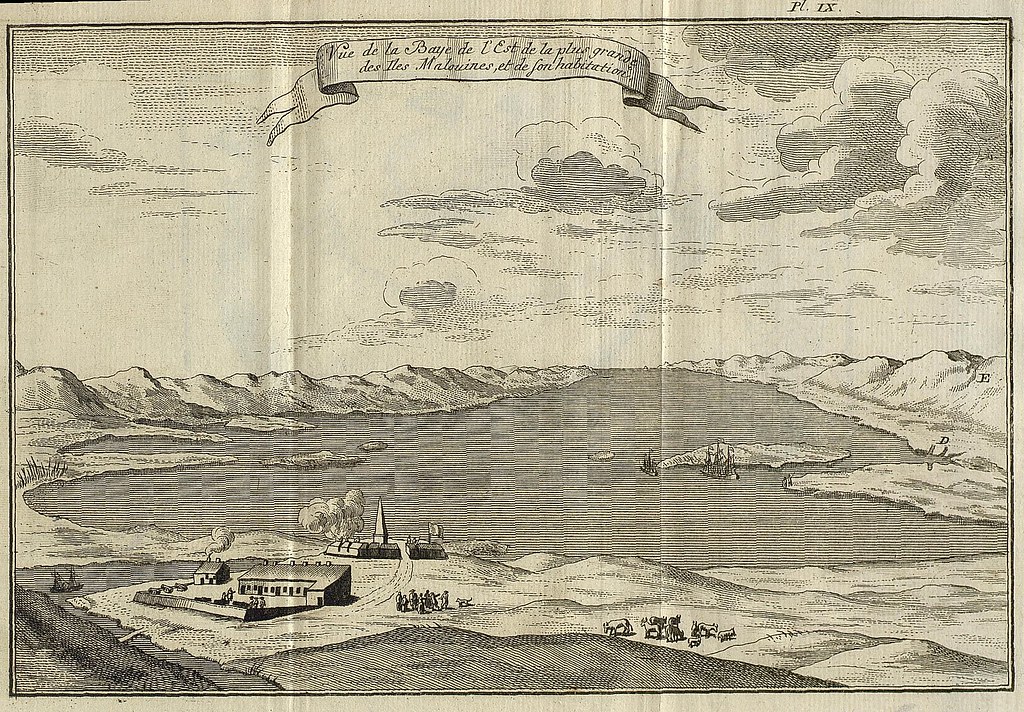 The first British attempts to take over the archipelago

Already in 1749 the British had organized a false scientific expedition with the purpose of establishing a naval base on the islands, an attempt that Spain stopped short. The Spanish occupation of the islands began in 1767, renaming Port St. Louis as Puerto Soledad, and its first governor being Felipe Ruiz Puente, a military man from Burgos. The islands were dependent on the government of the Río de la Plata, a Spanish territory that in 1776 became the Viceroyalty of the Río de la Plata, which included what is now Argentina, Bolivia, Paraguay and Uruguay.

Aware of the deal between France and Spain, in 1766 the British had secretly and illegally settled in Port Egmont, on the island of Trinidad, to the northwest of the archipelago. In 1768, orders were issued from Madrid not to allow British settlements on the islands. In November 1769 a Spanish ship ran into a British ship from Port Egmont, and the Spaniards found the location of the secret British colony later that year. Far from wanting to leave, the British assured that these islands belonged to their King and demanded that the Spanish evict them from Puerto Soledad. 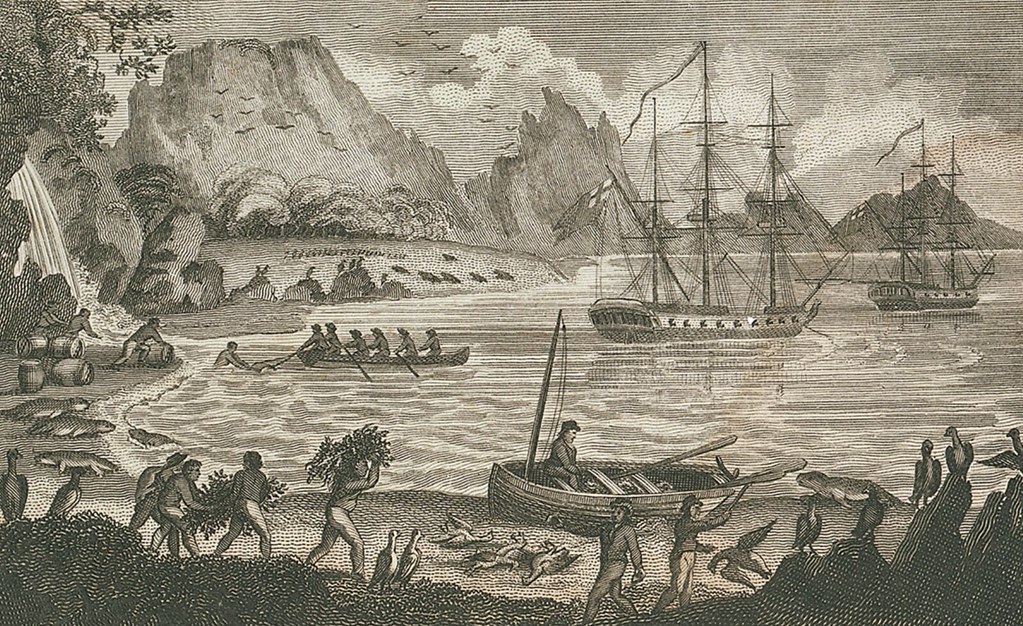 An engraving from the time showing two British ships, the Tamer and the Dolphin, anchored off Port Egmont in the 18th century (Source: Royal Museum Greenwich).

Madariaga’s expedition to expel the British

That gesture of arrogance on the part of the British would have a response shortly after, in February 1770, when three Spanish ships arrived at Port Egmont to assert the legitimate titles of Spanish sovereignty over the islands. Then the thing did not go beyond an exchange of threats that ended with the return of the Spanish flotilla, under the command of Fernando de Rubalcava, to Buenos Aires. On May 11, a new Spanish flotilla set out from Montevideo to expel the British from the Falklands, this time with five ships – totaling 108 cannons – and 1,500 soldiers and sailors. At its head was an experienced Basque sailor, Captain Juan Ignacio de Madariaga Arostegui.

Madariaga’s journey started badly, because a storm separated the flagship from the rest of the flotilla, so his frigate, “Industria”, went ahead of the rest and arrived alone at Port Egmont on June 4, 1770, which must have emboldened the British, as they threatened to shoot him if he did not withdraw. To buy time, the Basque sailor sent an emissary with gifts for the British colony, with the secret mission of inspecting its defenses. He was thus able to learn that the British only had one frigate with 20 guns and 4 more guns on land. After stalling for time, on June 6 the rest of the Spanish flotilla arrived. 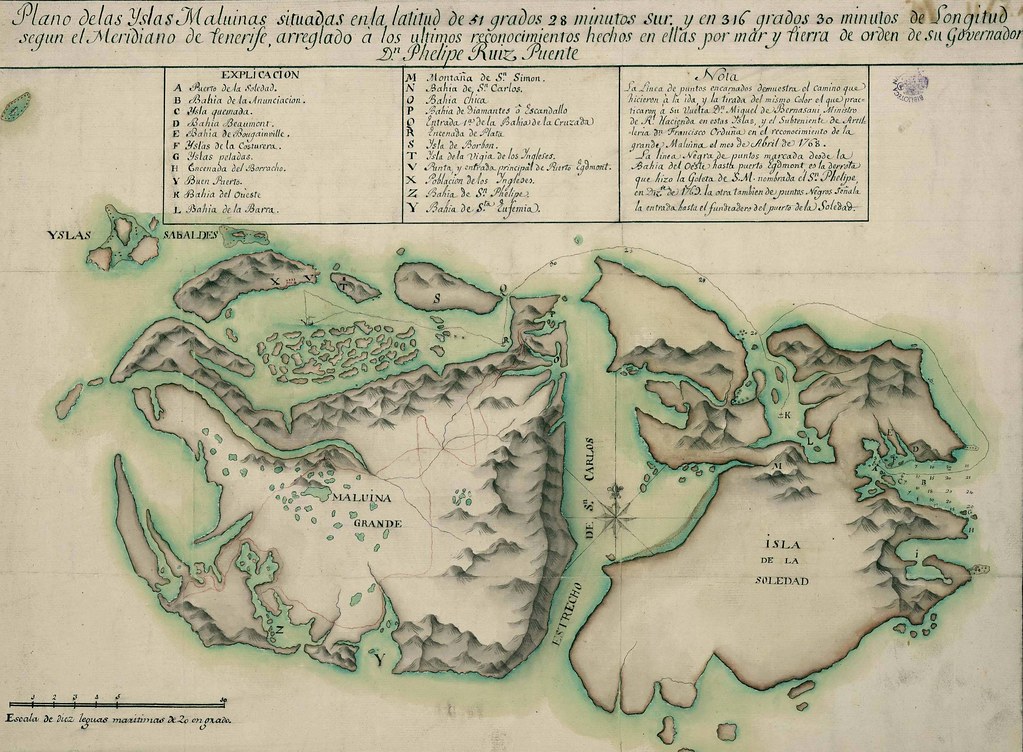 A map of the Malvinas made by Felipe Ruiz Puente in 1768. Click on the image to see it enlarged (Source: Biblioteca Nacional de España / Wikimedia).

After waiting a few days for the weather to improve to carry out a landing, on June 9 Madariaga issued an ultimatum to the British ordering them to leave the islands. He did so with a polite message, promising to treat them with “consideration and care” if they peacefully agreed to his demand. The landing began on June 10, accompanied by a naval bombardment that was painfully answered by the British guns defending Port Egmont from land. The British resistance was short-lived: that same day the white flag was raised, and a total of 156 men were taken prisoner. Both they and the settlers were imprisoned for almost three weeks, after which they were allowed to leave the place aboard the British ship HMS Favourite. 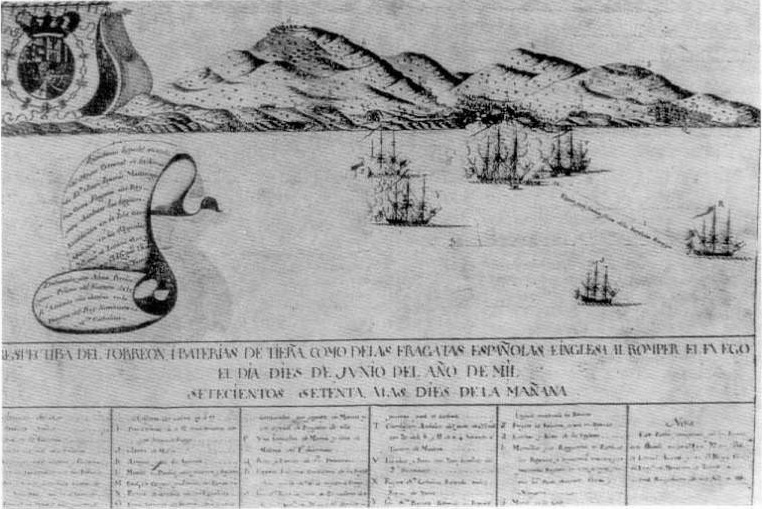 Vintage engraving of the Battle of the Falklands on June 10, 1770 (Source: Auñamendi Eusko Entziklopedia / Wikimedia).

It was a very clean battle. There were no deaths and the only one injured was a Spaniard, Lieutenant Colonel Vicente de Reyna Vázquez, of the Royal Army and a native of Malaga. Port Egmont was renamed Puerto de la Cruzada (Port of the Crusade). That action earned Madariaga promotion to the rank of brigadier, which he would not hold for long, since he died on March 30, 1771.

From British humiliation to Spanish capitulation

The news of the humiliation of Port Egmont infuriated the British, who demanded that the Spanish immediately abandon those islands. Spain answered first with evasions and then with excuses. What happened was about to provoke a war between the two Nations, which did not break out because the embarrassing decision was finally made from Madrid to allow the reestablishment of the British colony of Port Egmont. King Charles III even signed a declaration rejecting Madariaga’s incursion. 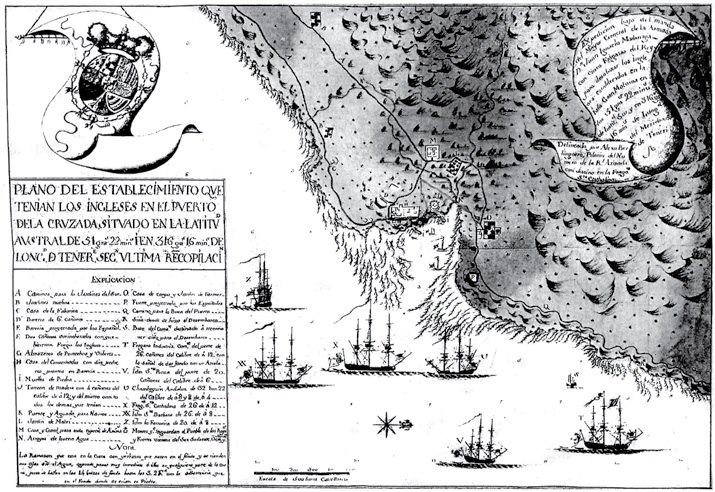 Vintage engraving of the Battle of the Falklands between the Spanish and British forces on June 10, 1770 (Source: Museo Malvinas e Islas del Atlántico Sur).

In April 1772, the British returned to Port Egmont and the Spanish garrison abandoned the place. The Spaniards and British shared the Malvinas for two years, until the United Kingdom abandoned them on May 22, 1774, but not before leaving a plaque there claiming sovereignty over the entire archipelago. On January 24, 1776, the Spanish ship “San Francisco de Paula”, captained by Juan Pascual Callejas, arrived at Puerto Egmont, finding the abandoned British settlement and the plate in question, which was taken to Buenos Aires. In 1780 Callejas returned to Port Egmont and destroyed what was left of the British settlement. Spain and the United Kingdom had been at war since 1779, due to Spanish support for the United States in its War of Independence. 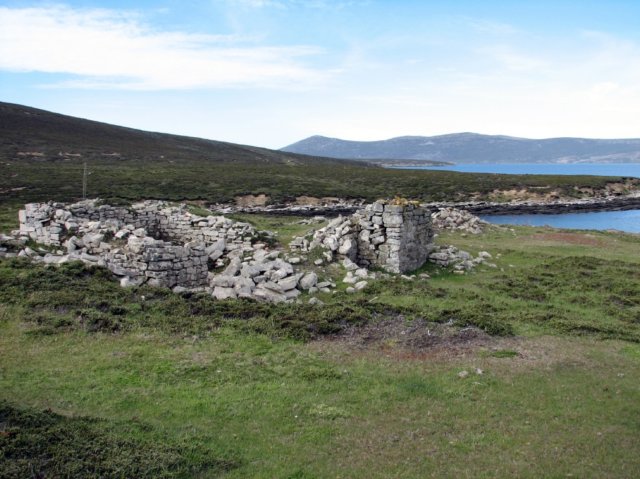 The remains of the British settlement of Crusade Port, formerly called Port Egmont. It was definitively abandoned by the British in 1774, and destroyed by the Spanish in 1780 (Source: Wallcreeper.co.uk).

Argentine and British rule over the Malvinas

The Spanish garrison of Puerto Soledad continued in place until well into the 19th century. In 1811, in the midst of the Napoleonic invasion, Spain abandoned the Malvinas and the garrison moved to Montevideo. The Cortes of Cádiz confirmed the abandonment of the islands in 1812, but by then there was no longer anyone populating them. After the independence of the former Spanish viceroyalty, in 1820 Argentina took possession of the islands. The Spanish presence on the islands lasted 44 years, but the Argentine presence was shorter: in 1833 the British took over the archipelago. They remained there until April 1982, when Argentina launched a military landing on the islands, taking control of them. In the following months, hundreds of Argentine and British soldiers died in the so-called Falklands War, which ended in a UK victory in June of that year. Almost 40 years later, the islands are still a dagger stuck in the heart of Argentina, which still claims the territory.

The data that indicates a possible sabotage of Russia against the Nord Stream gas pipelines
29·9·2022 · 19:28

The mass deportation of Polish Jews to Siberia: an almost forgotten communist crime
29·9·2022 · 7:01

Zelensky’s congratulatory message to Giorgia Meloni and her great response
28·9·2022 · 7:30