Small countries like Luxembourg and Estonia have contributed more than Spain

The coalition of socialists and communists that governs in Spain seems to have no special interest in helping Ukraine defend itself against Russian aggression.

Sánchez promised Ukraine "all the help that is in our hands"

On April 21, during his visit to kyiv, the President of the Spanish Government Pedro Sánchez affirmed his "full support for Ukraine" and promised "all the help that is in our hands". But as is often said, there is a long way from words to deeds, and in this case good words have not been accompanied by military aid in keeping with the weight that Spain has in the European Union and NATO. In fact, Spain is one of the few large European countries that has not sent heavy weapons to Ukraine, despite recent information about the possible shipment of Leopard 2A4 battle tanks and Aspide missiles, a shipment that has not even been confirmed officially and that in the case of armored vehicles it could be postponed for months.

The graphs that reveal the scant aid from the Spanish government

Economic, humanitarian and military aid to Ukraine due to the Russian invasion is the subject of regular analysis by the Kiel Institute for the World Economy (IfW), an institute based in Germany. This organization is publishing the so-called Ukraine Support Tracker, which covers 37 countries, including members of the European Union, Australia, South Korea, Turkey, Norway, New Zealand and Switzerland.

The latest Ukraine Support Tracker report was published this Thursday, June 16 (see PDF), and includes aid sent to Ukraine from January 24 to June 7. On page 20 of the report there is the following graph that shows the economic aid of the different governments in terms of GDP: Spain is behind countries such as Luxembourg and Malta. 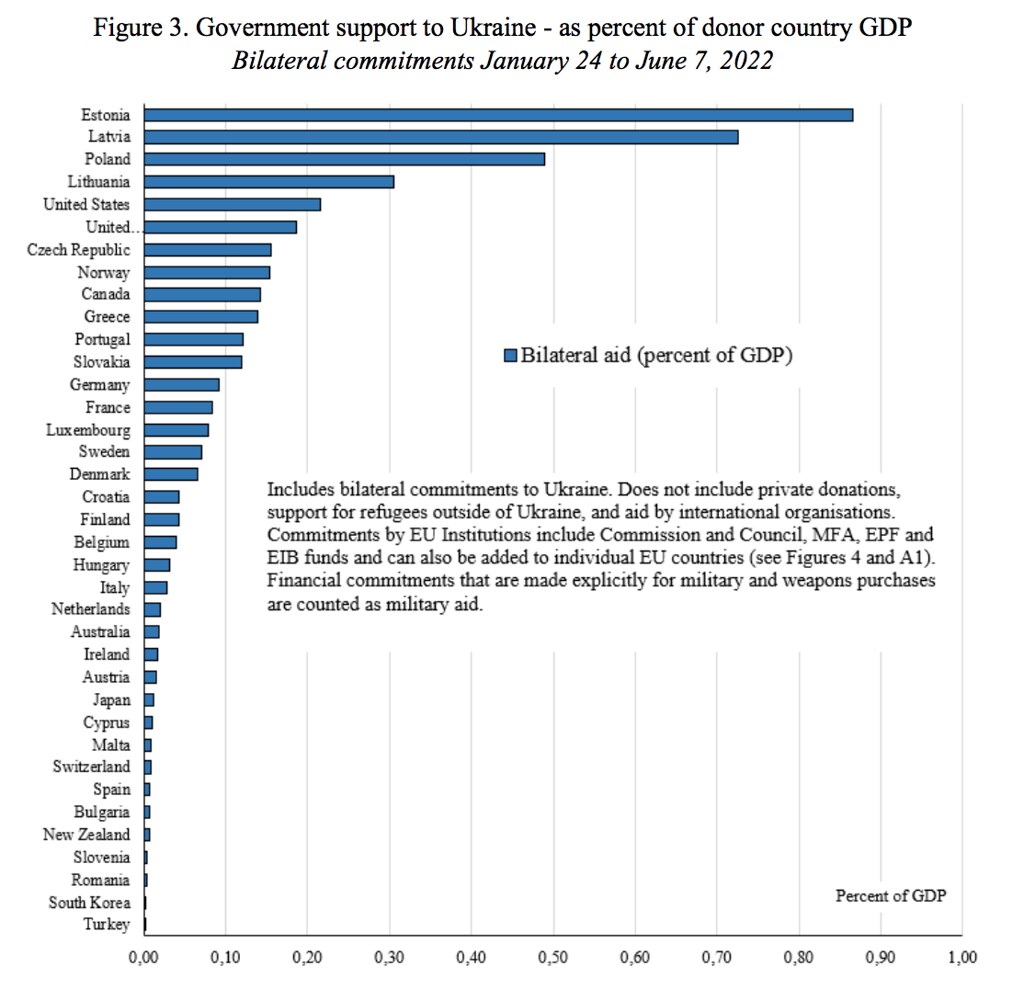 On page 23 of the report, this graph appears with military aid by country, measured in billions of euros and including financial aid. The table shows the 20 largest donors of the 37 examined. Small countries like Lithuania, Estonia, Latvia and Luxembourg appear. Spain does not appear: 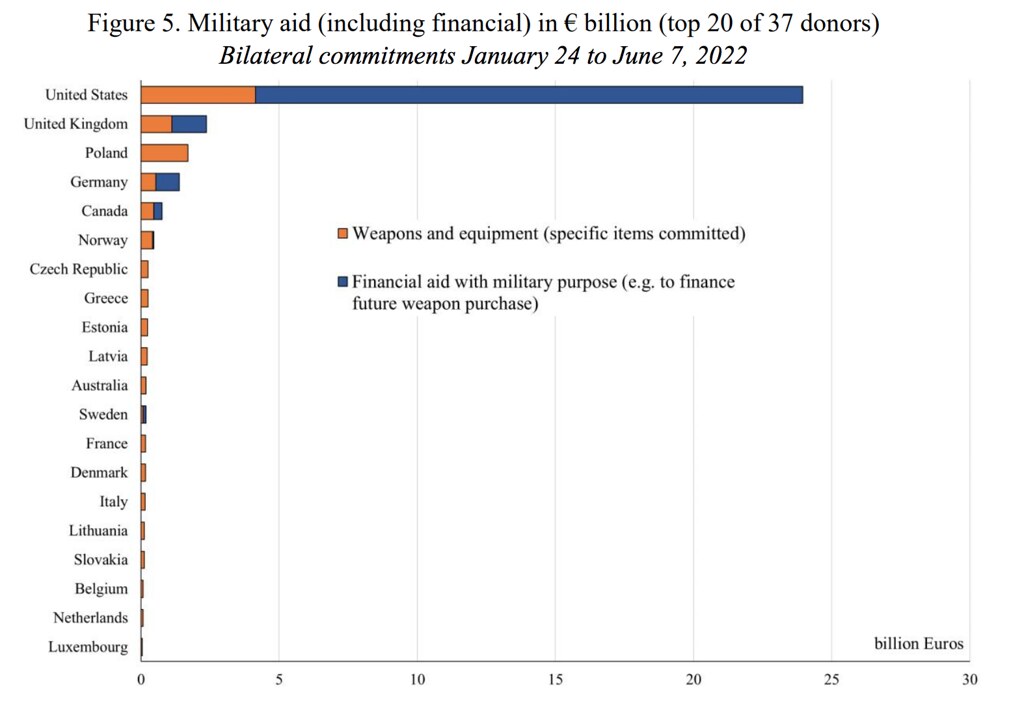 On page 32 of the report is this graph showing military aid committed and sent, again highlighting the top 20 donors out of a list of 37 countries. The aid from Poland, which is the most compliant country and whose volume of aid sent is already close to that of the US, is striking. Small countries such as Estonia and Latvia rank 6th and 7th, respectively. Luxembourg appears on the list, but not Spain: 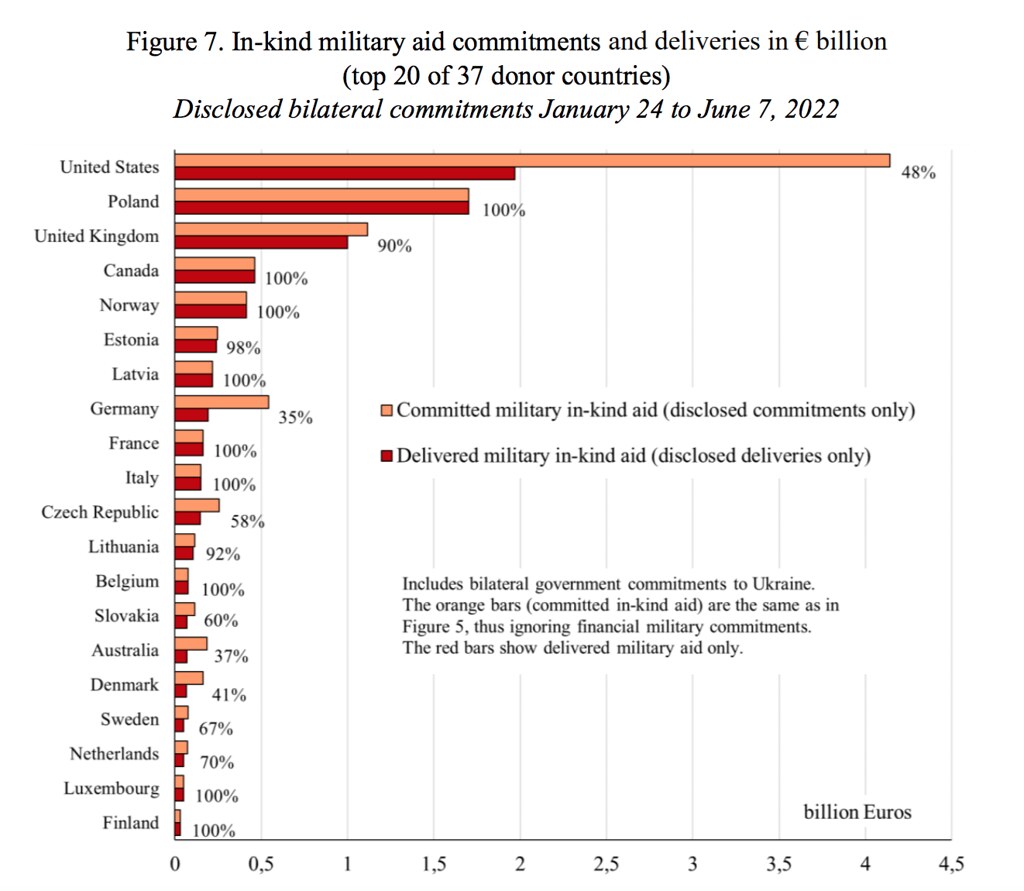 The report addresses the case of Spain on pages 9 and 10, with the following paragraph:

"Spain’s government initially shared information on military shipments but stopped doing so. Specifically, on March 2, it announced that it will be sending 1,370 anti-tank grenade launchers as well as 700,000 rifles, plus light machine guns and ammunition. On March 11, the government then announced an additional shipment of weapons for which the Spanish Foreign Minister Jose Manuel Albares refused to specify any detail. In this version of the database, we could however track three additional packages of military aid. The first, a minor one, was announced on March 29 and estimated to be worth €644,000. The second and third packages were committed on April 21 and June 5 and could be valued at €21 million and €12 million, respectively, based on information from news media."

On the supposed shipment of June 5 sheds more light on page 52 of the report: it is about the famous Leopard 2A4. The report indicates the possible shipment of 10 main battle tanks, but warns that they have not yet been sent. Furthermore, the text speaks of 20 VAMTACs delivered to Ukraine on April 21. It is about the trip of the ship "Ysabel" to Poland announced by Sánchez during his visit to kyiv on April 21 (hence the date that appears in the report), but it turns out that all the Spanish military vehicles returned to the "Ysabel" after delivering ammunition and clothing at the border. Thus, Spain did not deliver any VAMTAC. In other words, the report considers that aid was sent that did not even reach Ukraine, so that Spain would still be worse off in the tables if we stick to the facts.

Photo: La Moncloa. Pedro Sánchez with Volodímir Zelenski during the visit of the President of the Government of Spain to Ukraine on April 21, 2022.