A Chinese urban explorer has entered this ship, located in Nantong

Minsk: an abandoned Soviet aircraft carrier with a plane, torpedoes and missiles inside

In the always interesting world of abandoned warships, the biggest and most spectacular thing you can visit is an aircraft carrier.

Aircraft carriers are not abundant ships, and few are abandoned or awaiting scrapping. One of these huge ships can be seen in China: the former Soviet aircraft carrier "Minsk", the second of four kyiv-class ships built by the USSR. They were certainly atypical aircraft carriers. In fact, the Soviet Navy considered them to be heavy aircraft cruisers, since their bow, packed with missile launchers of various types, is more similar to a cruiser.

The "Minsk" was laid down in December 1972 and launched in September 1975, entering service in September 1978. It did not last long in service. Due to the disappearance of the USSR and the crisis suffered by the Russian Federation in its first years of life, she was withdrawn from service in June 1993, without having reached 15 years of service.

In 1995 it was sold to be scrapped, but a group of Chinese businessmen dedicated to video games bought it for the modest figure of 4.3 million dollars, in order to turn it into the center of a park thematic. However, the purchasing company went bankrupt in 2006 and the ship ended up being sold again to make another theme park. So far, that theme park has yet to open. The initial delays in the project were compounded by the pandemic, so that the "Minsk" is currently in a state of abandonment, located in an artificial lagoon in Nantong, on the Yangtze River.

A year ago, the channel 404 Abandoned published a video of a Chinese urban explorer entering "Minsk". The explorer doesn't speak many words, but if you want to understand how little he says, I suggest you activate the automatic subtitles in the bottom bar of the player:

Let's see some screenshots of the video. Let's start with a mannequin of a Soviet sailor. If I walk into an abandoned ship and find this, I run. 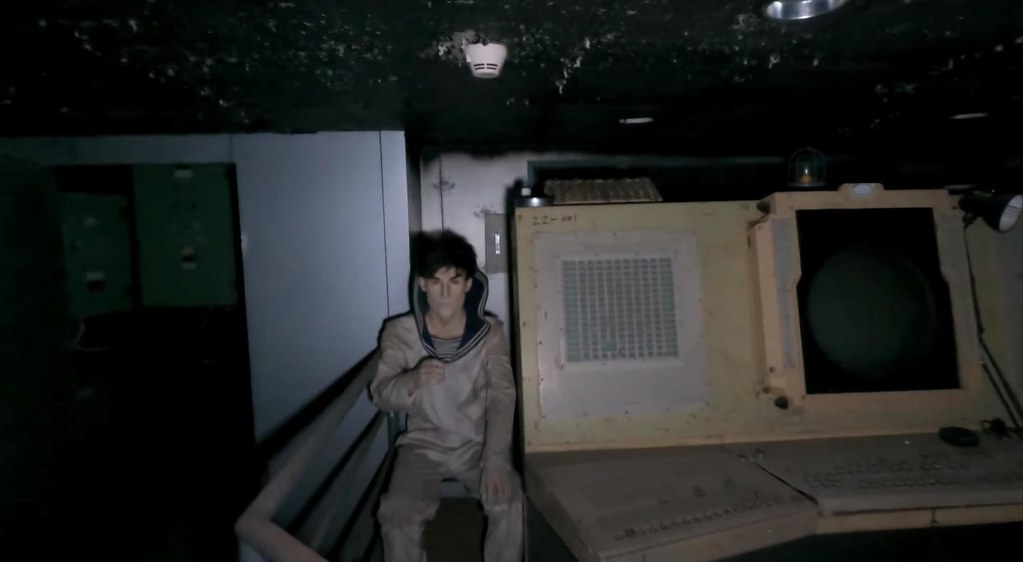 An EST-53-65K torpedo inside the carrier. And it's not a replica. 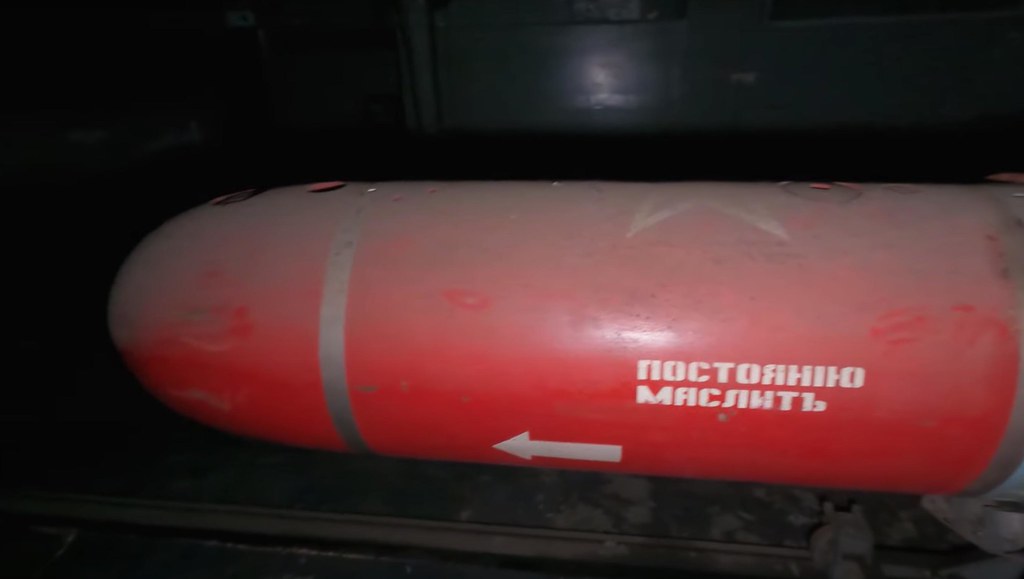 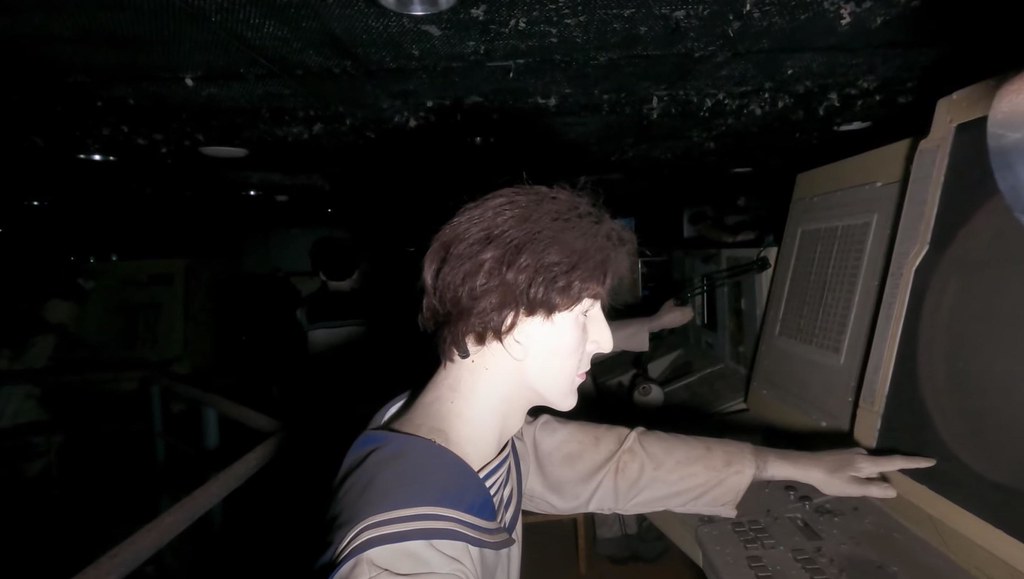 A Mikoyan-Gurevich MiG-27 attack aircraft (a model not used by the Soviet Navy) in the ship's hangars, along with a dummy in pilot gear. 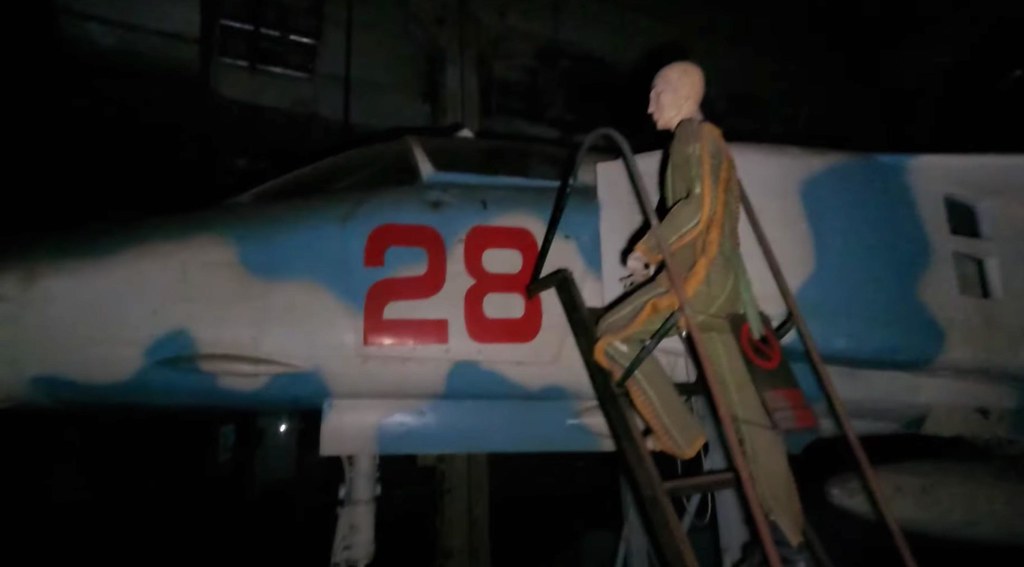 An SS-N-2 anti-ship missile inside the aircraft carrier. It is also not a replica. 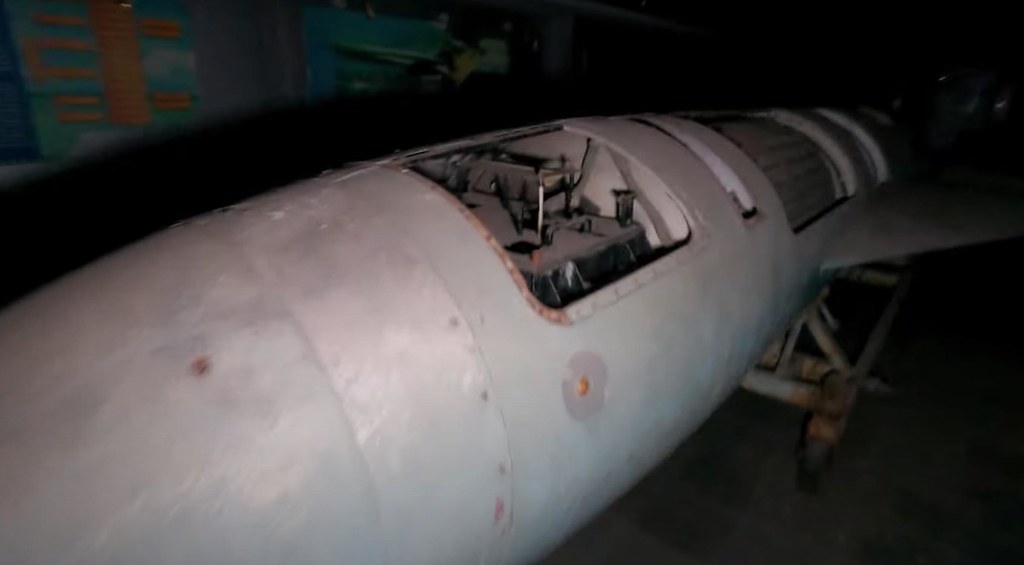 One of the crew cabins, with another dummy gathering dust. 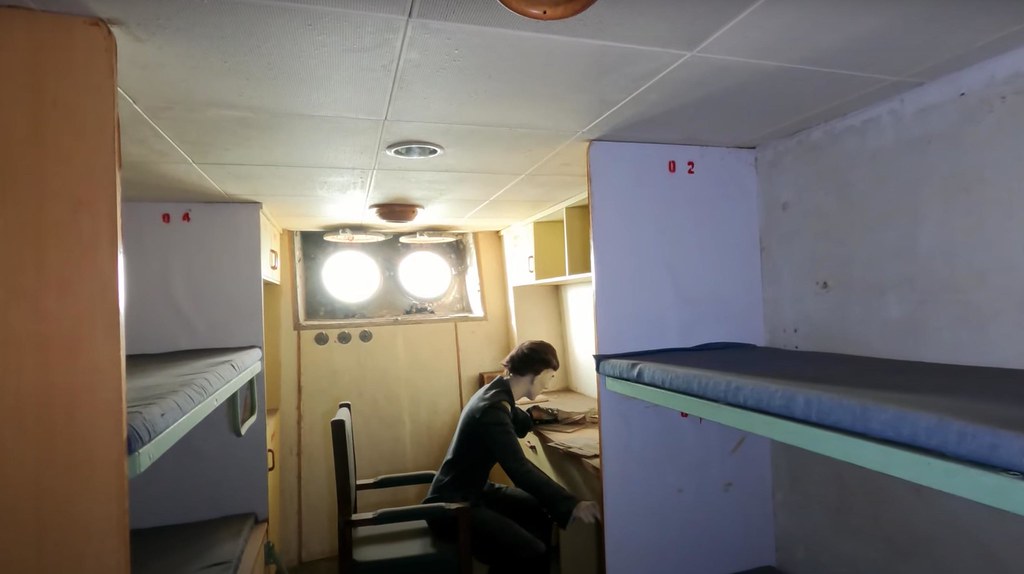 The ship's bridge, in a sorry state. 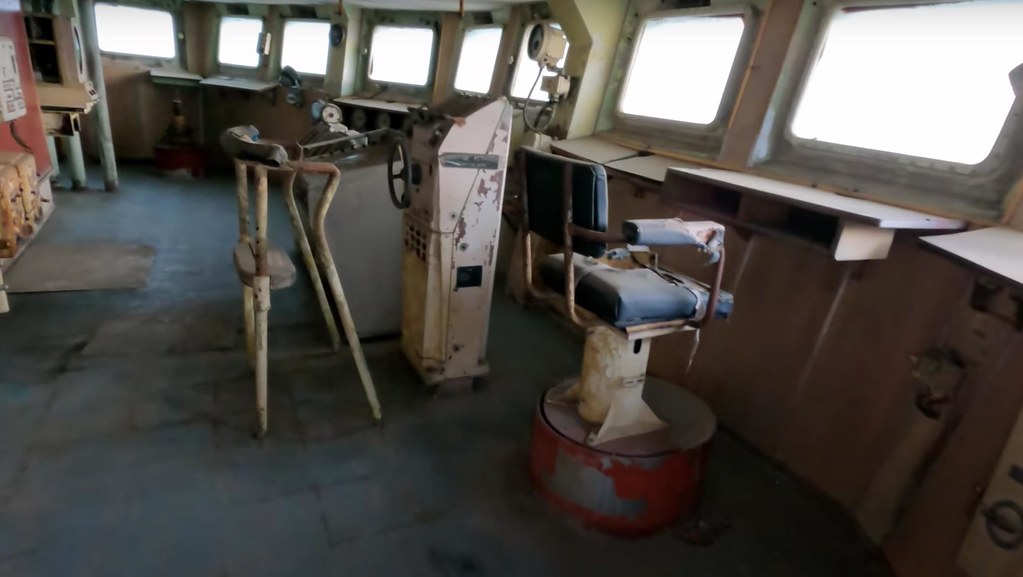 The ship's bow missile launchers. The largest are SS-N-12 Sandbox supersonic surface-to-surface cruise missiles. Ahead of them is a dual M-11 Shtorm surface-to-air missile launcher. And in front of these is a 12 RBU-6000 anti-submarine rocket launcher. 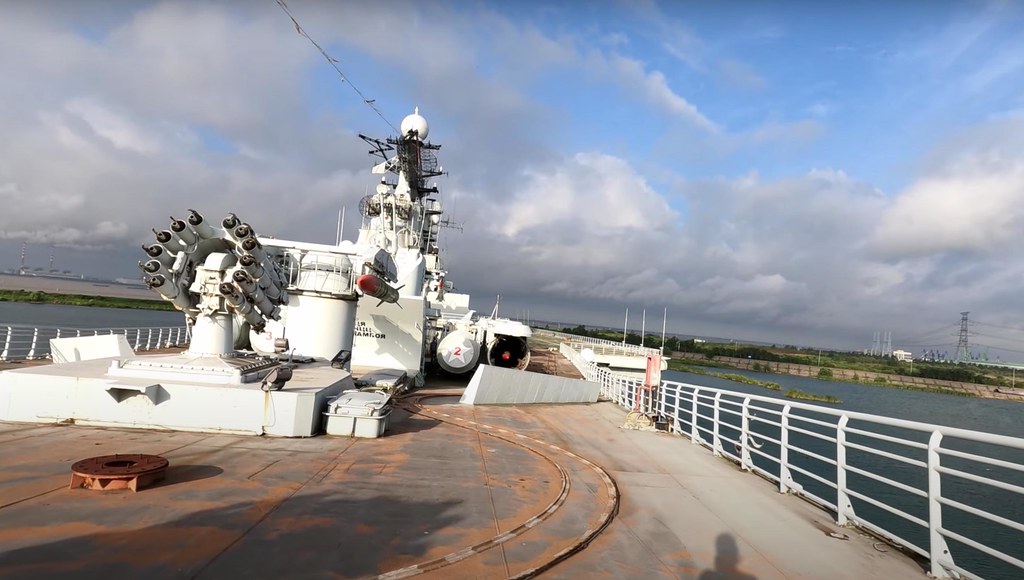 An SS-N-12 Sandbox missile and a launcher with two M-11 Shtorm surface-to-air missiles. They don't look like replicas either, but they may have had their warheads removed. 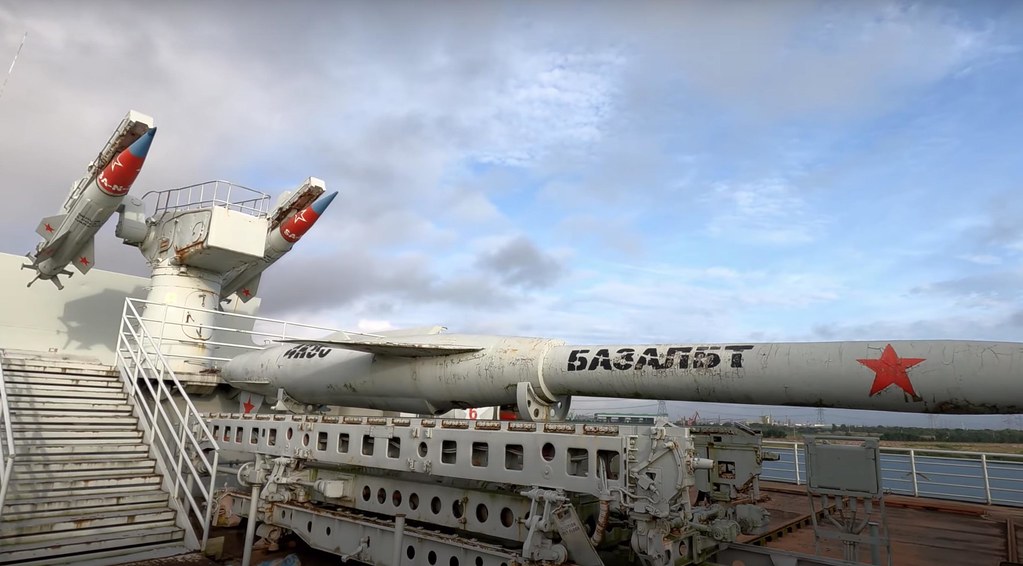 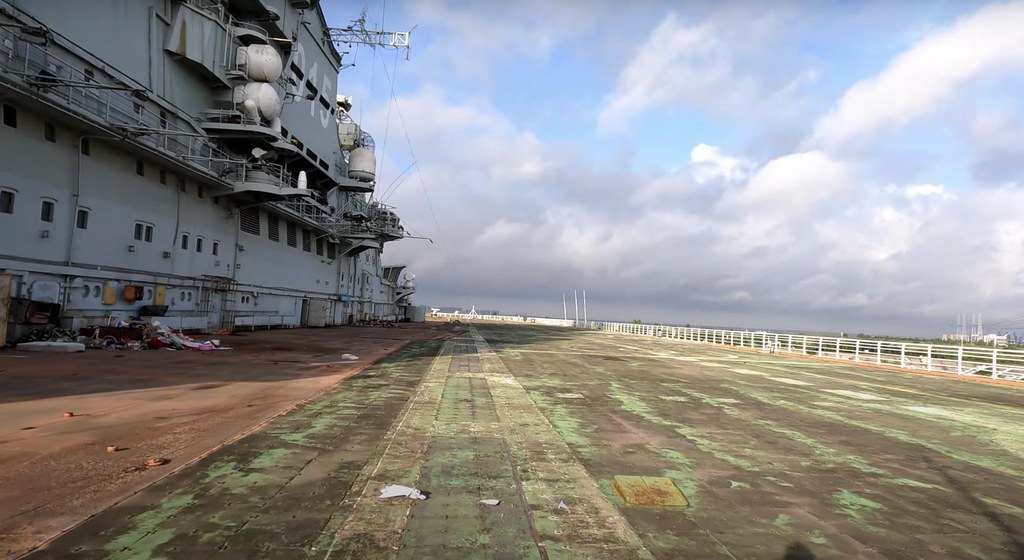