EMBT: this is the European main battle tank that could replace the Spanish Leopardo 2E

It seemed that the star of the tanks was diminishing due to asymmetric warfare, but the Russian invasion of Ukraine has once again demonstrated its importance.

EMBT: a fusion of the German Leopard 2 and the French Leclerc

In this scenario, new models are being presented that could replace the generation of battle tanks that entered service in the 1980s (M1 Abrams, Leopard 2, AMX-56 Leclerc, Challenger and Merkava). While the United States, the United Kingdom and Israel continue to choose to improve their respective tanks with the most recent versions of the Abrams, the Challenger 3 and the Merkava Mark 4 Barak, Germany and France seem to opt for new solutions to replace their already veteran tanks. In June we saw the presentation of the German Panther KF51, and now comes a project that has been talked about for years: the EMBT (European Main Battle Tank), a project also known as the Main Ground Combat System (MGCS).

Germany and France started talking about this project in 2012 to replace the Leopard 2 and the Leclerc. The first conceptual designs appeared in 2016, in what roughly looked like a main battle tank that took advantage of the barge of the Leopard 2 and the turret of the Leclerc, modernizing them. In fact, some dubbed the new project "Leo-clerc". Three other countries have become interested in the project: Italy (to replace their Ariete tanks), Poland (which was looking for a replacement for its already old T-72 and PT-91, but has finally opted for the South Korean K2 Panther), Belgium, Netherlands and Spain.

The possible replacement for the future Spanish Leopard 2E Plus

In 2019, in a document about its "Fuerza 35" project, the Spanish Army showed its interest in this project (see PDF, pages 66 and 67) to replace its Leopardo 2E, the national version of the German Leopard 2A6, produced between 2003 and 2008. The forecast is that the EMBT will be active in 2035, at which time it will be necessary to start thinking about a substitute for the current Spanish battle tanks. Until then, the forecast is to modernize the current vehicles to the Leopard 2E Plus version, with improvements in fire control systems, optronics and ammunition.

This is the EMBT presented by Nexter Systems

This Monday, Nexter Systems, the French partner of the EMBT consortium (also made up of the German companies Krauss-Maffei Wegmann and Rheinmetall) presented in a video the first prototype of the new battle tank, already shown in June at the Eurosatory 2022 fair:

As progress has been made since the project was launched, the barge looks like an improved version of the Leopard 2A7, so it is also very similar to the Panther KF51. Likewise, the turret is reminiscent of that of the Leclerc and the K2 Panther, with a fairly low profile. 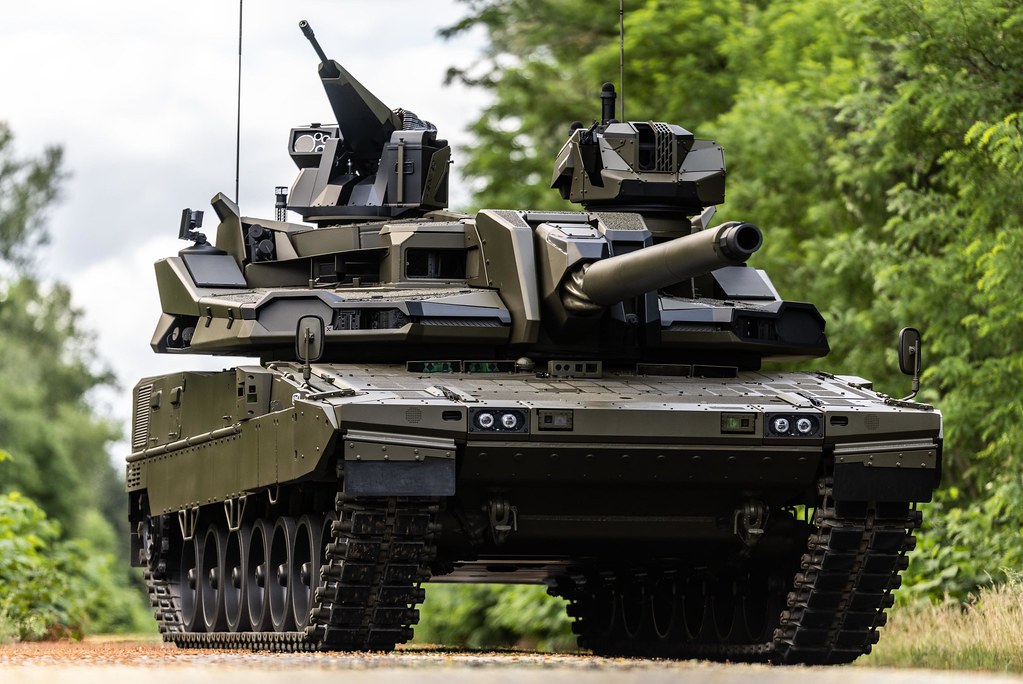 Nexter has already indicated that the tank will have four crew members, which in judging from the pictures they will be seated in two positions in the turret and two in the front of the barge, just like the Panther KF51. On the right side of the barge will be the driver and on his left the systems operator, who will be in charge of certain functions of the turret.

According to EDR, the tank will weigh between 60 and 62 tons (similar to the Leopard 2) and incorporates an MTU 883 engine, which offers a power of 1,500 hp, and the Renk 295TM transmission. The power plant is slightly smaller than that of the Leopard 2, which has allowed the turret ring to be moved 20 cm backwards, leaving more space for the crew on the barge. 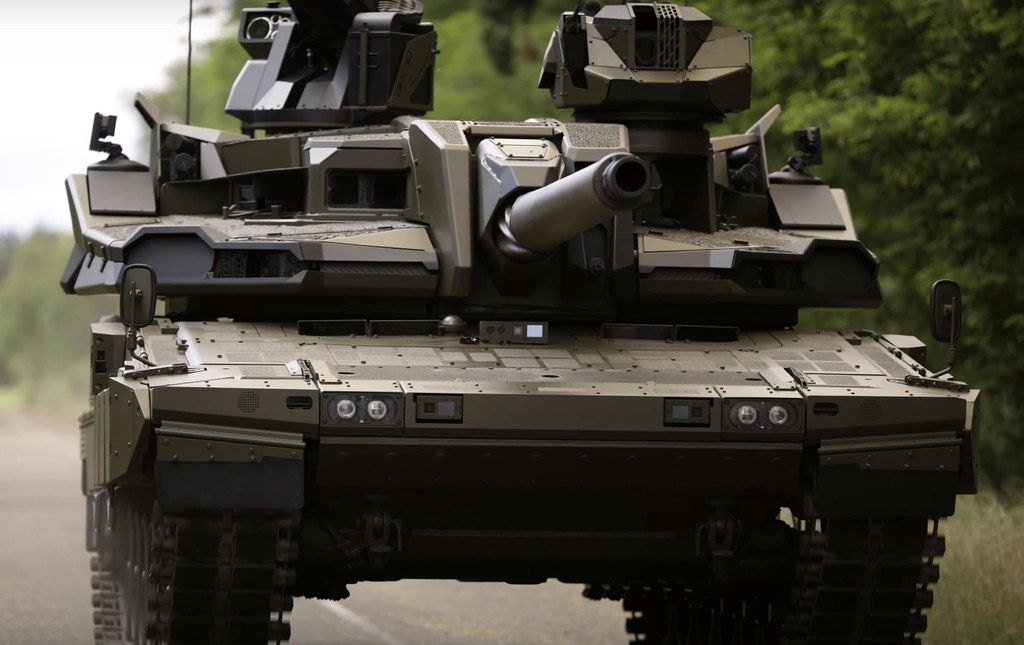 The EMBT is equipped with 23 cameras at different points, which offers better visual control to its crew, especially in urban environments. However, the commander and gunner carry optical periscopes. In addition,the vehicle has improved protection against landmines and improvised explosive devices, although no details about them have been provided. 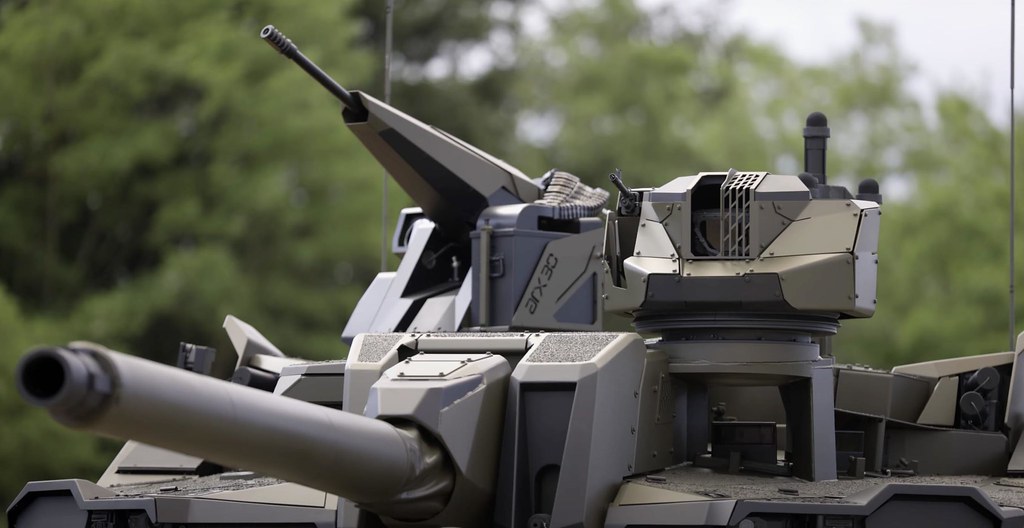 As for the turret, the design is completely new. The gunner will be on the right and the commander on the left. The EMBT will carry a 120 mm cannon similar to Leclerc's GIAT CN120-26/52/Nexter F1, with 22 rounds housed in the rear of the turret equipped with an autoloader, which allows to make a turret 80 mm lower than that of the Leclerc. The main gun carries a coaxial 12.7mm machine gun. It has also been pointed out that the EMBT could in the future integrate a ASCALON 140 mm cannon. 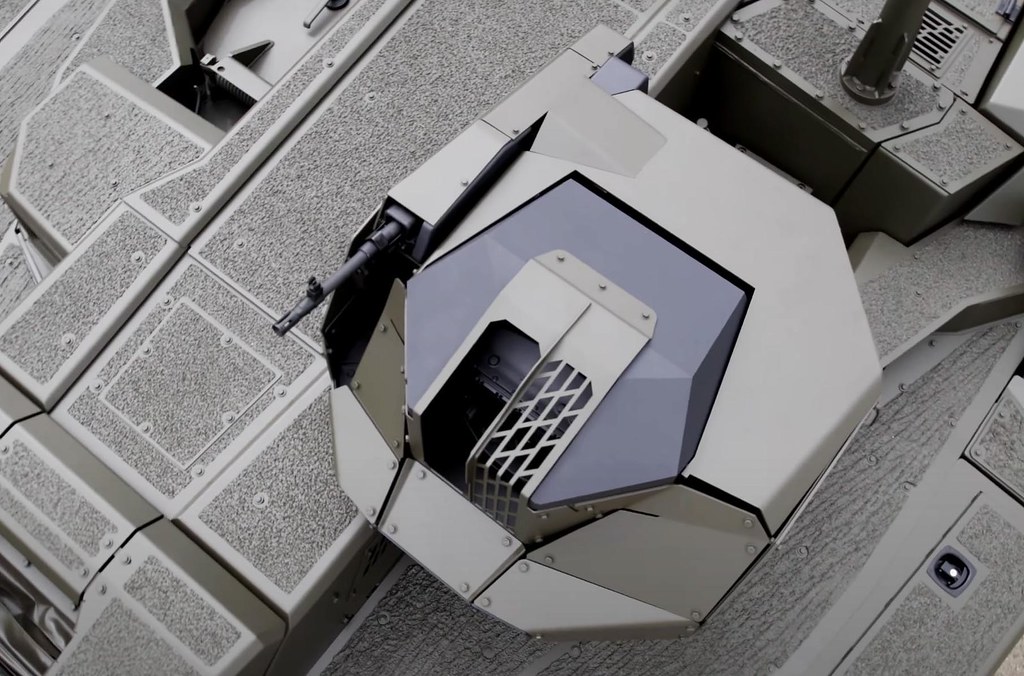 Above these lines we see the small remote-controlled turret with a 7.62 mm machine gun that will be mounted next to the commander's hatch, on the left side of the turret. 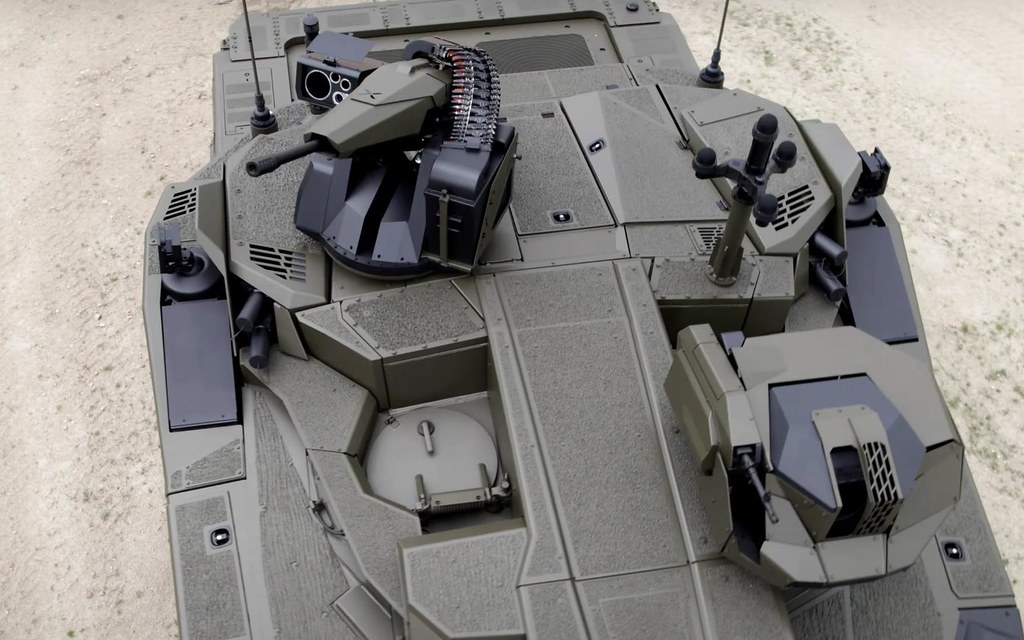 Also, on the right side of the turret, behind the gunner's hatch, is a larger ARX 30 turret, also remotely controlled, with a 30mm cannon. It will be controlled by the systems operator who sits on the left side of the barge, and its mission is to shoot down small drones and loitering munitions. There is the forecast of equipping this equipment with a radar to automate that function.