The obscene manipulation of TVE on the presidential elections in Brazil

Televisión Española, the state channel controlled by the coalition government of socialists and communists in Spain, continues to brazenly display its sectarianism.

The shameless bias of Spanish Television in favor of Lula

It has done it again in relation to the Brazilian presidential elections, the first round of which was held yesterday. That private left-wing media have a certain ideological bias with the money of its shareholders is absolutely legitimate in a democracy. That it be done by a state channel fed with the money of all taxpayers is something intolerable.

Last night, the TVE website published news reporting Lula da Silva's victory and that a second round will have to be held, given the small difference between the two candidates. Already in that news, TVE qualifies Bolsonaro as a "far-right candidate", but cites Lula as the "leader of the Workers' Party". The thing got even more blatant on the front page of the website, in which the public channel It showed the profiles of the candidates who will compete in the second round as follows: 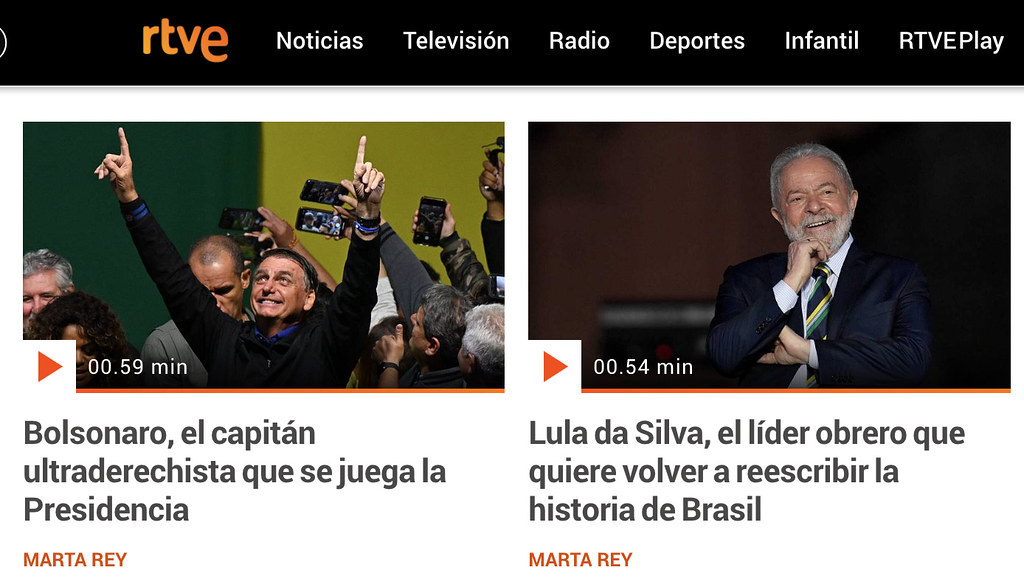 Headline on the left: "Bolsonaro, the far-rightist captain who is playing for the Presidency." Headline on the right: "Lula da Silva, the labor leader who wants to rewrite the history of Brazil."

As we can see, for TVE Bolsonaro is a "far-rightist captain", while Lula is a "labor leader". The ratings are what one would expect on the Twitter accounts of the socialists of the PSOE or the communists of Podemos, the coalition partners of the government that controls TVE. Furthermore, the headline sounds like a bad joke, moreover, if we take into account that in 2006 Lula was already the richest of the candidates for the Brazilian presidency (then he declared a net worth of 839,000 reais, about 420,000 US dollars), while in these elections he declared assets of 7.4 million reais ($1.36 million). Is this what TVE calls a "worker leader"?

In the TVE profile on Bolsonaro, he is crossed out of "ultraderechista" (far-rightist) up to four times. The text seems to have been written by those responsible for Lula's propaganda. Reading it, one imagines that the 44% of Brazilians who have voted for Bolsonaro must be something like monsters without feelings. What TVE does is closer to parody than journalism. The public channel is incapable of giving even one positive piece of information about the mandate of the current Brazilian president. It is even contemptuously affirmed that "he defended traditional values and the family ad nauseam ". "Ad nauseam", not like the constant rattle given us by the government of Sánchez in Spain with his ideological mantras.

The things that TVE forgot about the far-left candidate

On the contrary, in its profile on Lula, TVE refers to his ideology citing him as a "leftist", without further ado. Citing his corruption cases in passing, TVE's portrait of Lula is openly opposed to that of Bolsonaro, without any restraint. Of course: not a single mention of his fortune, his affinity with the extreme left or his nods to Russia.

Keep in mind that in 2016, Lula praised the communist dictator Fidel Castro saying he was like an "older brother". A few years earlier, in 2009, he showed his support for Iran. Also in 2021 showed his support for Venezuelan dictator Nicolás Maduro. More recently, the Workers' Party candidate has followed the same line as communists in other countries, blaming Zelensky, the United States and the Union Europe of the Russian invasion of Ukraine. Lula is a typical far-leftist, but TVE has been in charge of hiding it from its audience, just as he does in Spain with the communists of Podemos, IU and the BNG, whom he never calls "far-left". The prefix "far" is reserved on TVE for the right: typical of the most sectarian leftist journalism.