The Democratic Party and Biden's team participated in that censorship

Tonight, Musk has revealed the real reasons why his purchase of Twitter has caused so much nervousness among some.

Elon Musk exposes the censorship practices that were on Twitter

This Friday, Elon Musk announced that he would unveil "what really happened with the suppression of the Hunter Biden story", referring to what happened in October 2020 when Twitter and Facebook censored a story about a corruption scandal involving the son of then-Democratic candidate Joe Biden, during his run for the White House. As you will remember, the pressure to censor that news already were revealed in February 2021, after the elections, when Time magazine, a media related to the Democratic Party, published news bringing to light the pressure campaign launched from around that party to social networking companies to exercise censorship with the excuse of fighting "misinformation."

In this first installment of the Twitter archives (Musk has explained that tomorrow there will be a second installment), the new owner of that company linked a message thread posted by journalist Matt Taibbi: "The “Twitter Files” tell an incredible story from inside one of the world’s largest and most influential social media platforms. It is a Frankensteinian tale of a human-built mechanism grown out the control of its designer", Taibbi noted.

Taibbi adds: "Twitter in its conception was a brilliant tool for enabling instant mass communication, making a true real-time global conversation possible for the first time. n an early conception, Twitter more than lived up to its mission statement, giving people “the power to create and share ideas and information instantly, without barriers”."

However, Taibbi adds, "as time progressed, however, the company was slowly forced to add those barriers. Some of the first tools for controlling speech were designed to combat the likes of spam and financial fraudsters. Slowly, over time, Twitter staff and executives began to find more and more uses for these tools. Outsiders began petitioning the company to manipulate speech as well: first a little, then more often, then constantly."

"By 2020, requests from connected actors to delete tweets were routine", Taibbi notes, adding: "One executive would write to another: “More to review from the Biden team.” The reply would come back: “Handled.”" These were notices from the campaign team of Joe Biden's team to suppress comments from Twitter users without any judicial control, Taibbi shows two examples. The first is the quoted notice from the Biden team: 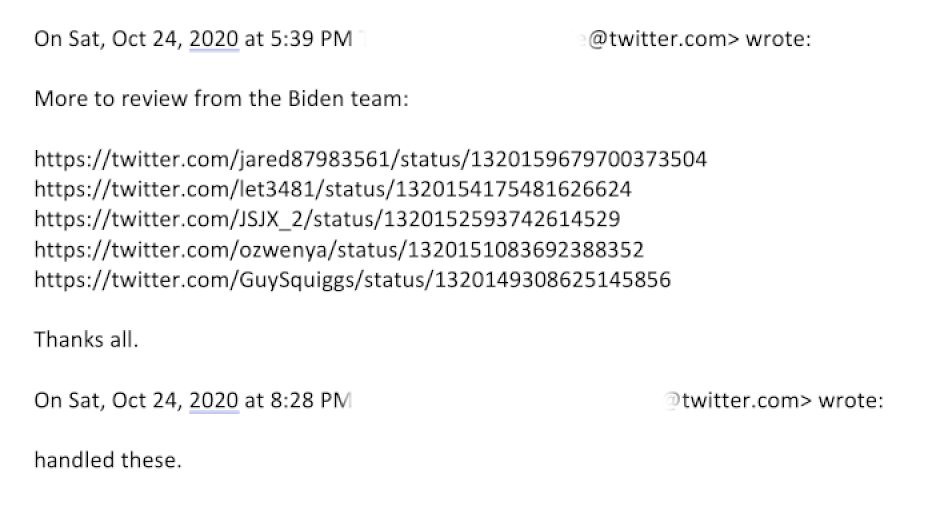 The second is a report by the "DNC" (Democratic National Committee) to censor more comments on that social network, including one by actor James Woods, a well-known supporter of the Republican Party:

Matt Taibbi comments: "Both parties had access to these tools. For instance, in 2020, requests from both the Trump White House and the Biden campaign were received and honored." However, the journalist adds that "this system wasn't balanced. It was based on contacts. Because Twitter was and is overwhelmingly staffed by people of one political orientation, there were more channels, more ways to complain, open to the left (well, Democrats) than the right."

Recall that on October 19, 2020, FoxNews revealed that in the previous two years Twitter censored Trump 65 times and Biden not once. The bias of this censorship is easy to explain, if we observe that in 2020, 98.47% of Twitter employee election donations went to the Democratic Party.

In the case of the censorship of the Hunter Biden story, Taibbi notes: "Twitter took extraordinary steps to suppress the story, removing links and posting warnings that it may be “unsafe.” They even blocked its transmission via direct message, a tool hitherto reserved for extreme cases, e.g. child pornography." Not only those who shared the link of the news about that case suffered this censorship , but also those who just talked about it: "White House spokeswoman Kaleigh McEnany was locked out of her account for tweeting about the story, prompting a furious letter from Trump campaign staffer Mike Hahn."

Taibbi reviews the Twitter documents that show the internal tensions generated by the censorship of that news within the company itself. Regarding the authorship of the censorship, the journalist affirms: "The decision was made at the highest levels of the company, but without the knowledge of CEO Jack Dorsey, with former head of legal, policy and trust Vijaya Gadde playing a key role." Precisely Vijaya Gadde was who made the decision to suspend Trump's account in January 2021. On October 27, 2022, Gadde was fired by Musk.

Only one Democratic congressman came out in defense of free speech

In the aforementioned thread, Taibbi also points out that only one Democratic congressman, Ro Khanna, voiced Gadde his concern about the attack that this implied on freedom of expression, protected by the First Amendment of the Constitution of the United States. The congressman even warned Gadde that this was "a violation of the principles of the First Amendment", giving him as an example a hypothetical case in which information was hacked -that was the false pretext by which Twitter censored the information about Hunter Biden - allowed to denounce war crimes. Would they also have censored it?

On the other hand, Taibbi cites the letter sent to Twitter by Carl Szabo, of the research firm NetChoice. Szabo had consulted several Republican and Democratic representatives and obtained an unusual response from the seconds. Democrats felt that social media needed more moderation because it was "corrupting democracy", and when asked how the government could do such a thing without violating the First Amendment, they replied that "The First Amendment isn't absolute." They were proposing, bluntly, cutting back on a constitutional right such as freedom of speech.

On the Democratic Party's reporting to Twitter to censor user comments, Elon Musk has commented: "If this isn’t a violation of the Constitution’s First Amendment, what is?" The new owner of Twitter has added: "Twitter acting by itself to suppress free speech is not a 1st amendment violation, but acting under orders from the government to suppress free speech, with no judicial review, is."

The issues that could appear in future installments of this investigation

Regarding the next installments of this investigation, Matt Taibbi has already advance that there is documentation that sheds light on issues such as shadow ban (the censorship many Twitter users suffer without being notified of any sanctions and without having broken the rules), follower count, the destination of various individual accounts and more. "These issues are not limited to the political right.,", adds the journalist.