Yesterday Lithuania, today Spain: they form a great cross to remember the one demolished by socialists

Yesterday was one year after the demolition of the Cross of the Church Square in Callosa de Segura (Alicante, Spain) by order of the socialist mayor and with the support of his allies of the far-left. The Hill of Crosses of Šiauliai, in Lithuania. During the Soviet dictatorship, the communists devastated it several times. Lithuanian Catholics raised the crosses again (Photo: Diego Delso / Wikimedia).

The precedent of the Hill of Crosses of Lithuania

What happened in that Spanish town is very reminiscent of events that took place in Lithuania in the last century. Since the time of the tsars, on a hill in the town of Šiauliai, crosses have been erected in memory of the Lithuanians killed by the Russian authorities. When the Soviet dictatorship was established, the Communists tried to put an end to the Hill of Crosses several times, even using bulldozers to destroy the crosses. They even planned to build a dam on the site to try to leave that hill inaccessible. However, every time the communists razed the hill, the Lithuanian Catholics set them up again, and there were thousands. Because of this, the Hill of the Crosses of Šiauliai ended up becoming a symbol of the national identity and the Catholic faith of Lithuania. 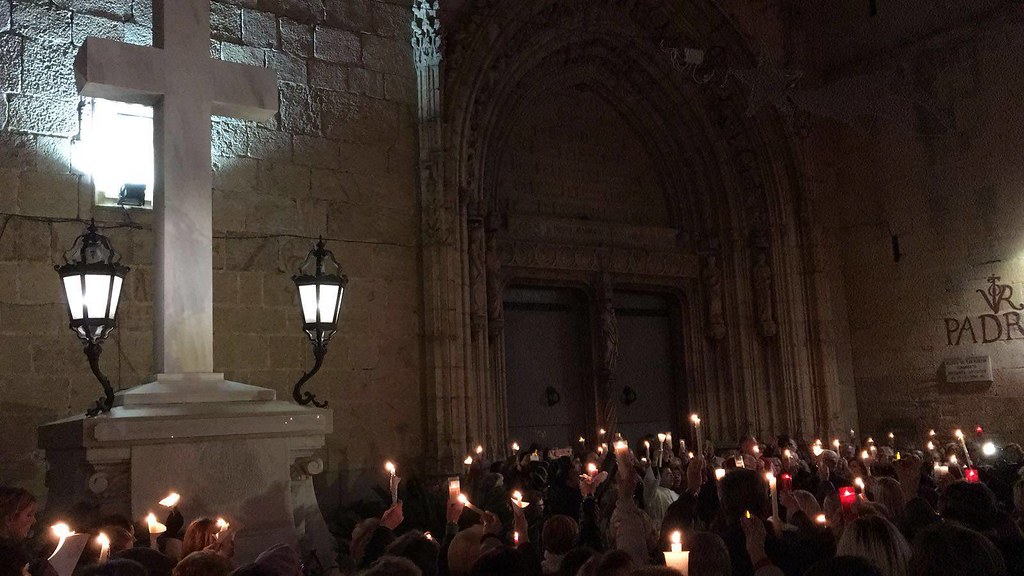 The Cross of Callosa, during a concentration of the neighbors to defend it in mid-December 2016 (Photo: Plataforma Ciudadana de Defensa de la Cruz).

Blinded by Christianophobia, the left-wing of Callosa wanted to tear the Cross from the Church Square. For more than a year hundreds of neighbors mobilized to prevent the demolition, both day and night. The neighborhood concentrations were constant and came to stop an attempt to tear down the monument, whose removal demanded the socialist mayor appealing to a Law of Historical Memory created to eliminate monuments of political content alluding to the Civil War or the Franco regime. But the Cross of Callosa did not have any political content. 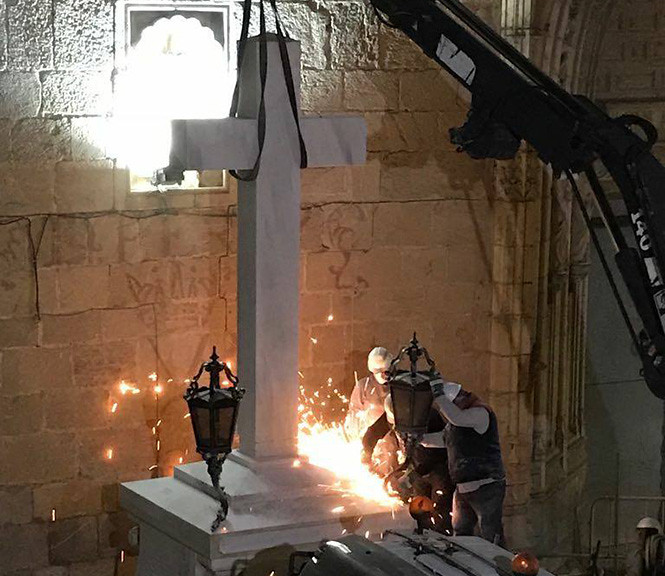 The Socialist mayor of Callosa called the Civil Guard to close the Church Square, and ordered to demolish the Cross with nocturnal, in the early morning of January 28 to 29, 2018. Despite this, many neighbors came to protest in the middle of the night against this insult.

Finally, in the early morning of January 28 to 29, 2018, the mayor asked the Civil Guard to cut the access to the square and, sheltering in the night, proceeded to the demolition of the cross, among the protests of many neighbors who came to the place to see what was happening. That night I told you live that infamous gesture of hatred of the socialist mayor. Already during the day, the Justice ordered to stop the demolition hours after having been consummated. 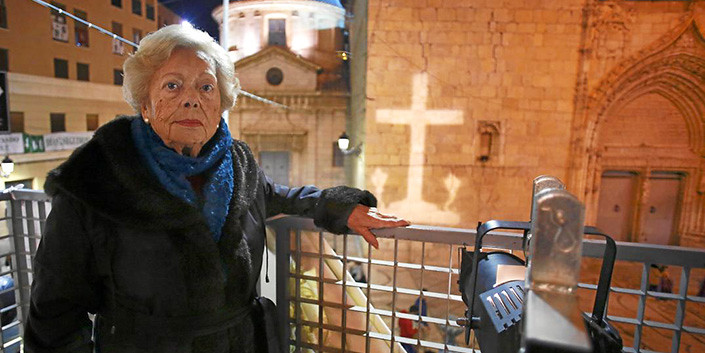 Teresa Agulló, 82, decided to project from her balcony a cross of light with the silhouette of the cross demolished. The city council imposed a heavy fine on her by misrepresenting a municipal ordinance (Photo: Objetivo Digital).

After that insulting attack against the religious feelings of many of Callosa’s neighbors, the neighborhood mobilizations continued. In addition, a neighbor, Teresa Agulló, decided to project from her balcony a cross of light with the silhouette of the demolished one. Blinded one more time by his cristianofobia, first the mayor ordered to put more powerful lights to cover that luminous cross and later he imposed a fine of 725 euros to Teresa, who is an old woman of 82 years. The fine, in addition, was imposed by distorting an ordinance on advertising, as I have already indicated here. With these facts it was clear that what was happening in Callosa was another example not only of the anti-Christian hatred of the left, but also of its arrogance and authoritarianism. 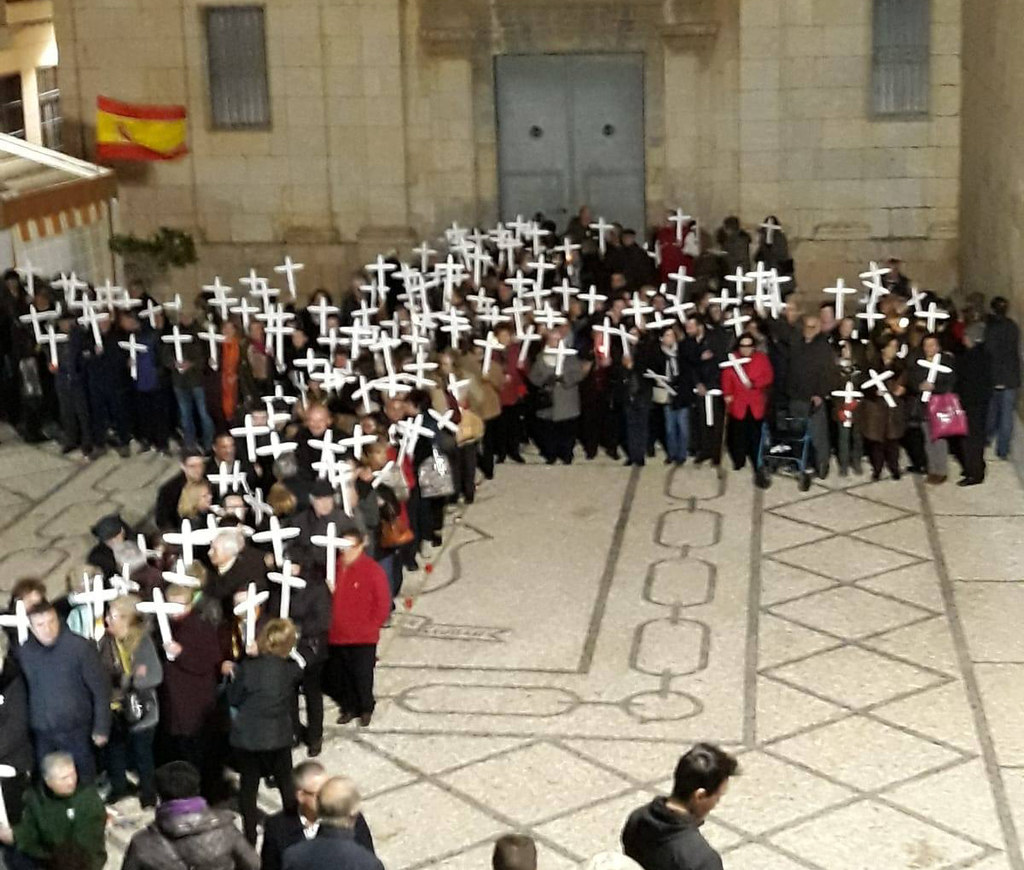 The great cross formed last night by the neighbors of Callosa in the Plaza de la Iglesia, on the first anniversary of the demolition of the Cross by the local government of the left (Photo: Plataforma Ciudadana de Defensa de la Cruz).

Yesterday the neighborhood platform in defense of the Cross came back to remember the demolition of the cross on its first anniversary: “Before the reason and nonsense of the elimination of the Cross just 1 year ago with treachery and nocturnal, with a police deployment and with teasing from the balcony of the City Hall,, many people from Callosa have wanted to express their firmness in the faith in a simple and very emotional act, filling the Church Square with previously blessed crosses and later forming a human cross as a sign of that the Cross is more alive than ever,” the platform says. The neighbors have shown their gratitude to the Spanish Association of Christian Lawyers, who continue to fight for this cause in the Courts, and also showed their gratitude to those who follow them and support them with their prayers. 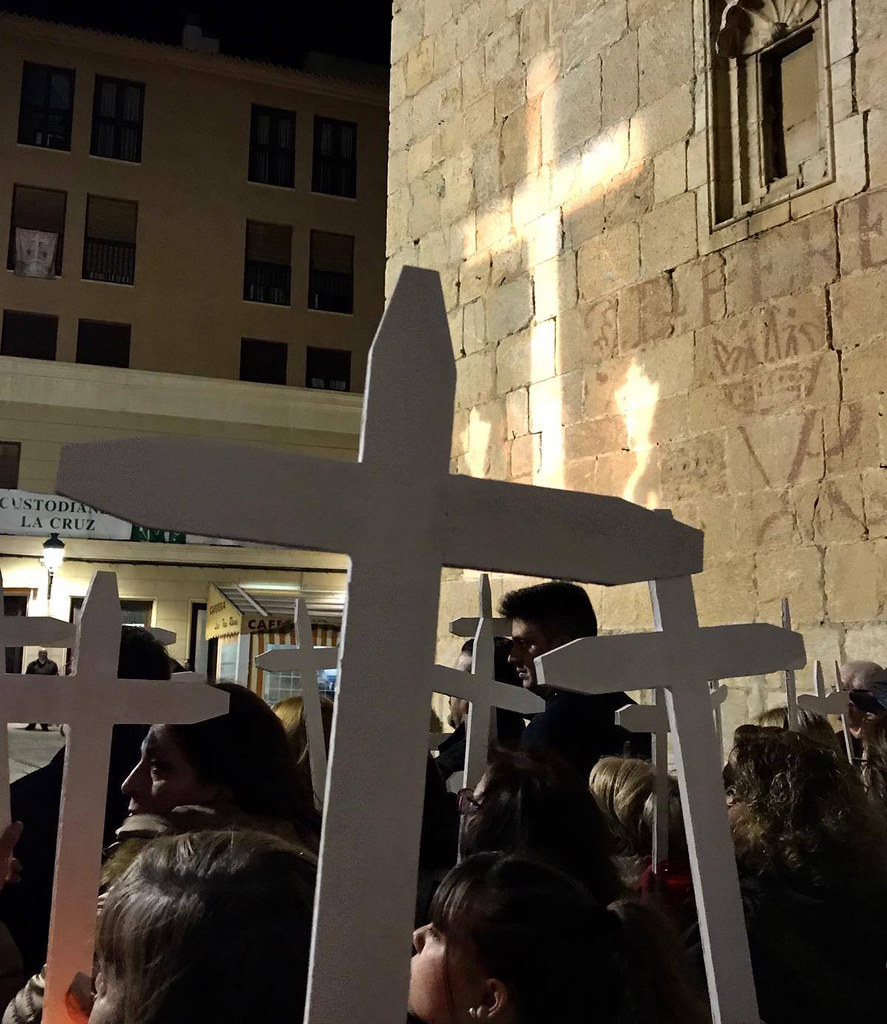 In addition, the cross of light, with the silhouette of the demolished one, returned to be projected in the facade of the Church, in a gesture of profession of faith and also of rejection to the authoritarianism of the local government. Meanwhile, some balconies bore images of the demolished Cross. 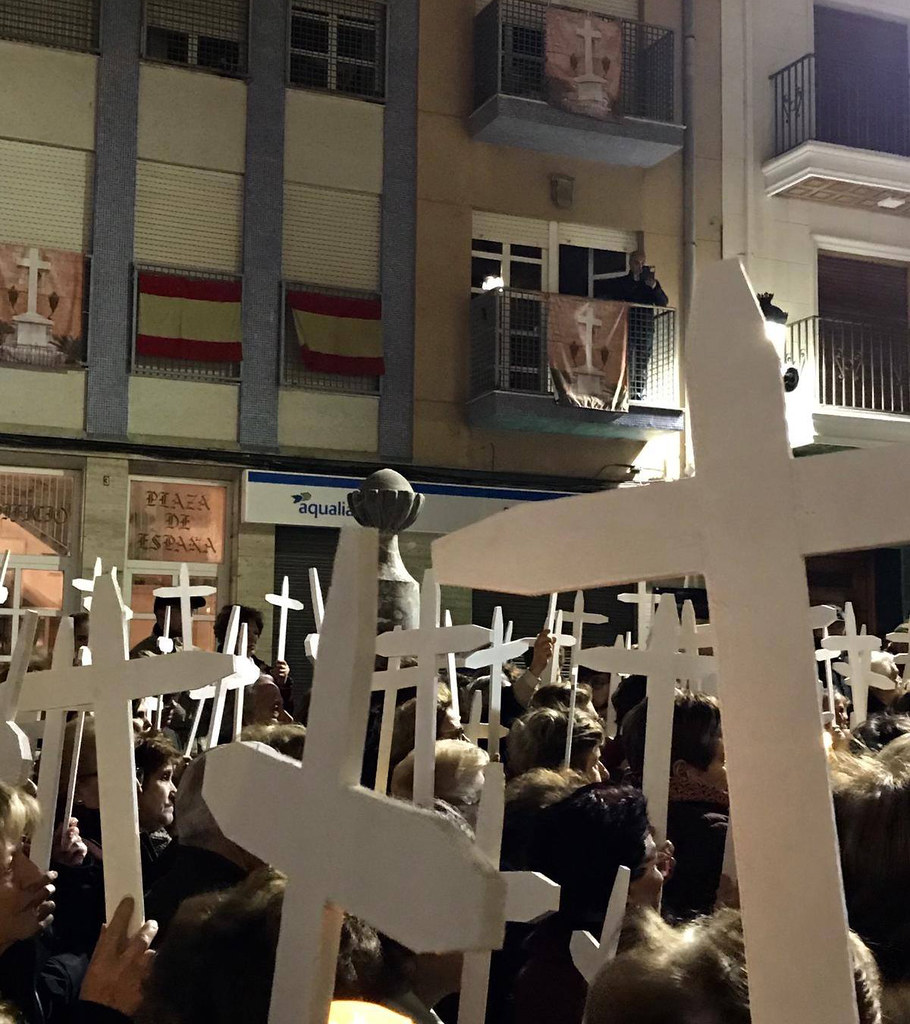 As I have already stated on several occasions, from here I return to express my support to the residents of Callosa against the christianophobic attitude of the local government. This year there are municipal elections. I hope those fanatics are evicted from power and a new local government puts the Cross back where it was and from which it should never have been torn.