The mere fact of defending ideological positions opposed to those of the left is becoming a motive to be investigated and signaled by leftist groups.

Today, the leftist organization Avaaz, based in New York, has sent its subscribers in Spanish an email entitled “Fake Watch” in which they show a screenshot of a publication made on March 31 at the Facebook page of Contando Estrelas, the Spanish edition of this blog. On the publication it puts a red sign that says “False”. Before that, Avaaz says to its subscribers: “Identify your target. Any suspicious element that intends to deceive or incite hatred or violence. Any fallacious or misleading content.” Before showing the screenshot of the Facebook page of this blog, Avaaz says: “Xenophobic headlines are invented to accuse immigrants of rapists.” Then, Avaaz encourages to denounce the content in question to various social networks to censor it. 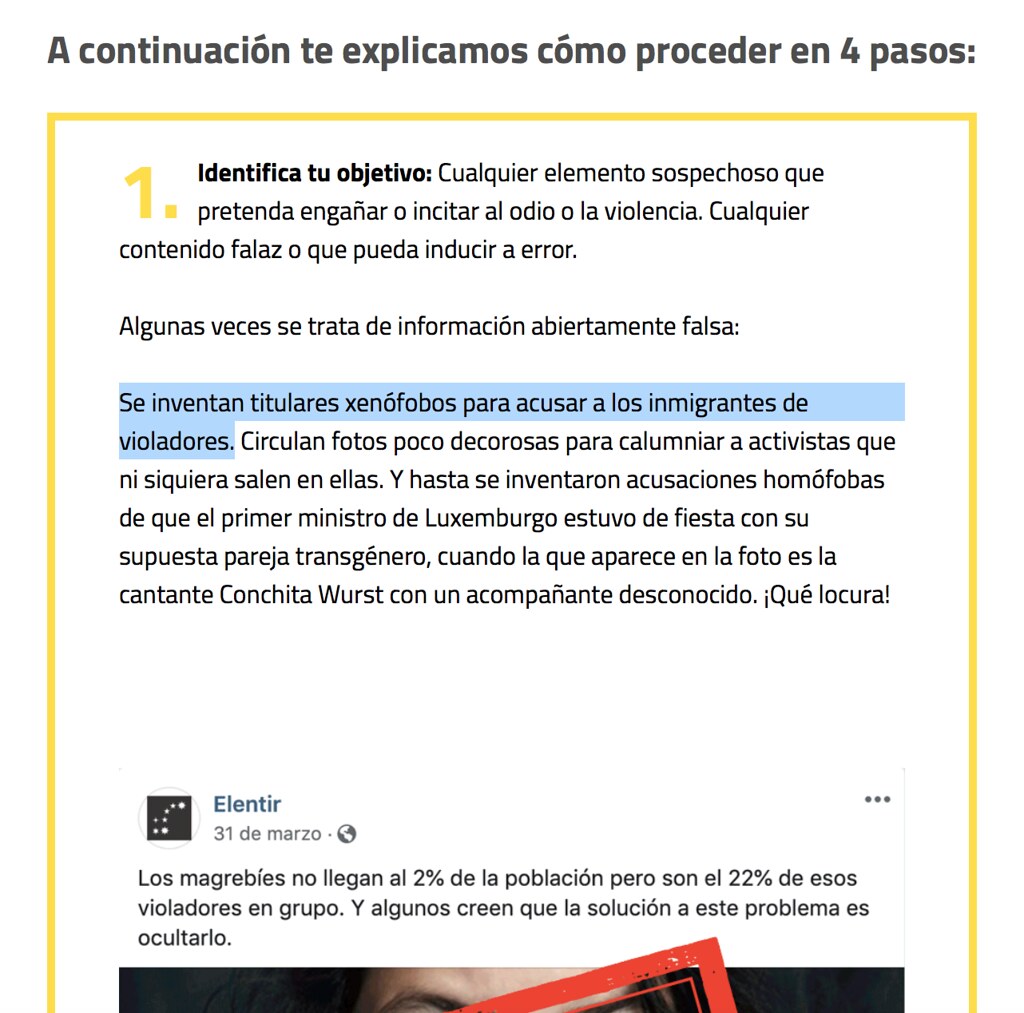 Honestly, the one who should file a complaint against Avaaz, but not on Facebook, but in a court, is me, because they falsely accuse me of “inciting hatred or violence,” by placing a publication of mine under that serious accusation. This blog does not incite either hatred or violence against anyone; even the comments are reviewed and if they are offensive they are deleted. What I refuse to accept as offensive or violent is the mere fact of disagreeing with the left, which is what that American organization seems to pretend to do.

To say that the majority of the Maghrebis “are honest people” is xenophobic?

Anyone can read here the post that claims to censor Avaaz. I only made one correction for an error in the headline: where I put 53% it was 49%. Unfortunately, Facebook does not allow editing an already published entry. Honestly, if I had the intention of “cheating”, as Avaaz affirms, what would be the point of correcting a figure that does not alter the meaning of the article? As readers of this blog know, I love the truth and I always try to be very scrupulous with the management of the sources and data I publish, offering access to the sources whenever possible, a practice that the vast majority of journalism has left nowadays. On the other hand, Avaaz forgets to say that the source of that entry was a story in the newspaper El Mundo, based on data from the Institute of Forensic Science and Security (ICFS) of the Autonomous University of Madrid. I also published in that entry data offered by the National Institute of Statistics. But also, in the last paragraph of that entry, I noticed the following:

“That there is a high percentage of Maghrebis among the “herds” of rapists does not mean remotely that all Maghrebis are rapists. That generalization, like any other, would be tremendously unfair. I am convinced that the majority of Maghrebis, and people of any other nationality, are honest people who do not harm anyone.”

According to Avaaz, this is “to accuse immigrants of rapists.” The world upside down. It must be said that, curiously, although it has demonized my post, Avaaz has not signaled the story of El Mundo that published this data. It’s incomprehensible. If I publish some data and Avaaz assures – falsely – that I have invented them, the logical thing would be to also denounce the newspaper that has published them. What happens is that if Avaaz pointed to El Mundo, it would be clear that these data were not invented by me, but published by a newspaper and with a source, in turn, very reliable.

Avaaz includes this blog as the first on its blacklist

Searching on Google, I found a 69-page document published by Avaaz on April 12 warning of a kind of conspiracy to influence the general elections in Spain through Facebook pages. The report showed 17 pages of Facebook that Avaaz has managed to censor and collected the aforementioned publication of the Facebook page of Contando Estrelas. It must be said that Facebook has not censored that publication (I insist: it is still accessible) and has not deleted my Facebook page either. And that despite the efforts of Avaaz. On page 64 there is a black list of Spanish websites, Counting Estrelas is the first website in the list:

The Avaaz blacklist does not include any leftists or separatist websites

On the list is read an English text that states: “Below is a non-exhaustive list of “outlets” that we recommend Facebook investigate to see whether they, or any other Pages and Groups (not necessarily included this report), are acting as amplifiers and/or spammers.” Interestingly, there is not a single leftist or separatist website on that list, and that despite the lies that have been launching Catalan secessionist websites around the separatist coup on October 1, 2017. On that list do appear digital newspapers as Libertad Digital, El Debate, Ok Diario and Periodista Digital and a blog as popular as Dolça Catalunya.

If it accuses us of crimes, why has Avaaz not appealed to the courts?

It’s obvious to say that if Avaaz believes that this blog and other websites cited by that group incite hatred and violence – a behavior that criminalizes the Spanish Criminal Code -, the logical thing would be to resort to the courts. If Avaaz resorts to request censorship in social networks, it is because it knows that in the courts its attempt to silence right-wing websites would not go very far. Recall that a few years ago the far-left journal Public already lost a trial against Contando Estrelas, which thus became the first Spanish blog taken to court by a media to punish me – and I quote the ruling – by mere “exercise of freedom of speech”, which is a constitutional right. It is much easier to ask for censorship from politicians or private entities, more inclined to be influenced and not going to bother to review the content in question as a court would. That is why more and more progressive parties and media opt for methods of censorship outside of Justice.