Poland is a great country that has resisted with blood, sweat and tears the two great totalitarianisms of the 20th century: communism and national socialism.

After the fall of communism in Europe, this ideology tries to recover lost ground through various movements of the so-called new left. One of its ideological fronts is gender ideology, which tries to impose itself in schools by attacking the right of parents to decide the religious and moral formation they want for their children. Several European countries have bowed to that ideological agenda, including Spain. However, Poland has refused to submit to these impositions.

An anti-pedophile campaign against the promotion of sex among children

In March last year, the popular legislative initiative "Stop Pedofilii" (Stop Pedophilia), promoted by the Fundacja Pro-Prawo do Życia and backed by more than 265,000 signatures, was registered in the Sejm (the Polish Parliament). Stop Pedofilii claims to penalize the promotion of sexual relations between children, expanding Article 200b of the Polish Penal Code, which already penalizes the public promotion of pedophilia. The project is supported by the Prawo i Sprawiedliwość (PiS, Law and Justice) party, which governs Poland and whose candidate, Andrzej Duda, recently won the presidential elections.

This Stop Pedofilii campaign has been the subject of gross manipulation by the majority of the European media, as I have already denounced here. Based on these manipulations, in November 2019 the European People's Party, the Socialist Party and the far-left of GUE/NGL promoted a motion accusing the Polish Government of "criminalization of sexual education in Poland". The motion encouraged the member countries of the European Union to introduce sexual education in schools that includes abortion, that is, the violent elimination of the weakest and most defenseless in the womb. An absolute aberration.

Curiously, groups of the far-left have taken the Stop Pedofilii campaign as an attack against them, which prompts the question of what they intend to impose on Polish schools. On Saturday June 27, when the vehicle was passing in front of an Okupa house at 30 Wilcza Street, in Warsaw, an individual stood in the middle of the street to prevent it. Subsequently, a group of "antifa" extremists, some armed with knives, attacked and destroyed a van from that anti-pedophile campaign, ripping off its rear license plate. The attackers themselves published the images of their attack on the page of the anarchist LGTB group Stop Bzdurom on Facebook: 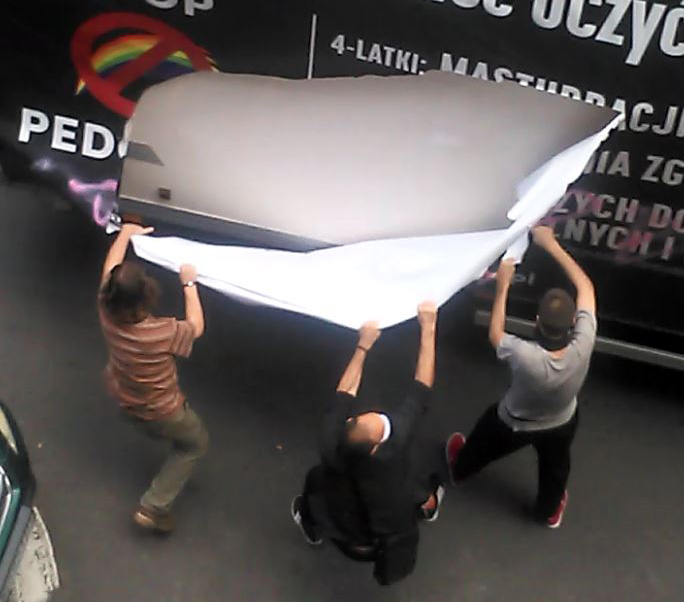 Among the photos published by the assailants is one in which they pose with the license plate stolen from the vehicle of the anti-pedophile campaign. The man in the photo, Michał Szutowicz, calls himself Małgorzata Szutowicz, aka "Margot": 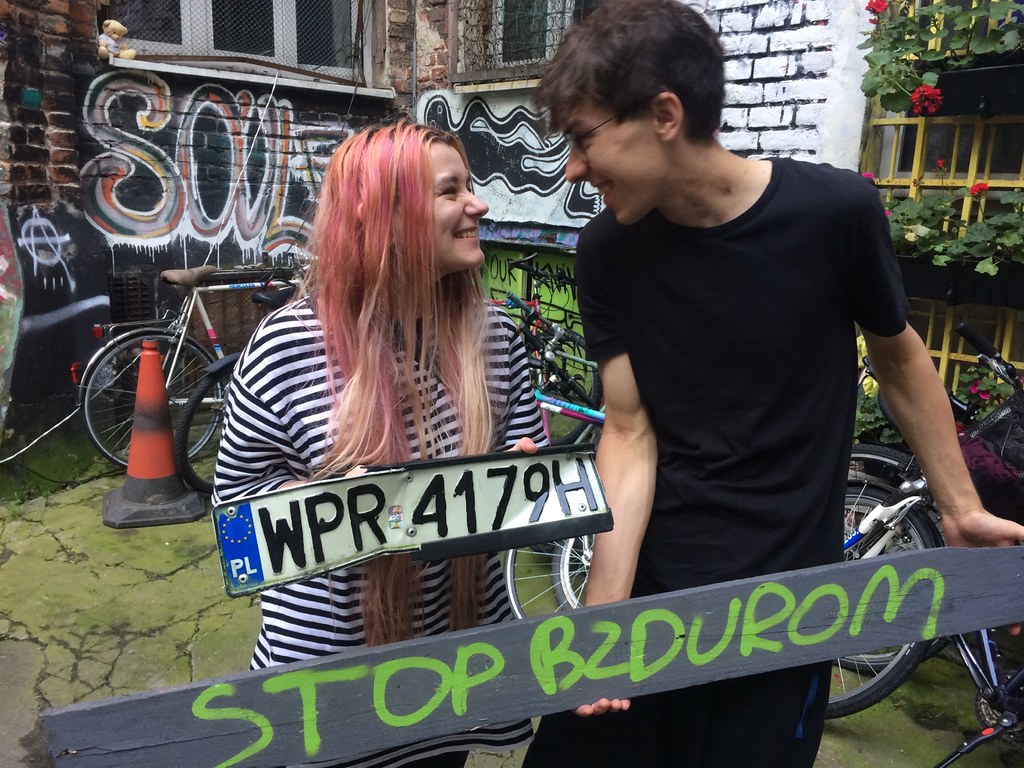 The Fundacja Pro-Prawo do Życia published this video of the events - recorded by a camera located inside the van - on its YouTube channel:

The charges that Szutowicz faced for this assault

Three days after the publication of this video, in which he appears as one of the assailants, Szutowicz was arrested by the Polish Police. The Prosecutor's Office accused him of the attack on the vehicle of the anti-pedophile campaign, specifically of "cutting the tires, cutting the canvas, ripping off a mirror, pulling off the license plate, damaging the rear view camera and staining the vehicle with paint". valued at 6,000 zlotys (1,359 euro, USD 1,602). He also accused him of hitting one of the occupants of the van, causing injuries to his back and his left wrist.

The attacks by these far-leftists have not been limited to the aforementioned anti-pedophile campaign. On the night of July 28-29, they desecrated the statue of Christ located in front of the Basilica of the Holy Cross in Warsaw. It is a statue much loved by the Poles, as the Germans demolished it and tried to destroy it in 1944, but they finally abandoned it and it was replaced in 1945, becoming one of the few monuments that survived the destruction of Warsaw by the Nazis after the defeat of the Uprising of August 1, 1944. 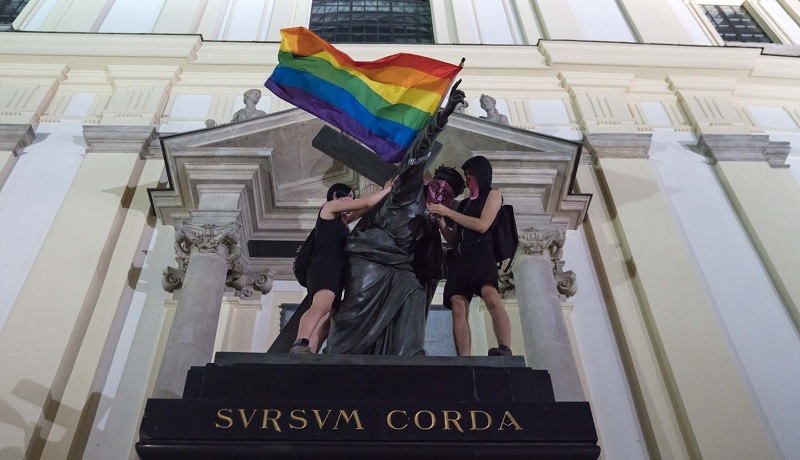 In addition to the aforementioned Catholic monument, the statues of the Warsaw Mermaid, by Józef Piłsudski, Nicolás Copernicus, Wincenty Witos and Taras Shevchenko were also vandalized. These acts of vandalism, especially the desecration of the Christ statue, sparked outrage in Poland. On the morning of July 29, the anarchist LGTB group Stop Bzdurom, the same group that had attacked the anti-pedophile campaign, claimed responsibility for these acts of vandalism against statues. Shortly after, the Deputy Minister of Justice reported the events to the Prosecutor's Office. On August 4, two activists from the Stop Bzdurom group were arrested in connection with these events. One of the detainees was Michał Szutowicz.

Following the acts of vandalism against Warsaw statues, on August 1, the Stop Bzdurom page encouraged violence against the aforementioned anti-pedophile campaign, stating: "There is no point in trying to act legally. Stopping and waiting for the police to arrive is a greater danger to you than to pro-life. Even more so when the foundation often works under police protection." After learning that the Fundacja Pro-Prawo do Życia records what happens from its van, Stop Bzdurom called on his followers to act hooded. In addition, and after an icon of a bomb, it added: "There are other methods of operation that last a few seconds and require the ability to volatilize." In case they delete it, here you can see a copy of the message.

Yesterday, a court sentenced Michał Szutowicz to two months' arrest for his attack on the anti-pedophile campaign. In the afternoon, LGBT activists held a protest outside the Basilica of the Holy Cross in Warsaw, the same place where Szutowicz desecrated the statue of Christ. The Polish Police monitored the protesters so that the desecration would not be repeated. While the European media conceals this attack by the ultra-left against the anti-pedophile campaign in Poland, the day before yesterday deputies of the leftist Lewica coalition went to the Polish Parliament wearing masks with the LGTB flag, in a clear gesture of support for the groups that desecrated the statue of Christ in Warsaw and that they attacked an anti-pedophile campaign.

Foreign media hide the 'antifa' attack against the anti-pedophile campaign

Foreign progressive media such as The New York Times (USA) and El País (Spain) have hidden the background of this gesture from their audience. Euronews has cited acts of vandalism against monuments in Warsaw, but has silenced the attack on the anti-pedophile campaign. This is how they manipulate public opinion: hiding the facts from them. A wall of silence that Counting Stars will continue to try to tear down.