They accused the government of "violating the Constitution" with the pardons

The demonstration against the pardons to the leaders of the Catalan separatist coup of 2017, this Sunday in Madrid, has been a complete success.

Convened by the citizen platform Unión 78, tens of thousands of people -126,000, according to the Madrid Municipal Police- have packed the Columbus Square and the surrounding streets, turning them into a sea of red-and-yellow flags (photo by @DavidArranzVox).

The Columbus Square was already almost packed an hour before the official time of the call, 12:00 noon (photo by Unión 78). 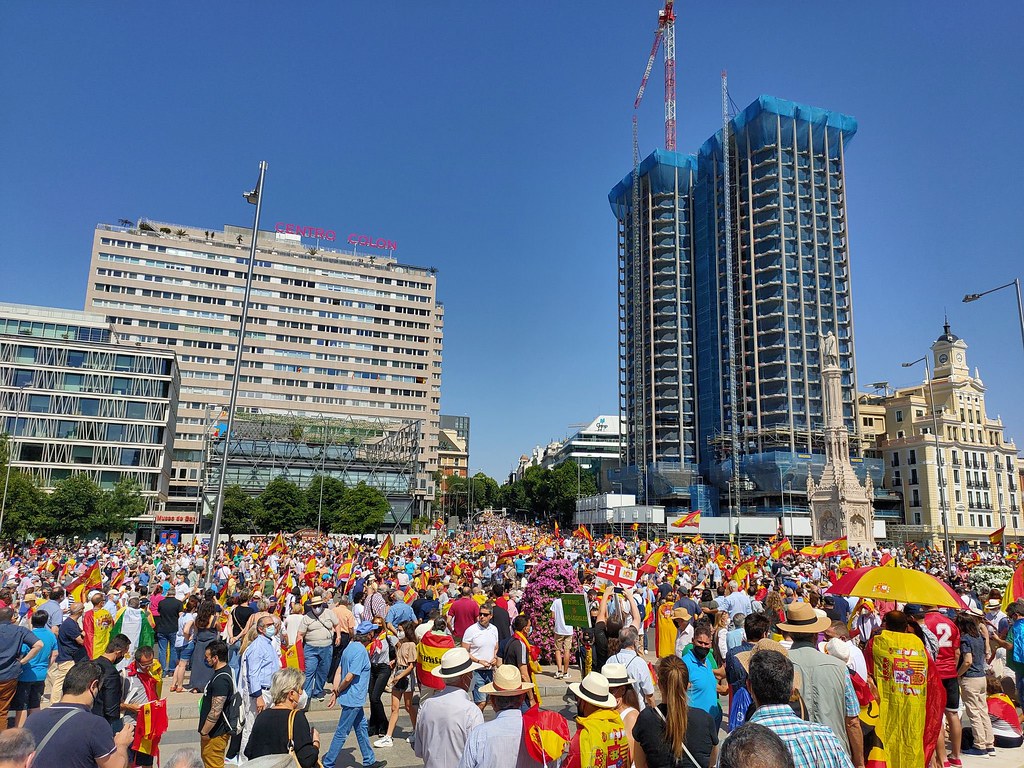 Despite the intense heat that it was, the protest has exceeded all forecasts and surely also those of the government, which has launched itself to try to downplay the success of the demonstration, saying that there were 25,000 people, and leaving without counting the multitude of the streets surrounding. The account is made by the same government that has manipulated the death toll from the pandemic for months (photo by @Pilar_Magan). 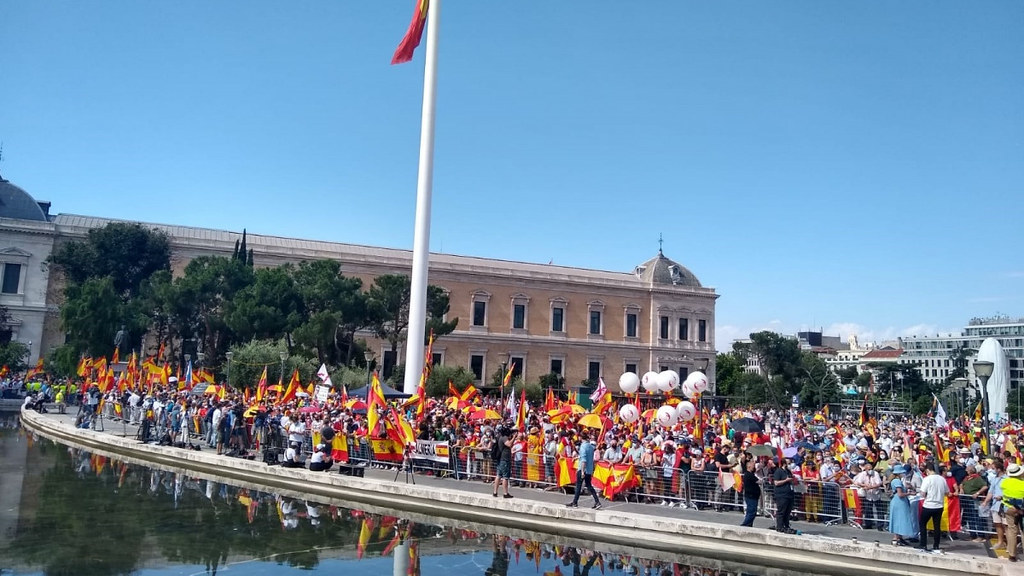 In her speech, Rosa Díez, a member of the convening organization, stated: "we have gathered here today to express loud and clear our radical rejection of the granting of pardons to those convicted of committing the crimes of sedition and embezzlement in Catalonia. We consider that such pardons represent a serious attack against democracy, perpetrated by the government of Spain itself. The law says so, the prosecutors report it, the Supreme Court has reiterated it: without request and repentance, there is no pardon" (photo by José Luis Martínez Almeida). 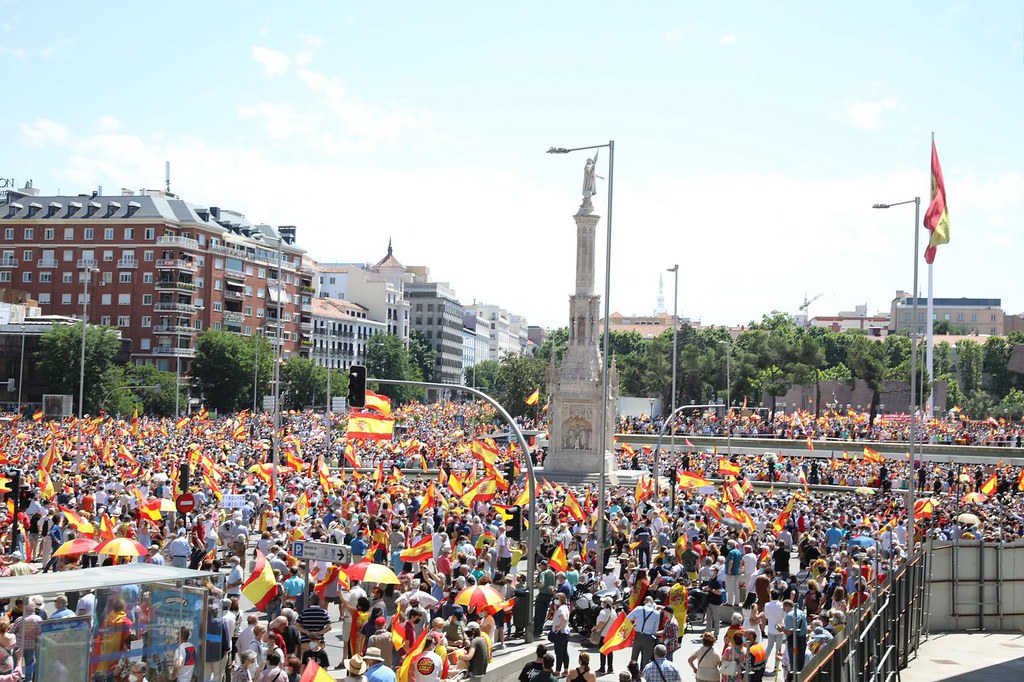 Rosa Díez has denounced that "the convicted defy us all by announcing their willingness to repeat the crimes for which they were tried with all guarantees. Crimes that are intended to break Spain and de facto repeal the Constitution of 1978, the framework that guarantees national unity and the equality of all Spaniards before the law. If under these conditions the Government pardons the criminals, it will be violating the Constitution" (photo by @Paco_Almanzor). 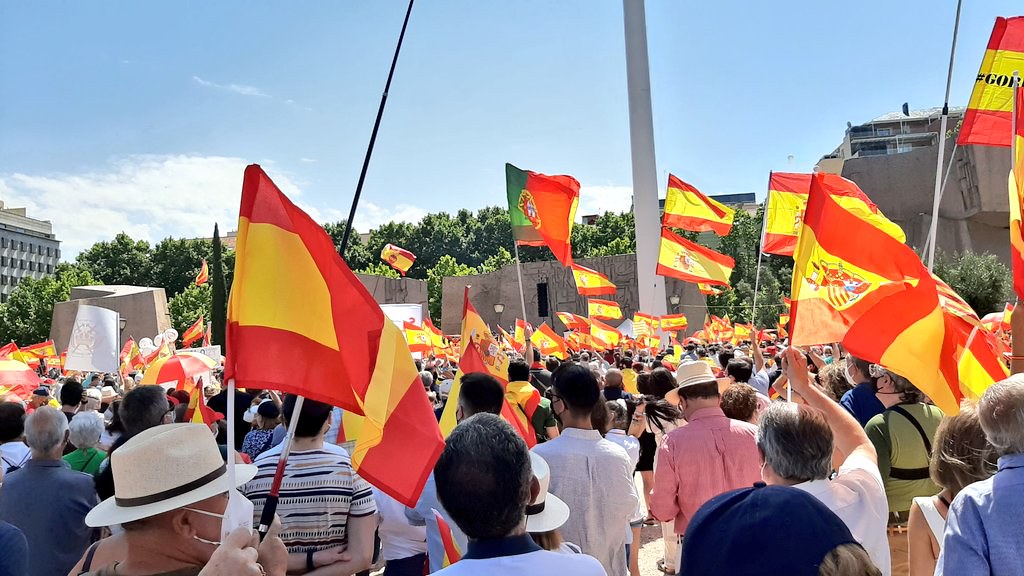 Diez has also affirmed: "A government that insults and excludes more than half the country by calling it the extreme right is not a government for everyone, it is an exclusive, sectarian and dangerous power. In the Sánchez government, systematic lying has replaced politics. When has Sánchez told a truth? When did he declare that he would never pardon those convicted of sedition and embezzlement in Catalonia, that they would serve their sentences in full (that is what he said in 2019), or now, when he says that pardons will bring normality to Catalonia?" 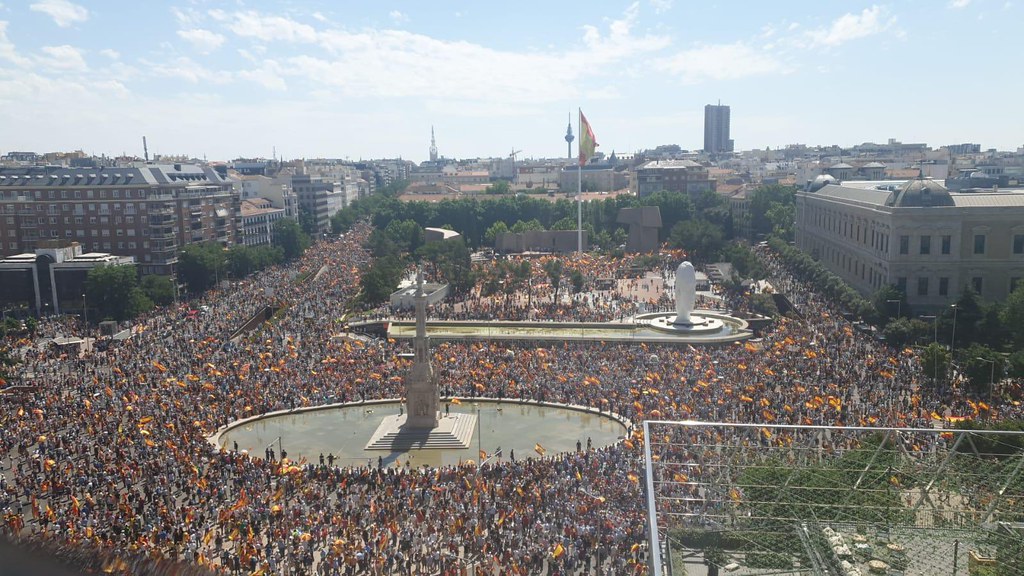 "After destroying all consensus, Sánchez needs the vote of criminals convicted of sedition and embezzlement, like those of those others who were convicted of terrorism and are so proud of their criminal history. It is the Government that gives criminals all the facilities to reoffend, deepening the political and social fracture, both in Catalonia and throughout Spain. But we are not going to indulge in silence. We are not going to admit that our freedoms, our Constitution or our Nation is handed over as payment to criminals so that Sánchez can stay two more years in Moncloa," Rosa Díez said (photo by @Daniel_Sanz_C. The banner reads: "Protected coup leaders, abandoned Spaniards"). 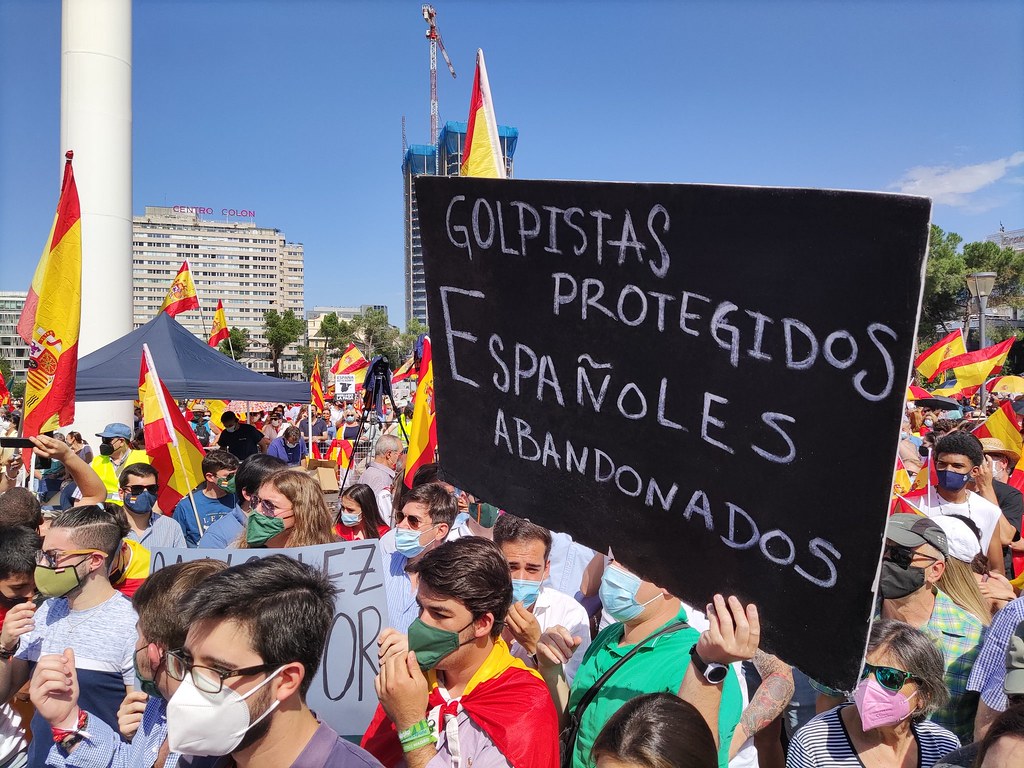 Several political parties with a presence in Congress and various civic organizations have supported this call. The leaders of Vox have gathered around the statue of Blas de Lezo. In this photo we see Santiago Abascal offering some statements to the media accompanied by the national deputy Iván Espinosa de los Monteros, the regional deputy and president of Vox Madrid Rocío Monasterio and the MEP Jorge Buxadé (photo by Santiago Abascal). 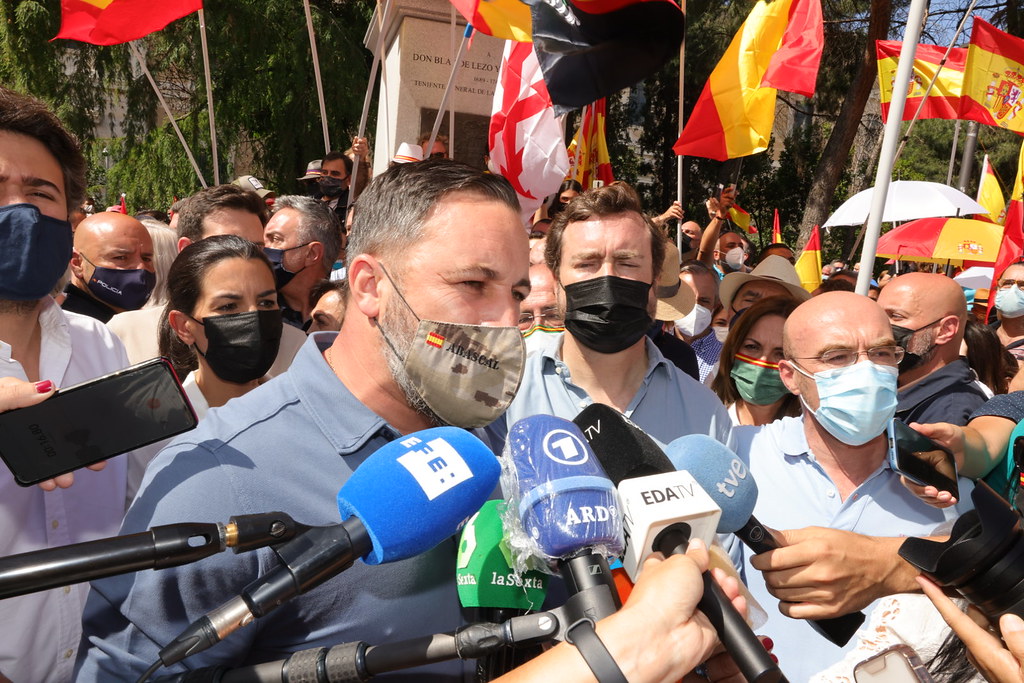 The leaders of the Popular Party (PP) have concentrated in Genoa 13 Street to later move to Columbus Square. Here we see Pablo Casado, president of the PP, with the president of the Community of Madrid, Isabel Díaz Ayuso, the mayor of Madrid José Luis Martínez Almeida and the general secretary of the PP Teodoro García Egea (photo by Pablo Casado). 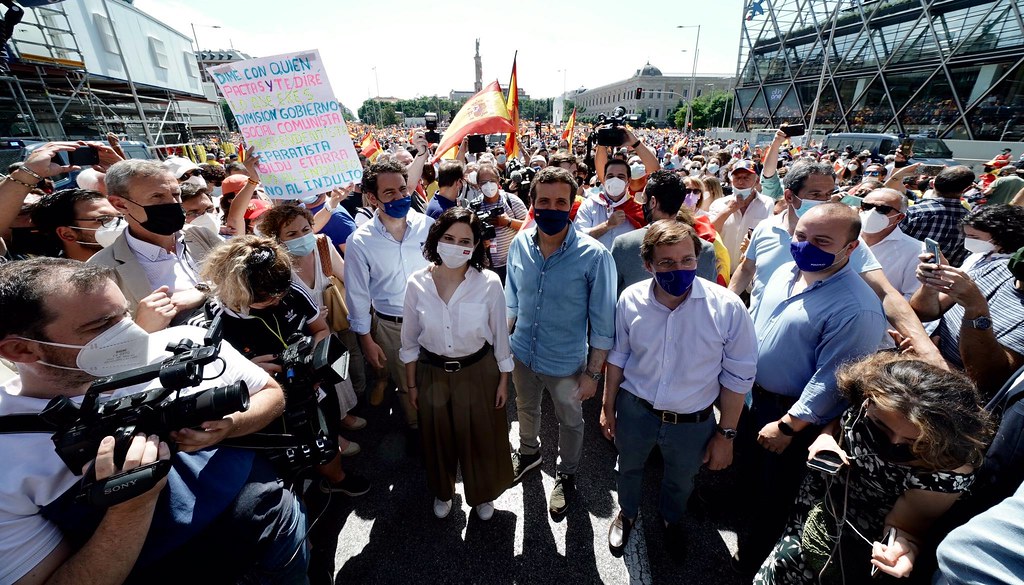 Inés Arrimadas and other leaders of Ciudadanos party have also attended the demonstration (photo by Begoña Villacís). 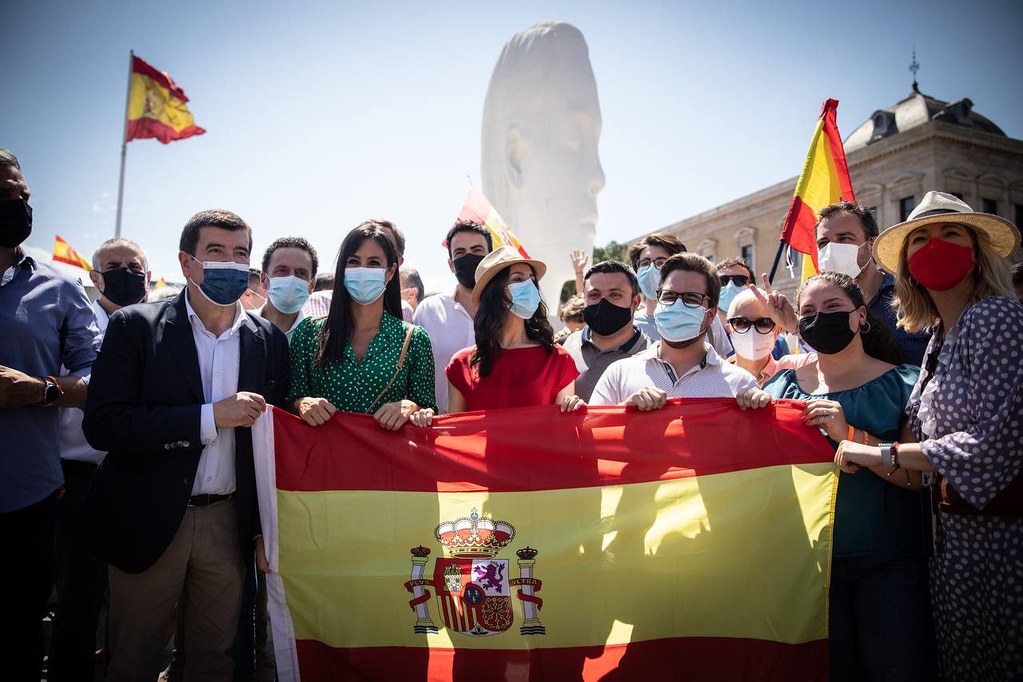