March of Shadows: Poland remembers those killed by communism in Katyn

Last Sunday, for the 14th time, Warsaw was the scene of the so-called “Marsz Cieni” (March of Shadows), a breathtaking event of historical reenactment.

This event remembers every year the 22,000 Poles, of them about 15,000 Army officers, who were assassinated by the Soviets in Katyn in 1940. The march is usually held in April, but this year it was postponed until September due to the current health situation. This year, in addition, this march is preceded by the lies of the Russian government to justify the Soviet invasion of Poland in 1939, through a message from its Foreign Ministry on Twitter that has caused deep indignation in Poland. 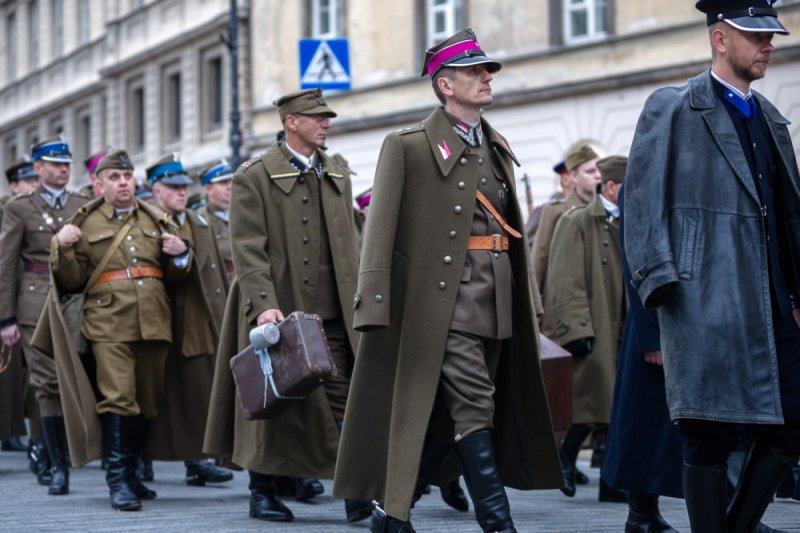 Before the March of Shadows, a Mass in remembrance for those killed was celebrated yesterday at the Polish Army Cathedral in Warsaw. At three in the afternoon the march, organized by the Institute of National Remembrance and the recreation group Zgrupowanie Radosław, began at the Museum of the Polish Army. 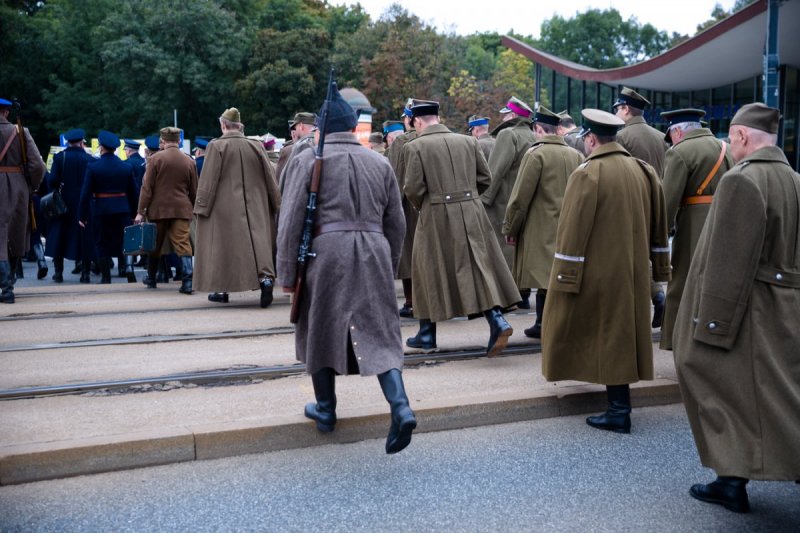 Some 150 reenactors took part in the event representing the murdered, uniformed as officers of the Polish Army, as members of the Border Corps and agents of the State Police. Some reenactors also wore uniforms as Soviet soldiers and members of the NKVD, Stalin’s political police, in the role of guardians and executors of the prisoners. 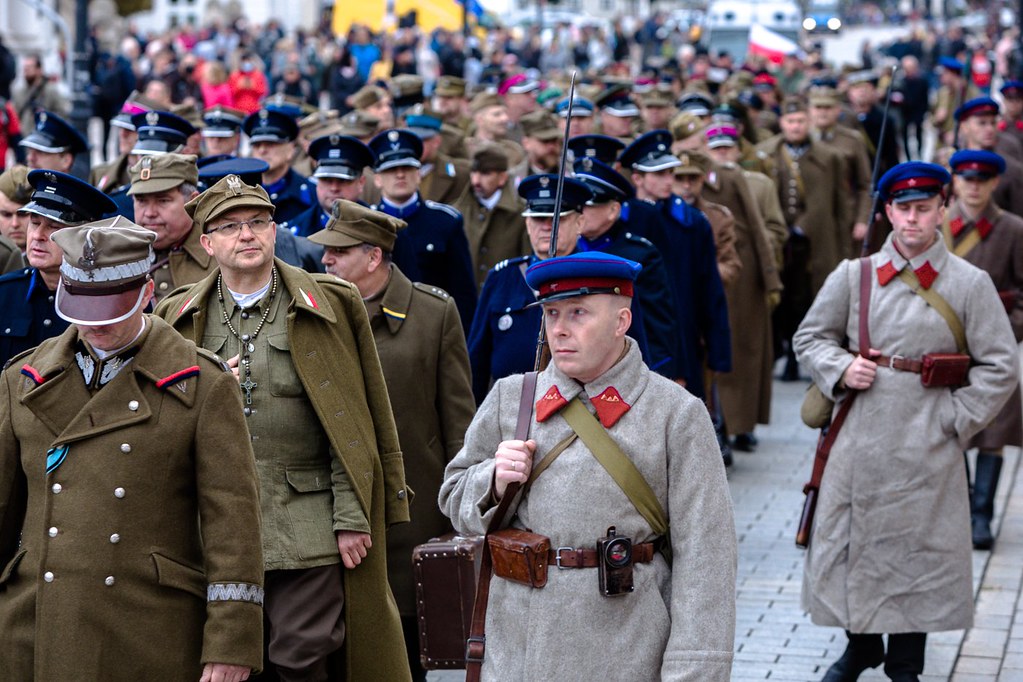 The March of Shadows always runs in shocking silence, only occasionally broken by the orders of the Soviet guardians. 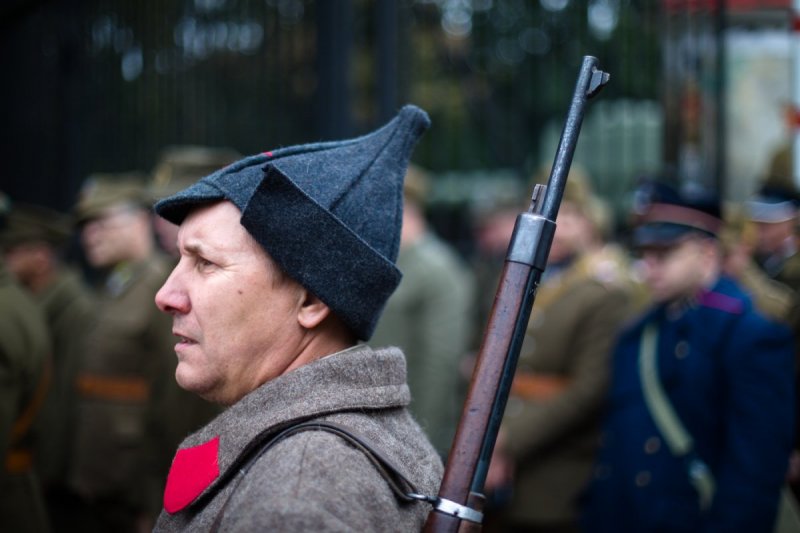 All the details of the March are very careful. Historical reenactment in Poland is very accurate and well documented, from uniforms to weapons. In the picture, one of the Soviet guardians. 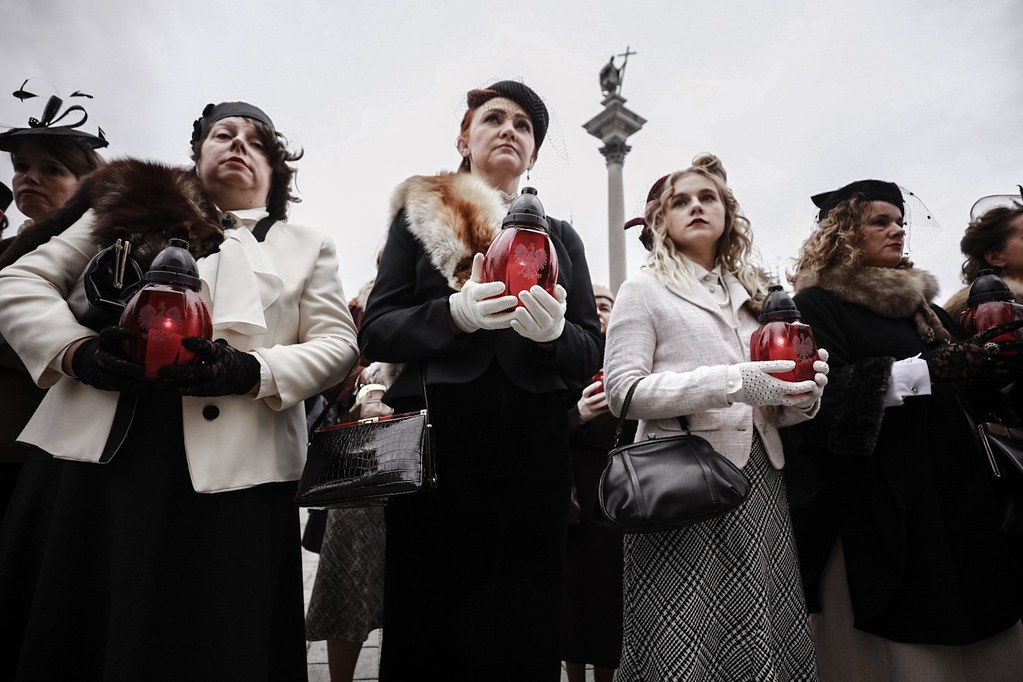 Women in civilian dresses of the time also participate in the March. They represent the wives, girlfriends, mothers and sisters of the murdered, who for many years after the war saw the truth about the fate of their loved ones being denied them, as the communist propaganda insisted on imputing the authorship of the massacre of the Germans until 1989. 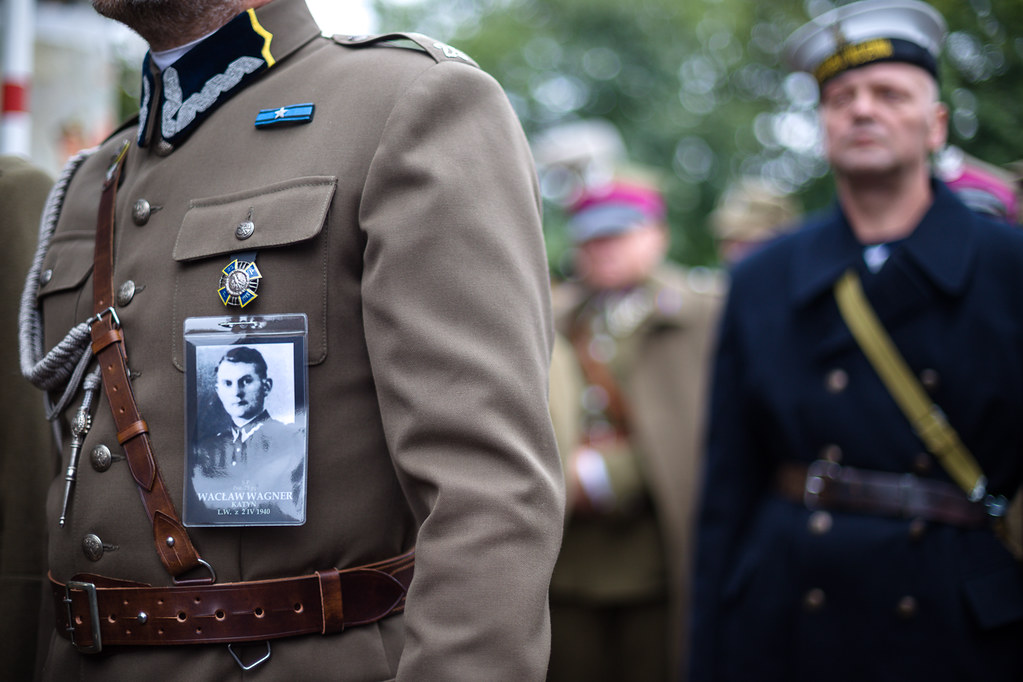 Some of the Polish prisoners carry photos of Katyn’s victims hanging from their jackets and coats. Surely the bearers of these photos are descendants of the murdered. 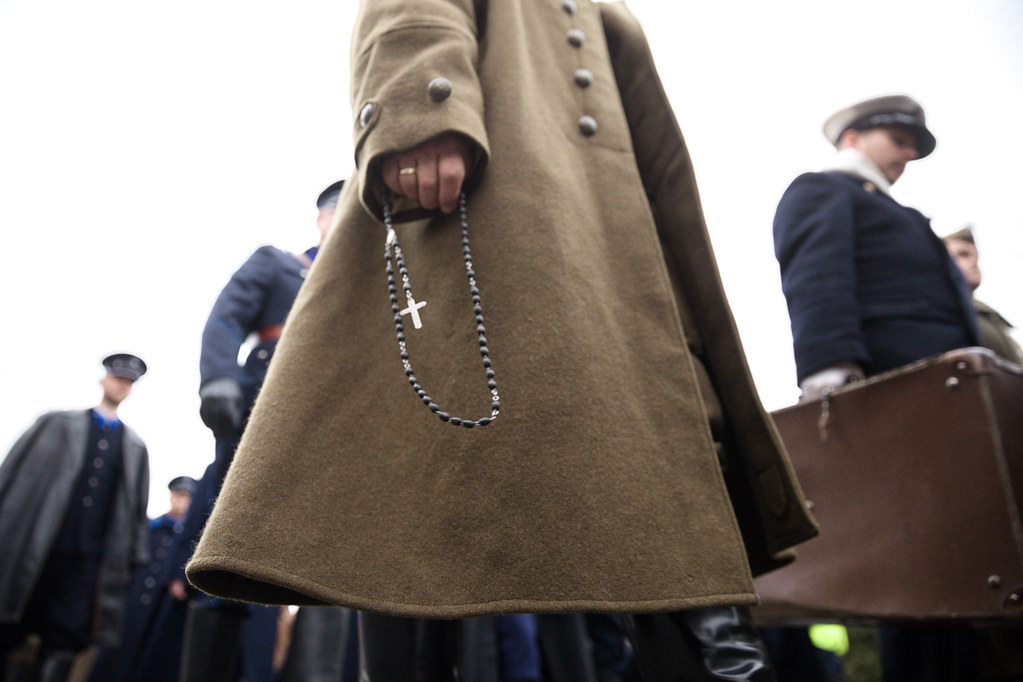 A Polish Army officer with a rosary in his hand. Poland is a fervently Catholic country, and that faith is constantly reflected in the memory of its martyrs killed by communism and nazism. 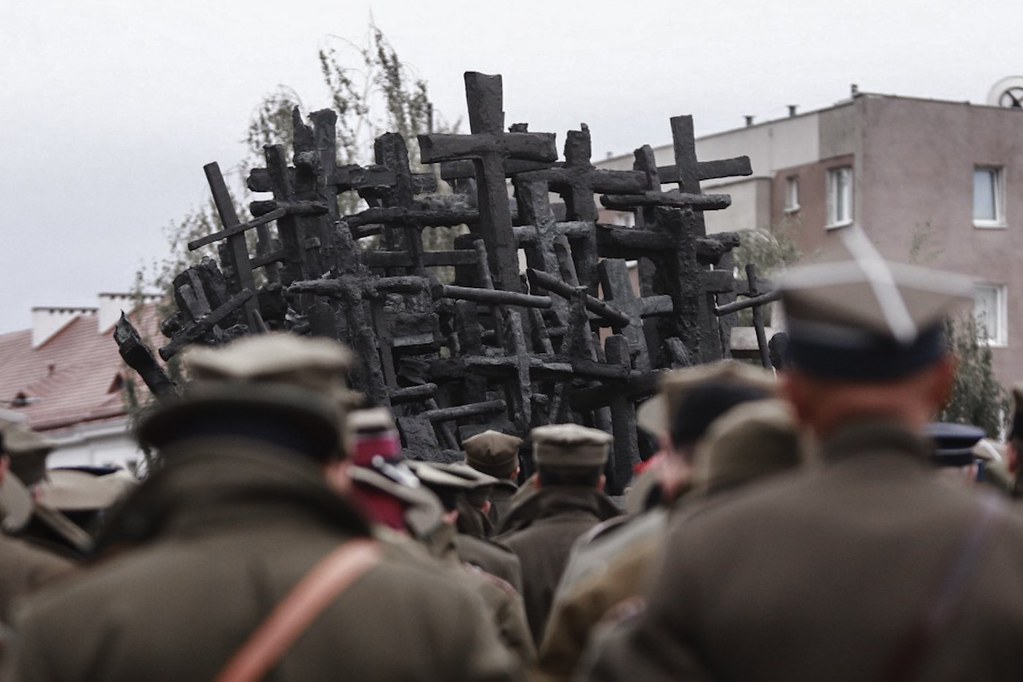 Upon reaching the Monument to the Fallen and the Murdered on Muranowska Street, the March stops. There, the Soviet guards tie the hands of the Polish prisoners behind their backs and bring them to their knees. 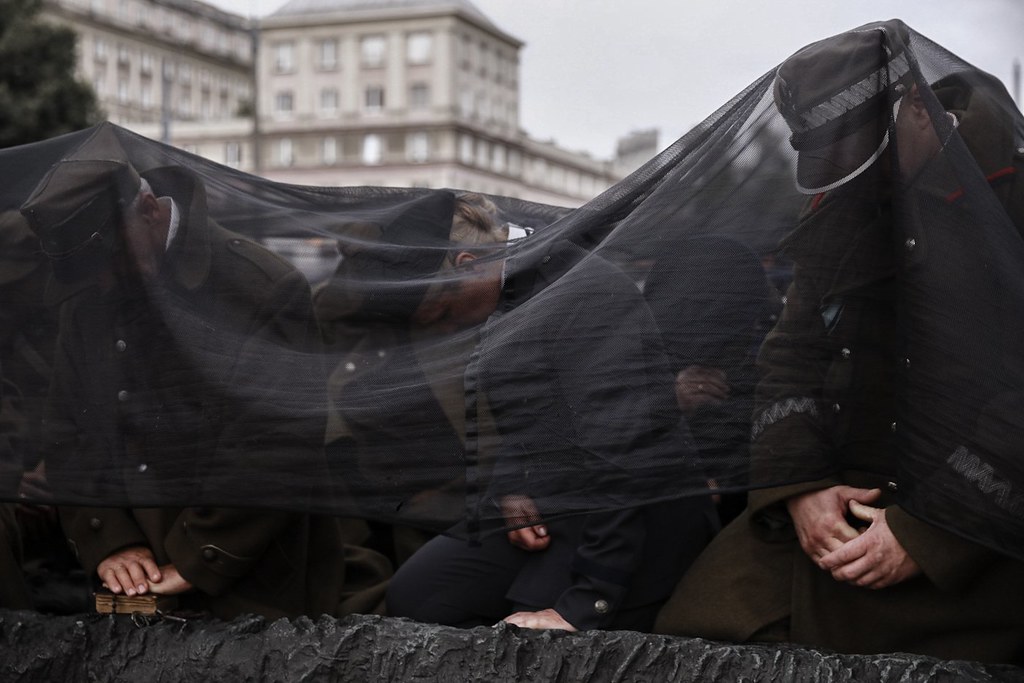 The black veil of death is drawn over the prisoners, representing the moment of execution. One by one, Polish officers were shot in the neck in Katyn by members of the Soviet NKVD. With the veil over their heads, a solitary trumpet sounds the “Śpij kolego”, the funeral bugle for the Fallen of the Polish Army. 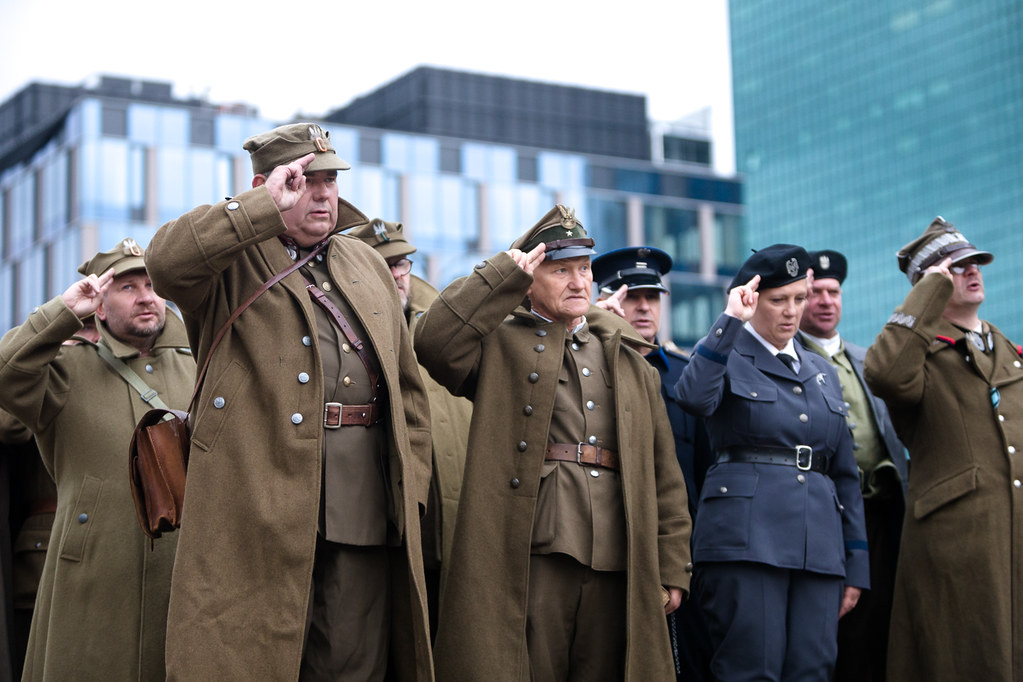 The black veil is then removed. The reenactors stand and sing the Dąbrowski’s Mazurka, the Polish national anthem. Its first two verses embody the spirit that has motivated the Polish people during so many difficult moments, in their struggle against the two great totalitarianisms of the 20th century: “Poland has not yet perished, so long as we still live.”

As you can see, among the reenactors representing the murdered there is a woman: she plays the role of Lieutenant Janina Lewandowska, a pilot in the Polish Air Force. She was 32 years old and the only woman killed in Katyn.

I leave you, without further ado, with the presentation video of the March of Shadows published a few days ago by the Institute of National Remembrance on its YouTube channel.

In the video, the voice of the granddaughter of one of the murdered is heard: “My grandfather loved Poland since he was little. Poland, which was not present on the map” (because until 1918 the country was disappeared due to the Third Partition of 1795, which divided its territory between Austria, Prussia and Russia). “My grandfather was shot on April 10, 1940. His identification number was 100. He was identified by his Virtuti Militari documents” (the highest Polish military decoration). A second male voice adds: “They died because they did not betray Poland, they did not deny it.” Again, the granddaughter of the murdered in Katyn adds: “And we owe them something very concrete: Freedom.” Again, the male voice adds: “Anyone who participates in this march, I believe that everyone lives it individually, uniquely. Those who go for the first time are shocked by the way it ends. Rest their shadows.”