Some do not know it, but the Internet and social networks are one of the current scenarios of a way of waging war based on propaganda.

An alleged British brochure published by a Spanish tweeter

Today at 15:24 CET, a Spanish Twitter account posted a message with the following text: "In the UK children are taught not to be afraid of pedophiles, but to be friends with them. There is only one way to act against them and you know which one is". The message included several photos of a brochure in English entitled "What to do if a stranger comes up yo you on the street?" The photos show that this brochure encourages children to trust strangers and not call them "pedophiles" (saying that the word can be "offensive"). 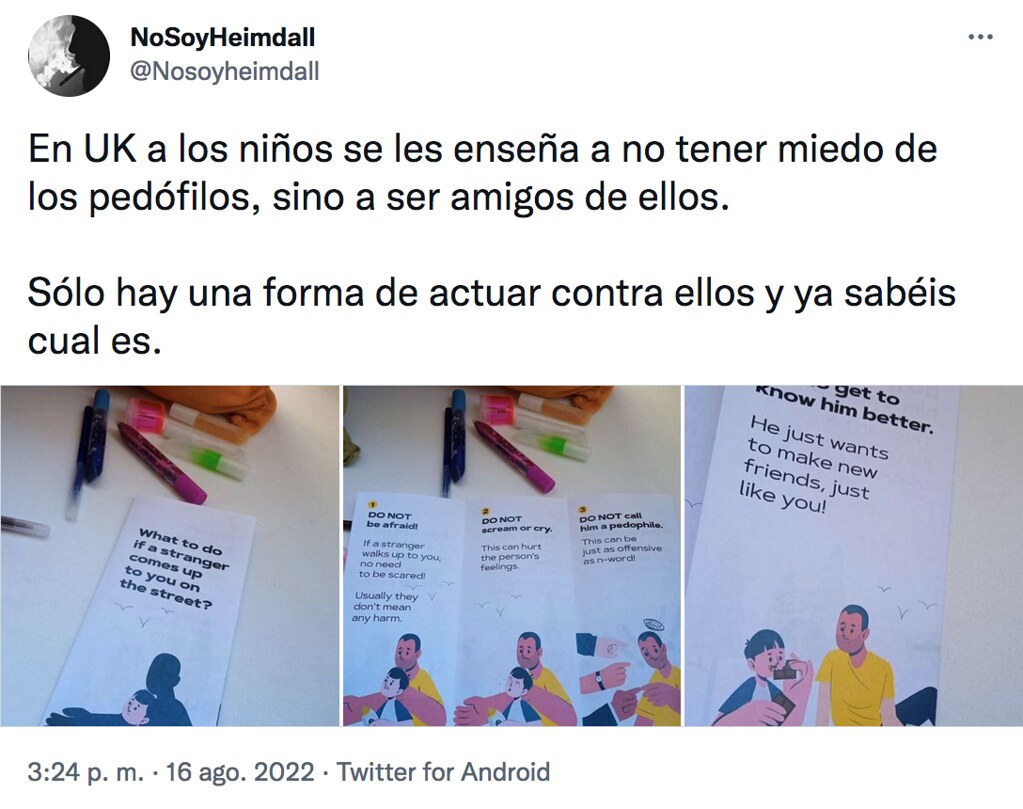 The message spread quickly. Although the account that posted it (created in April 2022 and issues pro-Russian messages) does not reach 2,000 followers, three hours after its publication it had already been shared by more than 100 Twitter accounts. Many, scandalized by what the photos showed, shared that tweet without verifying it.

The first detail that caught my attention in the brochure is that it does not show any logo or credentials of the entity that has published it. In fact, beyond the language, there is nothing to indicate that this prospectus has been published in the UK. Also, the brochure is a triptych, but only five of its six sides are shown. Where is the sixth side? Why hasn't it been shown?

Some images that are spreading Russian websites and Internet users

Google allows you to search for the source of an image. Introduje en el buscador una de las imágenes de ese folleto y, casualmente, . There is not a single British source, something curious. Finally, I found a Russian website that showed all six sides of the brochure. The sixth face encourages children to invite that stranger into their home. It's complete nonsense, and perhaps that's why most broadcasters of those images have omitted that one, since it subtracts credibility from the montage.

Significantly, no logo or credential indicating who has published it appears on any of the sides of the brochure. In two of the photos the lower stripe of the corresponding face is hidden. Obviously,if this brochure were from an official institution, its broadcasters would be the first interested in showing the logo. But there is nothing like that. It is a brochure that could have been made by anyone and in any country. And coincidentally, virtually all of the broadcasters are Russian or pro-Russian websites or social media accounts.

The source of these images is a Moscow website

Finally, I found the oldest source of these images: the Russian website aftershock.news, based in Moscow. It is a website that collects alleged information from various countries. The publisher of that information, released this Monday at 09:50, signs as "Asgard" next to a German flag. After showing the photos, Russian text appears, stating: "In the UK, children are taught not to be afraid of pedophiles." After of citing the messages of the brochure, the text adds: "This brochure is distributed in British kindergartens".

However, Google entering the brochure title not a single result appears That pamphlet is distributed in UK kindergartens and no scandalized family has written anything about it? Hasn't it appeared in the media either?

A disinformation campaign to discredit the West

Everything points to the fact that we are facing another new Russian disinformation campaign. It is not the first nor will it be the last, and like others that have been launched from Russia, its purpose would be to discredit the countries that are helping Ukraine, presenting the West as something depraved and monstrous, to reinforce the evil image that Russian citizens have of Western countries after many years of propaganda like that.

Looking abroad, the campaign would seek to influence the Western public in favor of Russia, presented by Russian propagandists as a spiritual reserve against a corrupt West (despite the fact that Russia has sky-high abortion rates and its troops are committing all kinds of atrocities in Ukraine). Of course, many will swallow that montage. After all, there are many people who out of affinity believe anything, no matter how crazy, and in Moscow they take advantage of that.