The terrorist attacks resulted in 23 dead and dozens wounded

Spain 1933: when the far-left derailed three trains after a right-wing electoral victory

The day before yesterday was the anniversary of some very serious events that occurred on Saturday, December 9, 1933: three terrorist attacks against passenger trains in Spain, which ended in tragedy.

On November 19, 1933 the first general elections were held in Spain in which women could vote. Perhaps in anticipation of the feminine vote tilting the electoral balance to the right, in July of that year the Republican Parliament -dominated by the PSOE (socialist) and other leftist parties- had approved an electoral reform that clearly benefited the most voted parties. However, a month before the elections a coalition was formed, the Union of Right and Agrarian, promoted by the main party of the right, the Spanish Confederation of Autonomous Right (CEDA), and that grouped the Agrarian Party, the monarchists of Spanish Renovation, the Carlists of the Traditionalist Communion and other smaller parties. This right-wing coalition won at the polls with 40.57% of the votes and 197 of the 473 seats of the Parliament. The radicals of Lerroux, who had formed a centrist coalition, were left with 138 seats. The left wing, which came divided in the elections and facing a call from the anarchists of the CNT to abstention (in protest at the massacre of Casas Viejas ordered by the government of Manuel Azaña in January of that year), got 100 seats, 59 of them for the PSOE, which lost almost half of the seats obtained in 1931.

The bad lose of the left wing: the PSOE threatened with "a civil war"

The electoral result was a blow for the left wing, which had assumed the idea that only she had legitimacy to govern in the Second Republic. In fact, the new regime had been configured in a sectarian manner, damaging rights and freedoms to impose the dictates of the left wing. That sectarianism, in fact, turned against its authors, because the authoritarian tools with which the left had endowed itself to govern - especially the Law of Defense of the Republic of 1931, which established a wide governmental censorship - could now be in the hands right wing. The left wing, which was already promoting a totalitarian rhetoric (starting with socialists and communists, who openly proposed a "dictatorship of the proletariat") began to make threats against the winners of the elections. A few days before the elections, already foreseeing a victory to the right wing, the president of the PSOE, Francisco Largo gave an incendiary speech at a socialist meeting held in Don Benito (Badajoz), which was published by the party's official newspaper: "We are going legally towards the evolution of society. But if you do not want to, we will make the revolution violently. This, the enemies will say, is to excite the civil war. Let's put ourselves in reality. There is a civil war."

The express train 204 from Bilbao to Zaragoza, derailed in Zuera (Zaragoza) at three in the morning of December 9, 1933, because of an anarchist sabotage (Photo: newspaper Ahora)

The pressures made a dent in the President of the Republic, Niceto Alcalá Zamora, who entrusted Lerroux with the formation of a government despite not being the winner. To give us an idea of ​​the pressures received, Alcalá Zamora acknowledged in his memoirs that the Minister of Justice, the Socialist Juan Botella Asensi, "proposed the signing of a decree nullifying the elections", despite the fact that the elections had been legal. In turn, the Minister of Industry and Commerce, the radical socialist Félix Gordón Ordás, proposed to dissolve the newly elected Cortes. Diego Martinez Barrio, then acting president, pointed out in his memoirs that two days after the elections he received a visit from former President Manuel Azaña (of Republican Action), accompanied by former Minister of Agriculture Marcelino Domingo (Radical Socialist) and former Minister of the Interior Santiago Casares Quiroga (Galician Republican Party), to ask him to stop meeting the new Parliament and form a republican government of the left to call new elections. It would have been an undercover coup d'état.

An anarchist coup that resulted in a wave of terrorism

On December 8, 1933 the new legislature was opened in the Parliament. That same night, at noon, the anarchists of the National Confederation of Labor (CNT) declared a "revolutionary strike", a coup d'état to impose libertarian communism against the outcome of the elections. Anarchist groups unleashed a wave of violence and terrorism throughout Spain, with bombings, burning of churches, factory fires, attempted assaults on Civil Guard barracks, attacks on infrastructures and telegraph and telephone lines, etc. The Socialists of the PSOE and the UGT were left undecided: they did not want to disavow the anarchists so as not to create division among the workers' forces, but neither were they favorable to join the coup, at least until they were able to verify whether it was successful or not. As pointed out by Abc on December 12, 1933, the day before the executives of the PSOE and the UGT were gathered until dawn to decide their position before the anarchist coup. Finally they issued an ambiguous statement, saying that they had no participation in that movement, but without condemning it and blaming the government "for its contempt for social demands." Did they refer to the demands of certain groups to ignore the outcome of the elections?

More images of the derailment of express train 204 in Zuera (Zaragoza). The anarchist attack caused eleven wounded, one of them seriously (Photos: newspaper Abc)

At eleven o'clock on the evening of the 8th, four bombs had already exploded in La Coruña in as many electrical transformers in Orense Square, Pontevedra Square, the port and Marina Avenue, leaving the city in darkness. The coup leaders cut all telephone calls and power lines in various locations. In Logroño they confronted by shots with the security forces, killing a civil guard, and in Zaragoza they set fire to the convent of the Capuchinas, and when the firemen came to extinguish the flames, the anarchists gunned them with a pistol and set fire to the firefighters truck. In the Aragonese capital, the coup plotters also shot a 78-year-old man who wanted to remove a bomb that the anarchists had placed at the entrance of a church. A confectioner, a resident of the Zaragoza street of Manuela Sancho, was shot dead when he simply peeked out on the balcony to see what was happening. That day there were three dead in Zaragoza because of the coup, in addition to many wounded, including several agents of the Assault Guard who wanted to confront the coup plotters. In Calatayud the coup plotters set fire to the Church of the Virgen de la Peña. A new civil war was brewing.

The anarchist attacks against trains in Briones, Zuera and La Coruña

That same night, the coup leaders launched to try to cause train derailments. According to the newspaper Ahora on Sunday, the 10th, in Briones (La Rioja), the 831 express train was the victim of a sabotage, derailing its locomotive and nine carriages without causing deaths. In Calatayud (Zaragoza) the coup plotters blew up two railway bridges, which forced the express mail from Madrid to Barcelona to stop. In Zuera (Zaragoza), near the station, the coup leaders lifted a railway line and cut the telegraph wires. Because of the sabotage, at three o'clock in the morning the locomotive and five wagons of the express train 204 from Bilbao to Zaragoza derailed, resulting in eleven wounded, one of them seriously wounded. The attacks on the trains continued in the following days. For example, Abc reported a shooting on a train near the city of La Coruña. The convoy went to Caspe when it began to receive shots, being hurt the machinist and the stoker. 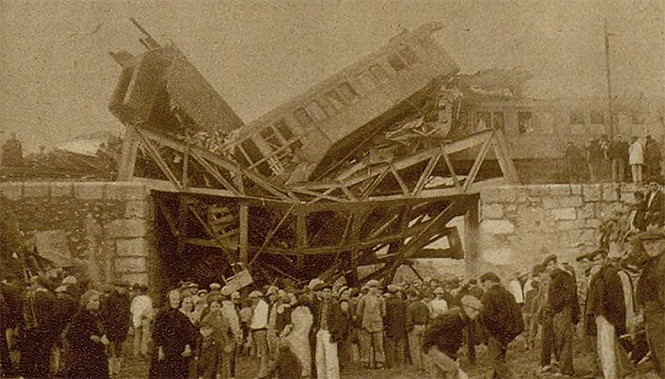 The express 702 Barcelona-Seville after its derailment in the ravine Puig (Valencia) on the night of 9 to 10 December 1933, because of an anarchist attack (Photo: newspaper Ahora)

The attack against the "El Sevillano" express: 23 dead

However, the most serious event of all occurred on that night from December 9 to 10, 1933. The anarchists exploded several very powerful bombs on a railway bridge over the Puig ravine, between Puzol and Puig stations (Valencia), on the Valencia-Tarragona line, and they lifted the roads located before the bridge. At around eleven o'clock in the evening, the 702 Barcelona-Seville Express arrived, nicknamed "El Sevillano" and well known for being the way used by many of the Andalusians who emigrated to Catalonia. Because of the attack, the locomotive and five wagons derailed. Among the units most affected by the disaster were two third-class cars, which transported the less affluent travelers, who were the hardest hit by the attack. 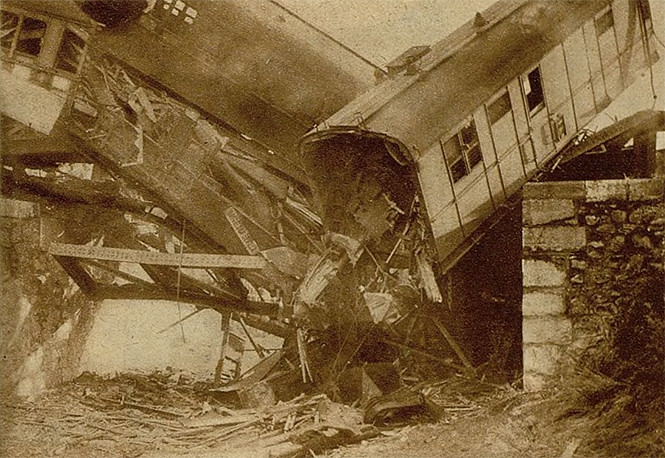 Another image of the derailment of the express 702 Barcelona-Seville in the ravine of Puig (Valencia). The anarchist attack caused 23 dead and 38 wounded and mutilated (Photo: newspaper Ahora)

The scenes provoked by the attack were Dantesque. One of the first class carriages was literally embedded in one of the third-class carriages. In his issue of December 12, the newspaper Ahora recounted the rescue of a waiter train, Vicente Planells, which resulted with both legs completely fractured. When his companions transferred him to a first-class carriage, he shouted: "My children! My six children! The children I have and I have run out of bread for them!" The newspaper also recounted how in one of the third-class cars "a woman's leg has been discovered". That same day Abc gave more details of the horror, noting that a boy "turned out with his legs cut off". The terrorist act caused 23 deaths and 38 injured and mutilated.

A coup d'état with more than a hundred dead

The coup d'etat finally forced the acting government to declare a state of war and mobilize the army on December 14, when the coupists had been committing all kinds of atrocities for several days. Because of the commotion that caused the wave of anarchist terrorism in the public opinion, the PSOE ended up condemning the coup attempt of the CNT (in October of 1934 it would be the PSOE itself that launch a coup, after the entry of several ministers of the CEDA in the government). The anarchist coup resulted in more than a hundred deaths among the coup plotters, the forces of order and the civilian population, in addition to many wounded. Finally, the coup leaders were seized 1,000 small arms, 825 rifles, more than 2,600 bombs and more than 21,000 rounds of ammunition, being arrested the leaders of the rebellion, including the anarchist leader Buenaventura Durruti. Curiously, few remember today as much of that blow as of the serious attack that caused a tragedy in the ravine of Puig. I hope this post serves to pay tribute to the victims of that savagery.

(Main photo: newspaper Ahora. The express train 831, derailed in Briones (La Rioja) because of an anarchist attack on December 9, 1933)