The executive once again reveals the farce of its "democratic memory"

Spain has the only government in the European Union with communist ministers. Likewise, the Communist Party of Spain (PCE) has 4 deputies and 2 MEPs.

This January 1, to start the year, that totalitarian party – to which the ministers Alberto Garzón and Yolanda Díaz belong – published this message celebrating the 62nd anniversary of the establishment of the communist dictatorship in Cuba: 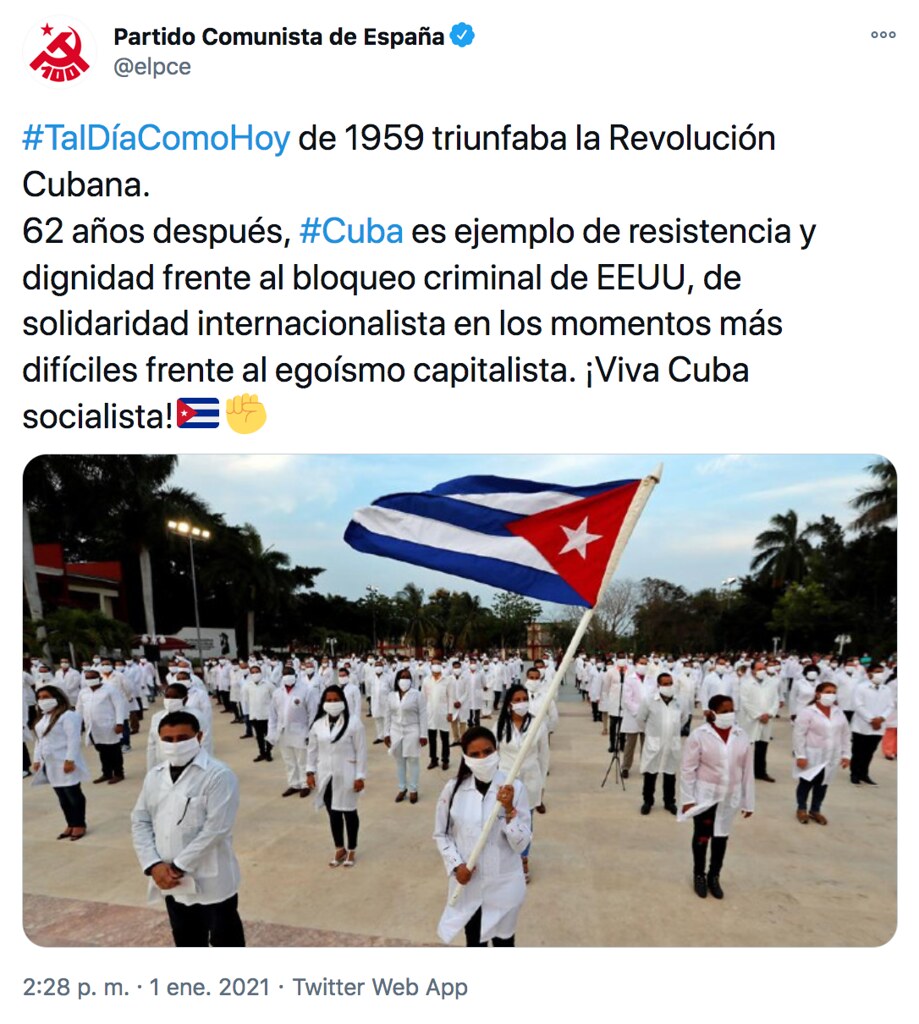 The youths of Izquierda Unida (United Left), one of the members of the United We Can coalition that is part of the coalition government, also joined in the celebration of the anniversary of that tyrannical regime: 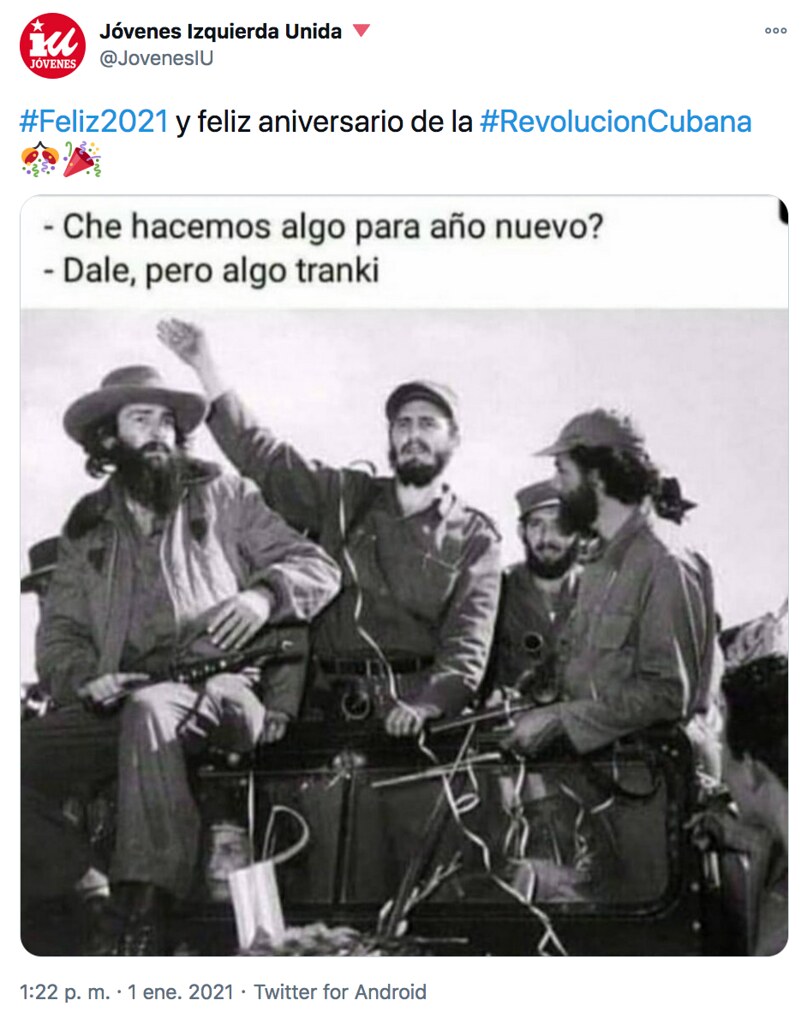 It is not the first time that the PCE and Izquierda Unida have launched themselves to support a communist dictatorship. In April 2020, the PCE called to follow the “example” of the dictator and genocidal Lenin, whose terror regime murdered one million people in six years for political reasons. It is not surprising that the PCE and Izquierda Unida are very displeased with the parliamentary monarchy in Spain. Judging by what they support in Cuba, they don’t mind the idea of a monarchy, but rather that we have one that is democratic and parliamentary.

Cuba under communism: 62 years of oppression and misery

Like other times, we must remember what that anniversary means: Cuba has been subjected to an undemocratic one-party regime for 62 years, without free elections and with constant and systematic violations of human rights, including harassment, persecution, detention and torture. to those who oppose this tyranny, which has 137 political prisoners in its jails.

To this must be added the misery in which the Cuban people are plunged as a result of this criminal regime. The average salary in Cuba is the lowest in Hispanic America: only $ 30 a month. To give us an idea, the one for Spain is $ 1,574.56. While Cubans live in poverty because of the communist dictatorship, their leaders get rich by stealing from the people: for example, the dictator Fidel Castro accumulated a fortune of 900 million dollars at his death. A scandalous situation that has been repeated in many communist dictatorships. That this regime is the benchmark of the PCE is an announcement of what the communists want to do in Spain.

On the other hand, we must remember what the socialist Carmen Calvo said in September 2020 about her law of “democratic memory”: “This law will prohibit all spaces where the glorification of dictatorships occurs.” Izquierda Unida, to which the PCE belongs, issued a Unidas Podemos coalition poster with this slogan: “No more exalting dictators.” 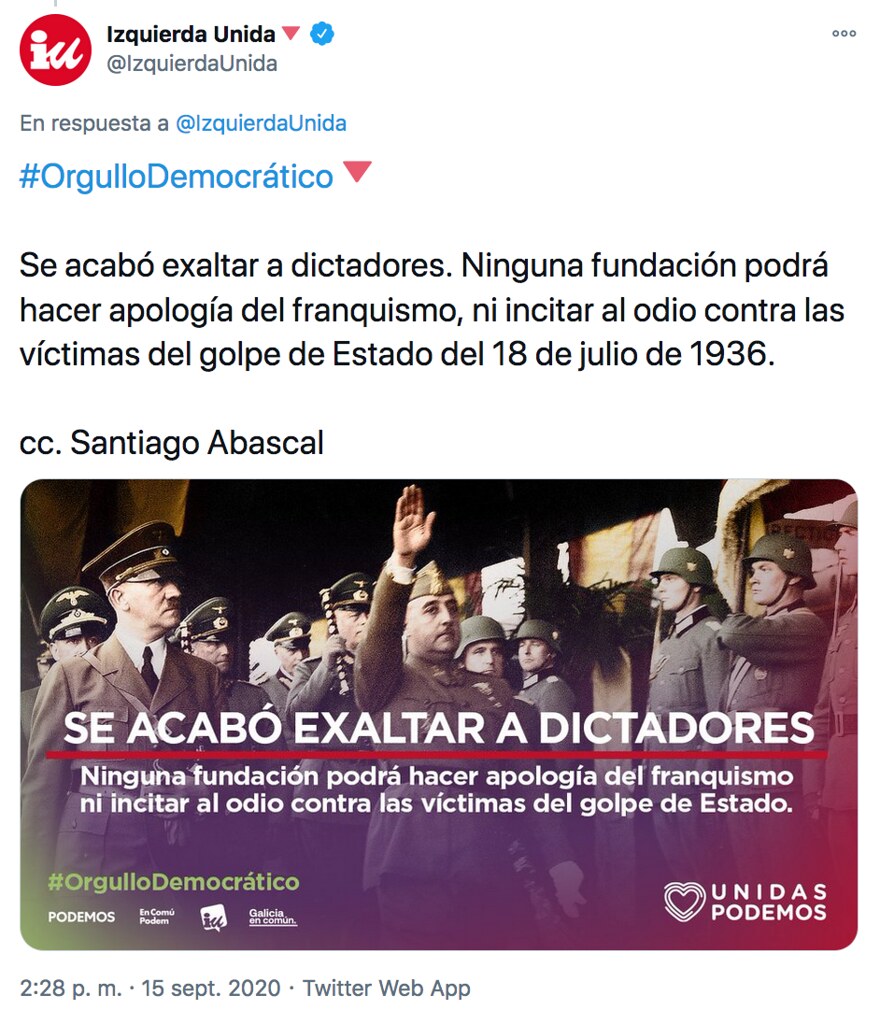