Only a few days after inventing a new nonsense not to say “women”, the UN provokes a new controversy with a message published on Twitter.

The controversial comment was released this Friday by the account of the UN headquarters in Geneva: “UN #HumanRights experts express profound concern over a recent statement by the US Attorney-General describing #Antifa and other anti-fascist activists as domestic terrorists, saying it undermines the rights to freedom of expression and of peaceful assembly in the country.”

The message, which has received a flood of criticism on that social network, includes an image of the flag created by the Stalinists of the Communist Party of Germany in the 1930s, when they tried to violently overthrow the Weimar Republic using violence through gangs of thugs from the “Rot Front”, just as the National Socialists did with the thugs of the SA. 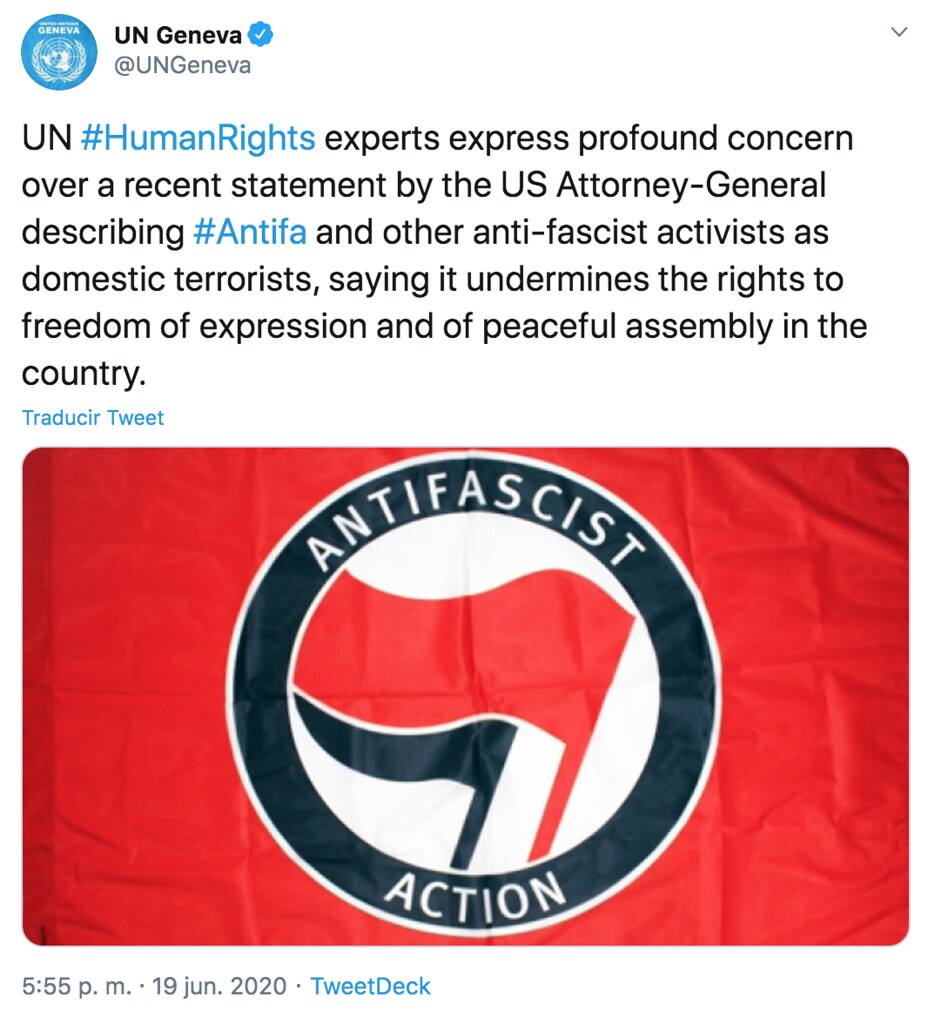 Violence and crimes that the UN pretends to ignore

Does UN Geneva’s concept of “freedom of expression and of peaceful assembly” include the looting of shops, the destruction of monuments, the murder of 10 people and other acts of violence that extremists have been leading in recent protests in United States?

Of course, the UN knows these facts, since they are in the public domain, but it pretends to ignore them, putting far-left activism above the victims of that terrorist violence. In any case, if the UN considers that the “Antifa” extremists are not terrorists and that their violent actions are legitimate and deserve to be supported, why not lead by example and invite them to Geneva to vandalize its headquarters? Or do it consider such acts of violence “freedom of expression and peaceful assembly” only when their victims are peaceful citizens of the United States trying to defend their businesses?

The UN and Human Rights: 68 convictions to Israel and none to Venezuela, China and Cuba

On the other hand, it is worth asking which “UN human rights experts” does this account refer to? Recall that 15 member countries of the UN Human Rights Council persecute Christians and 7 of them punish homosexuality with the death penalty. Let us also remember that this Council carries 68 convictions against Israel and none against dictatorships such as Venezuela, China and Cuba. In fact, the last time that the UN Geneva account cited Cuba in a critical tone was in March 2017. In that dictatorship there are still political prisoners and human rights continue to be violated daily, but that does not seem to worry the “experts” from the ONU.

+ UPDATED 6.21.2020 8:25am: After receiving an avalanche of criticism (the tweet already had more than 27,000 responses a few hours ago), UN Geneva has deleted its message of support for “Antifa”. I have placed a screenshot of the deleted message above. You can see a copy in Archive.ph.