Jack Dorsey's company considers this statement to be "incitement to hatred"

The intolerance of progressivism towards the truth is reaching purely grotesque extremes, as seen today on Twitter.

Twitter considers that affirming this biological fact is “incitement to hatred”

As La Nueva Razón has pointed out, today the professor of Philosophy of Law and deputy of Vox party Francisco José Contreras has been censored by Twitter for affirming the following in a tweet: “A man cannot get pregnant. A man does not have a uterus or ovules.” Twitter has considered that the mere affirmation of this biological fact is “incitement to hatred”, for which it has imposed a 12-hour block on Contreras on his account, as the deputy himself has denounced on his Facebook account: 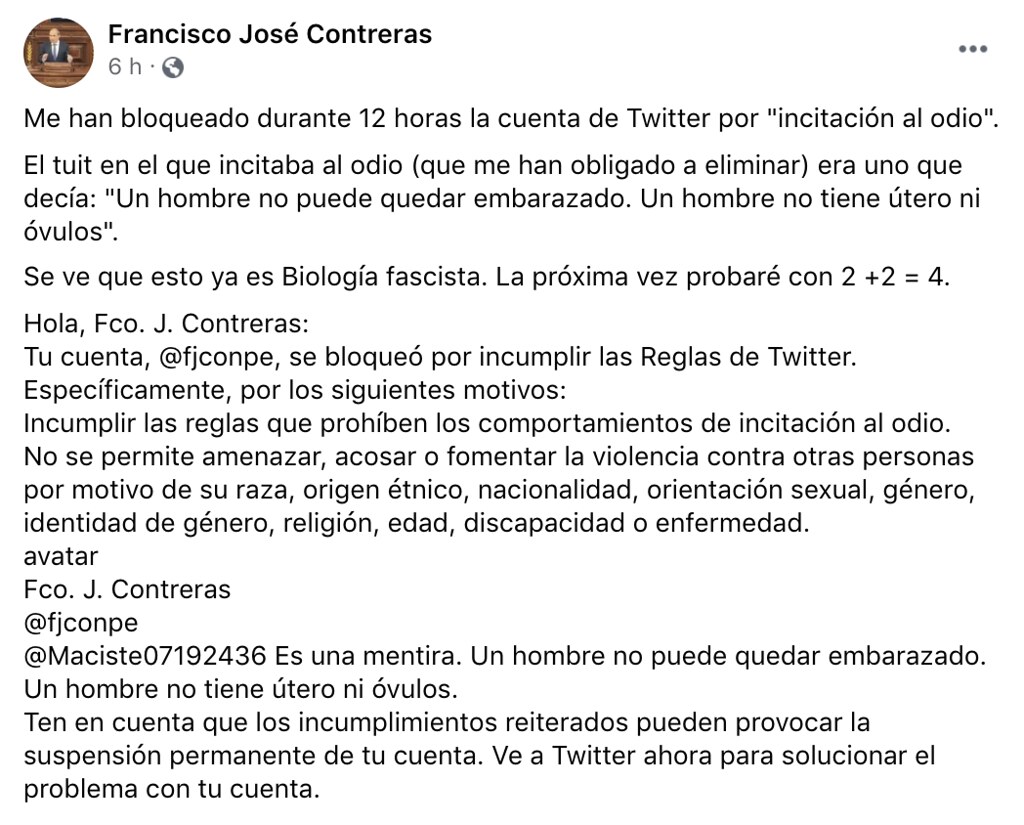 “It is seen that this is already fascist biology. Next time I will try 2+2 = 4”, the deputy of Vox has ironized, whose case is a new episode of ideological censorship on the part of a social network with a clear leftist bias.

The treatment that Twitter is giving this conservative party is especially scandalous. Last February, at the gates of regional elections in Catalonia, Twitter censored the Vox account in a new interference by the American company in an electoral process in another country. Twitter’s excuse in that case was that stating statistics showing the high percentage of criminal complaints against Maghrebis was also “incitement to hatred.” Apparently, Twitter believes that statistics, like biology, should be censored if at any time they contradict the ideological dogmas of progressivism.

That social network has allowed serious threats against Vox

However, in the days following that case of censorship for ideological reasons, Twitter tolerated messages from left-wing extremists who threatened to attack the president of Vox, Santiago Abascal, and also messages threatening to attack and kill other members of that party. Apparently, for Twitter to affirm biological or statistical facts is “incitement to hatred”, but it is not threatening to kill members of a conservative party.

Twitter’s efforts to violate the right to freedom of expression to impose the ideological theses of the left has already provoked the rejection of some governments. In December, Poland announced a law to criminalize ideological censorship on social networks, noting that “social networking sites may not, at their discretion, delete entries or block user accounts, provided that the content posted on them does not violate Polish law.” In January, Hungary also announced a Polish-like law in defense of freedom of expression on social media, expressly criticizing the censorship of Twitter and Facebook against “Christian, conservative and right-wing” views. And now, too, against the mere assertion of biological facts.